The Acer Predator Triton 500 impresses with its thin and light chassis. It offers a serious boost with a whole range of powerful components, including an 8th generation Intel processor and Nvidia’s new RTX 2080 Max-Q graphics card. There are several considerations here, such as under-average battery life and a relatively weak display. Still, overall, the Triton 500 has enough good things to make our list of best gaming laptops. Here is our Acer Predator Triton 500 Review.

I don’t know if it is the glowing Transformers-like Acer Predator logo in the center of the black aluminum cover or the overall slim frame of the Triton. Still, I had a definite feeling that the laptop would be transmogrifying at any moment. The aluminum chassis of the Triton alone does not make much impression, but it is the small things – such as the turquoise-lined vents and gates – that makes you appreciate this rig. I would recommend that you have a cleaning cloth handy because the onyx metal is a fingerprint magnet. 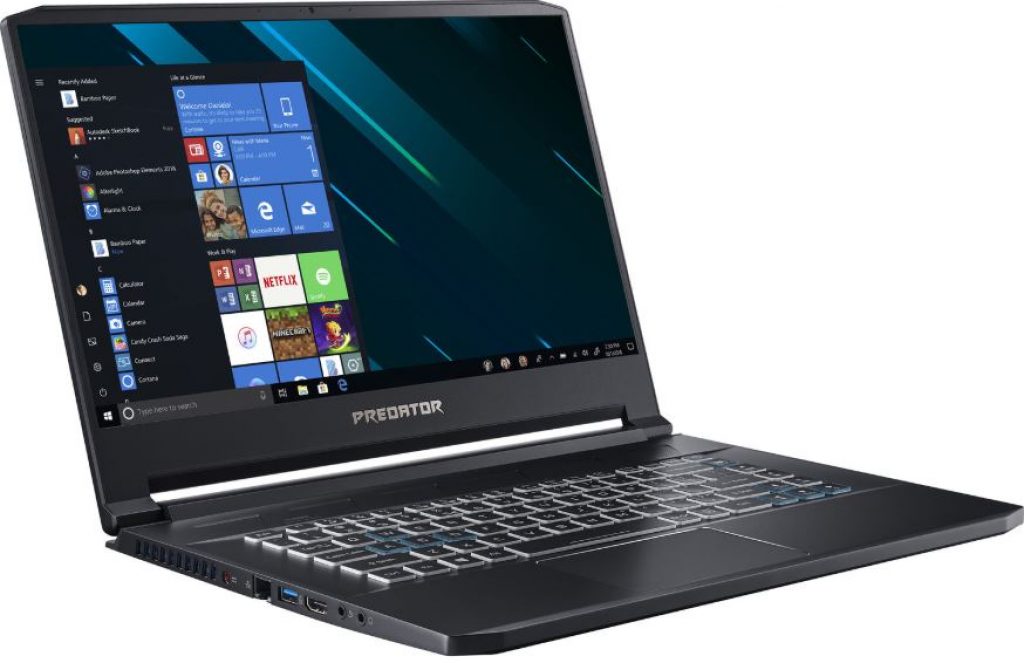 Acer continues the flourishing peek-a-boo game on the inside of the notebook, with specific keys in a semi-transparent plastic that serves to enhance the backlight of the teal. The touchpad also has a bit of glare, thanks to the chrome edges and the triangular vents on the top of the deck, which give the laptop a beautiful look. The Turbo button above the F1 and F2 keys refers to the power inside.

Slim but full, the Triton 500 – with its abundance of ports – is waiting to be turned into a mobile battalion. On the right, you have a few USB 3.1 ports, a Thunderbolt 3 port, a Mini DisplayPort 1.4, and a Kensington slot. That is enough to connect a few monitors and a mouse or two, but you still have a USB 3.1 port on the left in addition to an HDMI 2.0 port, Ethernet, and connections for a headphone, microphone, and power supply. 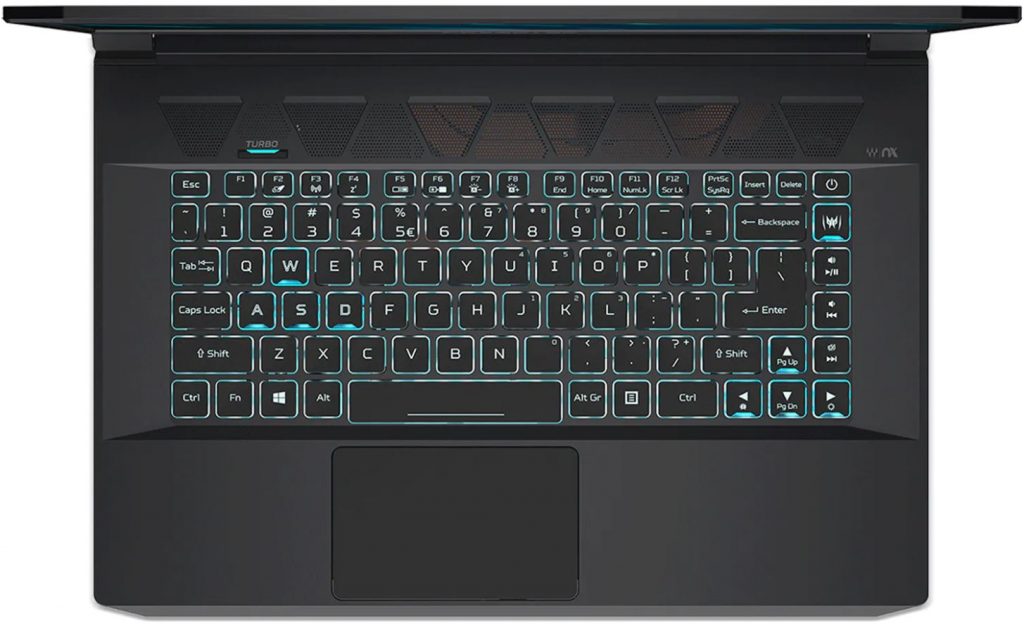 It is not a mechanical keyboard, but the keys of the Triton felt great while typing. The in-depth test result of 1.7 millimeters (minimum 1.5 mm) in combination with the 70-gram operation (minimum 60 g) felt like bouncing on a set of firm, rebounding mattresses. I hit 75 words per minute during the 10FastFingers type test, which is more than my usual 70 wpm. The 4.1 x 2.5-inch touchpad offers fast, smooth action with multiple gestures, including pinch, three-finger taps, and four-finger swipes. The lower corners of the touchpad provide springy feedback with a gentle click.

The view was just as beautiful (and bloody) during my “Battlefield V” playthrough. I stopped to admire the delicate snowflakes that dance in the jet-black sky and light up the iridescent green of the aurora borealis before I reached my way to my goal. I quietly crept to the base of the enemy and pulled out a guard with a throwing knife; his blood turned the snow-covered ground dark red. 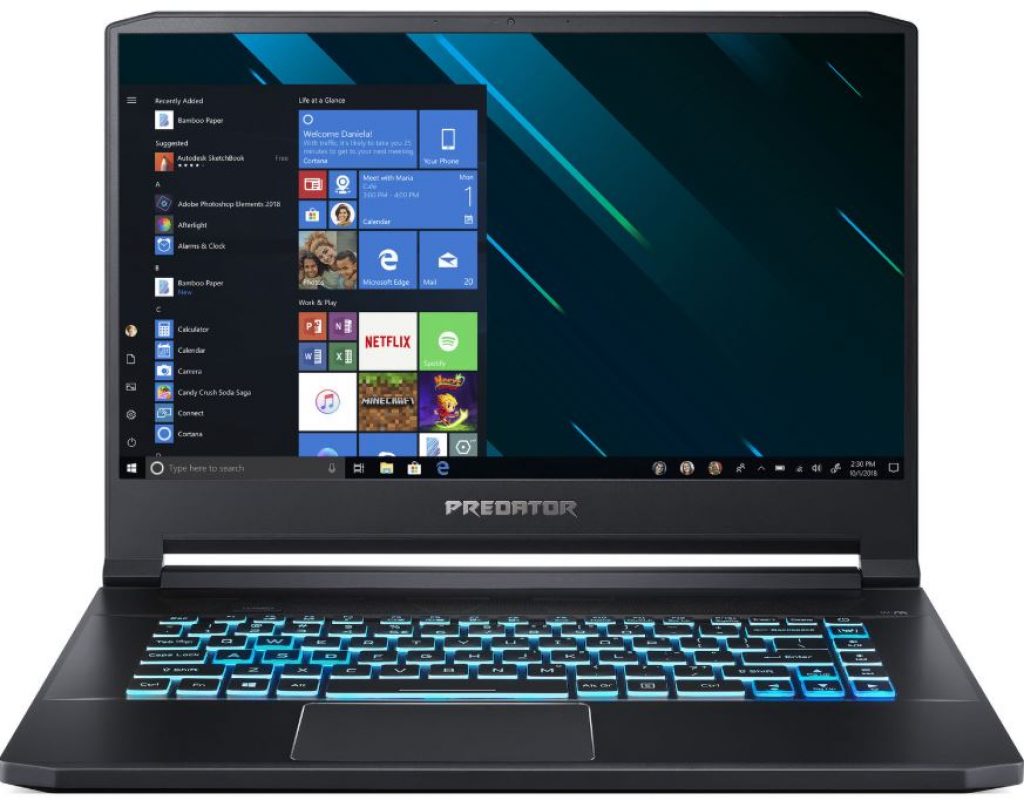 The notebook’s panel reproduced 117 percent of the sRGB color range, which is above our minimum of 100 percent, but below the average gaming average of 138 percent. The Razer Blade 15 and MSI GS65 Stealth reached 149 and 161 percent, respectively.

I could already see that the screen was a bit weak, so I was not surprised that the 277-nit result did not match the average of 281-nit. The Predator Triton 500 is better in this respect than the Blade 15 (262 nits) but does not beat the Stealth (339 nits).

The speakers of the Triton 500 are placed on the bottom lip of the laptop and are small but loud. Combined with the pre-installed Waves MaxxAudio and Acer TrueHarmony software, the notebook has been able to fill our lab with noisy, albeit somewhat busy, audio. Listening to the Cardi B and Bruno Mars “Please Me,” I loved the volume but was disappointed by the keyboards and synthesizers, which sounded distorted, and the barely low-end was also a let-down. The vocals of Cardi and Mars were clear but seemed a bit flat.

This is one of the few times that I recommend playing with the audio presets (Gaming General, Gaming FPS, Gaming Sports, Movies, Music, and Voice). The music preset is an absolute must when streaming music. When I started playing “Battlefield V,” the Gaming FPS setting put a little more emphasis on sound effects, making the gunfire and the explosions of battle a little more authentic. However, the violin accompaniment sounded far away.

Acer is the newest PC maker that participates in the RTX bandwagon. The company has the Triton 500, a fairly slim laptop, equipped with an Nvidia GeForce RTX 2080 Max-Q GPU with 8 GB VRAM, one of the most powerful graphics processing units available for a mobile system. In addition to the high frame rates, the powerful new RTX cards have the new Ray Tracing and DLSS technologies from NVIDIA, which mimic how light behaves in real life, resulting in realistic reflections and better graphics in general. 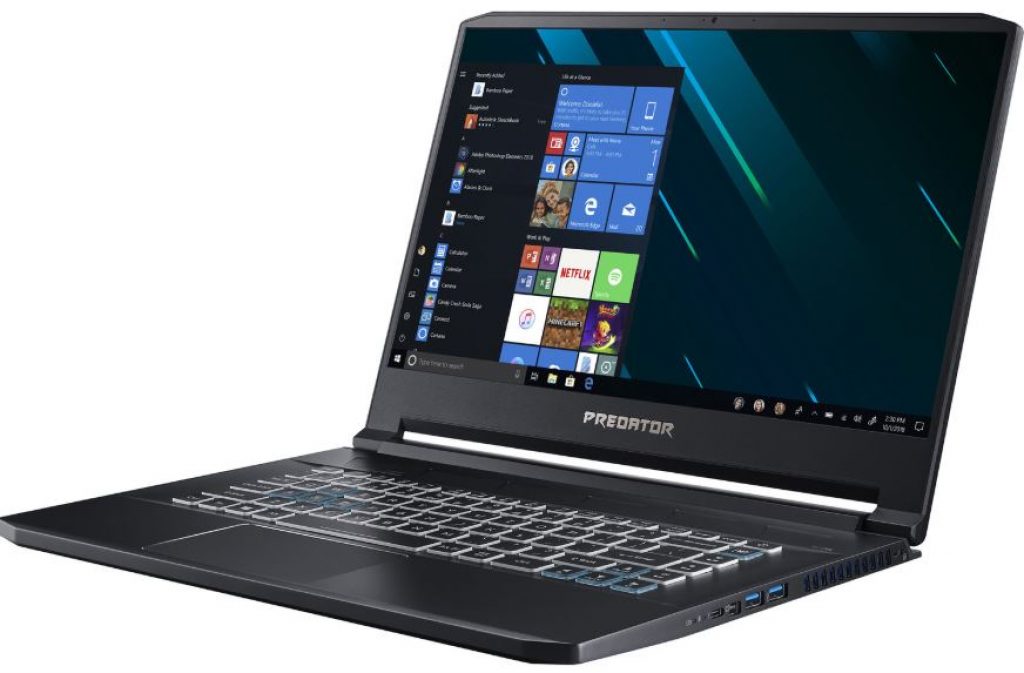 The Triton 500 was on an equal footing with its peers during the “Rise of the Tomb Raider” test, scoring 62 fps on Very High at 1080p. That is a frame below the average of 63 fps, premium gaming category, but was also in the range of the Blade 15 (60 fps, RTX 2070 Max-Q) and the MSI’s Stealth (65 fps, RTX 2080 Max-Q) with RTX 2070 and 2080 Max-Q GPUs. By using the Turbo function of the Triton 500, the laptop is essentially overclocked, giving the graphic display a serious boost. With this feature enabled, the frame rate increased to 69 fps.

The Turbo Bump was not so substantial in our “Shadow of the Tomb Raider” benchmark, because the laptop scored 68 fps compared to the 66 fps it scored without the feature turned on. Nevertheless, both scores exceeded the average of 54 fps and the 65 fps of the Stealth. When we performed the “Hitman” test, the Triton 500 delivered 86 fps at its standard-setting, which was below the 96 fps average, the Blade 15, and the Stealth. With Turbo switched on, the speed increased to 90 fps.

“Grand Theft Auto V” delivered one of the significant leaps in performance; the Triton 500 produced 60 fps on Normal and 82 fps on Turbo settings, enough to beat the 76 fps posted by the Razer Blade 15, the category average and the 77 fps achieved by the MSI Stealth. During the benchmark “Middle-Earth: Shadow of War,” the Triton 500 reached 80 fps, which was lower than the average of 87 fps and the 91 fps of the Blade 15; Turbo mode with 102 fps.

The Triton 500 is also a force that needs to be taken into account in the multimedia field, thanks to the 2.2 GHz Intel Core i7-8750H processor with 32 GB RAM. The notebook searched 35 Google Chrome tabs, some of which ran Twitch streams, Tweetdeck, and 1080p YouTube videos while I watched an episode of “The Dragon Prince” on Netflix. 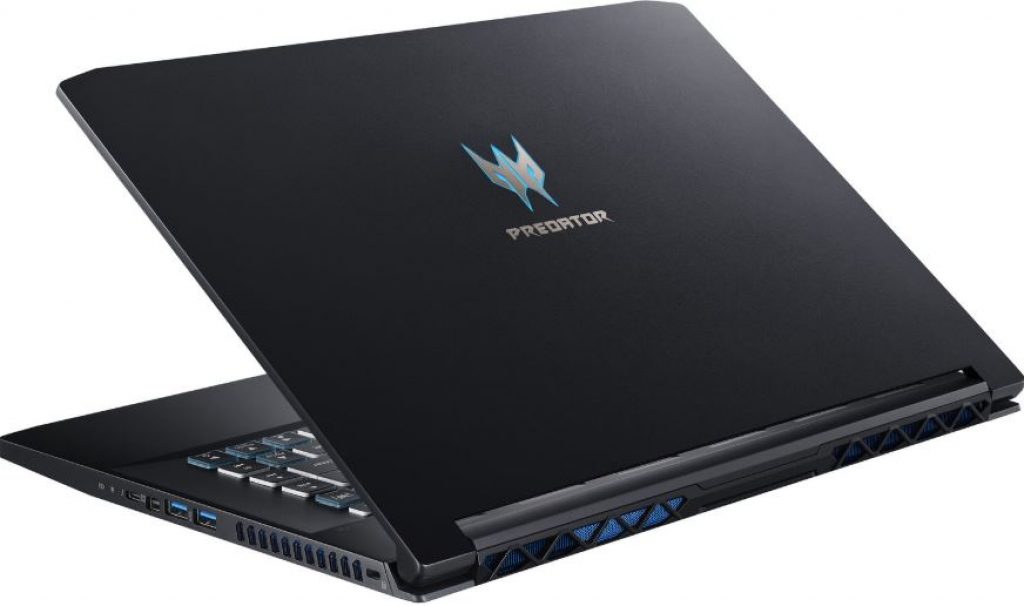 When we performed the Geekbench 4.1 overall performance test, the laptop scored 21,290, which is slightly less than the average of the gaming laptop. Armed with their 8750H CPUs, the Razer Blade and MSI Stealth reached 20,437 and 20,843, respectively.

In an attempt to keep the components of the Triton 500 not overheated, Acer uses a system with three fans in combination with five heat pipes. The fans use the company’s 4th generation AeroBlade system, which Acer claims have increased airflow by 45 percent. Despite all of Acer’s work, however, they are still fighting a fundamental problem: moving enough air to the components in a small, limited space. The results were mixed.

I spent 15 minutes shooting down enemy fighters in “Battlefield V.” When I was done, I checked the touchpad of the Triton 500, which reached 92 degrees Fahrenheit – slightly below our 95 degrees comfort threshold. The center of the keyboard and the base of the system reached 107 and 125 degrees, respectively. The chassis hit 120 degrees.

The fans were relatively quiet in normal mode, which is to be expected from a Max-Q system. But once you press the Turbo button to overclock the GPU, the fans get noisy. I used it in our open office layout and heard many comments about the sound. After a long cool-down session, we performed the test again, only this time with a 15-minute full-screen HD video. The touchpad, middle, and bottom measured 86, 91, and 101 degrees, respectively.

Gaming laptops are not known for their battery runtime, and the Triton 500 will not help change that picture. The laptop lasted only 3 hours and 4 minutes during our battery test, using WiFi on the web with a brightness of 150 nits. That duration is below the average gaming laptop of 3 hours and 20 minutes, but not much. The Acer survived the Stealth’s 2 hours and 29 minutes, but not the impressive series of the Blade 15 of 5 hours and 2 minutes.

From the alluring Acer Swift 7 to the bold simplicity of the Predator Triton 500, Acer may have locked the thin and light game. For $2,999, gamers get a seriously portable system that offers a great mix of graphics and overall power. And thanks to the Turbo option, you can squeeze even more power out of the GPU – if you don’t mind the roar of the fans.

But for a few hundred dollars cheaper, you can get the $2,649 advanced model of the Razer Blade 15, which is not as powerful as the Triton 500, but is slimmer, with longer battery life and a better screen; it also comes in a beautiful Mercury White aluminum chassis. However, if you want serious power in an attractive portable design, the Acer Predator Triton should be at the top of your list.