Compsmag is supported by its audience. When you buy through links on our website, we may earn an affiliate commission fee. Learn more
Reviews » 198X Review
Reviews

198X takes advantage of our love of the ’80s games and gives you a handful of short game vignettes wrapped in a simple story about the pain of growing up. The games themselves are more like ’90s SNES games than’ 80s arcade titles (albeit very handsome SNES games), but the 198X neon aesthetic (and of course the name) tries to evoke a sense of nostalgia for this period. Despite some beautiful tributes, it is unfortunately not a particularly transportive experience. This is our 198X Review.

198X features five ’80s faux arcade games to play through, and they’re short enough to wrap up the whole story, including the story sequences, in less than two hours. They are not precisely mini-games – they are framed as small pieces of full games that exist in the world of the story, the first few levels of five more significant experiences. Sequentially chained together through beautiful pixel-art cutscenes set to a synth soundtrack, these games make up the entirety of 198X’s gameplay.

The plot revolves around the “Kid,” who lives in a suburb outside of a big city. He watches the highway at night and is thinking of going out of town. He generally seems unhappy with his life until he discovers an arcade hidden in an old abandoned factory and figure out a sense of purpose and place among the machines and customers there. 198X has some of the same issues as Ernest Cline’s Ready Player One. 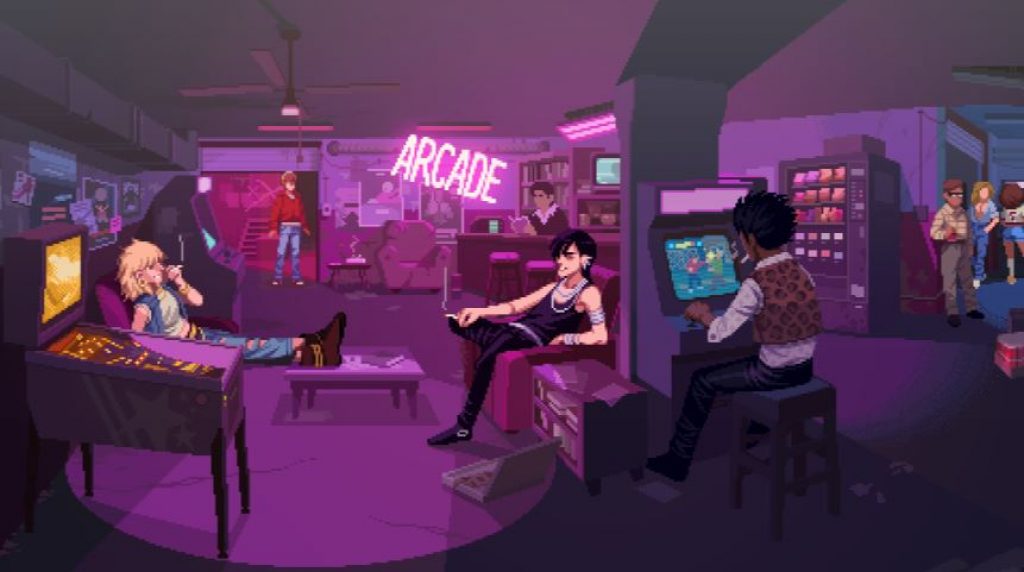 If the emphasis of that book that you’re a nerd is inherently irritating, then 198X’s faint reverence for arcades and youth is likely to have a similar effect. There is something very immature about the rendering of the Kid’s play and the way he talks about his idealistic childhood while providing limited insight into why things are making him so tricky now.

“When you go to high school, everyone gets brainwashed,” he says at one point, which is about as deep as the game to explore the difficulty of your teens. You don’t get enough insight into the Kid to get a sense of why this arcade is so important to him, apart from a few vague references to the fact that his dad is no longer there. Out of the five games you play in 198X, only two meaningfully touch the boy’s battle.

So playing through the five games in sequence doesn’t tell us much about the Kid’s private life, and there’s little real awareness of why they’re important to him, other than the general feeling that games are powerful and essential by default. Much of this story builds on your investment in the power of an arcade, and the game doesn’t bother much to tell you why this particular arcade and these specific games mean so much to the Kid.

Your first foray into the arcade comes via Beating Heart, a Final Fight-style fighting game with a simple two-button control system. It’s the most basic game included: you can hit, jump, or run a spinning kick, and if you die taking on the handful of enemy types, you can respawn immediately with no punishment. It’s a simple introduction, with an excellent midi soundtrack that fits the period and is reminiscent of the arcade classics it’s a tribute to. But it doesn’t offer anything exciting or unique in its mechanics, nor does it contribute much to the Kid’s story. 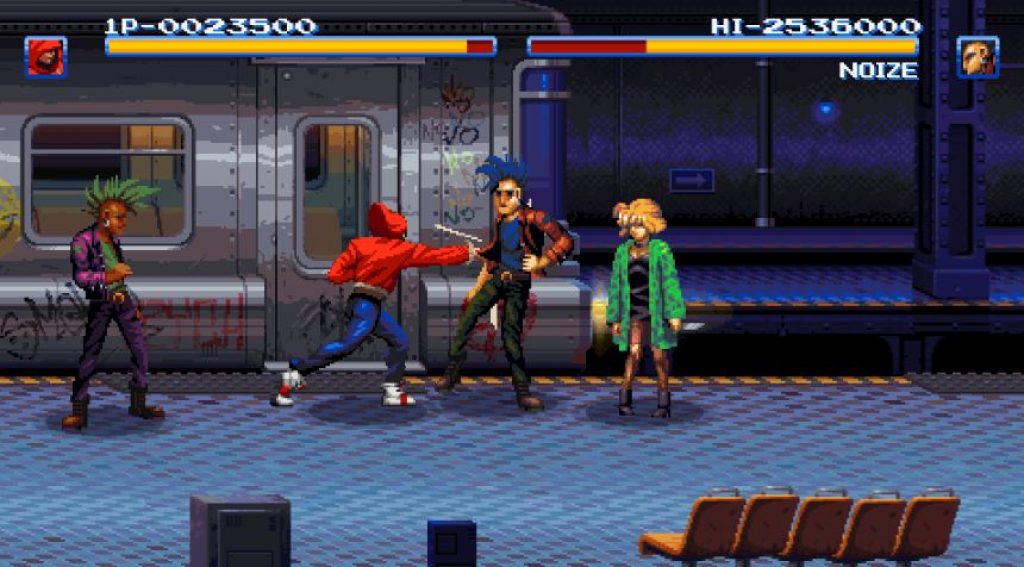 Next up is Out of the Void, a shooter inspired by R-Type that only runs for two levels. You fly from left to right, collect ship upgrades and fire regular and loaded shots to take down your enemies. It’s uninterrupted fun, if nothing spectacular, and things get pretty hairy in the second level. This is one of the most enjoyable games in 198X only because it feels pretty close to a decent arcade space shooter.

Unfortunately, it’s over very quickly, and while it’s relatively enjoyable, it’s certainly not as inventive or intense as the best games in the genre – the final boss, for example, is a pushover. A more challenging experience, or some unique mechanics, would have better represented the games of this era that we’re homesick for.

Next comes The Runaway, an OutRun-esque racing game that lacks the arcade classic’s sense of speed and whimsy. The lack of gear shifts and sharp angles makes this a bit of a nap, although it’s also the game in the collection that achieves the most resonance with the story – at some point, elements of the world you’ve seen in the world cut scenes in the game. It’s a fun trick, but it serves a plot that’s not precisely poignant. 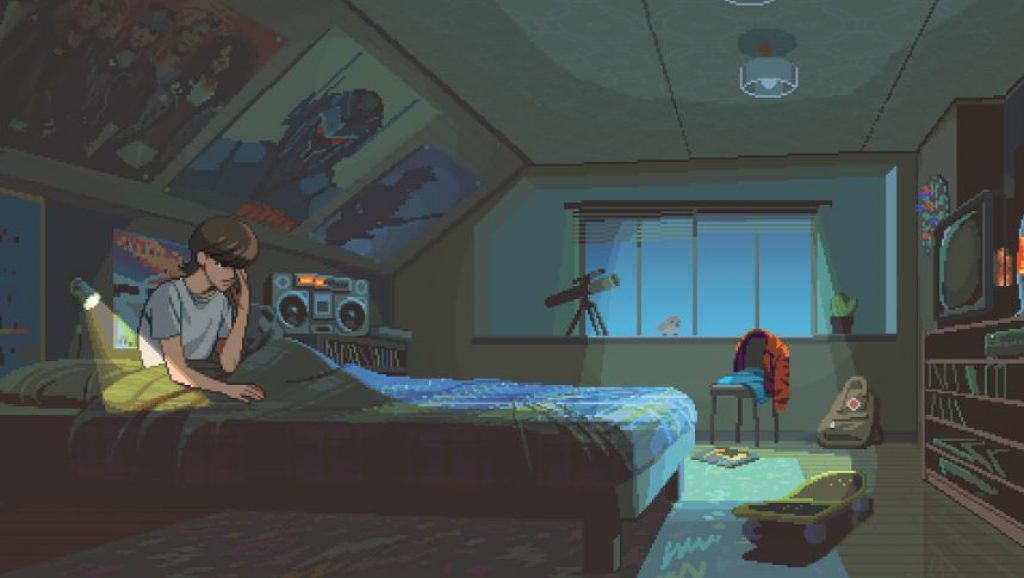 Shadowplay, a “ninja” game, is the pinnacle of 198X. It is the longest game in the collection. You play as a fast-running ninja across a series of auto-scrolling screens. You can move left and right, jump, slide and strike your sword against enemies in front of you. It has the feel of an involved car runner and timing your jumps and slashes to avoid enemy attacks and falls is captivating, with ever-changing level designs and exciting challenges reaching the right level of difficulty where the game is challenging without being frustrating.

The platforms, spikes, and pits you encounter will make you read your environment and think about how to time your moves as you run through each level, cutting against your enemies. You can collect power-ups to give your sword a more extended range, and there are more levels here than in the other games. There’s a great boss fight at the end where you have to dodge between multiple platforms while a demon shoots ranks at you, and reaching the end feels satisfying in a way that the other games don’t.

As much as 198X seems like a gimmick, Shadowplay stands out as an experience that could work as a full title. It feels disconnected from the overarching story, but it’s the most fun part of the 198X. The final game, Kill Screen, is a simple first-person RPG. It wants to be weird and creepy rather than particularly challenging, and it works pretty well at that level. It is intended to reflect the mental state of the protagonist, who has spent every video so far. 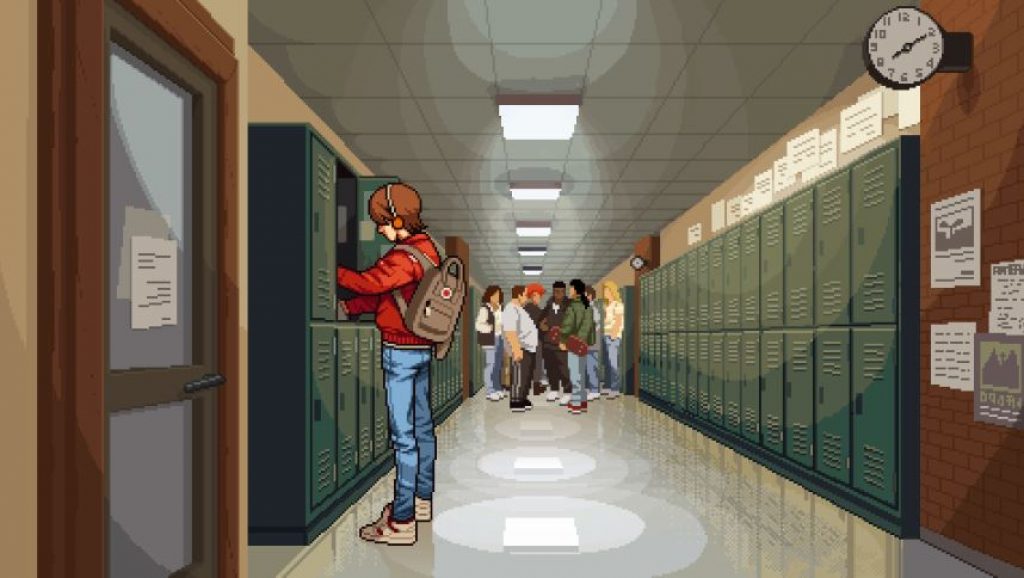 It works as a mood piece and contains cool, strange images, but the gameplay, where you look for dragons in a maze full of random encounters, is straightforward. There’s a neat Paper Mario-inspired mechanic, where you can press the time to attack to deal more damage, and the enemy’s weird designs are inventive, but it’s quite a note in both gameplay- model as the commentary on the Kid’s mood.

198X ends with a “To be continued.” This feels appropriate because the game, which isn’t explicitly announced as episodic on the Steam page, explores not only short but incomplete. As neat as the concept may be, 198X doesn’t do enough to sell you about the connection between the Kid’s metanarrative and the arcade games he plays – or spend enough time investing in why this matters. There are promises in some of these short genre riffs, but the game doesn’t give you many reasons to worry about the Kid and his desire to leave the suburbs.

198X review is an excellent idea with mediocre execution. While the games provide a bit of fun, there isn’t enough here to make the game feel like a true ode to the 1980s arcades, nor the Kid’s plight, and his desire to escape his current life, are fully connected. There’s something to see here – and Shadowplay, in particular, is a lot of fun – but 198X feels more like a proof of concept than an end product.

198X takes advantage of our love of the ’80s games and gives you a handful of short game vignettes wrapped in a simple story about the pain of growing up.