Compsmag is supported by its audience. When you buy through links on our website, we may earn an affiliate commission fee. Learn more
Reviews » Anno 1800 Review
Reviews

In the heart of every European city founded before the 19th century is a church. The same goes for Anno 1800. In the center of your city is a beautiful cathedral, the spectacular tower that reaches to the sky and illuminates the life of everyone who passes by. It is a lovely church, but it hides something. This is our Anno 1800 Review. 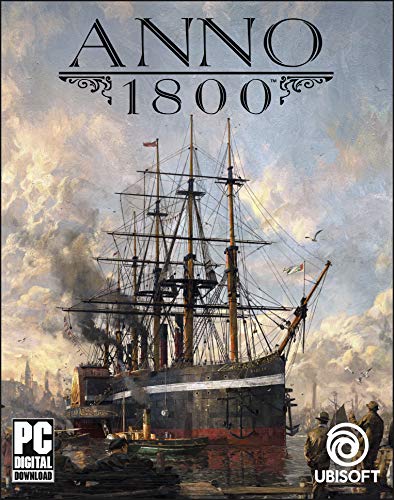 An intimidating and complex financial simulation lies at the heart of Anno 1800. It may feel like you’re overseeing the rise and occasional fall of a European-style city like this from the industrial era. But really, you’re juggling numbers; thumb squeezed into the ledger of accounts, refined production efficiency, and stabilization of trade fluctuations. Anno 1800 is perhaps the most beautiful scenery I’ve ever seen.

Each randomly generated map in the core mode unfolds as a mostly blank canvas; a glistening sea dotted with islands waiting to be claimed by you and your opponents. As you expand your reach across islands and into the New World – and your empire is undergoing its industrial revolution. You will use more advanced technologies, extracting coal and oil to fuel large farms and formidable steam engines. However, the basic principle remains constant: satisfy your population by using them to produce natural resources into commodities that attract more people to move to your cities. 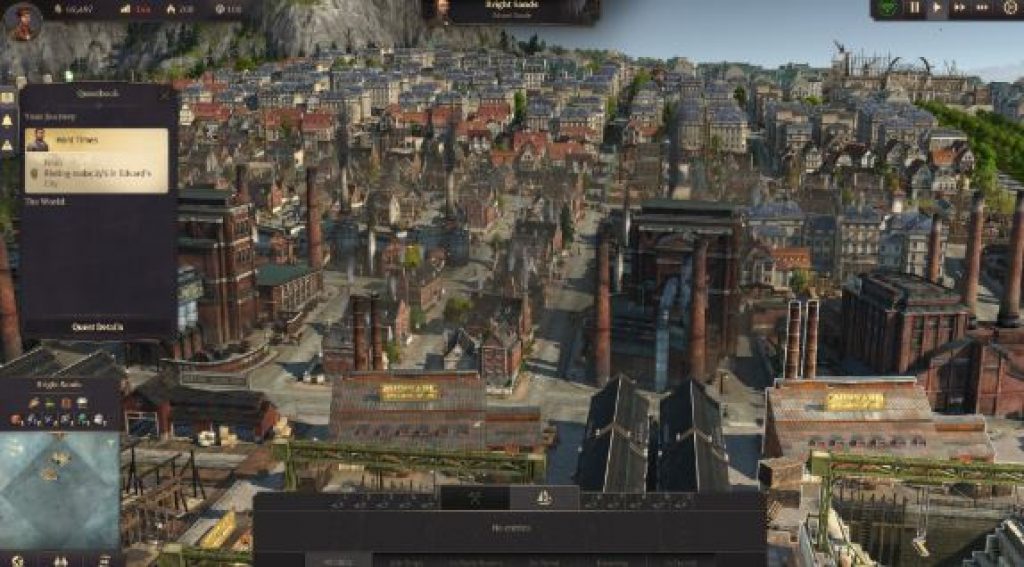 Everything becomes a production chain that you can configure, massage, and optimize. In the beginning, the choices you make here are relatively simple; the pristine terrain of your first settlement makes it simple to place the knitter near the farm so that the wool is delivered quickly and the warehouse is within reach so that the finished goods can be collected for immediate sale. But soon, the need for a navy means you had to build a sailmaker that is now diverting wool previously used by the knitter.

Building another sheep farm means finding the physical space for the other farm and all the other housing for the new farmers. Extend this scenario into a game for a few hours, and it will include dozens of production chains of increasing complexity and interconnectivity. Managing these production chains – be it work clothes and sails or beer and pocket watches – is an enjoyable exercise in a sort of ‘balancing the books’ phrase.

You know you have to spend resources to grow, but your success depends on finding that ever-moving sweet spot between reaching too far and not pushing far enough. It is necessary to keep the required resources flowing and meet the housing and job demands of your population, but it is not enough. To keep a firm grip on your economy, you need to appreciate the various financial levers available to you, which allow you to fine-tune tax rates and production ratios, which can mean the difference between going black and going out of business.

Of course, it’s also just as fun to play the more visual puzzle game of city planning, where you not only enter that new building where the specific dimensions fit, but where it also maintains proximity to the related structures in the chain. Nobel supporting business here is the “move” tool that allows you to pick up and move any building to another location without any cost. Should you have a police station appear in the center, but there is no space? Just walk the nearby houses down the street to open up space. 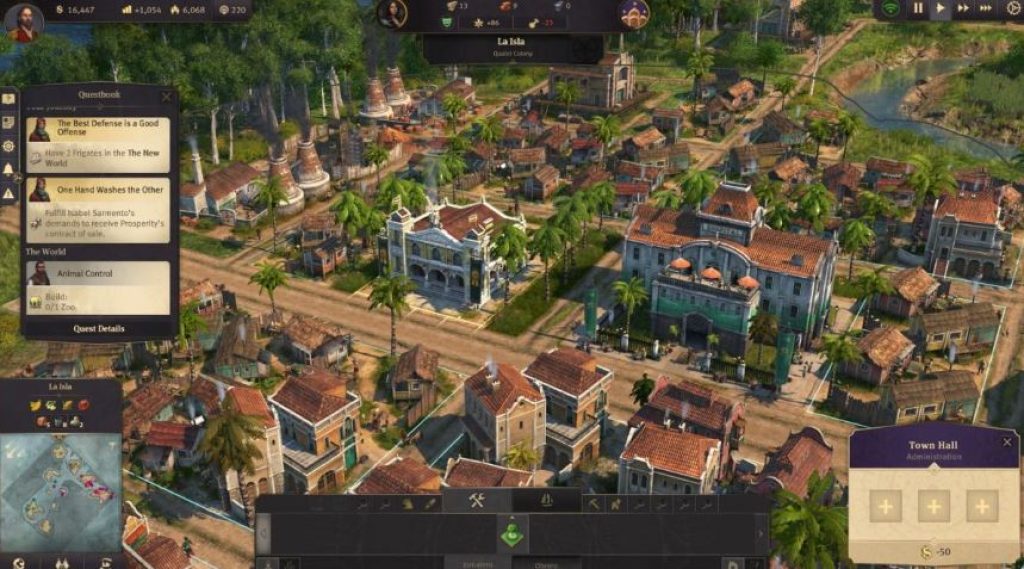 It looks beautiful when it all comes together, like a beautifully detailed diorama that you can poke, poke, and tweak to your heart’s content. There is even a first-person mode that allows you to walk the streets and observe all your townspeople performing their daily activities. I was especially pleased with the moments I was able to spend admiring the view before a new urgent topic justified an investigation, and I had to go back to cracking those numbers.

Turning all plates becomes even more difficult as you progress through the industrial era. Production chains that were once simple turn one-to-one input/output ratios into logistics nightmares as multiple buildings enter multiple other buildings. The demands of the work are only compounded by a lack of clarity in the feedback you get when things don’t work at full capacity. Simple things like knowing how many flour mills and grain farms support a bakery just aren’t communicated enough in the game or the missing manual. I spent hours trial and error in such situations before finding an extensive external wiki that I always tapped myself while playing.

There is a campaign mode that acts as a tutorial before transitioning into the main sandbox. And there is an additional setting that allows for a more guided experience so you can achieve specific goals at the right times. I found both very welcome even as someone who had played some of the previous Anno games. But at the same time, I felt that other important aspects were not explained, or not explained thoroughly enough, and it was frustrating to guess about solutions to problems that I was not sure I had even correctly diagnosed. 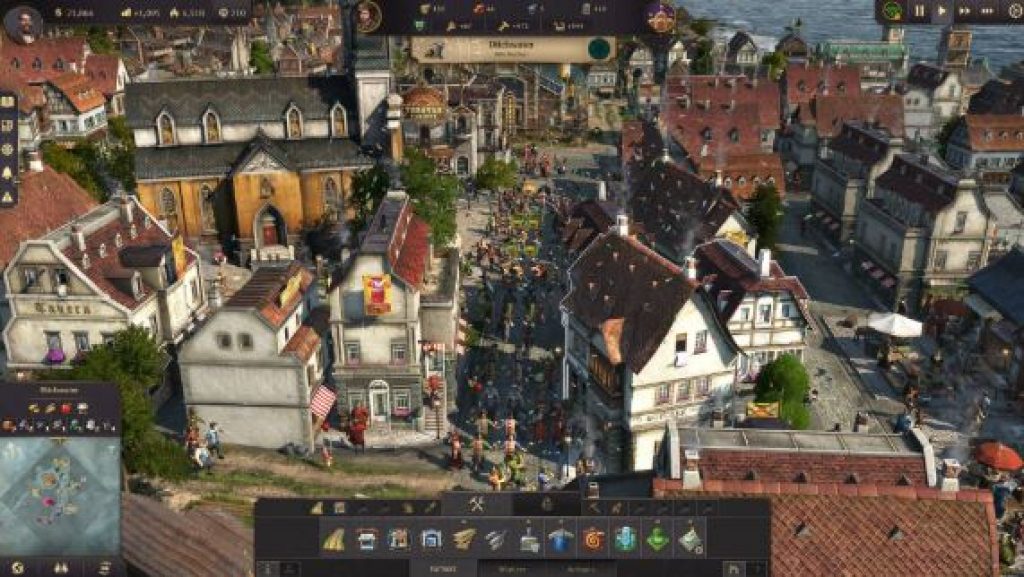 Much of Anno 1800 is spent watching songs going up and down. Total gold drops. Now it goes up again. There are not enough workers for the number of available jobs. Okay, now there are too many workers and not enough engineers. Sometimes it is clear why these things happen, and sometimes it is clear what you can do to rectify the situation. But other times, it is not, and it is quite panicking.

My stomach tightened every time the numbers plummeted in red, but as soon as they went back to black, I felt relief. Still, outside of these sharp fluctuations, when the numbers remained relatively stable, and my economy seemed to be ticking steadily, I couldn’t shake off this nagging feeling that everything was always on the verge of collapse.

I spent all my time playing Anno 1800 in a mild but ubiquitous state of fear. As a city-building simulator with an emphasis on economic management, it is just as robust and powerful as the steel mills that can pollute the air. But for all the island’s natural beauty and the architectural splendor of its churches, theaters, and piers, it’s just a little too cold in its reliance on numbers and a little too impenetrable in its reluctance to show you its workings. I’m glad I went there, but I don’t think I would want to live there.

An intimidating and complex financial simulation lies at the heart of Anno 1800. It may seem like you’re overseeing the rise and occasional fall of a European-style city like this from the industrial era. But really, you’re juggling numbers, thumb squeezed into the ledger of accounts, refined production efficiency, and stabilization of trade fluctuations.