If you haven’t noticed, the newest flagship laptop from Asus, the ROG Zephyrus M GM501, looks good – so good in fact that the appearance trickles down to Asus’ mainstream line. The Asus ROG GU501 ($ 1,500) is almost identical to that flagship machine but has a midrange Nvidia GeForce GTX 1060 GPU. You still get a customizable RGB keyboard and a strong sound quality, but the weak point is a weak display. Here is our Asus ROG GU501 Review. 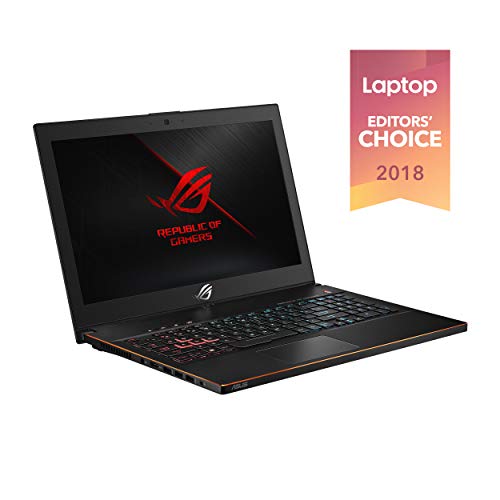 You may have seen this before. The ROG GU501 looks almost identical to the Asus ROG Zephyrus M GM501 that we have recently discussed. It is made of a handsome black aluminum with a two-tone effect and has a large, mirror-glossy ROG logo on the right side of the lid that lights up in a threatening red when the laptop is on. The lid also has a small Republic of Gamers logo at the very bottom of the light and a recess lets you see the status lights even when the machine is closed.

When you open the laptop, you will see a 15.6-inch, 1080p screen surrounded by a thick border. There is a full island-style keyboard with a number pad on the aluminum deck and some volume keys above the Function row. But if you compare the GU501 with the Zephyrus, you also notice what is missing: an exhaust system at the rear of the machine that is opened and closed with the laptop, allowing a lot of heat to escape. There are two rear legs on the GU501 that lift the machine to release a little extra heat, but nothing is as dramatic as the vent.

Despite its slim chassis, the GU501 has many ports. On the left, there are three USB 3.0 ports, an HDMI output, a combined headphone-microphone connection, and a power connection. The right side contains a fourth USB Type-A (3.0) port, a Thunderbolt 3 port, and a Kensington slot.

The keyboard of the GU501 offers 1.4 millimeters of freedom of movement, which is just not the 1.5 mm that we prefer. With 68 grams of power needed to push the keys down, the keyboard was somewhat stiff. I got used to it, but I also came out deeper than I wanted. Nevertheless, I hit 108 words per minute on the 10fastfingers.com type test, which is normal for me, with my usual error rate of 2 percent.

The 4.0 x 2.3-inch touchpad is a bit short, but it does the job (and you’ll probably use a gaming mouse anyway). With Windows Precision drivers, it can handle complex gestures such as tapping three fingers to call Cortana, as well as standard two-finger gestures such as scrolling and pinch-to-zoom.

The 15.6-inch, 1080p screen on the GU501 is not as clear as I would like, but it is lively. When I watched the trailer for Deadpool 2, there were a few scenes in the city where I wish I could increase the brightness, although the red costume of Deadpool often popped up against the gray cityscape. The yellow jumpsuits in the prison also scored in a factory.

When I played Middle-earth: Shadow of War, the game seemed darker than it should have, especially since the twilight became uniform. It made it difficult to see Talion’s leather cloak and the greenery around an outpost of an arch.

The Asus panel covers an excellent 115 percent of the sRGB color range, which is more vivid than the PowerSpec 1510 (113 percent), the Acer Predator Helios 300 (81 percent), and the Dell Inspiron 15 7000 Gaming (70 percent). But the regular gaming average of 119 percent was slightly higher.

The ROG GU501 is loud and proud. The sound from the speakers easily filled a medium-sized conference room with only 50 percent of its maximum volume. The audio is also detailed: when I listened to The Weeknd and “Pray for Me” by Kendrick Lamar, the vocals, the synthetics, and even the deep bass came through. With louder volumes, however, the vocals blew out a bit, so I tended to keep it on the quiet side.

In the pre-installed Sonic Studio III app, I discovered that switching to Film or Gaming modes worsened that effect, so the default option for music is probably The Best choice. However, the ROG GU501 sounded great during gaming. When I played Middle-earth: Shadow of War, I could touch the footsteps of Talion that cracked leaves, and the mocking remarks of orcs during the battles were loud and clear.

Asus armed the GU501 with an Nvidia GeForce GTX 1060 GPU with 6 GB VRAM, so it is VR ready and can play most games at high settings. In fact, I cranked Middle Earth: Shadow of War to ultra at 1080p, and it ran between 45 and 53 frames per second as I fled, trying to fend off a particularly angry herd of orcs.

The ROG GU501 earned a score of 7 (out of 11) on the SteamVR performance test, so it should work with your HTC Vive, Vive Pro, or Oculus Rift. The PowerSpec, with its more powerful GPU, ran in an 11, but the usual average is a lower 5.5. The Inspiron received a 5.9 and the Helios scored a 7.1.

With the latest Intel Core i7-8750H CPU, 16 GB RAM, a 128 GB SSD and a 1 TB SSHD (with an 8 GB SSD cache), everyday computer tasks are a joke for the GU501. Do 25 browser tabs have to be open? I did that in Google Chrome, including one that streamed a 1080p episode of Last Week Tonight and there was no delay whatsoever.

Asus’ laptop, like most gaming notebooks, doesn’t last that long on a load. It has only run 4 hours and 43 minutes on our battery test, which runs continuously via web pages, videos, and graphics benchmarks via Wi-Fi. That is longer than the average regular gaming notebook (3:01), but the Helios (6:01) and the Inspiron (7:17) have lasted longer.

The Asus ROG GU501 does a lot of good: it looks great, it plays games well and the audio quality is solid. His only real sin is that the display is not clear enough. If you can find it at a Micro Center in your area, the PowerSpec 1510 is a better deal. At $ 1400 ($ 100 less), you get an Nvidia GeForce GTX 1070 GPU, although that machine comes with a 7th Gen CPU of the latest generation. If you are looking for a bargain, the $ 1,140 Acer Predator Helios 300 is another option. It offers a GTX 1060 GPU and a longer battery life, although the screen is also weak.

Ultimately, that places the ROG GU501 as a premium player in the regular playing area. If you want the performance of a regular gaming laptop with a GTX 1060 but the premium, expensive looks of a Zephyrus flagship, it’s worth paying a little extra for this sleek machine.

That’s it for our Asus ROG GU501 Review. Let us know your thoughts on this laptop by dropping your comments below. Also, check our list of Best Gaming Laptops that you can buy right now.

The Asus ROG GU501 delivers gaming performance in a slim package with solid audio, but the screen is too weak.