Compsmag is supported by its audience. When you buy through links on our website, we may earn an affiliate commission fee. Learn more
Reviews » Code Vein Review
Reviews

Code Vein makes its own identity from the start. It may stick to a Dark Souls formula that has come to define a generation of action RPGs. Still, the latest from Bandai Namco knows how to stand out from the crowd by presenting a post-apocalyptic world filled with what are necessarily anime vampires. Exciting concepts and mechanics filter out of this central blood-soaked idea, resulting in a game that feels familiar yet is vastly different from inspiration. Still, it’s the parts that are most recognizable, like the fight, where Code Vein stumbles. This is our Code Vein Review. 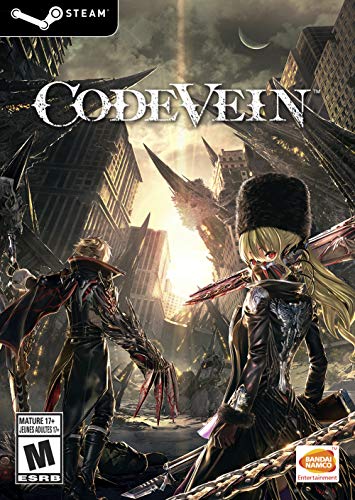 After apocalyptic catastrophe ravages the world, the dead are resurrected as immortal creatures called Revenants. The only price they have to pay for reincarnation is an insatiable hunger for blood. There is no neck biting, disintegration in sunlight, or anything else you would usually associate with traditional vampires here. However, if a Revenant goes too long without satisfying his hunger for blood, they lose their humanity and transform into creatures known as the Lost.

Fortunately, Revenants won’t feed on the last surviving humans to survive. Blood Beads grow on plants around the world and act as suitable substitutes for human blood, nourishing a Revenant’s bloodlust in much the same way. The problem is that Blood Beads are getting more and more scarce, so you have to find the source and hopefully get a steady supply. Either way, that’s the basic plot, but it doesn’t take long to deviate from other areas and introduce world-ending bets.

In a stereotypically protagonistic way, you start the game by waking up with amnesia before you find out that you are the chosen one. You see, every Revenant in Code Vein has a class known as a Blood Code. Your created character is unique because they are not limited to a single blood code like everyone else. This malleability allows you to switch between different classes whenever you want while expanding your arsenal of available blood codes as you progress through the game.

Blood Codes are tailored to a specific playstyle that often fits into a standard RPG class template – think warrior or magician. Gifts are Code Vein’s version of skills, giving you access to a wide variety of passive and active skills that are tied to, but not limited to, any Blood Code. You can mix and match Gifts to some degree, with the most exciting ones that let you unleash flashy special attacks in melee combat. However, that’s not all they are capable of, as others allow you to fire projectiles from pervasive Ichor, increase your attack power, temporarily add an anesthetic effect to your weapon, and much more.

Regardless, picking up gifts amid regular attacks makes for some satisfying combos, and there’s a pleasing weight behind every hit and crunch of Code Vein’s battle. Defeating enemies is based on rationing light and massive attacks, and you also have access to a decent arsenal of weapons, cycling through the usual range of broadswords, halberds, giant hammers, and spears. Most of them are also ridiculously large in a typical anime fashion. There isn’t much variation between each moveset within the specific class of a weapon, but bouncing between weapon types provides a definite departure.

Each Gift consumes from a pool of Ichor replenished by simply defeating enemies or replaced in more substantial doses by performing drain attacks, parries and backstabs. This encourages you to use gifts regularly, approaching each enemy with an attacking mindset to unleash a slew of special attacks and then quickly recover a lost Ichor. You have to choose the right time to use a draining attack because of the great excitement, but backstitches are relatively easy to pull off, while parries require precise timing.

Complaining about enemies is satisfying, and gifts brighten any battle with their inherent flexibility, but fighting is a disappointing affair with the AI’s shortcomings. There is a sufficient variety of enemy types, but this variation generally only applies to their visual design as opposed to their behavior and movements. They are surprisingly static and spend most of their time idle instead of responding to your attacks. Any weapon you use is usually able to spread enemies on the first or second hit, allowing you to steer any enemy almost without resistance, and this will remain true throughout the game.

Code Vein doesn’t have to stick to the challenging difficulty of Dark Souls, but it also misses the mark by never forcing you to learn or deepen your understanding of the game to progress. Combat turns into a mindless task where the only thing to watch out for is enemy placement and amount. The difficulty is figured out by throwing numerous enemies at you at once, which puts the focus on cooperative play. You can travel through the world of Code Vein with another player or by using one of the many AI companions.

The latter can hold their own in combat, which is especially useful when overwhelmed by multiple enemies – although their presence against individual opponents doesn’t do much to quell the simple routine of beating them. Exploring any environment is fascinating. The level design tends to wrap in and around itself, providing secret paths and capturing the happiness derived from opening a shortcut or discovering a new checkpoint to rest and the Haze you just got acquired to spend.

A sprawling area even borrows Anor Londo’s Il Duomo-inspired aesthetic, reimagining the pearly-white castle as a complicated maze. It is only a pity that the visual design is regularly pedestrian. You spend the majority of your time traversing boring post-apocalyptic streets and damp caves where rubble is Code Vein’s most distinctive feature. The addition of fire and sand shakes up the quintessentially run-down townscape, but it’s not nearly enough to shake the feeling you’ve seen it all before.

There’s even a late area that takes over the Anor Londo aesthetic for the second time, with the only difference being that it’s now on the inside and slightly darker. Recalling memories of the most crucial location of Dark Souls is not doing well.

Code Vein review takes on the Souls-esque formula in its structure and presents a familiar cycle of progression and necessary combat deals. There are also some exciting ideas built around using different Blood Codes and their different abilities. You can see the fragments of a fantastic game hidden in these systems and the meaty combat feedback. Still, the mundane nature of its enemies and the effect they have on wiping out the fun of battle prevents Code Vein from ever realizing its potential.

Exciting concepts and mechanics filter out of this central blood-soaked idea, resulting in a game that feels familiar yet is vastly different from inspiration.