Compsmag is supported by its audience. When you buy through links on our website, we may earn an affiliate commission fee. Learn more
Reviews » Corsair Dark Core RGB Pro Review
Reviews

When it comes to the best gaming mouse, it’s not just about performance; it’s about functionality. Blame Twitch or, perhaps, the ever-growing coverage of eSports, but many have accepted that they might never be able to do what the professionals do, so they might as well get a pointer with some neat tricks. The Corsair’s Dark Core RGB Pro ($120) appeals to that crowd. Like its predecessors, the Dark Core RGB (around $70) and Dark Core RGB SE (around $90), which adds wireless Qi charging to the package, this is a wireless or wired design. This is our Corsair Dark Core RGB Pro Review.

The Dark Core RGB Pro uses a custom design with an aesthetic that will draw strong opinions. But with its convenient layout of the 8 programmable buttons, the design is suitable for FPS gamers who want to drop a cable from their setup, while still having the ability to go wired in very competitive situations. Unlike the standard Dark Core RGB models, the Dark Core RGB Pro gives the busy thumb pad a cleaner look. This translates into fewer areas where dirt can accumulate. 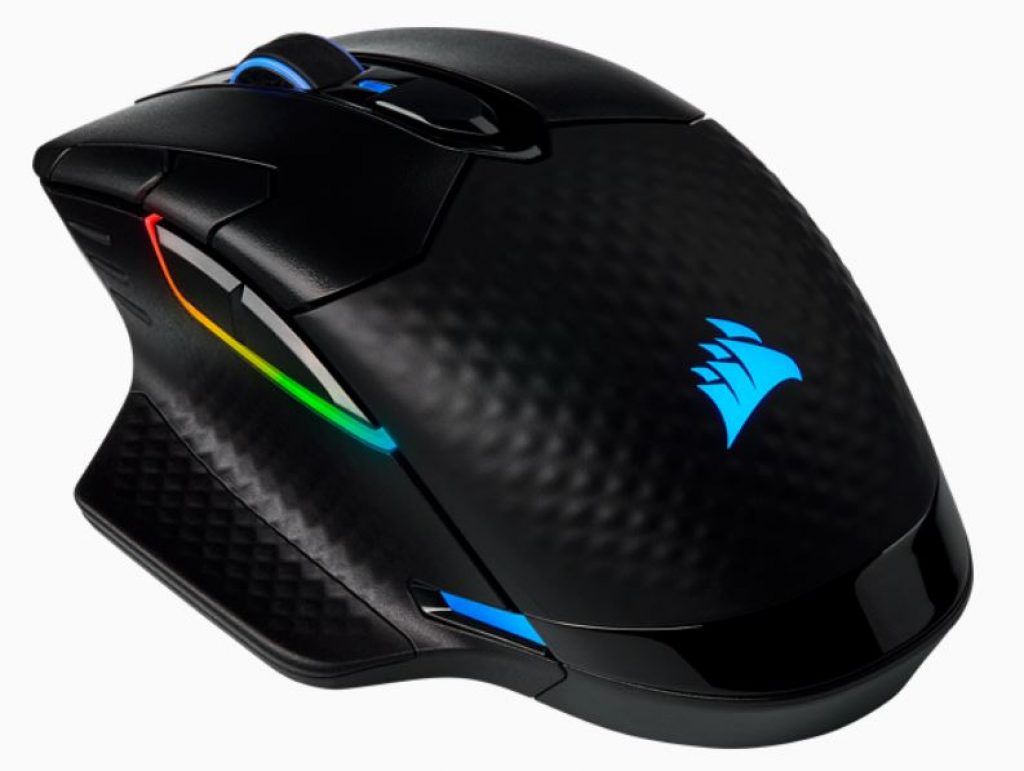 A single high gloss to the back and a small strip between the left and right mouse buttons are the only reflective surfaces, with the buttons themselves a muted matte black. The rear and left side panels have a textured rubber finish. Those rubber surfaces felt comfortable during my tests, and the mouse didn’t slip around in my hand when it became clammy.

Of course, it’s against the law to release a gaming peripheral without any kind of RGB lighting. The Dark Core RGB Pro’s RGB is delivered through 9 individually programmable zones. The overall picture is less pretentious than that of the Glorious Model O, a honeycomb-like FPS mouse, and its rainbow tires. Still, restrained RGB is not a bad thing, and it’s effortless to configure custom lighting patterns in Corsair’s iCue software.

With a length of 43.2 mm (1.7 inches), the Dark Core RGB Pro is slightly higher than other mice. For example, the Model O Minus is 1.42 inches (36.07 mm) tall. However, it still feels slim. Compared to, for example, the Corsair Nightsword RGB (5.1 x 3.4 x 1.7 inches), the Dark Core RGB Pro is slightly more comfortable to use with a palm grip, but somewhat less comfortable in claw grip because you hold your claw in a higher position. Even as a hybrid/claw grip player with smaller hands, I still found this shape entirely usable.

The right side of the Dark Core RGB Pro has a modular, magnetized grip option. So if you prefer feet, as it were, on both sides of the mouse, you can simply flip the flat modular panel over and swap it with the textured panel that comes in the package. The button layout of the Dark Core RGB Pro also makes absolute sense here, which is not definite for the standard version.

The two DPI adjustment buttons, which allow you to adjust DPI in just a few steps, are on the other side of the left mouse button, so you probably won’t accidentally hit them. But those buttons are also easy to feel when you need them. What’s more, the DPI customization buttons come with a handy trio of lighting indicators, so you’ll know at a glance which DPI you’re using.

The forward/backward web navigation buttons are larger and more responsive than the Nightsword RGB. Meanwhile, pressing the mouse wheel ensures a satisfying click, and the profile switch button underneath does it as advertised. It’s a bit surprising not to find a low DPI ‘sniper mode’ anywhere on this layout, given that the mouse is so clearly aimed at FPS players.

Besides, iCue offers a pointer speed enhancer, which has less in-game value but makes life easier if you spend a lot of time in video/audio editing programs. You get three DPI profiles, each with three sensitivity settings, so if you want to be truly organized, you can set the parameters for your three most frequently played games and just switch between them with the button under the mouse wheel.

However, there is currently no control over the polling rate in iCUE, which is a bit puzzling. Older versions (when it was CUE) had this functionality, so it’s not clear why it’s gone or when – if ever – it might come back. The priority should now be to increase the reliability of that 2.4 GHz wireless connection. Whether Corsair can achieve that via firmware/iCUE remains to be seen.

While the Dark Core RGB Pro offers the option of a wired connection, its most significant feature is its ability to switch to a wireless connection via Corsair’s Slipstream wireless dongle technology. Luckily, Slipstream is good enough to spend most of my time with the Dark Core RGB Pro, forgetting that it works wirelessly. Slipstream uses a custom 2.4 GHz wireless protocol that is supposed to send twice the wireless packets, and Corsair claims the latency is as low as under 1ms. 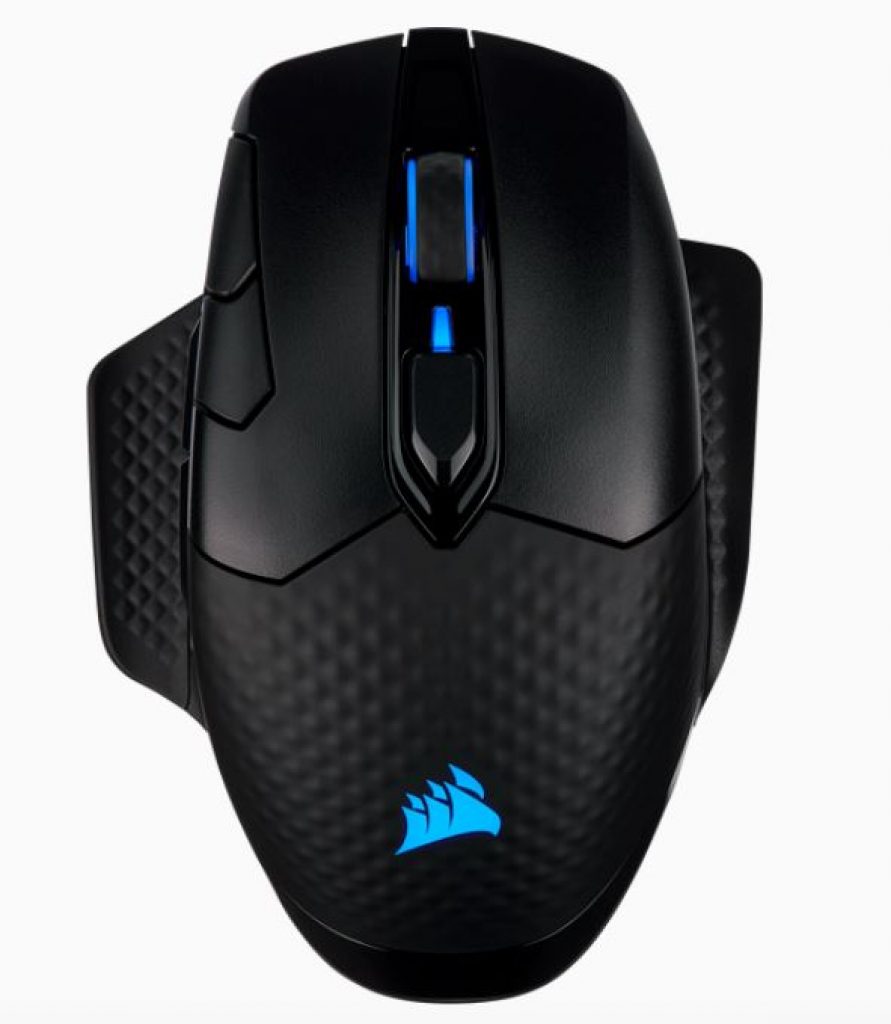 That held up in practice. When it came to lowering DPIs in particular — the lowest I went was 400 DPI — the mouse was indistinguishable from a well-wired model. At 800 DPI, the performance felt silky smooth, and although it took a few games in CS: GO to adapt to the shape of the Dark Core RGB Pro, there was no drop-off in my performance. But then everything worked.

Unfortunately, it didn’t always work. When using a desktop with a different dongle for a headset, plus a Wi-Fi receiver, our test sample was prone to prolonged bumps and frostbite that occurred about every hour when using the wireless dongle. If I was surfing the web or in the middle of a video editing task, it was an annoyance that recovered after a few seconds, and I didn’t have to take the USB dongle out and plug it back in again.

However, if I was in the middle of a game, it was a bigger problem. In general, my fear of wireless failure while using any device — headsets, keyboards, mice, or controllers — is based on the bad old days 15 years ago when wireless technology simply wasn’t there. These days, it’s rare to experience noticeable stuttering like this, and this undermines the Dark Core RGB’s entire effort as a competing FPS mouse.

The layout of the buttons and the shape of the Dark Core RGB Pro worked well during gaming. Having easy to locate DPI bikes is a bonus in snip-heavy battle royal like PUBG, where the pace of play is generally slow enough that you can get set, look down your sights, then cycle to a lower DPI. It beats having to reach for an awkward sniper mode button. The broad PTFE areas at the bottom worked exceptionally well for flick-aiming in twitchier shooters like Quake Champions.

The 4.2-ounce weight of the Dark Core RGB Pro is not adjustable but turned out to be in the sweet spot for motion-intensive titles. Moving between these and the Glorious Model O Minus (2.08 ounces) was a significant adjustment in terms of weight and shape, but the answer to which the mouse is best will ultimately come down to personal preference.

As always, with Corsair equipment, the iCUE software offers further customization, including macros, adjustable RGB illumination, button remapping, DPI adjustments, and a few extras. Particularly useful is Corsair’s surface calibration tool, which requires the USB-C cable to work and has a truly tangible effect on smoothness once you run a simple test drawing spiral at a given speed. Angle movement is also available via a checkbox. Don’t knock it until you’ve tried it. 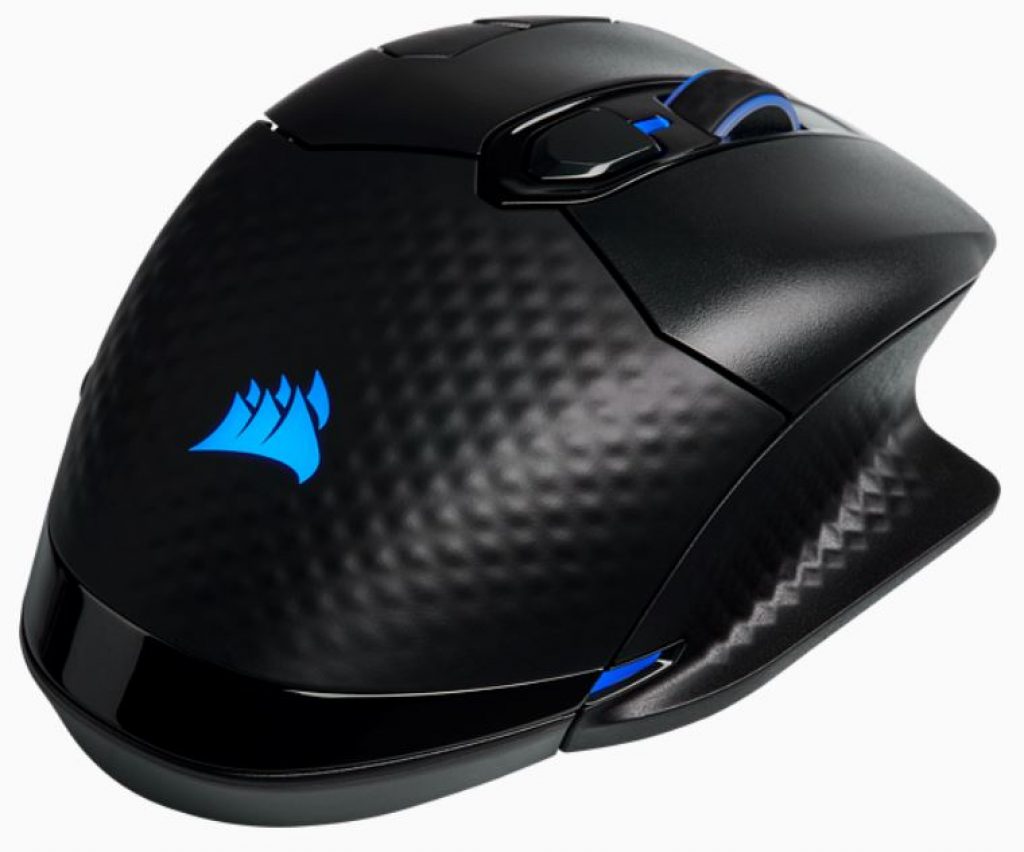 It’s a much more subtle effect than some seem to think, effectively anticipating when you try to ‘draw’ a straight line with your mouse and help you do it. For many, it’s a step away from the ultimate raw input control and, therefore, useless, but some might get a few more headshots from it.

The Corsair Dark Core Pro RGB is very promising for gamers. The new Dark Core RGB Pro is available for $120 but is still cheaper than rivals such as Logitech’s G PRO ($150 at the time of writing) and Logitech G502’s Lightspeed ($150). Corsair’s latest version gets a boost from a smart 8-button layout that works well with FPS games. And the improved sensor kept up with me on the battlefield.

But with several other wireless dongles connected to our system, we had stutter problems with the 2.4 GHz wireless connection, which made this mouse tough on gaming. Things get worse when you don’t have Bluetooth 4.0 capability. The wired option is also reliable, but part of what you pay for here is flexibility.

But if you’re okay with a Bluetooth or wired connection, or if you don’t have many wireless dongles you already depend on, the Dark Core RGB Pro offers a reliable sensor and easily accessible programmable buttons.

The Corsair Dark Core RGB Pro is a real leader in the wireless FPS mouse race, but its shape will challenge some gamers.