Compsmag is supported by its audience. When you buy through links on our website, we may earn an affiliate commission fee. Learn more
Reviews » Fire Emblem: Three Houses Review

Fire Emblem: Three houses demand a lot from you. Each piece, from struggles to friendships to training your units, should be managed both individually and as a combination. It can be intimidating, however, when it all clicks together, it clicks. Learning the art of thoughtful lesson planning as a professor improves your performance on the battlefield, where success depends on calculated teamwork and agile execution. This is our Fire Emblem: Three Houses Review. 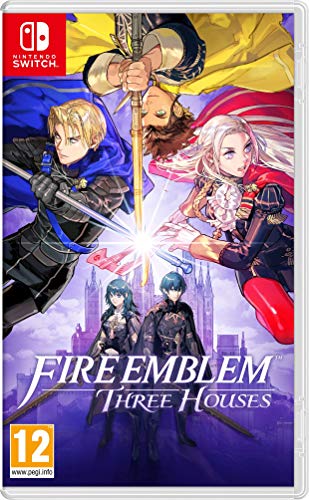 Cultivating relationships during a battle, in turn, brings you closer to each of the characters, in which you’ll want to invest even more time in the classroom. Each piece is placed in a rewarding, engaging loop in the next, where you get lost in the whole experience, not just the details.

Three Houses throws you like a mercenary who, while on a mission with his father, runs into a group of teenagers. After a brief introduction and battle tutorial – which you shouldn’t need, as you’re already an established mercenary, but we’ll go with you – you’ll learn they’re students at Garreg Mach Monastery. Each of them leads one of the three houses of the school: Black Eagles, Blue Lions, or Golden Deer. By order of the archbishop of the church, who indeed gives off bad vibrations but is also a gentle mother figure, you eventually become a professor and have to choose which of the houses you will lead.

There’s a lot of mystery in the setup, with consistent hints that something is not quite right, and it’s easy to delve into trying to find out what the archbishop and various other shady figures are up to. Your leading role as a professor is to instruct your students in combat matters and prepare them for storytelling battles at the end of each month. Campaigns in Three Houses have the same turn-based, tactical battles at the heart of the series, albeit with some changes.

The classic weapons triangle is somewhat downplayed in favor of Combat Arts, which have been slightly modified compared to their introduction in Fire Emblem Echoes: Shadows of Valentia. Combat Arts are attacks linked to a weapon type and can increase the attack power of a unit at the expense of the durability of the weapon; some are effective against specific enemy types, such as armored units. You can also unlock skills outside Combat Arts that give you better stats with certain weapons, such as leveraging the use of an ax against a lance user, similar to the old weapons triangle.

It’s the same complexity for which the series is known, but less abstracted, making it a little easier to plot a strategy without sacrificing depth. One of the significant combat expansions is battalions, mini-alloys that you can equip and that offer different advantages to a unit during combat. They also give you a new type of attack called a Gambit, which varies according to the kind of battalion-focused, brute force, and so on and paralyzes the enemies it hits.

Gambits are of limited use and can be incredibly powerful against the right enemies. You can further increase the effectiveness of a Gambit if one or more of your other units are within the attack range of the target, a proven Fire Emblem concept that applies to all kinds of attacks. There’s also an animated screen that makes every character involved with the Gambit look fierce during the attack.

How much you use Combat Arts and Gambits depends on the difficulty level. At a reasonable difficulty level, well-trained units can probably attack most enemies once or twice without the help of Combat Arts or Gambits. On Hard, however, the enemies hit harder and are more resistant to your attacks. You need to think more carefully about the placement of units, the best time to use a Gambit and take advantage of the stun effect, and how much Combat Arts you can fire before your weapon breaks. This is where it gets exciting; after a few careful set-ups, you’ll be able to take out tons of enemies as your plans fall into place.

The predictable structure of each month and the fact that you can see the full monthly schedule with events that are noted in advance gives you the foundation to make adequate plans. All that time management can be overwhelming at first. You have to keep an eye on the skills and study goals of your students, your skills, everyone’s inventory, and various other gauges and menus as you plan the classes and battles that are coming up. But you are treated to an almost constant stream of positive reinforcement as those meters fill week after week and your students improve their skills. You’re always heading toward the next level, the following power you need to develop, the next month, and what can unfold.

Like all recent Fire Emblem games, keeping you invested in your units and their relationships is the glue that binds the whole experience. It’s incredibly useful in Three Houses, where your direct involvement in almost all aspects of a unit’s growth path gives you a particular interest in their success. After spending time and effort helping a character reach their full potential, you’re not only satisfied when they win a battle – you’re also proud. And the more you invest in someone – both emotionally and through months of lesson plans and instructions – the more careful you’ll be to stand in their way, and the more you’ll work on a solid battle strategy.

The first half concerns the church, its secrets, and the fact that the professor knows little about his own identity. Just as the primary loop of each month pulls you forward, so makes the promise of learning the truth about something, whether it’s why the archbishop wanted you to be a teacher in the first place or who is a suspiciously masked individual. However, these threads remain quite open, at least after one and a quarter. You get different details in each route, and so far, it has been a long process to get it all figured out.

After skipping five years, you enter the “war phase” of the game. While the structure of the game is the same – you even instruct your units, because you still need to train for battle – the focus shifts to the house-specific stories. These are many difficult decisions, where old friends become enemies, people you don’t have to kill, and students who have changed despite or because of your guidance. Late battles, in particular, are challenging, with higher stakes and multi-strip layouts that require a lot of forethought. Success in these battles is incredibly rewarding, as you’ll see dozens of hours of investment in your students reaching a crescendo, but they’re bittersweet in context.

When all was said and done, all I can think about was starting fresh gameplay. Of course, I was curious about the mysteries, but I also hoped to undo the mistakes I made. There were characters I didn’t interact enough, students I didn’t recruit, and much more effective ways to train my units. At first, there’s a second game that touches familiar territory, but after so much learning and growing in the first one, it also feels fresh. That speaks to the mechanical complexity and depth of Three Houses and the connections it has with its characters – and whether you manage inventories or battlefields, it’s a game that’s hard to put down even when it’s over.

Fire Emblem: Three houses demand a lot from you. Each piece, from struggles to friendships to training your units, should be managed both individually and as a combination. It can be intimidating, however, when it all clicks together, it clicks. Learning the art of thoughtful lesson planning as a professor improves your performance on the battlefield, where success depends on calculated teamwork and agile execution.