Compsmag is supported by its audience. When you buy through links on our website, we may earn an affiliate commission fee. Learn more
Reviews » Gears Tactics Review
Reviews

Gears of War has always needed tactical planning as a series. Understanding how to read a battlefield to find ideal coverage and a path to surround your opponent is as essential as your trusty Lancer assault rifle. Still, it’s surprising how well the series translates to a turn-based strategy RPG. Gears Tactics captures the chaotic, bloody roller coaster energy generated by the shooters, even as your focus changes from playing gear to servicing the machine. This is our Gears Tactics Review. 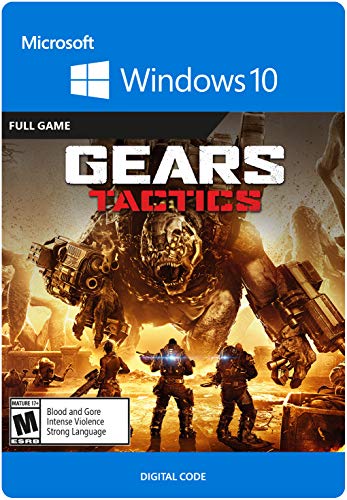 So while the plot takes place in the backseat, Gears Tactics twists the formula of the modern strategy RPG, making scenarios that fit the Gears mold. All XCOM-inspired mechanics are in place: action points that can be used to move or attack, half and full coverage, defensive overwatch positioning. If you’ve ever thought of the word ‘tactic game,’ the flow feels comfortable. It also feels incredibly familiar to Gears fans.

Nearly every mechanic and core series system appears in a turn-based form, and most fit remarkably well. Bringing down enemies becomes vital as it grants your team members additional actions. Overtaking with the Lancer chainsaw is an aggressive method to clear a path through an enemy; however, only if you can reach them without taking overwatch fire. Not only do the Gears series mechanics and stylistic feats make sense in a turn-based environment, but you can build strategies around it.

Likewise, every enemy type is imported from the shooter series, with stats and traits that convert their real-time action identities into a more stats-based turn-based form. There are still bugs left in your face, causing dangerous distractions. Some of the more advanced enemies, such as Boomers, drop their powerful explosive weapons, giving you the chance to return the enemy’s massive firepower. In a few cases, however, the Gears-like systems clash with the tried and tested XCOM-like ideas, making them feel unnecessary.

When the two identities merge, you get different scenarios that mimic the flow and intensity of the combat arenas in Gears shooters, even if they play in a more controlled, formulaic way. On paper, your standard team of four Gears is always outnumbered and outdone. Each wave of enemies has a certain momentum, which raises a moment of doubt as to whether or not you get a chance to survive. Searching through ruined cities and abandoned factories of various shapes and sizes, you go from cover to cover and try to get your team in the best possible position to tackle everything that’s around the corner.

While the situation is never right in your favor, there is almost always a solution to the threat you are facing. Whether you choose to dig in a defensive position or help you get through the Locust horde, you must react reactively to your strategic insight and combine your squad’s movements and attacks in the most efficient, sustainable way. Each character can “trade” three times per turn – move, shoot, or use a class-specific ability. Besides, specific benefits and equipment often give you plenty of opportunities to earn extra health or exercise.

The great thing about Gears Tactics is that those maneuvers depend entirely on how you develop your characters. Every gear falls into one of five classes that correspond to a specific weapon: supportive hunters get the Lancer, the aggressive Vanguard gets the Retro Lancer, Scouts get a Gnasher shotgun, and so on. As everyone gains experience and takes it to the next level, you can expand them with skills and passive benefits from a sizeable four-sided skill tree.

Each corner of the tree, which is square and not very tree-like, gives you different abilities and gives bonuses to a character’s unique skills that encourage you to use them in specific ways. Support is the healer, and you can improve those skills, but you can also build ways to give the other three characters extra moves every turn. Customizing each character, both by taking them to the next level and providing them with weapon mods and armor, makes them not only more powerful but also more specifically useful.

And even within those subclasses, there are interesting thematic variations. I mentioned Gabe Diaz, a support unit, as a healer, but I also made sure to grab all the skills that bolstered his chainsaw attack. At the end of the game, using the chainsaw gave each character an extra move, accelerated the cooldowns of all his abilities, and healed the entire party. At the same time, that specificity reinforces how repetitive the game starts to feel.

While the campaign took over 35 hours to finish, there are only a handful of mission types, along with a King of the Hill-style point check, a turn-limited character rescue, and numerous apologies for killing every Locust insight. While many are engaging, challenging, and exciting the first few times, they start to get thin when you repeat them over and over. Over time, the game will add modifiers and optional targets to spice things up, and those variations plus minor tweaks to hostile groupings are enough to make any mission feel fresh right now.

The only truly new missions are a trio of boss battles where you take on some of the series’ most significant and meanest enemies. These fights are demanding, long-winded endurance runs. In addition to the boss monsters, who have considerable swipe attacks that force you out of the deck, you’ll have to fight waves of standard enemies, which aren’t exactly easy to handle.

At a glance, you could argue that these battles are the epitome of the Gears Tactics format: each turn requires you to respond to new, potentially game-ending conditions, while also moving towards your goal and planning what your opponents will do next to do. They are too much of a “good” thing. The significant attacks feel more limited than awe-inspiring, and the elongated spectacle minimizes the momentum that pushes you through the standard missions.

While Gears Tactics wears itself a little lean at the end of its lengthy campaign, the rush to take a victory out of the clutches of defeat brings with it exciting, chaotic energy. Unlike many other strategy games, playing well doesn’t make you feel like a mastermind like you’ve cheated death. Every successful plan, even a last attempt, feels like a small ingenious intervention. That’s it for our Gears Tactics Review.

Gears Tactics captures the chaotic, bloody roller coaster energy generated by the shooters, even as your focus changes from playing gear to servicing the machine.