Compsmag is supported by its audience. When you buy through links on our website, we may earn an affiliate commission fee. Learn more
Reviews » Imperator: Rome Review
Reviews

The latest major strategy game from the current leading light of the genre, Paradox Interactive, puts you at the helm of one of the excellent powers of the late 4th century BC and asks you to conquer the world from Western Europe to South -Asia. At the same time, it can also put you in charge of one of the meekest tribes of the region and ask you to accomplish little more than survive. This is our Imperator: Rome Review.

In essence, Imperator: Rome is a game about building armies and marching to foreign lands. You recruit troops, gather the strategic resources needed to recruit upgraded troops, assign generals, point them to the target, and release them. There are technologies to investigate, civil matters to pursue, and religious concerns, but these are secondary factors, each just a different gear in the military machine.

Combat is intuitive and straightforward. Armies are forced to flee when morale breaks, while strict supply costs in each area work well to prevent units from being amassed in ridiculous “dead stacks.” Meanwhile, the need to besiege an enemy fortress for several months in the game helps curb any idea of ​​steamrolling. You can shout tactical instruction occasionally, but when it comes down to it, the winner in battle is the one with the more significant numbers. And if your opponent has the terrain advantage, you need an even greater numerical advantage to overcome it. 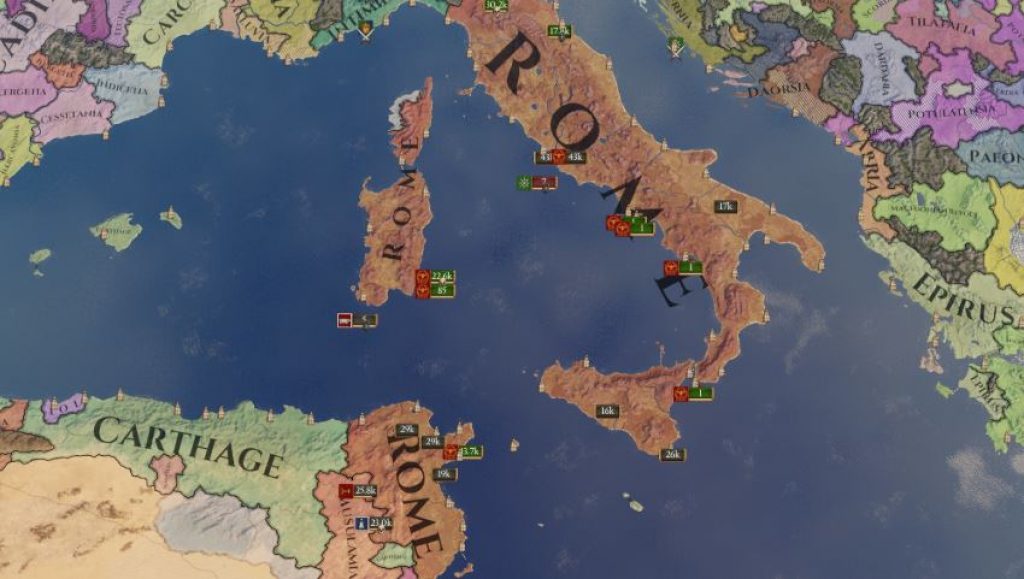 While I prefer a strategic game that offers varied paths to victory, there is a pure pleasure in Imperator: Rome’s rigid insistence that you just have to paint the map in the same color. You don’t have to play like Rome, of course, but it does make things easier. Your choice of country is a de facto difficulty regulator, with Rome (nestled between docile vassals and quickly overrun neutral states) offering a gentle introduction and Phrygia toss you in the deep end.

There are hundreds of countries to choose from all over the world, from Britain to North Africa to Scandinavia to Sri Lanka, and you can play as any of them. But more than a difficulty, your choice of the country sets expectations. Rome is known, but not as well known as Macedonia or Egypt, so the effects of its actions will be felt further and wider, ripple in diplomatic waves across the Mediterranean and draw condemnation or perhaps congratulations from its rivals.

As a great force, you have the weight to throw around, but other troops notice and react and add their importance to the scale. The result is a world that feels dynamic and connected, at least as far as you can appreciate the areas on the political map that switch back and forth between the color of your own country and that of your enemies. However, if you play as a smaller nation, you do not weight at all.

You have tiny territory, you have a small army, and your choices are minimal. The world probably doesn’t even realize you exist. If they do, it’s probably because they just noticed you have something they want, or worse, you’re just a small speed bump on the way to what they want. Played this way, Imperator: Rome feels strangely shy, an unsatisfying waiting game that is temporarily brought to life through tentative forays into expansion, while hoping no one notices. 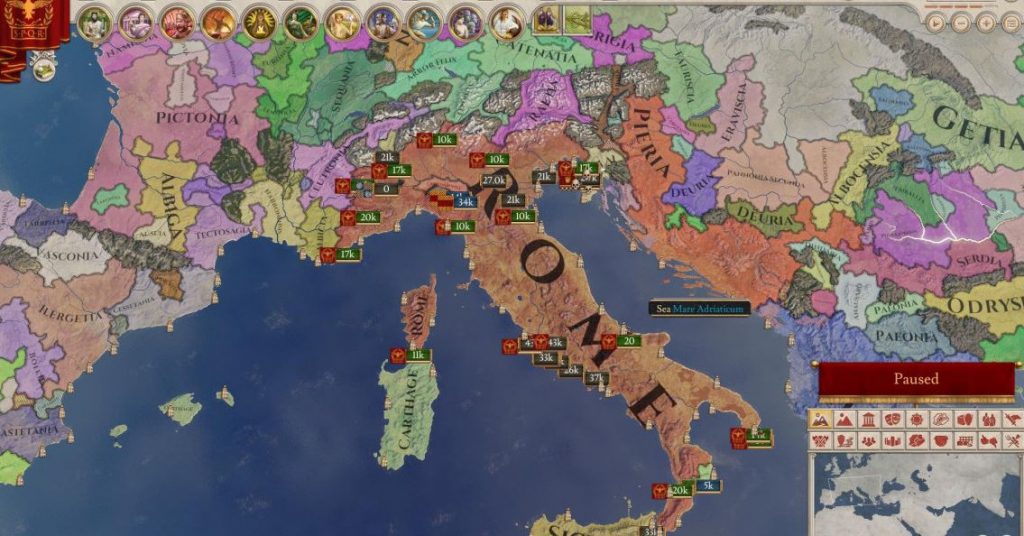 The asymmetry of the starting positions and the ensuing diplomatic relations that each country maintained from the start provides variety in the initial stages of each new game. Apart from that, however, the heavy focus on military conquest and the lack of options in both government and international relations place significant limits on the breadth and depth of strategic crafting available to the player.

A significant problem is the implementation of Paradox’s “mana” system, as it is popularly known. These are the sources of resources – military power, research, oratorio power, and religion – that you collect throughout the game and that finance many of your decisions. Mana increases as you play, based almost entirely on the randomly rolled stats of your leader and those you’ve assigned to your government. When you’ve saved enough, you can spend it on other disciplines for your troops, a small increase in income, or any number of so-called technologies.

However, the pace is everywhere. You can pause, buy, and pause a lot of different technology – and in the blink of an eye, your empire will improve its diplomatic relations or collect more taxes. It feels backward as if you don’t intend to invest something by investing in a particular source to work towards a strategic goal, but instead hitting patches on immediate problems. It’s not even that Imperator wants you to focus on short-term issues, it’s more than the game is quite happy to have you snapping your fingers to disappear problems magically.

Religious power is the most malnourished source of mana. Aside from a minor improvement that you can apply every five in-game years, the primary use of spiritual power to maintain the stability of your realm is itself a vague status that grants positive or negative modifications to your loyalty, popularity, and so on – by making a sacrifice to the gods. This dramatic-sounding gesture involves clicking a button to convert a variable amount of spiritual power into a single point of stability. That is it. And suddenly, the empire is stable again. 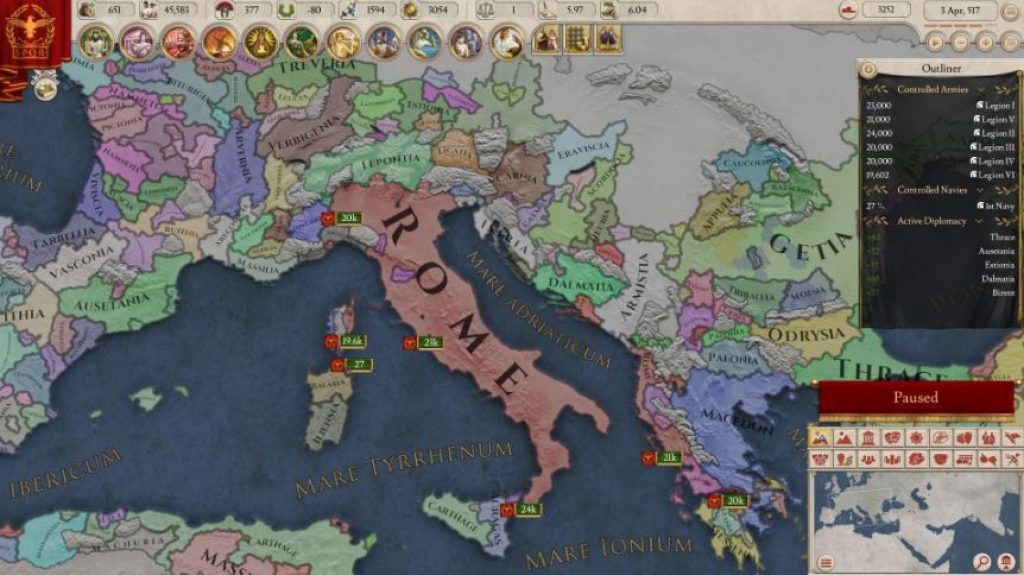 Indeed, there is a lot that can be easily turned around. At first glance, the diplomatic game looks sophisticated. You can send gifts and insults to other realms, form alliances, or undermine a rival’s current regime by supporting rebels, and more. The management of diplomatic ties between dozens of relationships should strike a balance between many competing interests, and sometimes the systems here allow for such finesse. But other times you can flip a switch, spend some oratorio power, and now Armenia doesn’t mind you making up a claim on Albania.

Elsewhere, many small choices add up to very few. When determining that trade route, do you want to ensure access to fish and the 0.02% population growth bonus? Or would you instead import precious metals and get 0.01 loyalty in your provinces? It’s hard to look at such numbers and understand how a particular choice can benefit your overall strategy. So you choose one, cross your fingers and, in all likelihood, forget about it for the rest of the game. Rulers should feel the weight of their decisions, and few such choices are substantial.

Imperator: Rome doesn’t feel overcooked. In its current form, it’s a strange mix of several of Paradox’s existing (and superior) games without discerning or recommending much. Paradox has recently prepared a “One-Year Plan” for the title to ensure players are aware of and plan to address the shortcomings. That roadmap does not seem essential to me, but we will see when we get there. Imperator: Rome remains a decidedly modest strategy game for now.