Compsmag is supported by its audience. When you buy through links on our website, we may earn an affiliate commission fee. Learn more
Editor choice
Reviews » MSI GS66 Stealth Review

When I first started watching thin-and-light gaming laptops, it was a game of compromise. Do you want the performance at the expense of battery life or vice versa? Those days are over with the latest MSI GS66 Stealth. Priced at $2,699, the Stealth is a bit expensive, but that high price nets you a laptop with powerful gaming, graphics, and overall performance thanks to an Intel’s 10th Gen Comet Lake processor and an Nvidia’s Super Max-Q GPU. Throw in a fast SSD and the biggest battery, and you have a bona fide winner. Is this peak gaming nirvana? Not entirely, but it’s a step closer. This is our MSI GS66 Stealth Review. 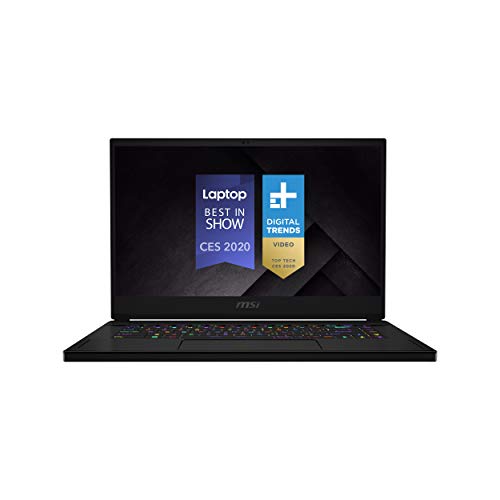 Always bet on black, especially if it looks like the Stealth. MSI has stripped all the accent colors of the design, leaving an elegant Core Black aluminum chassis. Even the dragon emblem, which is usually executed in a bright color, has been toned down to a semi-glossy matte that still attracts the eye. The sandblasted metal invites to touch while resisting fingerprints, so feel free to give it good friction.

You get more of that opulent onyx when you open the lid. I favor the raised palm rest, which matches the height of the loudspeaker grille at the top of the deck. The keyboard is in the abyss. The hinges are quite sturdy and leave the display completely flat in case you want to share your screen. Along the base of the laptop, there is a reasonably large vent and a pair of rubber feet to give the laptop some space to blow out hot air.

The Stealth has a lot of ports along the relatively slim sides. You have a USB Gen 3.2 Type-C port on the right side, along with a pair of Type-A USB 3.1 ports, an Ethernet port, and a headphone port. On the left, there is another USB 3.1 Type-A port, a Thunderbolt 3 port, a full HDMI port, and an AC connection.

Depending on how you customize it, the MSI GS66 Stealth’s keyboard can be a treasure trove of glittering gems. But the full-size island-style Stealth keyboard is more than just an engaging light show. It’s quite a comfortable means of typing. The keys are spaced appropriately with brilliant backlighting so that I can see the font on the keys.

Like most MSI laptops, the Stealth keyboard uses SteelSeries software — in this case SteelSeries Engine 3. The tool provides customizable illumination per key, using 16.8 million colors to get the job done. However, if you don’t want to design your RGB creation carefully, the SteelSeries button in the function key row allows you to cycle between eight dazzling, pre-configured profiles.

Want more functionality? Try the GameSense function, which synchronizes the lighting for certain games to blink or flash when something important happens. For example, in Counter-Strike: Global Offensive, you can map specific keys to respond to getting kills and scoring a headshot, along with keeping tabs on your health and ammunition. You can also assign different macros on a single key. And all your settings are stored in the cloud with the CloudSync feature for use wherever you go.

Despite the unusual width of the 5.5 x 2.5-inch touchpad, I’ve never had any trouble rejecting my palm, even when my hands have accidentally brushed the surface. When it was time to use the touchpad, it efficiently performed Windows 10 gestures, including pinch-zoom, two-finger scroll, and three-finger tap. The bottom corners of the touchpad provide reliable feedback with an audible click.

The matte displays can be best because they eliminate any possible glare, but there is also a danger of washing out colors. Fortunately, the Stealth’s 15.6-inch, 1920 x 1080 pixel panel doesn’t fall into that trap. When watching The Lovebirds trailer, my eyes were immediately drawn to actress Issa Rae’s plum leather jacket, which is beautiful in itself, but only helped to accentuate the actress’s warm brown skin and the copper in her braids. The details were so clean that I could easily see the hairline cracks in the windshield, made by an unfortunate delivery boy being beaten.

Playing “Trials of Mana” on the display of the Stealth was a joyful experience with lively emeralds, violets, and cerulean. The details were quite precise that I could see small cracks in the castle walls while looking for my next goal. The 300Hz refresh rate made the graphics look even smoother than the average gaming laptop.

The Stealth delivered vibrant colors thanks to its ability to reproduce 116% of the sRGB color gamut. It’s better than the Zephyrus (109%) but lagged behind the average of 145% of premium gaming. The Acer Predator was slightly better at 117%, while the Razer Blade 15 and its OLED panel excelled at 243%. When measuring brightness, the Stealth averaged 321 nits, beating Zephyrus (249 nits) and Predator (277 nits). However, it could not exceed the 330 nits average, nor the 438 nits of the Blade.

If the color looks a little off, you can change the presets in the MSI True Color utility. With six presets (Gamer, Movie, Anti-Blue, sRGB, Office, and Designer), True Color adjusts the color temperature for an optimal viewing experience. I prefer Gamer and sRGB because they deliver the most vibrant colors.

Usually, MSI and Dynaudio form a formidable team when it comes to audio. But there is something wrong with the GS66 Stealth. Don’t get me wrong; it’s loud enough to fill my small living and dining room. But while listening to Michael Jackson’s “The Lady In My Life” or Redman’s “Lite 1 Witcha Boi”, I noticed a very high pitch with only a hint of bass. At maximum volume, it was quite grating. I tried to switch the presets (Music, Movie, Communication, and Gaming) in the pre-installed Nahimic audio software, but without any real effect.

The MSI GS66 Stealth is one of the first gaming laptops I have reviewed with Nvidia’s new Super GPUs. Super is the latest addition to Nvidia’s 20 series chips, which are expected to deliver 50% more performance over the current generation of discrete chips. The laptop, with its Nvidia’s GeForce RTX 2080 Super Max-Q GPU, achieved 102 fps (frames per second) during the Rise of the Tomb Raider benchmark, which we ran at 1920 x 1080 on Very High settings.

It quickly crushed the 67 fps premium gaming laptop category average. The Acer Predator and its RTX 2080 Max-Q GPU got 62 fps, while the ROG Zephyrus (RTX 2070 GPU) and the Razer Blade (RTX 2080 Max-Q GPU) both reached 50 fps. When we ran the Hitman test, the MSI GS66 reached 113 fps, exceeding the premium laptop average of 109 fps. This separated the competition a lot, with the Acer Predator, Razer Blade, and the ROG Zephyrus reaching 86, 79, and 69 fps, respectively.

On the Grand Theft Auto V benchmark, the MSI GS66 matched the category average at 82fps. The Razer Blade was hot on its tail at 81 fps, while the Zephyrus and Predator reached 75 and 60 fps.

In the Far Cry: New Dawn test, the Stealth scored 86 fps, just away from the 83 fps average. The Blade scored 80 fps, while the Zephyrus only achieved 48 fps.

To test the Stealth’s VR capabilities, we ran VRMark Blue, one of the most demanding VR tests available. The MSI Stealth notch 2,394 is just below the average of 2,642. Still, it’s just enough to beat the Razer Blade and the ROG Zephyrus, which scored 2,348 and 2,256, respectively.

In times when you’re not fighting the world, the Stealth switches to the integrated Intel UHD Graphics for less demanding tasks such as watching videos.

The MSI GS66 Stealth is also the first laptop I’ve reviewed with one of Intel’s 10th Gen Comet Lake H-Series processors. The 14-nanometer 2.6-GHz Intel Core i7-10750H processor of the laptop is as strong as an ox, ably streaming Seis Manos on Netflix with 30 Google Chrome tabs, some with Twitch, Tweetdeck and YouTube running in the background.

During the handbrake test, the MSI GS66 Stealth transcoded a 4K video to 1080p resolution in 9 minutes and 25 seconds, which is slightly slower than the 9:07 category average. However, the MSI Stealth was faster than the competition, with the Acer Predator, Razer Blade, and the ROG Zephyrus completing the task in 11:04, 11:56 and 12:44, respectively.

To make sure you can take your games with you on the road, MSI has equipped the Stealth with a 99.9 Watt battery. It’s the most massive battery the TSA allows in an airplane. The MSI GS66 Stealth lasted 6 hours and 36 minutes on our battery test, which consists of continuous surfing the web over Wi-Fi with 150 nits of brightness. It won’t get you through an entire working day, but that time makes it one of the longest-lasting gaming laptops around. The Zephyrus lasted 5:47, while the Razer Blade 15 and the Acer Predator clocked in with times of 4:12 and 3:04.

I enjoyed the $2,699 version of the laptop, which doubles the RAM, bumps the graphics card to an Nvidia RTX 2080 Super Max-Q GPU with 8GB VRAM, and takes the screen refresh rate to a wild 300Hz. The $2,999 iteration disk kicks it up even further with an overclockable 2.4GHz Intel’s Core i9-10980HK CPU and a 1TB NVMe SSD storage.

The MSI GS66 Stealth is a bubbling font of awe. From its stellar graphics and powerful overall performance, lightning-fast SSD transfer speeds, and surprising stamina, there’s only a lot of gain under that 0.7-inch chassis. Not to mention the beautiful display and customizable keyboard. My only real gripe is the audio. I have become so used to MSI, Dynaudio, and Nahimic that it is surprising when the sound falls out of the park.

If you’re in the market for a gaming laptop with a brighter, livelier display with similar performance, I’ll suggest you the Razer Blade 15 and its enchanting OLED panel. But if you’re looking for a near-perfect combination of performance and endurance in an incredibly light, slim chassis, the MSI GS66 Stealth is the right choice.

The MSI GS66 Stealth gives you serious overall and gaming performance with over 6 hours of battery life in a lightweight, ultra-thin chassis.