Compsmag is supported by its audience. When you buy through links on our website, we may earn an affiliate commission fee. Learn more
Reviews » My Friend Pedro Review
Reviews

My friend Pedro’s best moment is the first time you can use a skillet to kill someone. This is an action game that bends backward to keep you looking cool, with every murder meant to make you unique, and the skillet is the best realization of that vision. The bullets in My Friend Pedro will bounce off particular objects. If the corners align precisely like – the first time you encounter a frying pan – you can kick the kitchen utensil in front of you, and then take out all the enemies in that room by shooting at the pan, watch the bullets ping off and cut through everyone nearby. This is our My Friend Pedro Review.

My Friend Pedro Review: About

My Friend Pedro feels like a beautiful, cheeky ballet. The game is entertaining for most of its run time, precisely because of how exaggerated and theatrical its killings are. Killing enemies by firing a frying pan, firing your shots off a plate, or kicking an object straight into someone’s face is entertaining. However, this is also a game that has fewer tricks up its sleeve than it initially suggests and goes through most of its good ideas just after halfway. That’s not to say the game gets bad – it’s fun all the time – but it’s starting to feel less inventive and exciting than those beefy, crazy previous levels.

You play as an unnamed masked protagonist who is accompanied on his violent journey by Pedro, a talking banana, which is both narrator and instructor throughout the game. It is clear early on that there is something wrong with Pedro, and while there are some “revelations” to contend with, he is usually there to give the game a sense of madness and to give hints and tips as you go. 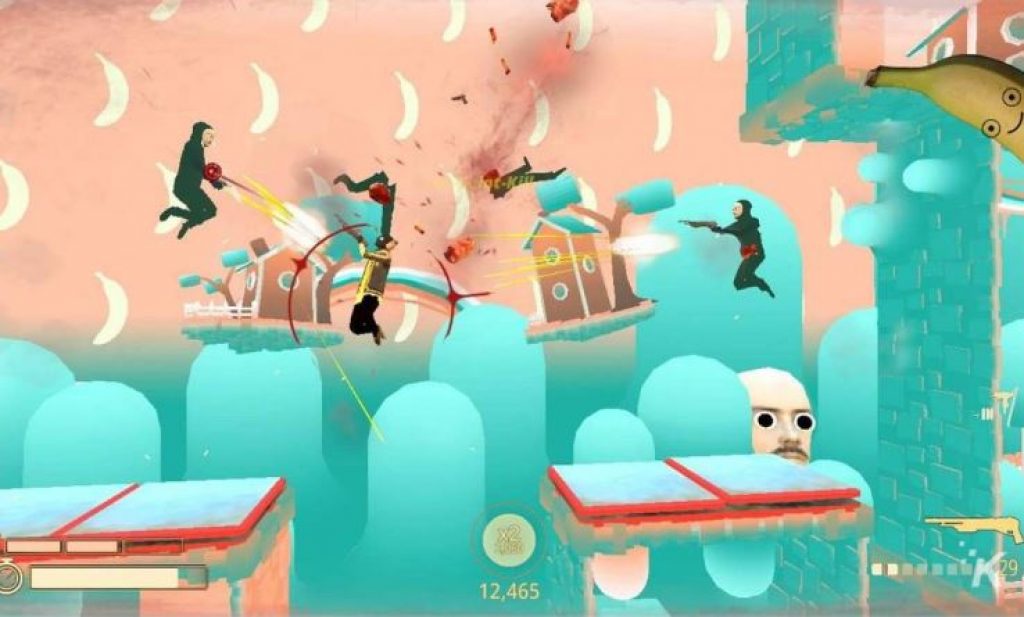 There is a thin plot, but it is easily ignored – the only essential information is that you have to run through every level to kill all enemies, and if you kill each enemy quickly without dying, you will get a higher score. There’s a score multiplier that allows you to link kills for more points, and trying to compete for a solid spot on the scoreboard is a good incentive to replay previous levels on more challenging difficulties.

As you chain together, shoot through the 40 levels of the game, can shoot enemies as you zip-line, ride on top of rolling barrels, jump through windows, skateboard, and bounce against walls. You can activate your focus at any time to align your shots and time your bullet-avoiding spins perfectly. If you have two weapons, you can aim them separately so that you can dive into the middle of a group of enemies with double Uzis blaring in different directions.

For the most part, it’s a pleasure to shoot down your enemies, but the combat isn’t without flaws. The game’s standard automatic aiming assistance locks you to the nearest enemy or potential target when you point your reticle in their direction, which can sometimes make it harder to perform the stunt you envisioned. For example, if an enemy is in front of an explosive canister, it’s hard to aim past them for that satisfying explosion because your gun sight won’t pull away from them.

Fortunately, you can set the automatic aiming to almost nothing, which gives you more freedom at the expense of the game, in general, more challenging. My friend Pedro suffers a bit from a lack of enemy variety. As the style of the goon, you face changes over time – you fight assassins in the second set of levels, and professional gamers not long after – it the main difference is that some of them have more health than others. 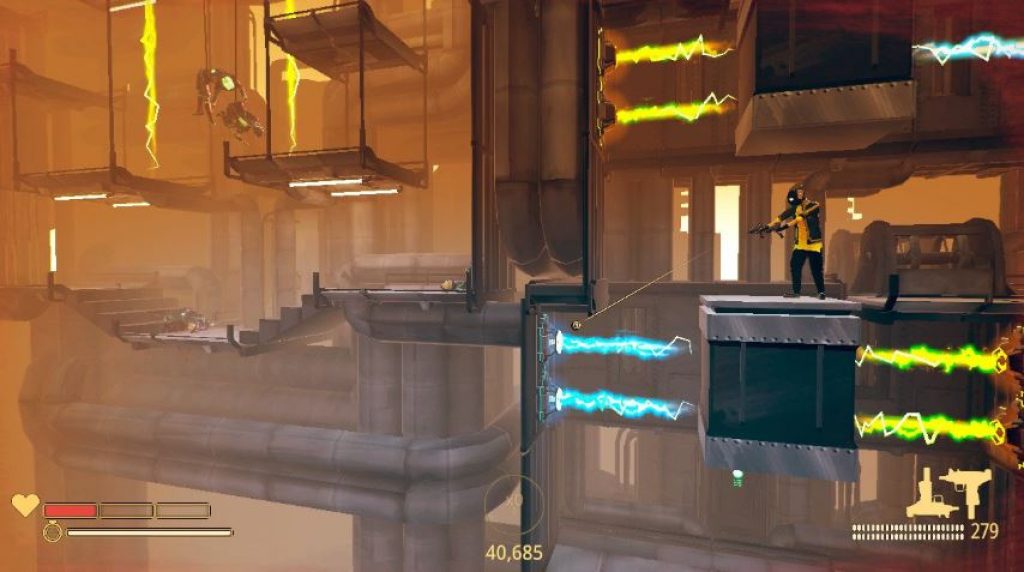 There are some minor variations, but most enemies can be eliminated in precisely the same way: by pointing and shooting, with or without theater. Your enemies will fire back with ever more powerful weapons. While you can feel untouchable when diving into a room in slow motion, they fight enough, even on “Normal” difficulty, that you have to be careful.

Occasionally you may also have to deal with a sentinel or a minefield, but the game is at its best when you prove your superiority over organic enemies. The Matrix inspires those slow-motion hail dives of enemy bullets visibly creeping towards you through the air, and My Friend Pedro is getting closer to capturing the feel of that movie’s shootouts than many of the countless games that pay homage to it.

There are also a few boss levels you have to deal with, which are short distractions that attempt to mix things up, but even these peaks with the first. The game goes through most of its ideas for creative ways to kill people pretty quickly, and while that sense of wonder never completely dries up, the great moments get more spread out in the second half.

In later stages, the game includes numerous platform sections to keep things fresh. They are never complicated enough to make you think, and some of them suffer from the game’s finicky controls. While the movement buttons are great for combat, they are often difficult to combat when trying to traverse challenging terrain. When asked to roll, jump and slide with high precision, as you sometimes are, the game stumbles as the controls don’t lend themselves well to precise platforming. This only gets big at the end as the last few levels get extra demanding.

The level designs also get uglier the more you go. When Pedro explains that you are fighting gamers in the sewer because video games often include sewer levels, it’s funny but not funny enough to justify the dull aesthetic the sewers display. That’s not to say these levels are devoid of joy – a late mechanic giving some enemies shields to deactivate adds an excellent strategic depth, and most levels offer at least one or two sections where you can make some cool moves. But generally, they are not as free and enjoyable as the game is at an early stage. 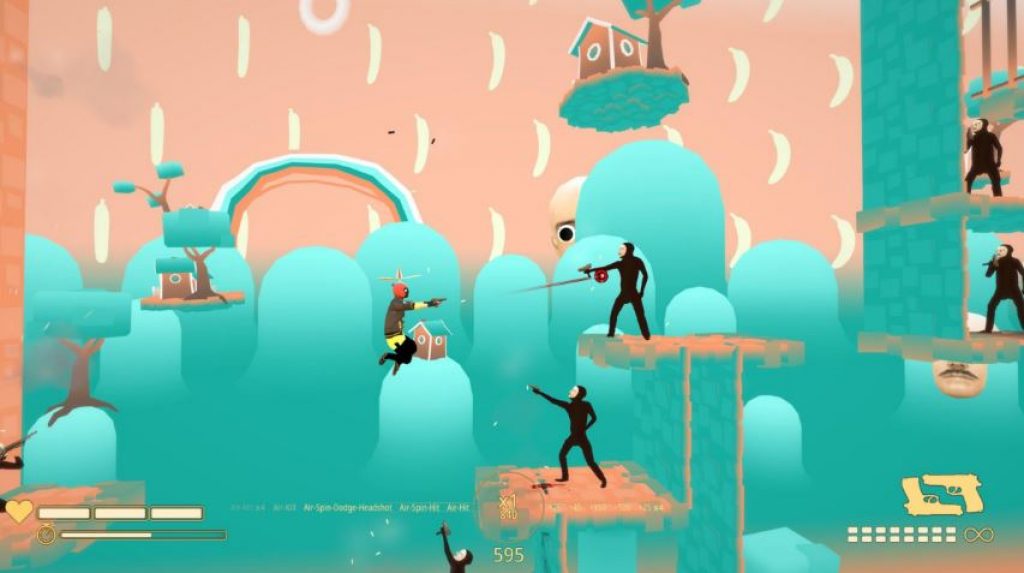 There is some padding, and the game suffers when there are no enemies on the screen. Strangely enough, it’s also less entertaining when you access more powerful weapons – the late addition of a sniper rifle feels fundamentally at odds with the game’s close-and-personal action. And while the assault rifle unlocks you in the second half of the game is powerful and fun to fire, it’s a pity they haven’t gone a step further with their wildness.

You dual-wheel the best weapons for maximum carnage. My friend Pedro is best if you’re close enough to the bad guys to justify continuous cost-benefit analysis from running and kicking. Still, sometimes the best way to make progress is to take out your enemies from a distance by pointing and without much flair. But then you can jump on a skateboard through a window, jump and spin through the air in slow motion while firing Uzis at two enemies at once.

When you kick an explosive bus around a corner and jump out to shoot it just before it hits an enemy in the face; or if you jump between two walls, jump out of an opening and take out two men with a shotgun before they even know you’re there. My Friend Pedro can break through the later stages with less exciting moments, but the moments that make the game fun never completely go away. As soon as I finished the game, I restarted with a higher level of difficulty and wanted to test my improved skills on harder enemies.

There are sections in My Friend Pedro that are as satisfying and exciting as you could hope for in a game like this, where it feels like an impossible video game hero who can perform the unimaginable with great style and flair. There’s a lot of appeal in playing your favorite stages over and over again, trying to move up the rankings. It’s not always exciting throughout the campaign.

Still, My Friend Pedro is worth playing because it’s full of moments where you can jump off a shaft and shoot in two directions in slow motion, or kill an enemy by hitting kick the skateboard that you ride in their face, or use a skillet to knock out a room full of bad guys. When committed to making you inventive and weird with how you throw your murders, My Friend Pedro is immensely enjoyable.

My Friend Pedro feels like a beautiful, cheeky ballet. The game is entertaining for most of its run time, precisely because of how exaggerated and theatrical its killings are.