Razer has worked in good faith to provide a membrane keyboard with several relevant and useful functions, such as individual profiles, a game mode, and full RGB illumination per key. The whole package costs only $60, which is quite less than even a mechanical model without ten keys of a well-known brand. On the other hand, the keys of the Cynosa V2 don’t feel right, both for productivity and gaming. This is our Razer Cynosa V2 Review. 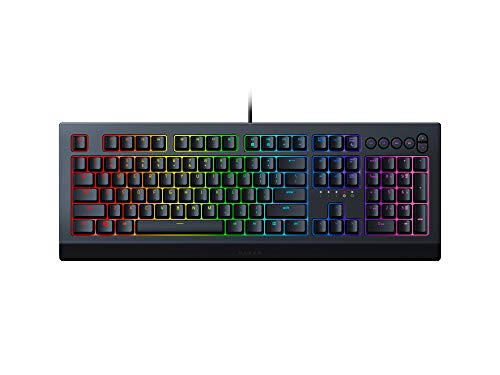 Typing is slightly slower and less accurate, while the gaming performance feels less satisfactory and direct. The Cynosa V2 is also hampered by its large, bulky profile and a difficult procedure to activate the lighting per key. The Razer Cynosa V2 is not quite one of the best gaming keyboards, but it is a solid investment for those just starting in the PC gaming space.

Without the RGB lighting, the Razer Cynosa V2 could be confused with an office keyboard. This is both a good and a bad thing. Although I like that the Cynosa V2 doesn’t scream “gaming keyboard,” it doesn’t scream anything else. It is a black keyboard with a small Razer logo at the bottom. There are no other decorations. On the other hand, the Razer Cynosa V2 has almost all the physical characteristics that I like to see on a keyboard.  There is a cable guide system at the back and a set of media keys in the upper right corner. (This is a considerable improvement over the first Razer Cynosa.)

The elongated bottom is not precisely wrist support, but it’s better than not providing wrist support at all. Anyway, the Cynosa V2 is clear – and on top of that, it is large. At 6.1 inches, the width is not that bad, but at 18.2 inches, you need a powerful desk to support it. Other companies have shown that you can squeeze a functional full-size keyboard in 17.5 inches or less, and it seems that the Cynosa V2 could have saved some space, especially at the right and left edges.

The main reason why the Razer Cynosa V2 does not cost much, as gaming keyboards go, is because it uses membrane keys instead of mechanical key switches. While I recommend mechanical keyboards, their high prices make them unaffordable for neophyte PC gamers. As membrane keyboards go, the Razer Cynosa V2 is thoroughly OK, although the feeling is not radically different from a Dell, HP, or Microsoft office model.

Qualitatively, the keys of the Cynosa V2 are unobtrusive. You press them; they give tactile feedback, they jump up again. The keys cover a comfortable distance, and the letters are well spaced. However, their use is not satisfying; they are quiet and do not feel much.

They’re not great for typing either. Using a Typing.com test, I scored 116 words per minute with 96% accuracy on the razer Cynosa V2, compared to 130 wpm with 98% accuracy on my usual Logitech G810. Whenever I had to guess, register, or spring, the keys don’t come back as fast as their mechanical counterparts.

In terms of performance, I had no complaints about the Razer Cynosa V2. The keys may not be as sharp or resilient as those of a mechanical model, but that is not a concern when playing single-player games, or multiplayer games at a casual level. Although the response time is probably essential at the highest level in a fraction of a second, I haven’t noticed any difference in input between the Cynosa V2 and the Logitech G810.

I have tested the Cynosa V2 with Doom Eternal, Shadow of the Tomb Raider, Age of Empires II: Definitive Edition, and World of Warcraft. The overall performance was excellent, whether I jumped between the demons and smashed them to pieces, or ran away from hordes of warriors in ancient catacombs. The Cynosa V2 is perfect for the everyday game, although, as said, I would hesitate to dive into tournament-grade multiplayer competitions.

When the first Cynosa came out a few years ago, I liked it, but I was not too fond of it. I feel the same about the successor, as our Razer Cynosa V2 review was discussed. While the keys are like this and the design is clear, the device offers all the features that you would expect from a gaming keyboard at a reasonable price. In the same price range, I think that the SteelSeries Apex 3 is also worth considering because it costs $10 less.

However, the Cynosa V2’s Game Mode alone could be worth the difference in price. If you can save for a mechanical gaming keyboard, that would still be my first recommendation. But if the membrane is your primary choice, the Razer Cynosa V2 could very well be the gaming keyboard you’ve been waiting for.

The Razer Cynosa V2 offers decent RGB functionality and a few helpful bells and whistles, although it never completely surpasses its membrane design.