Compsmag is supported by its audience. When you buy through links on our website, we may earn an affiliate commission fee. Learn more
Reviews » Razer Huntsman Mini Review
Reviews

When it comes to the best gaming keyboards, Razer offers a lot of options. The Huntsman Mini is the latest member of Razer’s consistent (if a little pricey) family. The Mini comes in two versions: Clicky ($119.99) and Linear ($129.99) optical switches. For this review, Razer provided a model with linear optical switches. And so with that, let’s continue with our Razer Mini Huntsman Review. 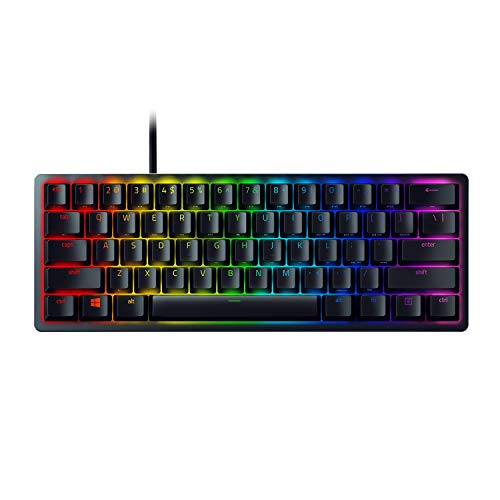 The Huntsman Mini has a form factor of 60%, but that space-saving design involves costs: There is no function row, no home cluster or arrow keys, and of course, no number keys. Even the chassis of the Huntsman Mini is finished, with almost no frame around the keys. Visually, this results in a very sharp looking addition to any PC gaming setup. However, the version of the Huntsman Mini is occasionally awkward, and the lack of additional keys requires some getting used to.

With a length of 11.5-inches and a width of 4.1 inches, the Huntsman Mini is indeed a few inches smaller than the Huntsman Tournament Edition. It’s higher than the average keyboard at 1.5 inches, thanks to a raised design that makes it look like the keys are floating above the frame. Both the linear and clicky models come in black or white. Our assessment unit is in black, with PBT keys and a matte finish that adds a level of sophistication to the keyboard’s aluminum built.

There are options for getting red or purple optical switches underneath the keys. Still, you will be forgiven for not noticing the difference as they are not visible during regular use. The Mini also has a removable USB-C-to-USB-A cable that can be easily stowed away when not in use.

Finally, the keyboard has two adjustable feet with indicators that allow users to support the keyboard at nine or six degrees. These feet are longer than those of a standard USB keyboard. With the Huntsman Mini’s raised key design, having multiple raise options doesn’t feel strictly necessary, but it’s a nice bonus for gamers with specific preferences.

How can a keyboard maintain its functionality while eliminating about a third of its keys? Many of the keys of the Razer Huntsman Mini have additional functions on the side, which you can activate with the function key or by using Razer’s software to map your configuration. These additional functions are easy to find thanks to the raised design of the keys, although it still feels strange to use the I, J, K, and L keys as arrows.

Even though the results of my typing tests were worse, physically pressing the keys felt immensely satisfying after years of using mostly laptop keyboards. Also, unless you’re the type to hit the keys, typing is virtually silent for the version with linear optical switches.

Before working on the configurations or RGB options, I ran the Huntsman Mini through a few dozen turns of Sid Meier’s Civilization VI, my go-to PC game. It’s not as fast as the competitive games the Mini was designed for, but as a title that relies heavily on the arrow keys (rather than WASD), I was curious to see how the secondary functions, well, worked.

To use the arrow keys with the Mini’s default setting, I had to hold down the Fn key while pressing I, J, K, and L. It’s not exactly comfortable or intuitive, and it didn’t take me long to find a better solution in Synapse. In about a minute, I created a Civ-specific profile and mapped out the arrow keys on the W, A, S, and D keys. Once back in the game, the new configuration worked precisely as intended. That said, Civ veterans know that the strategy game often lets you rest your hands on your keyboard while you wait for other players and consider your tactical options. Hence, it still wasn’t as comfortable as just using my gaming laptop keyboard.

Next was Fall Guys, an online “party royale” that has dominated the streaming scene since its release in early August. As a stupid, frantic, and appropriate multiplayer game, Fall Guys felt like a perfect match for the Huntsman Mini without even having to redesign any keys. Although I usually prefer a controller for this game, I managed to make it to the final round several times with the Huntsman Mini. This only underlines that the Huntsman Mini achieves its real purpose as a space-saving keyboard for competitive gamers.

Our Razer Huntsman Mini review explains how the peripherals perform well. The price tag of $130 is steep but not too expensive. However, for the same price as the ten-digit Huntsman Tournament Edition, there’s no reason to choose the smaller version unless you prefer a minimalist approach. It comes down to personal preference, but also to what you plan to use this compact keyboard for.

Just like the keyboard of the Huntsman Tournament Edition before that, the Mini does what it promises. It reduces the standard keyboard to 60% of its size while maintaining full functionality through secondary commands and configurable setups. However, beyond its intended purpose, the Mini is not a comfortable everyday driver, so its use is limited. If you want to travel light and take up as little space as possible in your quest for gaming glory, the Huntsman Mini is the right choice. Otherwise, stay with a slightly larger keyboard and get the arrow keys back.

The Razer Huntsman Mini keyboard works well for competitive play, but the lack of a function queue and traditional arrow keys takes some getting used to.