Compsmag is supported by its audience. When you buy through links on our website, we may earn an affiliate commission fee. Learn more
Reviews » Sea Of Solitude Review
Reviews

Loneliness exists in a broad spectrum that is not always synonymous with being alone. It is a state of mind, an overwhelming sense of isolation that can still affect a person even when surrounded by loved ones and friends. The Sea of ​​Solitude game understands this all too well. Sea of ​​Solitude is a game about the loneliness that is very personal for the 12-strong team of German developer Jo-Mei Games, and it shows. This is our Sea Of Solitude Review.

Sea Of Solitude Review: About

It deals with the subject with an agile touch. It explores the myriad ways in which these feelings of isolation, sadness, and anger can authentically affect people’s lives, using the background of a puzzle platformer to tell his story. You play as Kay, a young woman who lives in a world where lonely people are turned into monsters. Kay is a monster herself, so she desperately tries to figure out why this happened and how to return to her human form.

The rest of the story comes from this core concept and forces Kay to confront her past and her relationships with the people around her. Loneliness affects people in different ways; a lonely child struggling to make friends at school has different needs than someone who is breaking up or someone who has just moved to another country where they don’t know anyone. Sea of ​​Solitude sheds a reflective light on the different ways loneliness can affect people, through Kay’s interactions with other characters and the monsters in this world, whether antagonistic or seeking help. 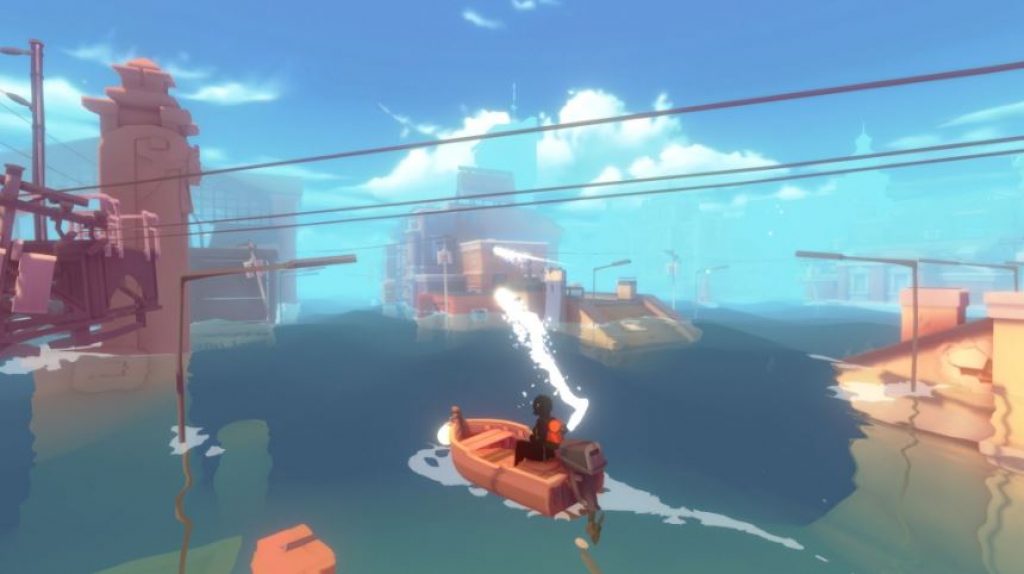 The voice actors at these times are uneven among the small cast of characters, but the consistent writing is a strong point everywhere. Conversations feel very raw and are often uncomfortable, but Sea of ​​Solitude manages to sprinkle in moments of frivolity to make up for the otherwise dismal content. The ending lacks a very realistic and human way of closing, but the profound line of self-discovery and healing of the story naturally reaches an empowering conclusion.

Every aspect of Sea of ​​Solitude has some sort of underlying meaning, and these are often conveyed through the use of both literal and figurative metaphors. The sea is one of the most egregious allegories at its disposal, as the whole play takes place on the undulating waves of a flooded city. Being alone on a small boat is insulating by nature; you just have to imagine the terrifying feeling of being stranded or adrift at sea, far away from civilization in an unpredictable environment that can diverge from calm to violent in an instant.

Kay uses this small craft to traverse the flooded streets of the Berlin-inspired city and uses several essential platforms to get around on dry land. Her interactions with the various monsters that populate the city are the catalyst for everything that follows. The design of each monster has a familiar character, with the vast majority reminiscent of specific animals, albeit in a fantastic way. Each shares a common trait in the form of jet black fur and disturbing red eyes, but they are often human at their core, transformed into monsters because of their diverse struggles with loneliness and fear. 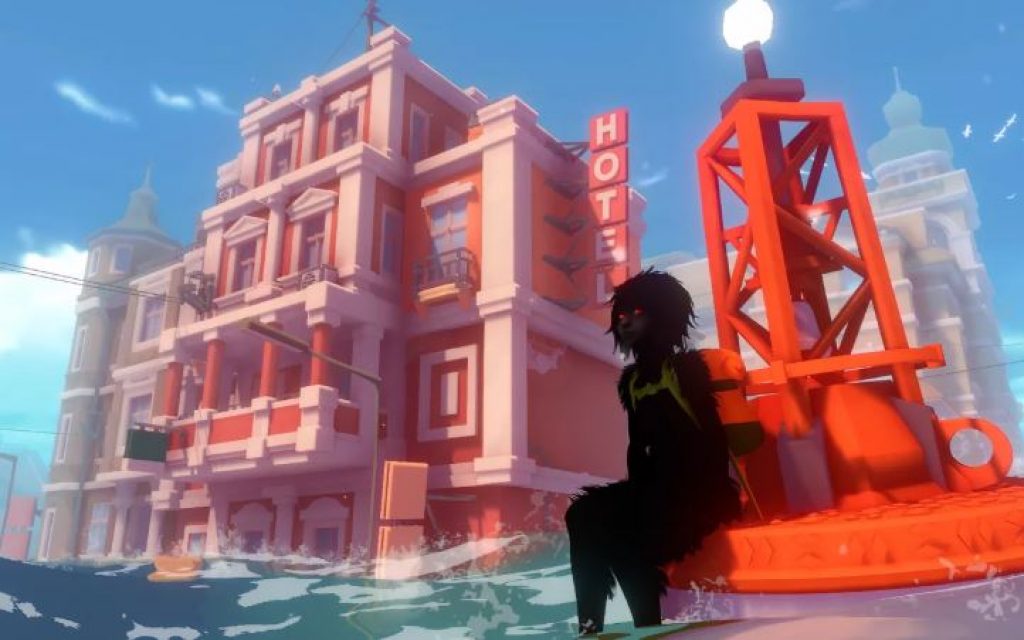 You spend much of the game to take the human side out of these creepy beasts by confronting Kay’s past and dispelling the corruption that has seeped into town. Damaged areas are gloomy and covered in muted shades of gray and black while swirling winds and torrential rain ravage the night sky. Removing the corruption in a field by finding and breathing it in Kay’s backpack introduces light to the world, reveals the glowing vitality of the sun, and turns the sea as blue as the sky.

The significant contrast between day and night accentuates the beauty of the day. At the same time, the painterly art style – not to mention the nautical theme – cannot help but remember the vibrant aesthetic of The Legend of Zelda: Wind Waker. It is in these moments that the “Solitude” of the game’s title is captured, which presents the positive side of being alone. However, spreading the corruption is a task full of dangers and not just for Kay’s mental well-being. Some monsters are aggressive and attack sight. 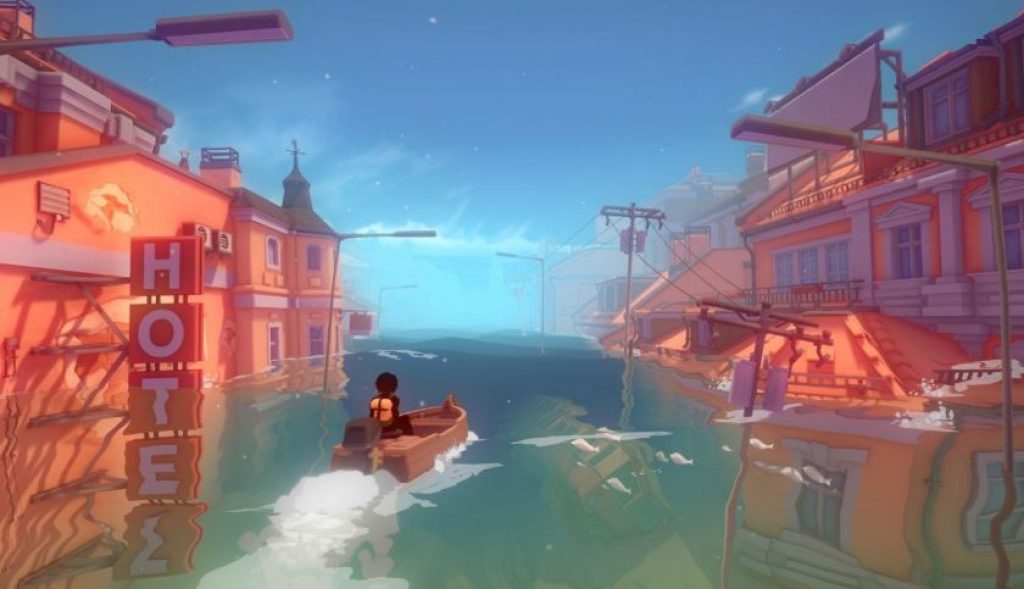 Death is not much of an obstacle as you are immediately returned to where you left off, but Sea of ​​Solitude manages to squeeze moments of tension out of these interactions. The problem is, despite a short three-hour playtime, it introduces new mechanics every few chapters and then drags them out until they are downright monotonous.

There are countless occasions when you need to attract spectral children to the light by running close enough to offend them, for lack of a better term, before they run away. It’s all relatively simple, which is not a bad thing in itself, but playing Sea of ​​Solitude is never particularly engaging and usually consists of boring machines that are far behind their welcome.

The story and way it confronts a universal, but often misunderstood part of life is Sea of ​​Solitude’s most considerable appeal. The gameplay is reasonable and tedious at worst, but this is still a journey worth experiencing because of how Jo-Mei Games managed to weave a heartbreaking story out of real characters and credible grief. Kay wants to know why she became a monster, and this is the driving force behind the whole game. Despite some mistakes along the way, the Sea of ​​Solitude is hard to put down until you can answer those questions yourself.

Sea of ​​Solitude is a game about the loneliness that is very personal for the 12-strong team of German developer Jo-Mei Games, and it shows.