Compsmag is supported by its audience. When you buy through links on our website, we may earn an affiliate commission fee. Learn more
Reviews » SolSeraph Review
Reviews

SolSeraph is openly inspired by the Super NES cult classic ActRaiser. If there was any doubt about its origins given the combination of action platforming and sim-style management, it was removed when it opened with a slow-spinning first-person view that ran to Earth – a tribute to ActRaiser’s Mode-7 showpiece so specific that it winks to the audience virtually. Oddly enough, it’s some of SolSeraph’s departures from ActRaiser that have left it alone, for better or for worse. This is our SolSeraph Review.

SolSeraph takes you in the divine boots of Helios, the Knight of the Dawn, as he helps build a civilization and fight against a series of younger gods, all manifesting themselves as the embodiment of a natural disaster. There is a mishmash of religious iconography at stake, and Helios looks mostly angelic, but this is not tied to a specific belief. Instead, SolSeraph invents his mythology and borrows bits and pieces from world religions.

All five territories consist of two different game types. For starters, fight through monsters to unlock a new civilization. Each is housed in its environment type that presents its own set of hazards. For example, an island nation is prone to constant flooding, while the snowy northern tribe struggles to maintain farms and relies instead on livestock. You guide the people to manage/control their population and resources, such as food and lumber, while also building defensive structures to ward off monster attacks. 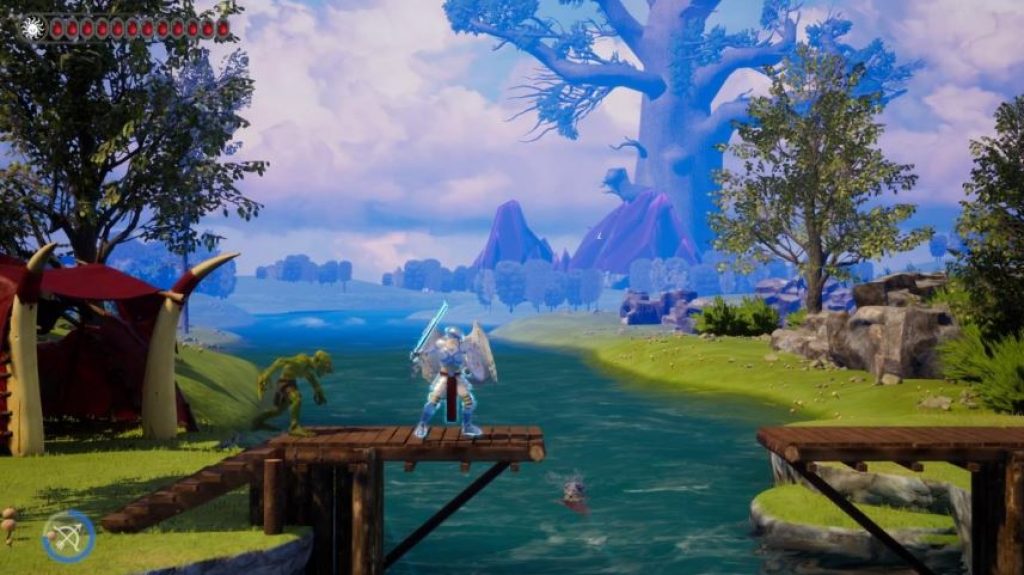 Then you can make a temple near one of the monster rooms, take part in another action platforming or arena battle to clear it up and continue until you unlock the last part where the younger God boss is. This may all sound very familiar to ActRaiser fans, but the focus on defense against waves of monster attacks is a wild departure. SolSeraph’s approach is more like a tower defense game, as the waves of monsters all march on a fixed path to a centralized base marked by a campfire.

Defeating waves of monsters requires different defense structures, and even deserves its role in the radial menu, along with the divine powers to summon lightning or send a guard. It takes the previously minor threat of monster attacks and makes it much more active and central to the experience. On the one hand, this change makes the sim portions feel much more dynamic.

Protecting your people from relentless waves of monster attacks can be much more hectic than the relaxed, casual feeling of watching your society grow and occasionally guiding your people in the right direction. On the other hand, this approach is at the expense of what made ActRaiser such an exciting study of faith.

In ActRaiser, society grew naturally as you sent it lightly, and your tools were limited. You could summon an earthquake to destroy homes and encourage more reliable building, but you couldn’t accurately place each building on a grid. In some ways, ActRaiser acted as a reflection on the limitations of divinity. Interactions were indirect, and the stories that took place were sometimes tragic. People assumed it must be the will of a higher power, but in reality, you were not able to stop some of the events they set in motion of their own accord. It is a powerful idea that is undermined in SolSeraph by having such direct control over everything your civilization does. 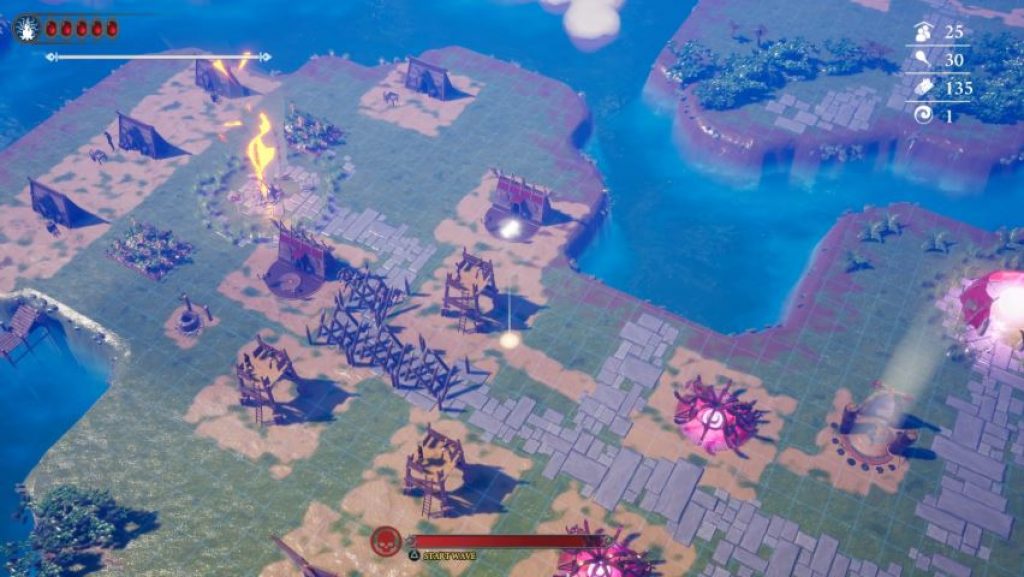 The spirit is still there, to some extent. People pray to Helios without ever having heard an answer, so the idea is still present that they operate on faith and hope that some merciless deity will end their struggle. But this is only present in short story sequences, and it conflicts with the mechanics of the game itself. There is no sense that the culture is flourishing on its own. You don’t lead as much as you dictate, which strangely goes out of sync with the idea that people have unproven confidence in a higher power.

Functionally, the SIM segments are simplistic but often not intuitive. Monster waves don’t happen often enough that it’s easy to build up a massive arsenal of defenses before the first attack ever comes. There is no penalty for failure, and in fact, getting a game over the screen will reset the monster clock from scratch while retaining all your recent construction changes. At the same time, it is not always clear where the samples come from or in what numbers.

Building temples to remove monster spaces depends on meeting a threshold of “souls,” which are collected from defeated monsters. This can be unreasonable in a game about a god who gathers worshipers, who can logically also be considered souls and connect more sensibly to building a temple of worship. Instead, the population matters only because it gives you bodies to assign to defensive structures. There is no counter for your total number of accredited versus inactive villagers, meaning you can accidentally reassign them at a critical time.

The other half of the game, the action platform segments, can be brutal. The controls are rigid, and monsters come from all sides, often making it hard to turn around quickly to tackle various threats. Life begins at a premium, with very sparse health recovery and a magical spell that only charges one measly health point at a time. Much more problematic in the action scenes is the interplay between the foreground and background. Helios battles strictly in one area, but enemies often come from the font or background. 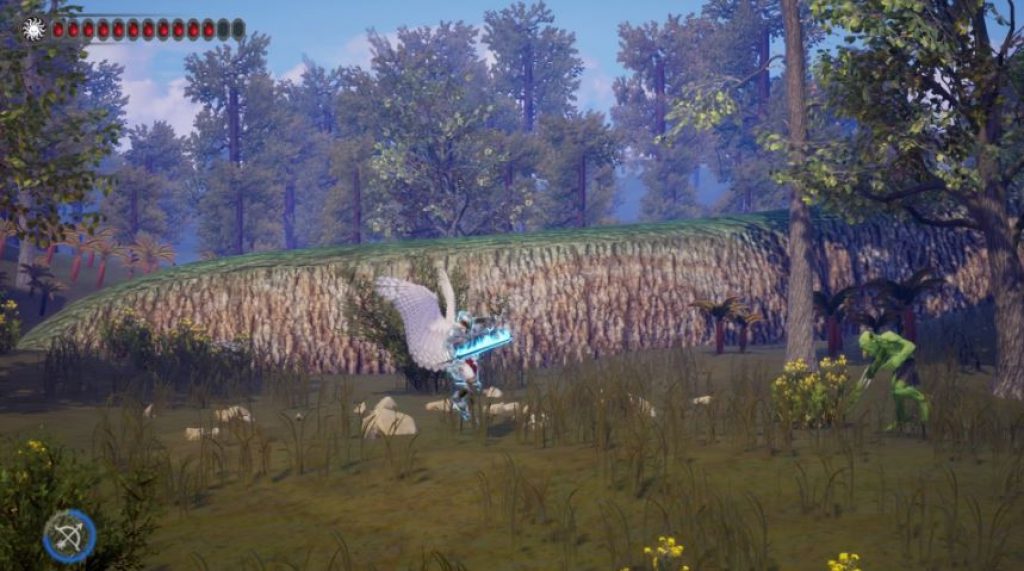 You can see them approaching, however, until they reach your plane, cutting with your sword won’t hit them. The transition between untouchable and vulnerable is not signaled, so it’s often best to hunt game for an approaching enemy until it takes damage – but since some fly diagonally at you, this isn’t foolproof. The interplay between these areas can be a good challenge if it’s just background characters firing projectiles you have to dodge. Still, the tendency of enemies to cross from one plane to another just creates more frustration than it’s worth.

The boss characters of the younger gods are the exception to this rule and where the combat shines. The old fashioned challenge is not hindered by the gimmick present in regular enemy encounters. Better yet, the collection of boss designs is mostly a creative mix of different cultural traditions from all over the world, and the strength and attack patterns of each connect to the disasters they have made for your people. Beating them gives you new strength, but having the personification of floods, droughts, or fires is almost as satisfying after seeing your culture struggle with them.

SolSeraph could have been a little closer to the conventions of his bright inspiration, and it might have been better for it. The changes in the sim aspect create gameplay at the expense of tonal depth, and the action segments can be annoyingly clunky, particularly with the addition of enemies that are untouchable until an undefined point in time. The willingness to riff on one of the most beloved classics of an entire console era shows a remarkable amount of audacity, and it works halfway through. It is half that makes SolSeraph, not such a qualified recommendation.

SolSeraph takes you in the divine boots of Helios, the Knight of the Dawn, as he helps build a civilization and fight against a series of younger gods, all manifesting themselves as the embodiment of a natural disaster.