Sony is not taking any risks with this one. The latest innovation of its flagship wireless noise-canceling headphone, the WH-1000xM4, has improved over its predecessor’s main complaint — call quality. It’s now crystal clear whether you’re indoors or out. Now that that’s settled, music lovers can enjoy everything these $349 headphones have to offer, including incredible audio quality, 30 hours of battery life, and a host of audio customization features that make the 1000xM4 one of the smartest headphones on the market. This is our Sony WH-1000XM4 Review.

Sony didn’t bother to modify the design of the 1000XM4 too much, and that’s fine because that black chassis with its tiny copper accents still looks excellent — particularly with the Sony logo stamped on both sides of the yolks. Except for the black, brushed aluminum extensions, most of the headphone frame is made of plastic, while the headband and ear cups are made of memory foam covered in black leather. The ear cups rotate to lie flat against your shoulders, making them more comfortable to wear around your neck. 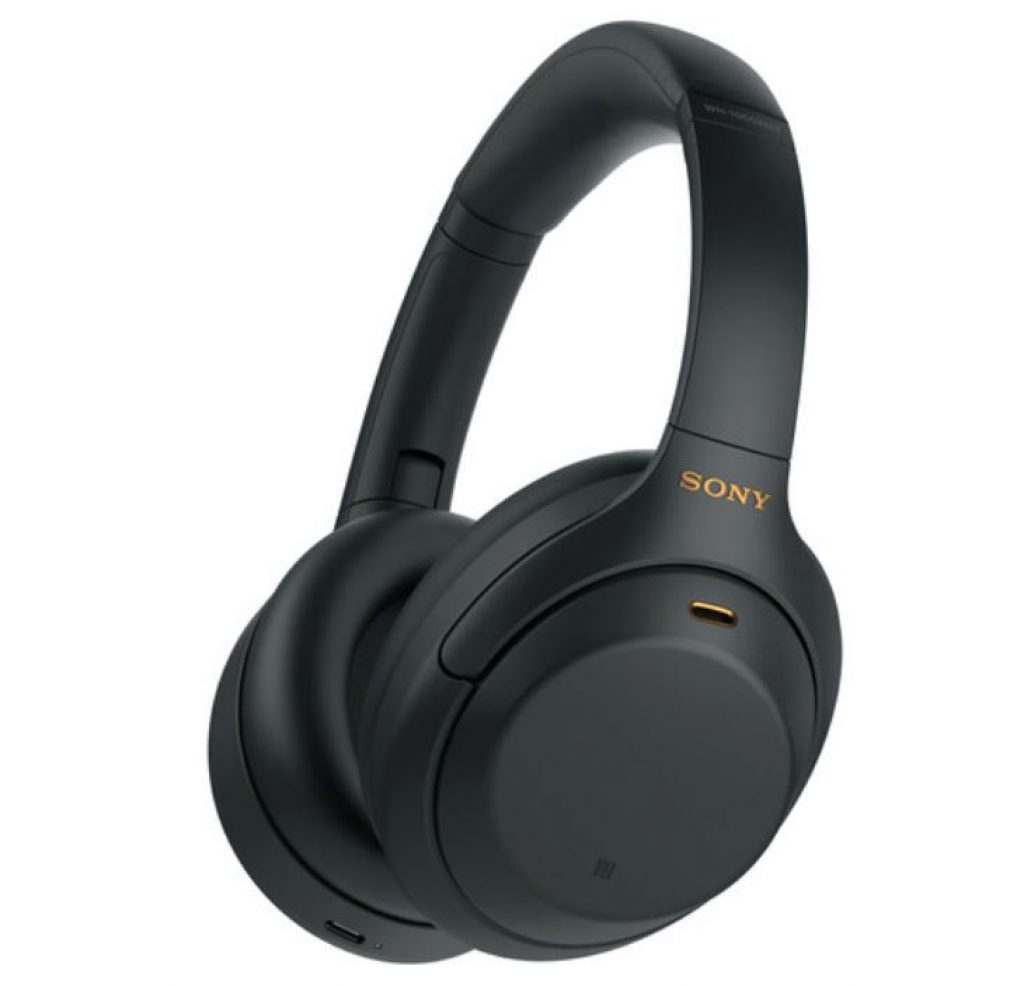 However, there are some small changes. For example, the ear cushions are 10% longer than their predecessors, while the headband is slightly slimmer. The WH-1000XM4 has an identical button and port placement to its predecessor, the 1000XM3. The USB Type-C charging port is located under the right earcup, while the Power and Custom buttons are located at the bottom of the left earcup with the audio jack in case you want to plug the headphones into a waiting laptop or smartphone.

The NFC chip is located inside the left ear cup while the motion sensor is on the inside. And just like the XM3, Sony’s latest cans are also available in Champagne Gold.

The 1000xM4 are super comfortable. Seriously, I’ve worn them for a whole 8-hour working day, and there was never an uncomfortable moment. The only time I noticed them was when I turned them on and off. The increased surface of the auricles pressed so gently against my head that it was a great way to relieve any unnecessary pressure. The large oval shape of the auricles fits all over my small ears, and it should be easy for people with larger ears. The xM4 weighs 8.9 ounces, which is slightly lighter than the 9-ounce Bose Noise Cancelling Headphones 700. However, when I had both pairs of cans in my hands, the Bose feels heavier.

Sony didn’t mess up a big thing, so it kept the same touch panels and gestures intact. The operating schedule remains easy to use: play/pause (single tap), skip track (swipe left), previous track (swipe right), volume up (swipe up), volume down (swipe down), answer/end call (double tap), and digital assistant (tap and hold). All you need to know is that every gesture works smoothly. 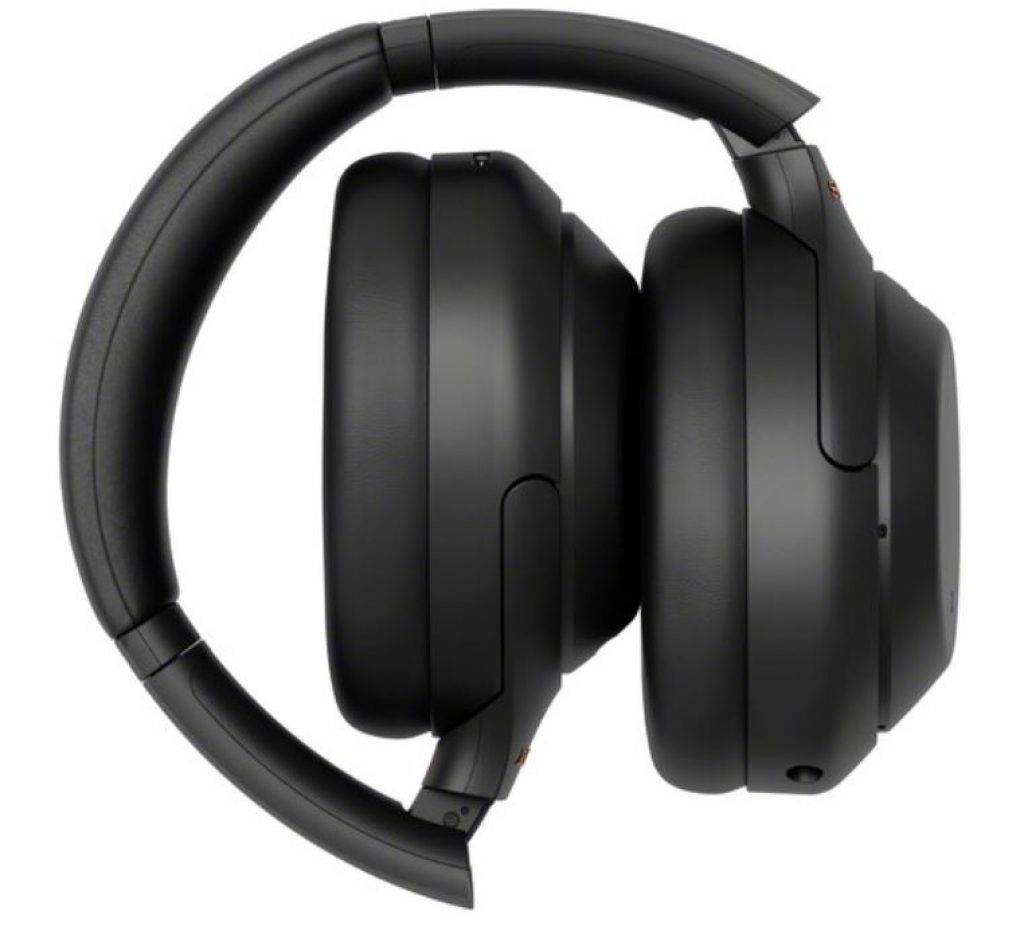 One small detail I’ve picked up is the ability to move forward quickly or play a song backward by performing the corresponding swipe gesture while leaving your finger on the touch screen. It’s a testament to how intuitive and the responsive touch control is to these looks.

WH-1000xM4’s smart controls don’t stop there. On-ear detection is available to pause or resume playback each time you remove or wear the headphones. The Quick Attention function does the same when you put your hand over the right ear cup, while the speak-to-chat function uses built-in microphones and advanced signal processing to recognize your voice and pause the music when you speak. All work incredibly well with very little latency.

Sony’s “Precise Voice Pickup” technology is instantly noticeable when the digital assistant is turned on. The combination of five microphones with advanced audio signal processing creates a clearer path for the WH-1000xM4 to recognize voice commands, which it does with ease. Speech recognition is flawless as the microphones pick up every syllable. Oral questions are registered quickly and answered even faster. It’s cool that Sony programmed the headphones with Amazon Alexa and Google Assistant integration; however, you can also use them with Siri.

Sony has spared no expense to improve its ANC technology. The WH-1000xM4 uses two feedforward microphones and the company’s proprietary Dual Noise Sensor technology that works with the HD Noise Canceling Processor QN1 chip to analyze and filter out ambient noise. The truth is that I hardly noticed any differences in noise cancellation between the WH-1000xM4 and WH-1000xM3, which was beautiful because the results are still remarkable. 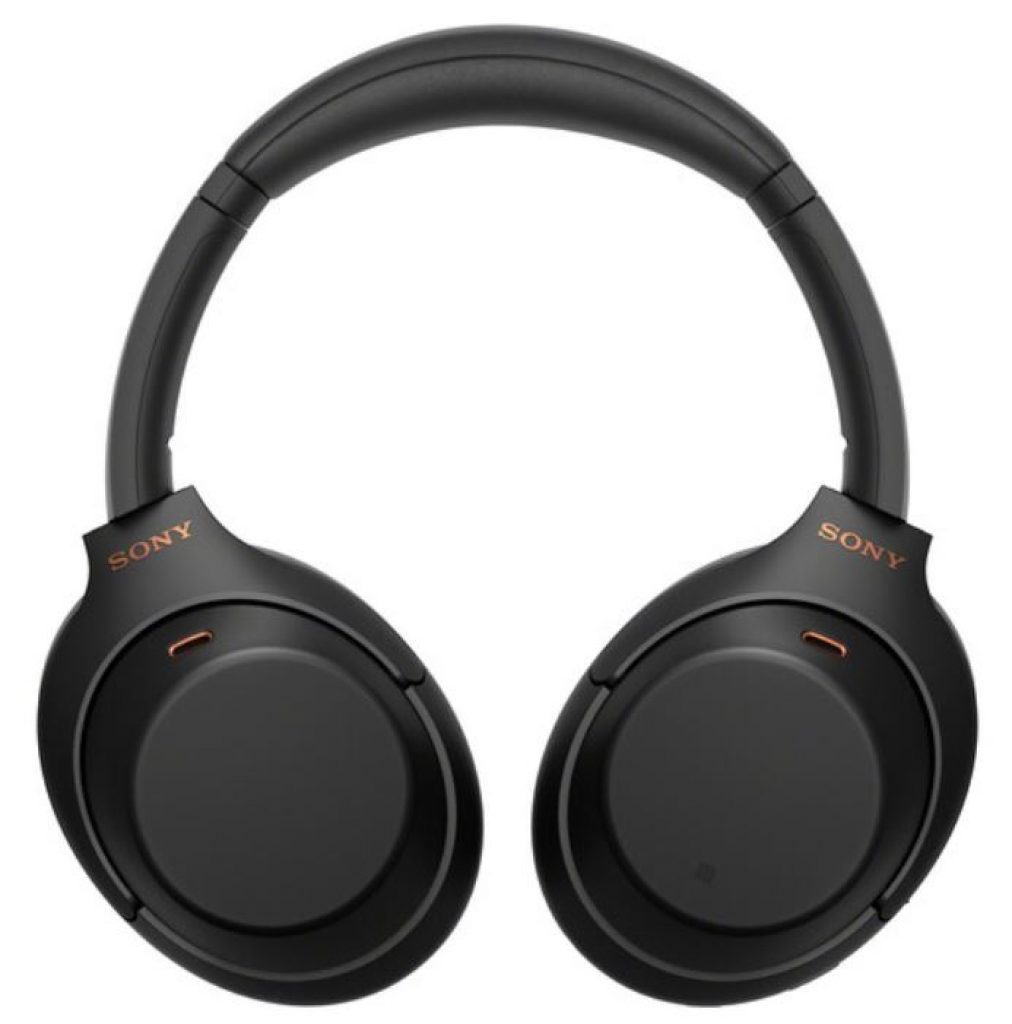 To maximize performance, Sony has included an NC Optimizer that measures your ears to create the best possible listening environment based on the size of your head. Additionally, there is an Atmospheric Pressure Optimization function that adjusts the pressure based on the altitude. However, it is best suited for when you are sitting in an airplane or lounging on a high mountain top in a ski area. Given the current pandemic, both scenarios are not practical at the moment for testing noise cancellation, so I improvised as best I could.

I found the ANC performance of the WH-1000xM4 to be just as effective as that of the Bose 700, although certain sounds are more noticeable on Sony headphones. At low volume, the WH-1000xM4 blocked out living room sounds such as cat mills and the NBA games playing in the background. The copier and fax machines running through my future mother-in-law’s office were muted throughout the day. Even when I sat outside on the porch, I couldn’t hear the sports cars passing by. The Bose 700 gave me the same silence.

The WH-1000xM4 does not have 10 levels of noise cancellation like the Bose 700 but has 20 levels of ambient noise to hear your surroundings more clearly without turning off the headphones. Considering that the function is still going through a refining phase, at least on the headphones, that’s quite an achievement. I’ve managed to identify most of the sounds around me, whether it’s the dishwasher’s timer or my brother shouting a favor from another room. Adjusting the levels will amplify the music, which was annoying when someone made a smoothie in a blender, but that shows how powerful the function is.

Okay, so Sony has all these bells and whistles, but what’s the sound like? In a word, fantastic. I started with Rihanna’s underwater instruments, “Needed Me,” with the equalizer turned off. The boss kiss-off song sounded ethereal and dark at the same time with the bass that seems to rise from underneath the soundscape, while the synthesized instrumentals still have room to float around Rihanna’s loud, assertive alto. And despite what should be an overwhelming bass, I can again clearly hear the drums. 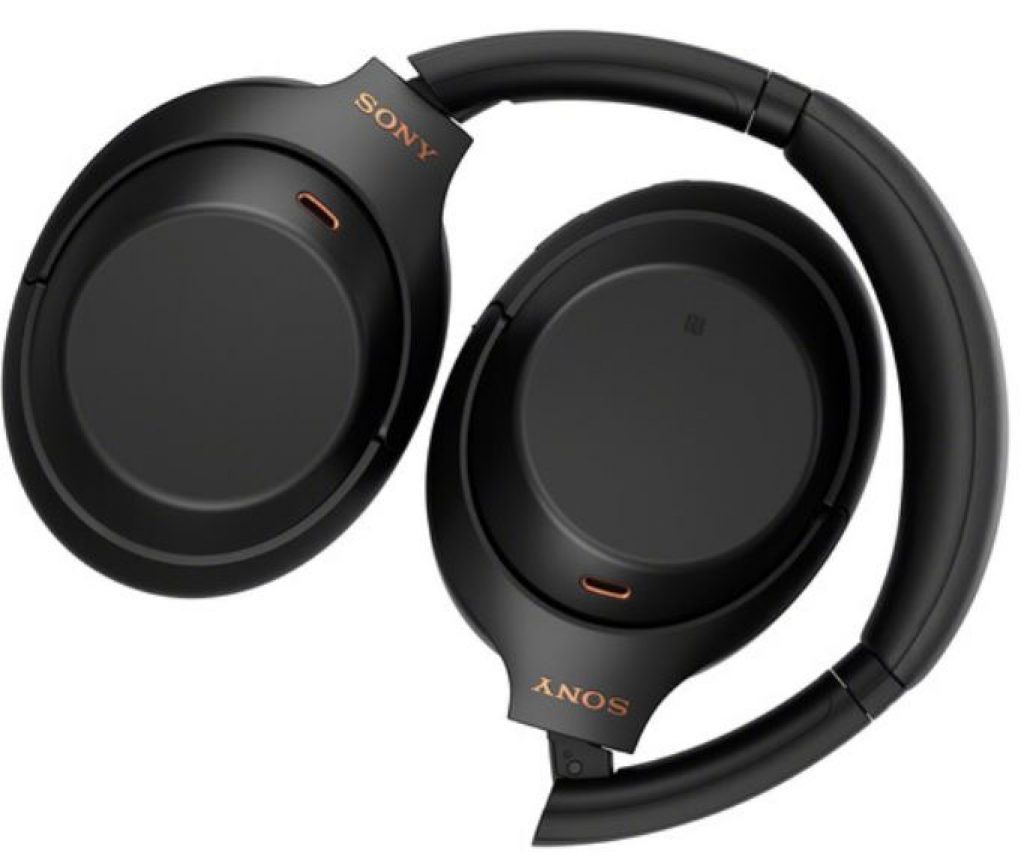 Listening to the same song on the Bose wasn’t that powerful. It’s not bad by any imagination. The headphones are even very accurate; I certainly heard the drums more clearly in the background. It should also be noted that what goes on for 50% volume on the 1000xM4 is about 70% on the Bose.

When I started playing “Sometimes I Wonder” by Darius Rucker and Jill Scott, I was immediately captivated by how full the keyboard sounded. Rucker’s vocals were rich as syrup, while Scott’s was light and airy, and when the violins started to swell, it was simply beautiful. Again, the track wasn’t very dynamic on the Bose, although I could hear more of the guitar drums and violins because of that lack of fullness.

For my last track, I listened to Derrick Hodge’s “Color Of Noize,” and the 1000xM4 presented a powerful organ, precise drums with lots of cymbals, and a synthesized keyboard. And while the keyboard and organ should have competed for space, there was never any distortion. On the Bose, the cymbals were a bit more precise, and I heard the soft ringing of a bottle in the background.

One of the biggest complaints about the 1000xM3 was the call quality. Sony heard you and made several improvements to the xM4. First of all, the headset has five microphones that work to block noise and amplify your voice. Driven by Sony’s Precise Voice Pickup technology, the microphones perform audio signal processing to deliver optimal sound quality during calls.

I have made several phone calls on the 1000xM4, and regardless of whether I was sitting in front of my TV or walking to the store, each of my callers said they could hear me. The audio was great on my side, and I listened to my niece clearly in the background when I called my brother to provide a little technical support. And when I walked to the fish market, my mother said she couldn’t hear the train racing by. And while I could listen to it on my side, it wasn’t enough to distract me from the conversation.

They’re still going. Although the 1000xM4 has worn 20 hours in 3 days, the headphones still have 30% of the battery life. That corresponds to Sony’s estimate of 30 hours with the ANC enabled. Turn off the ANC, and you get 38 hours of juice, which, with 3 hours of listening per day, should take almost two weeks. Both times are significantly longer than the Bose, which has an estimated battery life of 20 hours. 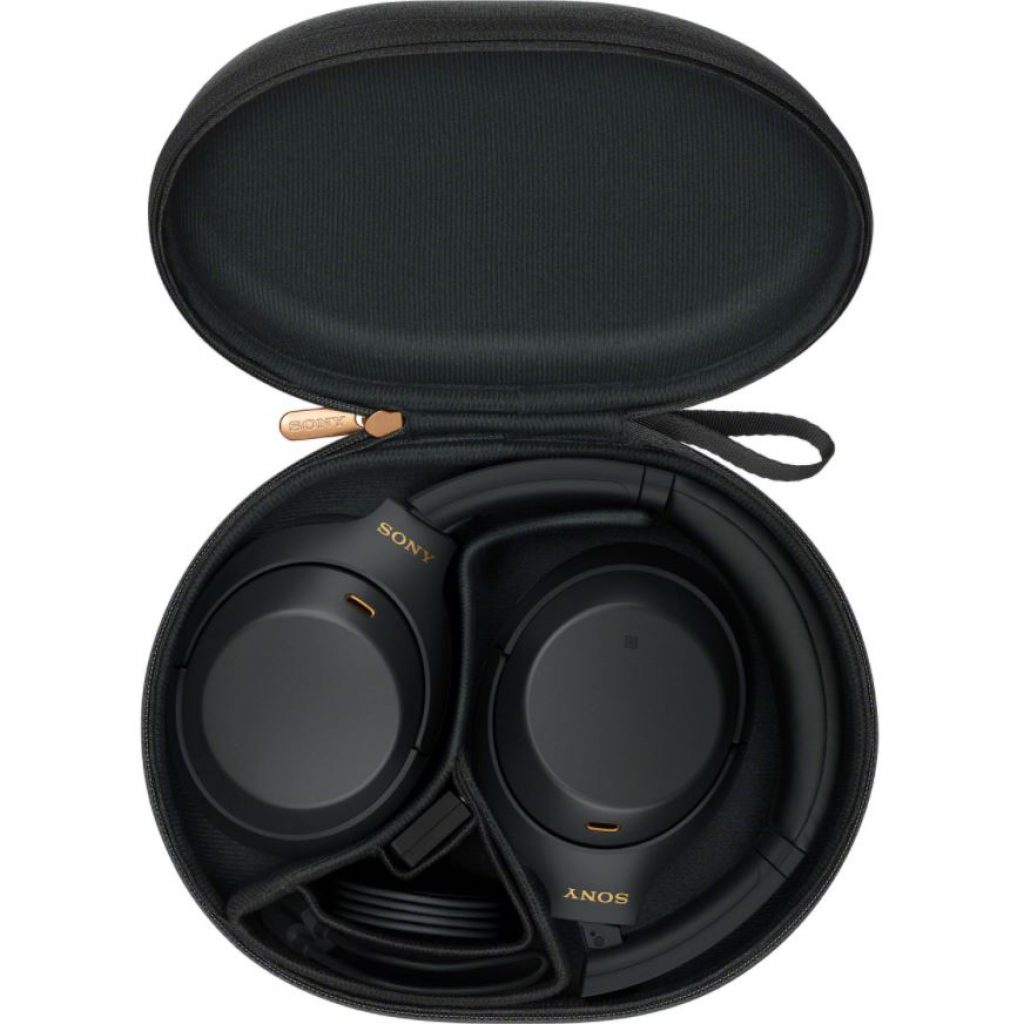 Eventually, you have to turn the 1000xM4 off to charge them via the USB-C port. It won’t take long because Sony says it only takes 10 minutes for the battery to last 5 hours. The 1000xM4 uses Bluetooth 5.0, which means it has a theoretical range of 800 feet. During my tests, I had no problem to leave my phone upstairs while I was working downstairs or when I went into the backyard. However, when I left my apartment building to stand on the street, it started sputtering a bit.

The Sony WH-1000xM4 delivers small but significant improvements in a familiar package and is a strong contender for the best noise-canceling headphones you can buy. It has taken two years for Sony to fix some of the flaws that bothered us in the previous version, but it was more than worth the wait. These headphones sound great, noise-canceling is on top of that at Bose, and the comprehensive feature set offers so much playability across several media formats and platforms.

Is there enough here to upgrade the Sony WH-1000xM3? If you want more complete headphones and have the money to spit them out, then yes. At the same time, the WH-1000xM3 are excellent headphones that, if available for less than $250, are a steal. The WH-1000xM4 is Sony’s best attempt to dethrone the Bose 700, although the Bose headphones are still better in certain areas – including call quality. However, Sony’s new cans are almost perfect and are among the best noise-canceling headphones you can buy now.

The Sony WH-1000XM4 sets the tone in every aspect to challenge the Bose 700 for the title of best noise-cancelling headphones.