Since its launch in 2007, Apple TV has been synonymous with digital media and entertainment. Millions of people use it to watch TV programs and movies, listen to music, play games, and much more. One of the best things about Apple TV is that you can take it anywhere and connect it to any TV to keep you entertained. And that’s where the best Apple TV VPN can help, so you can access all your favorite content, no matter where you are.

Many of the world’s leading VPN providers can be used for Apple TV, but given that there are so many, you’re probably wondering which one to choose. The best services are fast, easy to use, and provide access to a wide variety of content – and we’ve rounded up the best Apple TV VPNs for you on this page.

When it comes to choosing the best VPN for Apple TV, you want one that provides access to a large selection of high-speed servers – that means it must also be the task of 4K streaming. 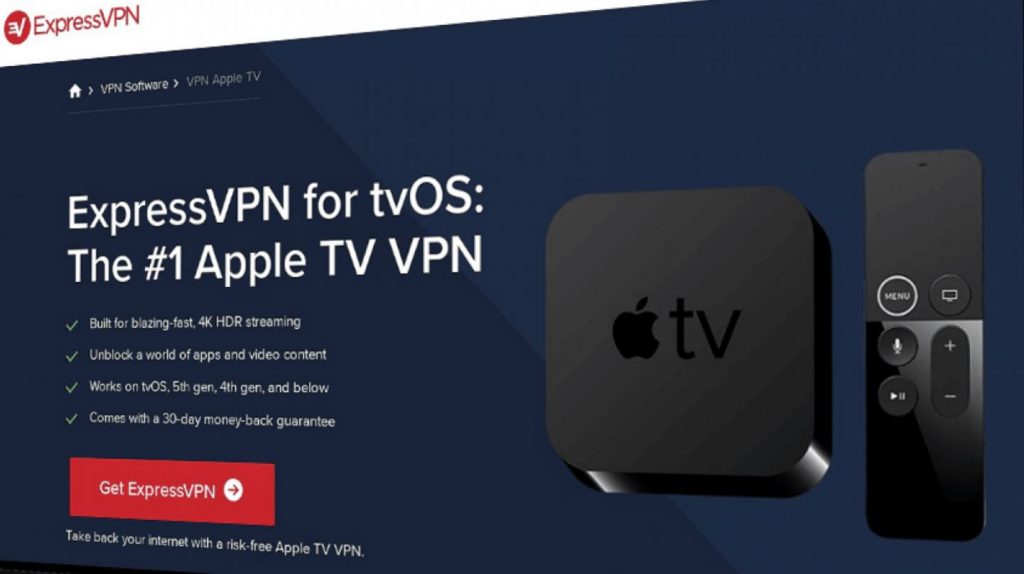 Based in the British Virgin Islands, ExpressVPN takes the crown as Apple TV’s best VPN and offers a range of impressive features that will enhance your streaming experience. One of the best things about ExpressVPN for Apple TV is that it’s developed with 4K HDR streaming in mind so that you can expect high speeds and excellent overall performance. It offers more than 3,000 servers in 94 countries.

There are two methods to use ExpressVPN on your Apple TV. You can use MediaStreamer or install the software on your Wi-Fi router. The latter allows you to take advantage of all the features of ExpressVPN and even bypass one of the few downsides of the service – the fact that it’s ‘only’ compatible with five devices at a time.

Surfshark is another popular VPN service that offers some great features and can be used with Apple TV. The great thing is that you can get it up and running in a few easy steps thanks to a feature called smart DNS. Once set up, you can access Netflix, Hulu, iPlayer, and a whole range of other streaming services through your Apple TV device. There are more than 1,700 servers to choose from in more than 60 countries worldwide, and to make it easier and faster; you can connect to the fastest available server.

If you want to do more than just access TV streaming services, you can install Surfshark on your router. It features some excellent security and privacy features, such as a kill switch, DNS leak protection, 256-bit encryption, a no-logs policy, and protection against malware, web trackers, and intrusive advertisements.

Compared to other VPN services, Surfshark stands out as the best Apple TV VPN because of the value it offers. For less than $2 per month, you can connect as many devices as you want. Should you encounter any problems, there is 24/7 support and a 30-day money-back guarantee. Read more in our Surfshark VPN review.

The VPN with the largest server network 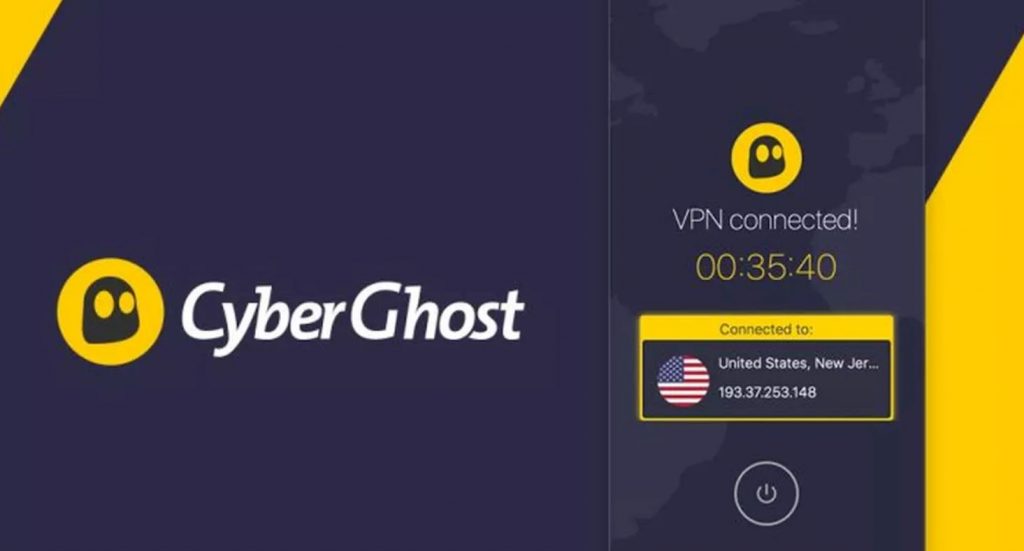 If you are looking for a top-quality Apple TV VPN service that gives you access to an insanely large number of servers, look no further than CyberGhost. This service is available for Apple TV and allows you to connect to more than 6,000 servers in 90 countries. Thanks to such an extensive network of servers, you will have no problem accessing geo-restricted content on Netflix, HBO Now, Amazon Prime, BBC iPlayer, Peacock, and other streaming services (no matter where in the world you are).

CyberGhost claims that its servers offer ‘the speed you need for the smoothest viewing experience,’ which is a prerequisite if you own an Apple TV, and helps to avoid buffering, bandwidth disruption, and network limitations. The best and fastest way to set it up is via DNS, but there is an app for routers.

Other features include AES 256-bit encryption, a built-in kill switch, DNS and IP leak protection, a choice of OpenVPN, IKEv2, and WireGuard protocols, and the ability to connect up to seven devices. There’s also 24/7 customer support and an impressive 45-day money-back guarantee. Check out more in our CyberGhost VPN Review.

A serious VPN with features aplenty 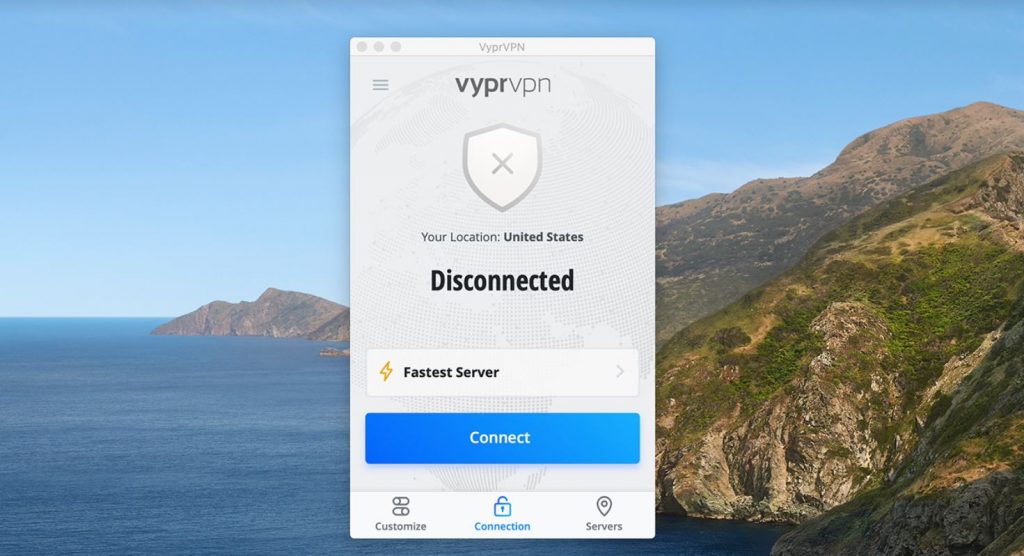 With more than two million customers worldwide, VyprVPN is easily described as one of the world’s most popular virtual private networks and the best Apple TV VPN right now. And if you’re an Apple TV user, you’re in luck because this service is compatible. You get an extensive server network consisting of 70 countries and more than 200,000 ISP addresses worldwide. Like any premium VPN service, Vyper allows users to protect their privacy, shut down censorship, and bypass geo-restrictions.

It provides access to Netflix, Amazon Prime, BBC iPlayer, and many other platforms. We love that VyperVPN offers different ways to connect your Apple TV, such as via a router application, by connecting via your Mac’s Wi-Fi connection, or using a DD-WRT/Tomato router.

There are fast streaming, high-end encryption, IP address protection, an audited no-logs policy, a kill switch, and 24/7 customer support in terms of available features. One drawback is that you can only connect five devices to a single subscription, but as usual, VyprVPN offers a 30-day money-back guarantee if you are not satisfied. Read more in our VyprVPN review.

NordVPN regularly appears in our round-ups of the top VPNs for various functions (as well as sky-high in our overall best VPN list), and things are no different when it comes to the best Apple TV VPN. You get a best-in-class provider that’s easy to use and offers excellent overall performance. With NordVPN, you can unblock Netflix, Hulu, Amazon Prime, BBC iPlayer, and many other streaming services. Access to international content libraries is no problem, thanks to a network of more than 5,000 servers in 59 countries.

One of our favorite features is Double VPN, which encrypts your Internet traffic over two servers, and you don’t have to worry about privacy. But what somewhat stands in NordVPN’s way is that it is more challenging to use on Apple TV, so users have to install software on their router. Although NordVPN offers a how-to manual and 24/7 support, this is a tedious process that should help you set up without too many problems. Read more in our NordVPN Review.

Best Graphic Novels Of All Time

The Best Antivirus android of 2021

The Best HTML5 Books For Beginners

7 Benefits Of Using SEO Services of 2021

The Best Programming Books Of All Time