Best VPN for Netflix: In the past, the best VPN services were no longer regarded exclusively as privacy software. Enter the Netflix VPN – a supercharged service that can not only protect your sensitive data and identity online but also unblock the world’s content at the touch of a button. Essentially, Netflix limits what it shows to people in certain regions thanks to licensing and distribution agreements, but many paying customers think they have the right to view everything Netflix has in stock.

However, Netflix doesn’t just take over, and if it detects VPN usage, it will block your connection. That’s why grabbing the best VPN for Netflix is the best way to work – not only will you get access to Netflix, but you will also be able to switch locations and watch the best shows that are not available where you are, whether you are on vacation, or just watching them from your living room.

ExpressVPN has ticked all the boxes and has never let us down when accessing Netflix from any location – and it also has plenty of additional features suitable for more experienced users. However, there’s much more to choose from, so below, we’ve looked at the best VPN for Netflix. All you have to do is choose which one suits you best.

The best Netflix VPN on the market

ExpressVPN is the best Netflix VPN on the market, thanks to its excellent speeds, excellent 24/7 customer service, and broad compatibility between devices. Express gives users access to a wide range of Netflix libraries, including the US, UK, Canada, and more, and Smart TV support means you can explore the world’s Netflix from the comfort of your couch.

The convenient feature that makes this possible is ExpressVPN’s MediaStreamer DNS, which unlocks Netflix on devices that don’t support VPNs – including Apple TV and consoles. That means you don’t just have to rely on your mobile or laptop – you can get international Netflix goodness wherever you want. Express also has a huge network of over 3,000 servers in 94 countries, which means you have a wide range of options for choosing a location.

If you have any problems, Express’s customer service team is ready to help you 24 hours a day, seven days a week, and our experience is that the operators are happy to help you and are very knowledgeable. They can also tell you which server is best for which regional Netflix library you want to explore.

There is a limit of up to five devices using the service at one time, which is less than some competitors. However, this should be more than enough for most people’s needs, as many Netflix plans limit the number of shared accounts used at one time. If you’re looking for the most rounded, fully-featured VPN for Netflix and more, look no further than ExpressVPN. Read more in our ExpressVPN Review. 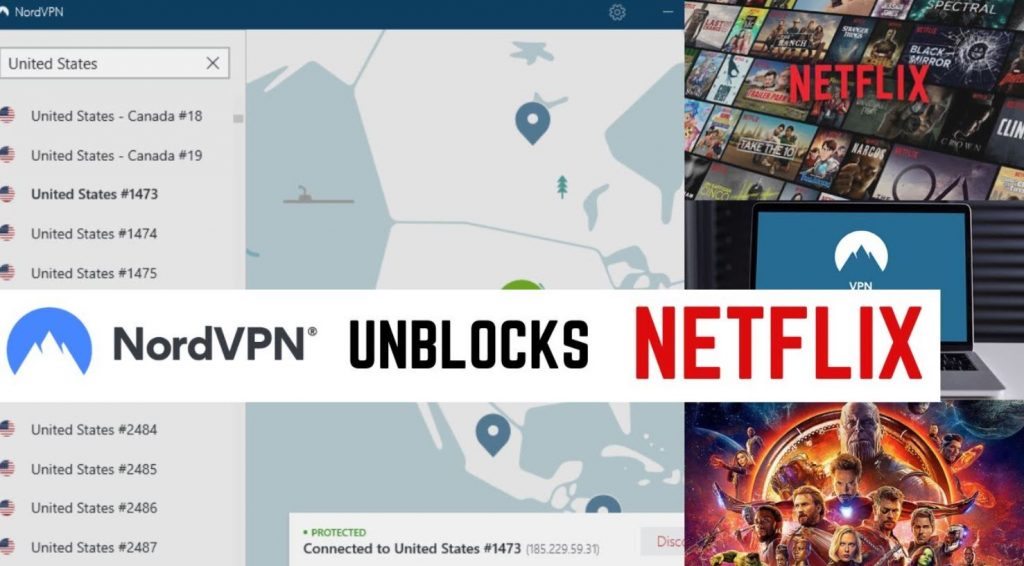 NordVPN is perhaps the best-known VPN on the market and has achieved this by prioritizing security and speed:

All this equates to a service that Netflix can unblock with little effort.

While some VPNs can unblock a few locations, but struggle with others, in our test NordVPN’s Netflix unblocking was excellent, and it was able to access every server we tried. However, if you have problems, the 24/7 live chat will be able to help you in minutes – and custom support pages are describing how to access certain popular shows.

If you’re using a mobile device, the interface can be a bit tricky, but that’s a small problem with an excellent VPN with fully-featured apps for virtually any device you have – and having six simultaneous connections is also convenient. If you’re looking for the best VPN for Netflix that focuses on security without sacrificing functionality or speed, NordVPN may be right for you, and if it doesn’t, you’ll have a 30-day money-back guarantee to protect you. Read more in our NordVPN Review. 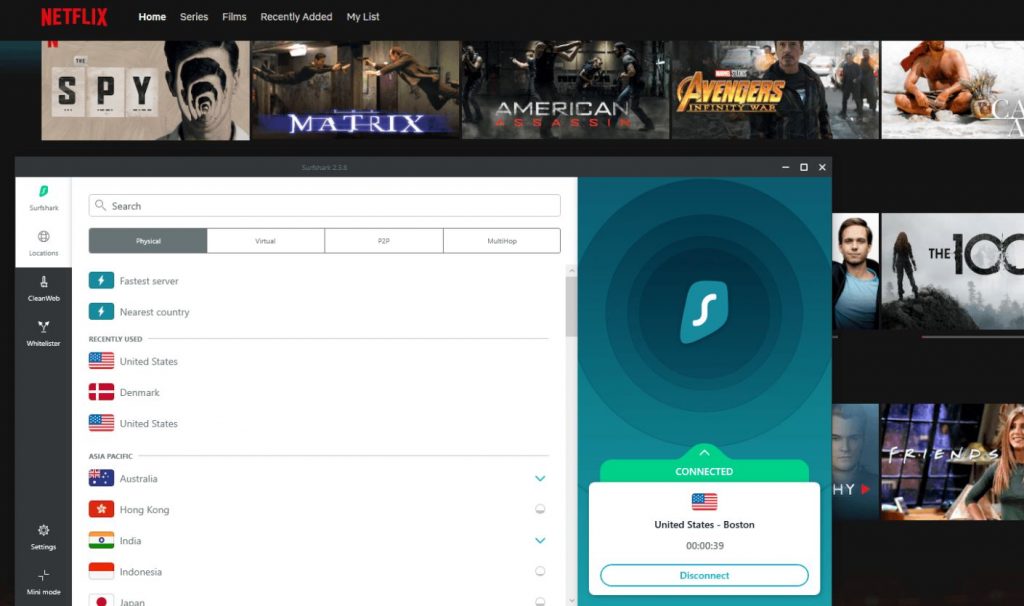 Surfshark is very bold with its Netflix unblocking claims, stating that it can give access to 14 different libraries worldwide – and in our tests, it has delivered. A good thing about this bold claim is that the company is selling itself on its capabilities as a Netflix VPN, so it’s much more obligated to maintain its performance even as Netflix tightens its restrictions on VPN usage.

The other big thing about Surfshark is its price – at about $2.50 a month, it’s one of the best low-cost VPN services, but it performs as a premium product and has our guide to the best fast VPN. It also sports very fetching apps that are easy to use and fun to watch to get started. However, they don’t have the most extensive list of features, so it can be restrictive if you start digging into the settings.

Just like unblocking Netflix, Surfshark can get those outside the UK into BBC iPlayer, as well as unblocking YouTube, Hulu, and Amazon Prime. Access to Prime is also an improvement because while it wasn’t reliable in our last round of testing, there were no problems at all this time. Like Netflix VPN, though, there’s very little due to Surfshark, especially for only $2.49 a month. If you’re looking for a cheap and easy way to get stuck in Netflix content overseas, this can be the best VPN for Netflix for you. Check more in our Surfshark VPN review. 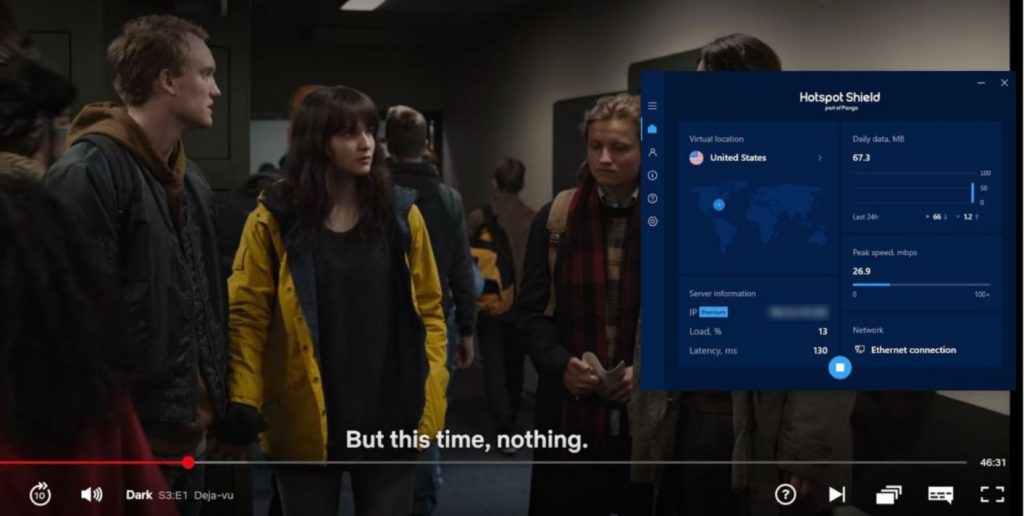 Hotspot Shield is the go-to provider if you want a fast VPN, and if you’re going to stream Netflix in HD without having to buffer a moment, it is a desirable choice. With access to Netflix libraries worldwide – and other services such as Amazon Prime, Disney+, and the always annoying BBC iPlayer – it’s a great all-round streaming VPN. Plus, with intuitive and straightforward apps, it’s a breeze to connect and watch.

However, if you’re looking for a VPN with a lot of configuration, the Hotspot Shield is a bit missing. The patented Catapult Hydra protocol is the secret behind the immense speeds, but it also limits the use outside the bundled apps. Realistically, this will not affect many people, but if you prefer to set up your VPN server, you will have to find another service that supports OpenVPN.

However, if you are a Netflix addict who wants full access at maximum speed, Hotspot Shield offers a simple yet powerful solution for your needs and is the best VPN for Netflix. Read more in our Hotspot Shield VPN review. 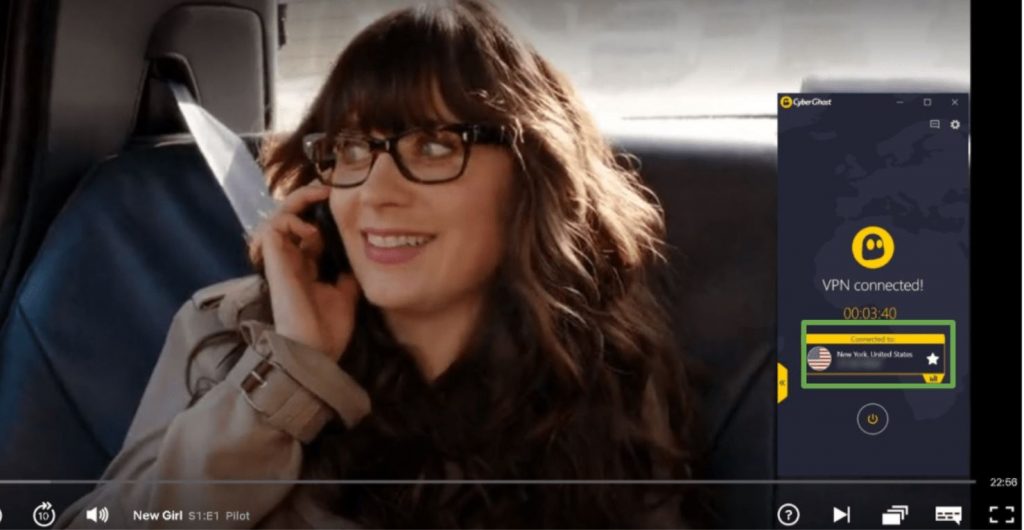 CyberGhost has set itself the goal of making the Netflix VPN of its choice, with powerful, dedicated streaming and torrent functionality. With attractive customers and a tempting price tag, it’s no wonder it has more than 10 million customers. Of course, CyberGhost unblocks Netflix with ease, but you can also filter the best servers for whatever streaming platform you want to use within the apps. That kind of feature makes it super easy to get started.

However, although it does a great job unblocking Netflix, CyberGhost isn’t at the top of this list because, as a package, it is a bit rough around the edges, and the connection speeds aren’t big enough to make up for that. The apps aren’t as intuitive as others, but we would like every VPN to take a leaf out of CyberGhost’s book regarding the fantastic special streaming filters.

CyberGhost’s generous 45-day money-back guarantee is a great way to test the service without risk and landed it a place on our best VPN free trials buy guide. CyberGhost is a desirable proposition for the price and is perfectly suited to be the best VPN for Netflix. Read more in our CyberGhost VPN Review.

Best Drones In The World

Best Cameras For Beginners Under $100