Compsmag is supported by its audience. When you buy through links on our website, we may earn an affiliate commission fee. Learn more
Reviews » Aftershokz Aeropex Review
Reviews

Aftershokz has been in the running headphone game for a couple of years, and in those days, it had one goal; to build an open earphone that allows you to run, cycle, and exercise, all without completely blocking the world around you. It’s all ingrained in bone conduction technology that’s built into an over-the-neck design to do that. With its latest, the Aeropex, it’s succeeded in wrapping that technology into something slimmer and more durable, while at the same time adding new bone conduction technology to improve sound quality. This is our Aftershokz Aeropex Review. 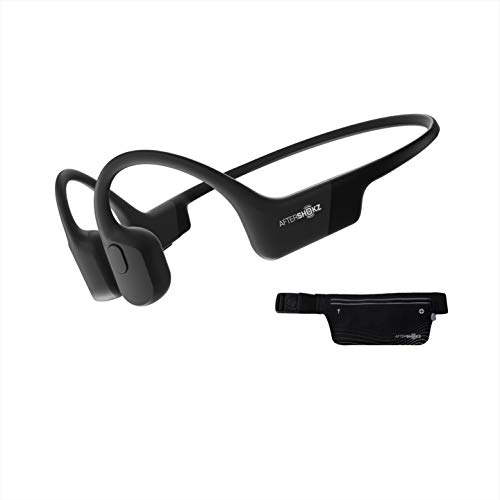 The y’re more expensive than the Trekz Air headphones, launched of 2021. For runners, in particular, Aftershokz has quickly become the go-to option, as more races are banning the use of closed and in-ear headphones due to safety considerations. With very little competition in that sporty open ear headphone space, the Aeropex seems to have cemented the place of the Aftershokz once again as the number one choice for fitness enthusiasts.

With each new iteration, Aftershokz has managed to shave a significant amount of weight off the frame and vital parts of his headphones, making them lighter to wear and less noticeable when you’re on the move. Put the Aeropex next to the Trekz Air, and you can see how much slimmer it has become here. Aftershokz says they’re 30% compact and 13% lighter, and while those sound like numbers, the difference is apparent as soon as you pick them up.

The se are considerably lighter than the previous generation. It’s still the same neckband style look, but it’s significantly reduced the size of the arms just in front of your ears. The frame is also skinny. Durability has been increased from an IP55 water resistance rating to an IP67 value. That means you get something equipped to be immersed in water for 30 minutes to a depth of one meter. In reality, that rating is about repelling the sweat and increasing the chance of a run in the rain and maybe dropping them in a puddle on the way instead of taking them for a swim.

Bluetooth and water don’t mix anyway, so the re’s no reason to wear them in the pool. We did manage to use them in the storm and get them sweaty for some indoor cycling and rowing sessions, and we are happy to report that they survived to live another day. The lean, twisty frame did make us doubt their durability. The robustness of the Aftershokz headphones in the long-run has always been questioned, and we’ve taken a break in the past as well.

Fortunately, that hasn’t been the case with the Aeropex, and there have been no worrying signs of wear and tear. For peace of mind, we suggest to put them in their suitcase instead of just throwing them in your sports bag to make sure they do take the distance. As far as on-board controls are concerned, there are two grippy physical buttons tucked away at the bottom of one of the sides of the frame next to the charging port. The y are mainly used to turn on the headphones and adjust the volume.

While turning those knobs still feel a little too close together, so turning them up and down quickly can take a few tries. More could be done to distinguish between the two. The charging port has changed from the covered USB port we got in the air to something now owned. While that means you now have to keep your charging cable (there are two in the box), the move has allowed Aftershokz to provide that increased waterproofing to give the Aeropex that durability boost.

As we said, bone conduction tech remains at the heart of the way Aftershokz delivers audio in a way that doesn’t completely distract you from the world around you. The way bone conduction technology works haven’t changed for the Aeropex, which uses transducers to guide through the vibrations in your cheekbones and to your ears to deliver sound without having anything directly in your ears. What has changed is what Aftershokz calls ‘PremiumPitch 2.0’.

This time it uses the transducers to channel the vibrations that are at an angle to better sit on the cheekbone, which promises to deliver the sound that has more bass, less vibration, and less noise leakage. In the first generation of the Aftershokz, these things were very prominent. You didn’t get much power, they vibrated at higher volumes, and they also leaked out quite a bit. On the Aeropex, progress was certainly made on some points, but not on all aspects.

You don’t get the kind of results you would expect from in-ear or over-ear headphones, but there are some improvements with the very soft bass boost, improved details, and an overall upgrade in sound quality. The se improvements are more prominent at moderate volume. Go out in the gym or for a run with them, and those improvements excel. Unlike the previous models, there is a better balance between letting you hear the real world and playing music or podcasts with a more satisfying sound.

The re is undeniably enough room to do better when that bone conduction technique improves, both in bass and clarity. Still, the differences between the Trekz Air and the Aeropex are noticeable. Interestingly, earplugs are also included, which you can use to enhance the sound quality. It’s identical to what Aftershokz does with its waterproof headphones, and it indeed has the desired effect to be a bit more worthwhile. You just have to be willing to close your ears, which counteracts the purpose of an open earphone quite well.

If you like to interrupt your workouts when a call comes through on your phone, there are dual, noise-canceling microphones to record your voice. You should have no issues taking those calls, although you don’t expect exceptional levels of clarity here. You’ll still get a bit of that vibration sensation at higher volumes, although it’s a little twisted in, and it never feels uncomfortable or up to a level you’d like to stop using it. The y also seem to leak much less at more moderate volumes, although it will still be the case if you crank things up to the limit.

The re is the promise of improved battery life here with the Aftershokz Aeropex. You now get eight hours of music playback and talk time, that’s two hours more than the Airs. It also only takes an hour and a half compared to two hours to fully charge. You now also get an hour of music playback from a fast 15-minute charge. When you turn on the headphones for the first time and tap the buttons, you’ll get a status update on battery life so you know when it might be time to put a spell on the charger.

If you’re at the gym one hour a day or running about the same length of time, that’s enough battery life to play with all week, and that’s pretty much what we’ve found. Aftershokz’s headphones have been slightly short on battery life in the past, but they seem to be a lot better and more reliable on the Aeropex. That quick charge option is also an excellent addition if you, like us, keep forgetting to charge them when they are depleted.

The AfterShokz Aeropex are now available directly through the company’s website and a large number of online retailers, including Amazon. The y are priced at $159.95, making them the most expensive option to go for in the Aftershokz family. As said, that’s $50 more than the Trekz Air and $20 more than the Aftershokz Xtrainerz, which is a waterproof headset that offers a built-in music player, but no Bluetooth streaming.

If you are looking for headphones that are ready to sweat and you don’t want to drown the world out, the Aftershokz Aeropex is your best option right now. From design, significant steps have been taken from the air and those first-generation Aftershokz headphones. The y feel more comfortable to wear, and the shrinkage in size does make a difference from a comfort point of view. When it comes to sound quality, the Aeropex doesn’t go any further than its predecessors, although they do show some subtle improvements, especially in terms of clarity and bass.

At the moment, Aftershokz owns this space because there is nothing to give it some competition. Hopefully, that will change in the future because there is undoubtedly an opportunity for others to stimulate the bone conduction technique even further. That’s it for our Aftershokz Aeropex Review.

The Aftershokz Aeropex are The Best none-conducting sports headphones you can buy now. The y are more expensive than the previous models and deliver a striking, albeit slight increase in sound quality.