Compsmag is supported by its audience. When you buy through links on our website, we may earn an affiliate commission fee. Learn more
Reviews » Dauntless Review
Reviews

Dauntless is everything from the lavish use of color to the larger-than-life Behemoths with cheeky nods to the developer’s Canadian roots. Monster Hunter: The world’s realistic design feels almost grim compared to the Shattered Isles’ Crayola color scheme with glamor and designs on the nose. The game has impudence but misses that little bit more to keep you busy with its monster hunt races. This is our Dauntless Review.

At first glance, Dauntless looks and seems to play as a beginner-friendly version of Capcom’s monster-murder franchise. After a robust character maker (which includes some fun non-gender-compliant options), you’ll be pushed into a dangerous world through an unobtrusive plane crash. The reason behind your existence here is a simple one that is not mentioned anymore: you have to kill things that make the place dangerous, and killing these huge things sometimes means asking your friends for help.

Hunt, kill, repeat. Chasing the giant monsters that sneak up on the Shattered Islands, killing them, and repeating them until you’ve collected enough parts to make a cape from tail feathers is something you’ll repeat endlessly. The game’s Behemoths are deadly, intelligent and initially occupy a strange space between fantastic and forest creatures. You find yourself taking up arms against murderous beavers, oversized owls, and angry turtles. 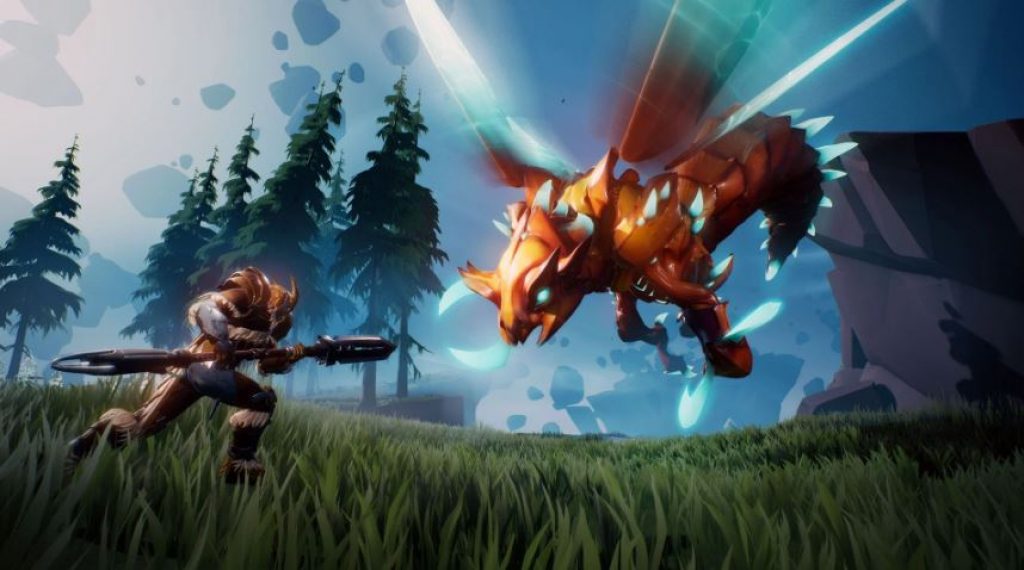 The beaver feels like a nod to the developer’s Canadian origins. Since the early reference points are mostly animals we know (as opposed to more esoteric dinosaur dragon hybrids), it means there’s a level of innate predictability in how some of these creatures are fighting. The Gnasher, our beaver-shaped friend, hits you with his oversized tail. The Shrike, a giant murder owl, flies around and uses his wings to create tornadoes.

The Embermane, an analog for a lion, prances and jumps like the best in the Serengeti. The fact that these monsters have physique and species archetypes naturally occurring in our world makes them less, well, daunting. Behemoth designs get more complicated once you leave the relative safety of the first few locations and deal with insects that shoot deadly lasers at you. Still, in general, you are fighting creatures for which you can use an intuitive solution.

This means that at first glance, the beasts have the same feeling that they are used to facing prehistoric nightmares in other games, compounded by the cartoon-like art direction and the game’s approach to hunting. Dauntless gives you access to several weapons that all have a significant impact on the hunting experience. From dual-swinging weapons to chainring teleporting, there’s an excellent variety to suit a variety of styles. Bladed weapons are better for cutting sample parts while crushing other skulls more effectively. Whatever you choose, you can bring something valuable to a group situation.

That said, once you’ve found the basics of knocking off pieces of Behemoths with a mix of massive attacks, light attacks, and special abilities, that’s all you need to worry about in the heat of the moment. The only concern with any hunt is the sleeping monster you’re trying to eat – you don’t have to worry about procrastination, making up traps, or anything else related to the idea of ​​tracking your prey. 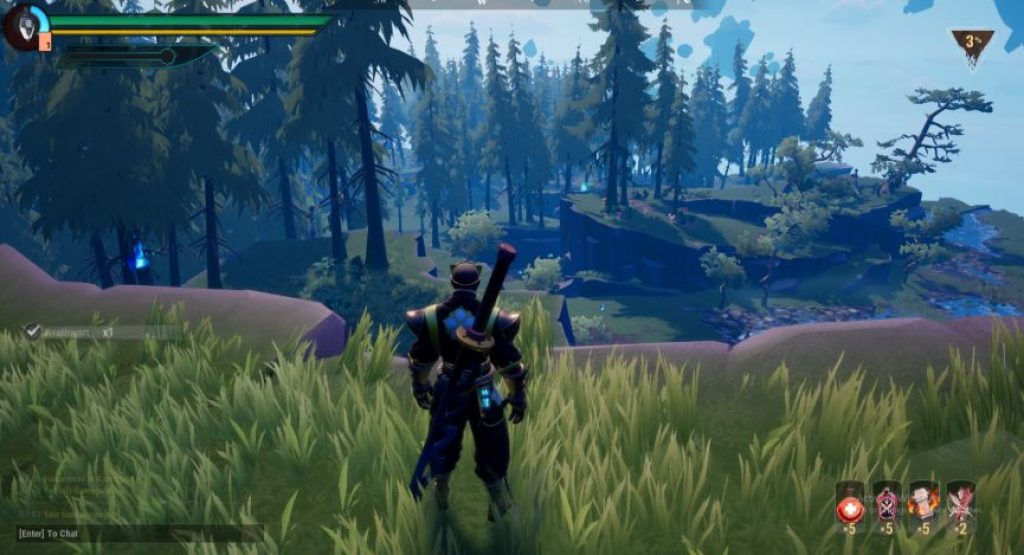 Dauntless does not in any way drink from the source of realism, but the lack of these touches ultimately makes it difficult to stay involved with the moment. This is not to say that the battles themselves do not have the difficulty required to raise your heart rate; a total swipe is more common when you start throwing yourself at bigger and worse critters. That said, the lack of verticality and overall terrain variation means there’s just not much to parse.

The same feeling of just a little shortcoming is also present when it comes to the fifteen hours of the core story. Monster Hunter: World worked on an engaging, overarching single-player tale to take you from each unique in-game location to another in your mission to push a dying continental lizard out to sea. Conversely, Dauntless gives you an almost administrative motivation for your actions. You have to clean things in the upper world because it keeps people safe.

Also, I hope you have time to collect fifteen stems of a plant in between while you try to knock off the skull of a giant monster because a giver at home is scientifically curious. There isn’t an attempt to get you invested mainly in the primary campaign, which means if you’re someone who prefers to take down ice-spitting owls solo, your only real motivation will be the satisfaction of putting yourself on that ice to throw-spitting owlbear. Playing alone can make you feel isolated.

This is most notable in the game’s hub world, Ramsgate. Even when the servers are busy (we’re talking matchmaking queues that are 100,000 players deep), there’s an evident lack of reflection of that in Ramsgate. The place feels empty, with maybe only a handful of people walking around. The NPCs feel in the same vein as a missed opportunity. While you’ll no doubt be happy to stroke the dog (and hopefully the rams) and have the local blacksmith serve up high-fashion lumberjack looks for days, the aesthetic appeal ends where it ends.

No roving salespeople, no murmur of chit chat when it gets busy. There are sections of open passageways and paths to sprint down, but generally, the city exists for you to pick up collectibles and quests. Anyone you can talk to looks like they are hiding a cool backstory, but you will never experience it. 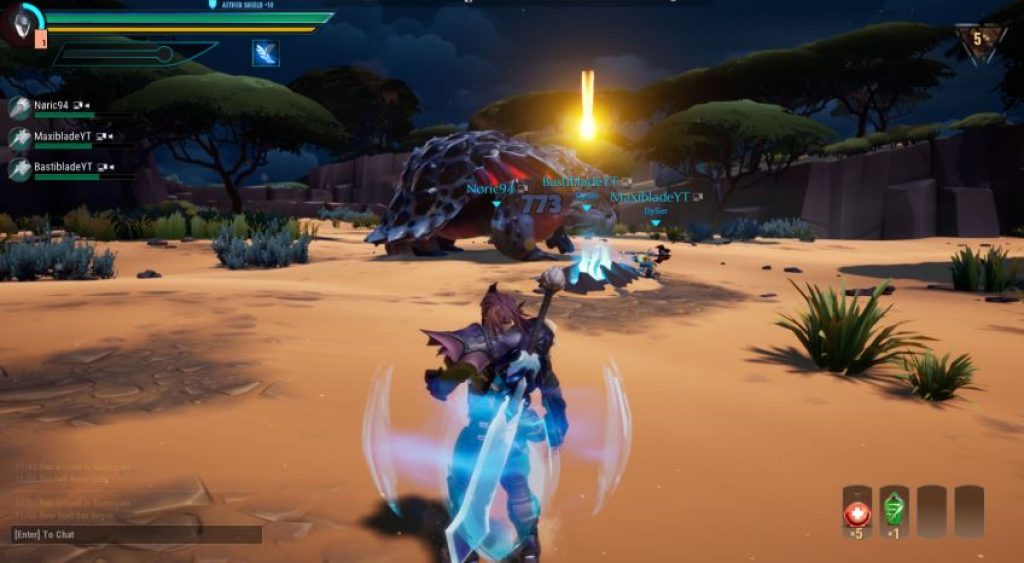 The multiplayer mode is where Dauntless shines, and the reality is that the game feels optimized for it. Cross-platform compatibility is available since launch day, which means that whether you beat Behemoths on PC, PlayStation 4, or Xbox One, your multiplayer pool will include all three. This is advantageous because matchmaking is refreshingly seamless in practice. There’s no need to fiddle with a menu or five, and it’s nice that the native friends’ lists from each platform are imported into the client. Matchmaking usually takes a matter of seconds, making Dauntless feel very plug and play in the best way.

However, the game is not without quirks – opening a menu while you complete a hunt can lock you in there and not come out. Hunting with a group of friends and getting stuck on the loading screen until you log again will kick you off the party and the effort. You could also fall into some of the landscape near Ramsgate and not free yourself without restarting the client. Something as simple as making the keyboard shortcut to work with things work over and over is not yet a foolproof feature, which can lead to repeated frustrations at inconvenient times.

Dauntless is also free to play the game. It’s impressive in terms of what it offers in terms of content, accessibility, and the fact that you’re not continually being tormented with the need to spend real money on something. There are dyes, cute emotes, and other cosmetic enhancements that are part of F2P, as well as a “Hunt Pass” that rewards players for completing in-game objectives. There is no way to buy your way to victory against the Behemoths, and the relatively unobtrusive presence of the F2P elements like the various in-game stores means that you can spend absolutely nothing and don’t feel like you are missing out on anything all unless you are a devil to enchant your things.

Overall, Dauntless review is an experience optimized to allow the most stress-free multiplayer session possible. From the seamless cross-play to the way anyone can jump into a game and confidently battle formidable enemies, it’s refreshingly accessible and great to boot. While it may feel a little empty, and some bugs spoil the experience here and there, the fresh look and vibrant spark are more than enticing enough to warrant a twist.

Dauntless is everything from the lavish use of color to the larger-than-life Behemoths with cheeky nods to the developer’s Canadian roots.