Compsmag is supported by its audience. When you buy through links on our website, we may earn an affiliate commission fee. Learn more
Reviews » Dell Precision 7540 Review
Reviews

Incredible, that’s what I think every time I sit in front of the Dell Precision 7540, the latest in the company’s line of semi-portable, high-spec mobile workstations. The Precision 7540 doesn’t beat around the bush. It offers intense computing power in a simple, clean package. The machine is for serious business, which means it costs serious money. However, an Intel Xeon CPU, Nvidia Quadro RTX 5000, and a best-in-class 4K HDR display – some of the laptop’s best features – are worth it. This is our Dell Precision 7540 Review. 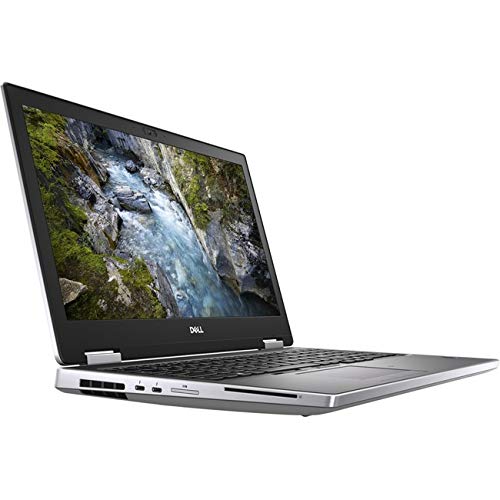 The Precision 7540 Workstation is a particularly good option if you have serious work to do, such as hacking data sets, encoding video, or drawing reports from across the Internet.

The aesthetic of the Precision 7540 is, like almost all Dell PCs. That is, it’s standard, reliable but predictable. The aluminum case with the Dell logo and the dark gray top case is precisely what you’d expect from a laptop designed for the job. Inside the clamshell chassis, you’ll find a full-size LED-backlit keyboard and Dell’s standard offset touchpad. This rating unit doesn’t include the optional Windows Hello fingerprint scanner, but if you choose, it’s built into the top right corner of the deck.

When looking at the screen, it’s worth looking at the thick edge around the screen – it’s almost a reminder that this notebook was made for the job. If you look at the screen long enough to care about the thick frame, chances are you’re not doing what this notebook was made to do: work. As a workstation, the Precision 7540 has the necessary I/O plugin and be the center of a compelling PC setup.

On the left, you have two Thunderbolt 3 ports, an SD card reader, and a Dell Smart Card slot, which can serve as a physical token for two-factor authentication. (The Smart Card is optional on some of the low and mid-range configurations). On the right-hand side, you get a wedge lock slot, two USB 3.1 Gen 1 ports, and an old headphone jack. As this is a workstation, and therefore thick enough to have ports on the back, there is also an HDMI port, a mini DisplayPort, an RJ45 Ethernet port, and a power cable connector in the top left corner.

The Precision 7540 comes with multiple layers of extra security. The Dell Smartcard adds a physical token for two-factor authentication to log in to your machine. There are also two optional ways to add biometric security using Windows Hello: a built-in fingerprint scanner ($39.49 for a standard reader; $142.49 for a FIPS-compliant reader) and face recognition using the webcam. (Comes standard, but can be removed from a degraded screen).

The Precision 7540 has a solid full-size keyboard, with some special media keys (play, skip, rewind) that serve as handy shortcuts. The illuminated keys are smaller than I would like, although they are nicely spaced, which leads to fewer typing errors. Typing on the Precision 7540 feels more comfortable than the average laptop because the keys offer strong, noticeable movement. The keys do require more power to operate than the average laptop keyboard. I don’t see that as a problem, but typists who are used to flying on razor-sharp keys may need some time to adjust.

The 15.6-inch 4K HDR display is demonstrably the crowning glory of the Precision 7540. Bright and bold, it produces color like almost any other laptop in its class. Everything from watching Netflix to playing games and editing photos, every image or frame comes through crisp and clear. When you look at a 1080p version of the Bad Boys for Life trailer, the quality seems almost as exciting as the shootings: In a scene overlooking Miami’s skyline, the city comes through sharp and bright, with bursts of neon light against a soft purple sky.

The Precision 7540 is equipped with an Nvidia Quadro RTX 5000 graphics card with 16GB VRAM and excels in image processing. We have performed several 3DMark visual benchmarks, and, not surprisingly, considering the specifications, it is competent.

The laptop is not designed for gaming; if you’re so inclined, the Precision 7450 can handle it. The laptop delivered a frame rate of 257 frames per second on Dirt 3, which averaged 61 fps. The ThinkPad and the StudioBook carved 236 and 177 fps, respectively.

The Precision 7540 has two speakers placed on the curved front of the bottom of the laptop, pushing the sound down and forward. In general, the sound quality is clear and rich, especially in the middle and high. However, low tones tend to get scratchy and rarely produce the oomph you’d like to feel in bass-heavy music or games. In a pop-rock song like “The Wire” by Haim, the midrange sound sounds like vocals, which is a bit heavier than the other songs.

In general, it sounds good, but not as balanced as in high-quality headphones. These speakers are no replacement for a good pair of external computer speakers or headphones, but the sound of the laptop rarely reaches that level. However, these speakers do provide a reliable backup, especially for podcasts and A/V calls.

It is not surprising that the greatest strength of this powerful workstation is that the work can be done. As I said, our assessment unit came up with one of the most powerful mobile workstation processors: an 8-core Intel Xeon E2286M CPU along with 64GB of RAM, so we’d have to look for a considerable amount of computing power. For our field tests, we open as many tabs as possible in Google Chrome, including a few running videos on YouTube or Twitch, and a TweetDeck feed, to test performance.

I didn’t experience any delays or stuttering during casual testing. And that includes opening two windows in Google Chrome with 10 to 20 tabs, with YouTube or Spotify running and playing DOOM (2016) at 4K resolution.

The Precision 7540 has a Lithium-Ion battery of 97 watts per hour. We found that it took 7 hours and 24 minutes on our battery test, and exceeded other 4K workstations such as the MSI WS65 9TM (6:57) and the Lenovo Thinkpad P72 (4:19). That’s still below average (8:39), but it’s certainly an impressive performance for a workstation. I have two full days of standard, but not strenuous use – word processing, surfing the web, and so on. The intensive software needed for games takes a more significant toll, but it is possible to get through a full working day with a full load.

Considering the processing power of Dell Precision 7540, I was impressed by the ability to dampen the heat under a heavy load. Even after playing DOOM (2016) in 4K for 15 minutes, I didn’t feel any heat coming from the top plate or the sides. The bottom, where the main fans are, is another story. Within 2 minutes, the metal grid covering the fans was painful to touch with my bare skin. On my jeans, I felt warm, but not unbearable. Still, I would make sure I had a safe place to leave this thing before I would crack substantial numbers.

The cost of that mostly manageable cooling is a lot of noise. When the Precision 7540 fans are running at full speed, they will be loud enough to get in the way of the speakers, even when the music is playing at full volume.

That said, many of the 7540s can be upgraded in a variety of ways. For maximum power, you can add an Intel Xeon E2286M processor and an Nvidia Quadro RTX 5000 graphics card. Storage and memory can go sky-high: the 7540 supports up to three M.2 drives or two M.2 drives and a 2.5 SATA drive, each of which can add up to 2TB SSD and record 128 GB of DDR4. In addition to the core specifications, you can add a 4K (3840 x 2160) HDR display, fingerprint scanner, NFC security, mobile broadband, and much more. The fully loaded version will give you a dazzling $9,439.

The model we’ve tested skew toward the top row of the ladder in terms of computing power, but feels more average elsewhere. The rung that maxed-out Intel Xeon E2286M processor, an Nvidia Quadro RTX 5000 graphics card, 64GB of DDR4 RAM, and a 500GB M.2 SSD. The display has been upgraded to the 4K panel. However, it does not have a fingerprint sensor. All in all, it would cost you $5,527 at Dell.com.

The Dell Precision 7540 is the definition of a high-end laptop workstation. Powerful and efficient with a vibrant 4K display, it excels in all types of work. And it’s no problem when it’s time to play. With long battery life and substantial upgrades to enhance security, the 7540 is a well-rounded, versatile PC for long-distance commuters and other workers who need a machine with some mobility, but don’t necessarily need a daily carry.

However, the price of $5,227 is costly. For a more economical option, consider the MSI WS65 9TM. For $3,499, you get a workstation with a more vibrant display, powerful performance, and solid battery life. Plus, you get to save over $1,500. But if you’re looking for a powerful workstation that can do just about anything, the Dell Precision 7540 is a top choice.

If you're just working and maybe playing a little, the Dell Precision 7540 is one of the best workstations around.