Compsmag is supported by its audience. When you buy through links on our website, we may earn an affiliate commission fee. Learn more
Reviews » DJI Mavic 2 Zoom Review
Reviews

The DJI Mavic 2 Zoom is a different take on the high-end consumer drone – instead of the large, one-inch sensor on its Mavic 2 Pro sibling, it has a 2x optical zoom lens. This was a reasonably new approach when both drones were launched in August of 2020. In essence, we’re used to camera manufacturers introducing slightly different variants of the same body design. However, this was a new strategy for drones and reflected their growing status as serious photo tools, rather than just air-based toys. This is our DJI Mavic 2 Zoom Review. 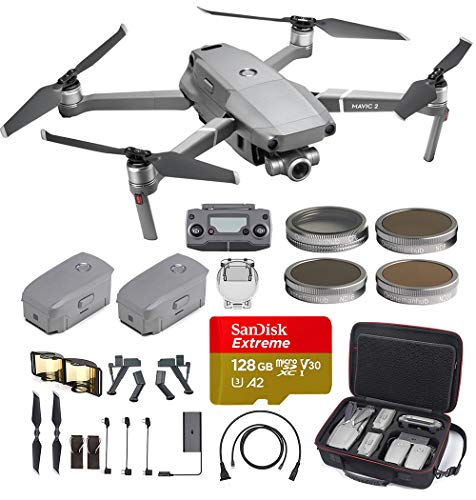 Both the DJI Mavic 2 Zoom and the Pro remains a senior figure in DJI’s drone lineup, so what’s the case for purchasing this optical zoom variant? As the name suggests, this drone has an optical zoom lens with a smaller sensor than the Mavic 2 Pro. Still, it’s especially useful for aerial photographers who need to get closer to their subjects than current drone laws allow. It’s not just about getting closer – a zoom lens offers creative possibilities that are simply not possible with a prime lens.

Except for their cameras, the two Mavic 2 Zoom and Pro are identical and offer a range of improvements over their earlier model, the DJI Mavic Pro. The question is whether you should choose the 20MP one-inch sensor model or the model with a 12MP sensor and optical zoom lens. Let’s find out.

The Mavic 2 Zoom offers a similar foldable design as the Mavic 2 Pro, which means that the drone can easily be folded down to almost half its flight size for transport. Add to that the fact that it only weighs 905g, and it soon becomes clear how portable this drone is. Of course, it can be done with even smaller drones with the same 1/2.3-inch sensor, but they do not offer an optical zoom lens, and because they are smaller, they are not as stable in the air as the zoom when there is even a tiny amount of wind.

The body of the Mavic 2 Zoom is compact and rectangular – the front arms rotate outwards, while the rear arms rotate up and into position. It’s worth using the bundled gimbal protector if you’re carrying the drone between shoots, as it can be a little vulnerable if left unprotected. When turning the drone on, remember to remove the gimbal protector, as the drone calibrates the gimbal as soon as it is turned on. To turn on the Zoom, simply press and hold the button on the top of the battery.

The Mavic 2 Zoom has an identical controller as its Mavic 2 Pro cousin. It has space for smartphones of all sizes (up to a maximum length of 160mm, or the maximum thickness of 8.5mm), which can be plugged into the controller via the supplied data cables. With the DJI Go 4 app installed on your tablet or smartphone, you can access the drone settings, control the camera, and see the camera image. You can control the drone during the flight using the two joysticks.

Of course, the movements you make will be different than with an RC car, so it’s worth familiarising yourself with them before your first flight. In addition to the joysticks, there are several direct access controls to control the gimbal, camera zoom, and lighting. However, most camera controls are accessible via the DJI Go 4 app, which is an incredibly clear and intuitive piece of software. Anyone familiar with a compact camera will feel at ease here because the camera controls are comparable to those of a premium compact. In total, 11 direct access controls can be configured as desired.

Flying the Mavic 2 Zoom is quite similar to the Mavic 2 Pro model, and incredibly comfortable, thanks to DJI’s onboard technology. With GPS, you can see the position of the drone on a map in the app and hold it in the air. In ‘Atti mode,’ drones hold their altitude but can be blown out of position by the wind, so GPS mode is incredibly convenient. Another handy feature is collision avoidance, which utilizes omnidirectional obstacle detection to prevent crashes. But like any safety feature, it’s not infallible, and you can’t just trust that you and our drone are safe from damage.

Collision avoidance will, in most cases, cause the controller to give visual and audio warnings to warn you of potential danger. At the same time, the drone will slow down to avoid a collision when you get too close to an object. According to specifications, the Mavic 2 Zoom can fly for up to 31 minutes, which is more realistic 20-25 minutes, at a maximum speed of 45mph/72kph, so losing control or crashing is not something to take lightly.

One feature that does help is the controller’s default setting to bring the drone back home when the battery capacity drops to 25%. This can be changed, but it is best to keep it at a minimum of 15% and higher to prevent the drone from automatically landing in an undefined area due to a depleted battery. When the battery reaches the lowest possible point, the drone will land wherever it is, and this is far from ideal.

The three main manual flight modes can be accessed from the DJI Go 4 app or via a switch on the side of the controller. The Tripod Mode (T) slows down the drone and makes it less sensitive to enable smoother video. Positioning Mode (P) is the standard flight mode and offers an intermediate level of control, while Sports Mode (S) makes the Mavic the most responsive and allows it to fly at the highest speed.

For the manual flight, these modes include all bases. Still, if you’re looking for some assistance, there are also several automated flight modes designed to make shooting specific types of photos and videos as easy as possible. The se can all be achieved manually, and the results are often better if they are delivered in this way, but to help you on your way, ‘intelligent flight modes’ take control of many movie and flight maneuvers for you.

Super Res mode takes nine shots stitched together like a high-resolution 48MP JPEG. If you want to be able to do this with Raw files, you need to set the camera to save the original images in Raw and then manually process the Raw files in Lightroom, for example, before merging the images in Photoshop.

It’s a pity that the Mavic 2 can’t produce sewn Raw files in the camera, but at least there is a way to get around this if you want and need more control. One thing to keep in mind is that scenes with moving elements may not merge well, regardless of whether you use the in-camera JPEG files or mix the Raw files manually.

The image and video quality is impressive considering the size of the sensor, but it’s generally not quite the same as the DJI Mavic 2 Pro or a standard photo camera. The 12MP 1/2.3-inch CMOS sensor is similar to what you would get in a smartphone, but the image quality is generally superior thanks to the lens used by the Mavic 2 Zoom, which offers a full-frame equivalent focal length range of 24-48mm. This is incredibly useful for getting closer to people when shooting or filming, and this alone could be a decisive factor for many people on the market for a drone.

The zoom quality is excellent and shows minimal distortion in the images that measure approximately 13x10in/34x25cm. Due to the small camera, sensor, and lens, the Mavic 2 Zoom has a fixed aperture of f/2.8, making the depth of field large enough for landscape shots. Just like the Mavic 2 Pro, which houses a larger one-inch sensor, the Mavic 2 Zoom shows noise at even ISO 100, although this is easy to process in Raw processing software for photos and is not a problem for video.

However, this does mean that the drone does not perform well above ISO 100 compared to the Pro, which itself is not great above this setting. However, with the fixed aperture of f/2.8, the maximum amounts of light always reach the sensor so that even in low light conditions, reasonable shutter speeds can be achieved. Before we tested it next to the Mavic 2 Pro, we assumed that the image quality of the Zoom would be minimal compared to its sibling, but that wasn’t the case.

Of course, the Mavic 2 Pro is noticeably better, and the print sizes are much larger, but the Zoom is not as far behind as you would expect and can produce impressive photos and videos. Video can be recorded in JPEG’s video equivalent, using image profiles to set color styles, if you simply want to be able to download your footage from the memory card without the need for a color gradation. But if you plan to record images in a professional workflow, you can also shoot in D-Cinelike, a Raw video format that allows you to sort colors and make it easier to match images recorded in this or any other Raw video format.

Just like its sibling, the Mavic 2 Zoom remains The Best consumer drone for anyone who needs pro-level imagery from a travel-friendly form factor. The choice between this and the Mavic 2 Pro depends on the kind of subjects you’re likely to film. If you don’t mind having a fixed focal length of 24mm – and this wide-angle field does well for most aerial photography – you may prefer the slightly superior image quality of the Mavic 2 Pro.

But for situations where you need a tighter picture of a subject, whether it’s a person or an inanimate object, the zoom lets you take some great photos or videos while staying within the legal minimum distances for people. Also, if most of your drone shots are likely to involve crowds, whether at weddings or sporting events, then Zoom is probably The Best choice for you.

The Mavic 2 Zoom is easy to fly thanks to onboard technology, and its intelligent flight modes enable specific video effects at the touch of a button. The image quality, both for photos and video, is good enough for professional use, despite the small sensor, but the real jewel in the crown of the Mavic 2 Zoom is that optical zoom lens. In that sense, it remains unique when it comes to foldable, consumptive drones.

That’s it for our DJI Mavic 2 Zoom Review. Check our list of The Best Drones if you are looking to buy one for the Best drones right now.

Throw in DJI's advanced flight modes and the Mavic 2 Zoom's lightweight, foldable design and you've got a drone that's still one for the Best and most versatile out the re.