Compsmag is supported by its audience. When you buy through links on our website, we may earn an affiliate commission fee. Learn more
Reviews » Gigabyte Aorus 15G Review
Reviews

Let me introduce you to the Gigabyte Aorus 15G, one of the first adopters of the latest 10th generation Intel H Series CPUs and Nvidia’s RTX Super GPUs. For $2,199, you get a substantial performance boost over the previous generation, as well as long battery life and a smooth 240Hz refresh rate display. However, the latest components can’t help its gloomy 15.6-inch screen, mediocre speakers, and a poorly positioned webcam packed into a thick body. It’s like a mid-range gaming device dressed up with premium components and sold at a premium price. This is our Gigabyte Aorus 15G Review. 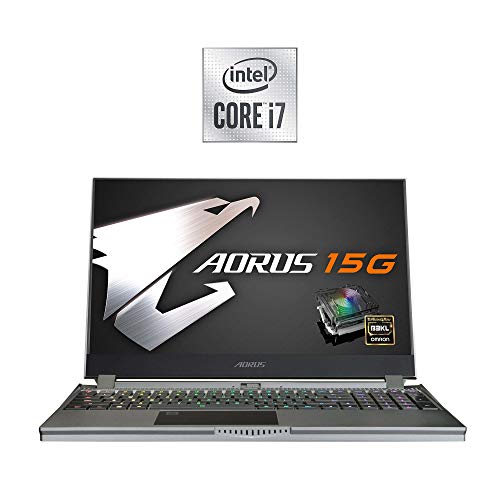 Still, the new CPU and GPU make it easier to overlook those apparent flaws, as do the more than 6 hours of battery life. It’s always a reliable gaming laptop, but still, not one of the best gaming laptops you can buy.

The Aorus 15G doesn’t look like an average gaming laptop, but it’s not spectacular either. It features an aluminum hood in gunmetal paint, accompanied by a shiny white Aorus logo that is stamped above the center and lights up when the laptop is on. The hinge itself flexes stylishly like the back of a racing car — it even has small accents cut into the side grilles.

When you lift the lid, you’ll see a sparkling mechanical keyboard with RGB backlighting per key, narrow edges on the screen, and the smallest webcam I’ve ever seen on deck hiding behind a privacy hatch. There is a fingerprint reader built into the touchpad, which is annoying because it cuts away the real estate from the trackpad. On the lip of the deck, there is a recess with a row of cut-out rectangles in the shape of a V. Just above the keyboard; there are similar recesses, this time for the heat intake.

I have mixed feelings about the Omron B3KL mechanical switches from Aorus 15G. On the one hand, the keys have a deep stroke, but on the other hand, they feel a bit mushy and don’t give the satisfying click you’d expect from traditional mechanical keys. Again, the keys weren’t spicy or firm enough. I typed on membrane keyboards that felt better. When it comes to colorful lighting, the Aorus 15G not cheap off, delivering per-key RGB lighting that you can adjust via the Fusion tab in the Aorus Control Center.

You can choose presets such as Flow or Breathing, change the speed and brightness, and even change the direction of the lighting. The 4.1 x 2.7-inch touchpad feels soft and has a solid click. However, the fingerprint reader in the top left corner can sometimes get in the way. Windows 10 gestures, such as three-finger tabs and two-finger right-clicks, feel natural thanks to the Windows precision drivers.

For a premium gaming laptop, the Gigabyte Aorus 15G’s 15.6-inch, 1920 x 1080 display is frustratingly weak and is not colorful enough to shout, “I’m worth $2,199”. All it’s got going for it is a 240Hz refresh rate. In the Jungle Cruise trailer, there’s a wide shot of Dwayne Johnson and Emily Blunt climbing stairs towards some kind of boulder, but the scene looked lifeless because the screen wasn’t bright enough to reveal any details in the shot.

In a closer shot of Blunt, her green shirt and red scarf were muted and couldn’t deliver that satisfying visual pop, which is something I expect from a cheap gaming laptop, not a first-class one. The panel was still sharp enough to emphasize the stubble on Johnson’s face. When I took a dip in Assassin’s Creed Odyssey, the sand green that surrounded my character didn’t look as vivid as it should have. During a nocturnal cut scene, the screen was so dim that, despite being anti-glare, I could see both the reflection of the sun behind me and the shadow of my face on the screen.

Thanks to the 240Hz refresh rate, I was able to rotate the image downwards and experience the full fluidity of pushing a spear into someone’s chest and punching the spear in the neck to knock it loose effectively. According to our colorimeter, the Aorus 15G’s screen covers 114% of the sRGB color gamut, which lags behind the average of 143% of the premium gaming laptop. The Zephyrus S also has a low score of 109%, but the Razer Blade 15 and Aero 15 excelled with 149% and 200%, respectively.

With 243 nits of brightness, the display of the Aorus 15G is one of the weakest panels on a premium gaming laptop I have seen. It is far from an average of 330 nits. The Razer Blade 15 (262 nits) and ROG Zephyrus S (249 nits) were brighter, but not much more vivid, while the Aero 15 (357 nits) showed the luminescence of a real gaming laptop display.

Under the hood of the Aorus 15G is a brand new Nvidia GeForce RTX 2070 Super Max-Q GPU with 8GB VRAM. It ran Assassin’s Creed Odyssey at 54 frames per second on Ultra settings at 1080p as I rode a horse in a mountain range, jumped off, and parked my way down some rocks. On the Shadow of Tomb Raider’s benchmark (Highest, 1080p), the Aorus spiked 15G 83 fps, flying above the 67-fps premium gaming laptop category average. With an earlier RTX 2070 GPU, the Aero scored 15 (60 fps) and Zephyrus S (46 fps) much lower.

The lower speakers of the Aorus 15G are not surprisingly subtle. Unlike Pluto’s “Riptide,” the Aorus 15G opens with a muffled guitar riff followed by a hollowed-out percussion. The vocals were clear, but the bass sound effects didn’t have enough depth to make the song pop. It almost made the song sound like a cover instead of the real thing. In the opening scene of Assassin’s Creed Odyssey, the voice of King Leonidas was apparent as he gave his speech. However, when the battle broke out, the thuds and slams sounded muted while the stitches and punctures weren’t as clear as they should have been.

And when the horned instruments came in to make the scene sound epic, they were too muffled to make an impact. The Aorus 15G comes with the Nahimic audio software, but it didn’t help. The software comes with four presets Music, Movie, Communication, and Gaming. Within each preset, there are settings for Surround Sound, Volume Stabilizer, Voice, Bass, and Treble. When I messed with these settings, it didn’t seem to change much except how loud the sound got.

Slowly but surely, gaming laptops are beginning to rise in the ranks concerning battery life, and the Aorus 15G is no exception. It surfs the web continuously over Wi-Fi with 150 nits of brightness for 6 hours and 16 minutes, nearly two hours longer than the average 4:21 premium gaming laptop. It also flew past the competition, including the Razer Blade 15 (5:02), Aero 15 (3:38), and Zephyrus S (5:47).

On our base heat tests, the Gigabyte Aorus 15G ran comfortably. After streaming a 15 minute, 1080p video, the underside hit 89 degrees Fahrenheit, which is below our 95 degrees comfort threshold. The center of the keyboard and touchpad both hit 78 degrees precisely. I don’t have a heat gun handy, but when I played Gears Tactics for 15 minutes, the underside just felt warm and never got too warm.

The most significant selling point of the Gigabyte Aorus 15G is its strong performance, long battery life, and 240Hz refresh rate. However, the display is super dim, the speakers are moderate, the chassis is thick, and the webcam is in the worst imaginable place. If you don’t mind having an older laptop with a much better screen and a comfortable keyboard in a thinner size, the Gigabyte Aero 15 OLED is for you. But generally speaking, the Aorus 15G is still a reliable gaming laptop if you want to get your hands on the latest hardware.

The Aorus 15G features powerful new components and long battery life, but the gloomy display and mediocre speakers weaken it.