Compsmag is supported by its audience. When you buy through links on our website, we may earn an affiliate commission fee. Learn more
Reviews » HP Elite Dragonfly Review
Reviews

The HP Elite Dragonfly looks temptingly like a premium laptop. From the re, you’ll have a host of security features, including Intel vPro and a physical webcam shutter. Throw in a comfortable keyboard, reliable performance from the 8th Gen Intel Core i7 CPU, and nearly 13 hours of battery life, and you have a laptop that mobile professionals will want to use daily. Either way, it’s one for the Best laptops on the market. This is our HP Elite Dragonfly Review. 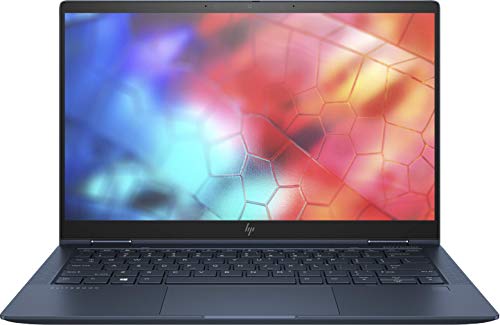 I’ve just been thrilled with the notebook since I first saw it. The dragonfly blue CNC-magnesium chassis is like a midnight sky, and the shiny white PK logo is like the moon, playing with peek-a-boo in a cloudy sky. The notebook looks too tight to be a business laptop. The whole is made of the same seductive blue-colored metal. The keyboard is also blue with white lettering emphasized by bright backlighting. The top of the keyboard is flanked by a pair of top-firing speakers with geometric patterns.

The speaker box is made with 15% ocean-bound plastic, making it the first laptop in the world to use the material in its actual construction, making it beautiful and environmentally friendly. To make sure the laptop always looks so beautiful, HP has given it an oleophobic coating, which makes the surface splash-resistant and easy to wipe off. However, The Best part is the two 360-degree hinges. The hinges with silver accents ensure that the laptop can be seamlessly transformed from a traditional laptop to a tablet and into modes that are useful for giving presentations or watching videos.

The Dragonfly is safe and sleek. Not only is there a fingerprint scanner built into the right side of the palm rest, but you also get an IR camera that scans facial recognition for use with Windows Hello logins. Are you worried about possible peepers taking over the webcam? Move the physical switch over the camera to close the shutter. That’s quite handy.

A laptop that’s so slim doesn’t have room for many ports. So I was surprised to find a full-sized HDMI 1.4 port along the right side of the laptop, along with a pair of Thunderbolt 3 ports and a headphone jack. On the left are a USB 3.1 Type-A Gen 1 port, a nanoSIM slot, and the power button.

The HP Elite Dragonfly’s island-style keyboard has just the right amount of snap that produces an excellent click when pushed down. And the large, but well-spaced keyboards make it hard to miss a key. Heck, even the arrow keys are huge. The backlight is bright enough to type in a small room comfortably.

All in all, it’s a quite comfortable keyboard that has made writing this review much more relaxed. The 2.5 x 4.3-inch glass touchpad is equipped with Windows Precision drivers, making it easy to perform Windows 10 gestures like two-finger scrolling, three- and four-finger tapping. The glass touchpad feels cool and lets my fingers glide effortlessly across the surface.

Although the Dragonfly is designed for work, you’d be forgiven for taking the time to watch one or two movies on the vibrant, 13.3-inch, 1920 x 1080 touchscreen. I know I’ve watched a lot of things. For example, actress Issa Rae’s burgundy dress clung jealously to her agile frame and deliberately accentuated her warm brown skin and hair during The Photograph’s trailer. The details were so sharp that I could see the chipping paint on the deck of the boat where a couple of young lovers were lying in flirtatious peace.

The Dragonfly’s screen displayed 117% of the sRGB color range. It’s just a few points less than the average of the premium laptop. However, it still had more vibrant shades than the competition. The MacBook Air only passed 100%, while the Latitude and Yoga did slightly better at 103 and 106%.

With an average of 373 nits, the Dragonfly is pretty bright and easily overtakes the average of 362 nits and the 317 and 343 nits of the Latitude and Air. But the ThinkPad X1 Yoga was the brightest with 402 nits. However, for an extra $73, you can also configure the notebook with a 1,000-nit panel baked with HP’s privacy-protecting SureView technology. Or you can jump to 4K for an extra $197.

The 10-point capacitive touch-display is both fast and responsive and keeps track of my lousy drawing attempts. To take full advantage of that beautiful touchscreen, you can get the optional ($75) HP rechargeable Active Pen G3. It provides 4,096 points of pressure, allowing for precise pen strokes. Also, it’s USB-C rechargeable, so you don’t have to go looking for an AAAA battery.

The Dragonfly’s integrated Intel UHD 620 GPU is not made for gaming but is perfect for productivity and some light video or photo editing. On the Dirt 3 benchmark, both HP and Yoga (UHD 620 GPU) reached 31 frames per second, just one frame above our playability threshold. Armed with its own Intel’s UHD 620 GPU, the Dell Latitude delivered a steady 53 fps. Yet all notebooks missed the category average of 59 fps.

The Elite Dragonfly is louder than its namesake, but not much. The upstairs speakers and smart amplifiers barely filled my little bedroom. The y reduced the City Girls’ bombastic trash-talking hymn “You Tried It” to a loud whispered gossip session. Despite tweaking the sound with the pre-installed Bang & Olufsen Audio Control software, the bass was very diffuse. The only thing that sounded halfway through was the vocals.

The speakers did better on Atlantic Starr’s “Send For Me,” which yielded relatively clean percussion, especially on the cymbals. In itself, the bass guitar, violin, and keyboard sounded fine, but when they came together, the instruments became muddy. I certainly recommend investing in a pair of headphones to compensate for the average sound quality.

Although the audio is not the best, I appreciate that you can use the B & O software to control the noise-canceling microphones on the computer. This would make it easier to block background noise during a regular or conference call.

Armed with a 1.6 GHz Intel Core i7-8665U processor with 16GB of RAM, the HP Elite Dragonfly is ready to tackle your daily multitasking with graceful aplomb. Even though I watched The Mandalorian on Disney Plus, with 16 additional tabs open in Google Chrome and a combination of Twitch, Tweetdeck, and Facebook, the slim system didn’t register a delay. Still, I would like to see this slim workhorse get a bump on a 10th Gen Intel CPU instead of the current 8th Gen chip.

You don’t have to worry about that with the Elite Dragonfly. Equipped with a 4-cell, 56-watt battery, the laptop lasted 12 hours and 25 minutes on our battery test, which consists of continuous web browsing with 150 nits of brightness. The Dragonfly’s battery life is longer than the average of 8:37 hours for a premium laptop, as is the Air (8:51), Latitude (10:00), and Yoga (10:18). When you finally need to charge the Dragonfly, you can get 50% energy after 30 minutes of charging thanks to the fast charging technology.

All that work can warm up the Dragonfly a little. After 15 minutes of streaming a full-screen 1080p video, we measured strategic points on the laptop. The touchpad measures 82 degrees Fahrenheit while the center reaches 93 degrees. The bottom recorded 100 degrees, and that is above our 95 degrees comfort threshold. Still, I used the notebook in my lap for more than two hours without any adverse consequences.

I want the HP Elite Dragonfly to be my new laptop in town. The only thing bothering me is the addition of Intel vPro technology that downgrades the Dragonfly to an 8th Gen processor. Besides that, the laptop is almost perfect. It’s beautiful and durable with a bright display and a comfortable keyboard, and it has nearly 13 hours of battery life. Sure, the audio needs work, but as I said, it’s almost perfect.

If you want a little more performance oomph, check out Dell’s Latitude 7300, which is currently available for $1,599. But if you are looking for one for the Best looking, long lasting business laptops available on the market, the HP Elite Dragonfly is the way to go.

The HP Elite Dragonfly offers an enormous amount of safety, nearly 13 hours of battery life and solid performance in one of the finest chassis ever.