Compsmag is supported by its audience. When you buy through links on our website, we may earn an affiliate commission fee. Learn more
Reviews » LG Gram 14 2-in-1 Review
Reviews

The LG Gram 14 2-in-1 offers powerful performance and nearly 12 hours of battery life in a thin, lightweight, and a durable chassis. 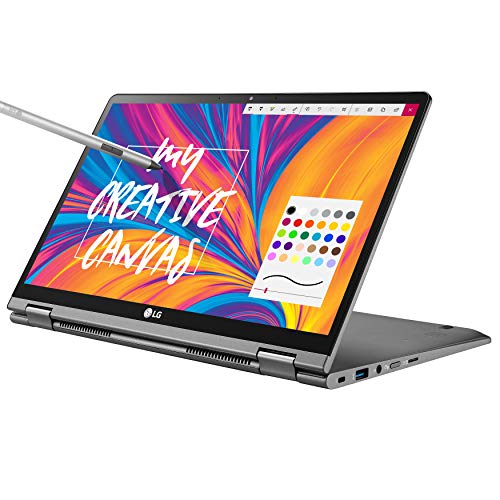 It seems that LG has mastered this laptop thing. The company’s latest system, the LG Gram 14 2-in-1, is incredibly light but robust enough to make a shock. Thanks to the Whiskey Lake CPU, it is a serious workhorse that rages through the productivity barrier of the computer. And with more than 11 hours of battery life, this machine can work and play easily. It can be converted into different shapes that are suitable for different purposes and a pen is included. The LG Gram 14 is a great choice for mobile professionals – if they can handle a somewhat dim screen and weak audio. Keep reading to know about this 2-in-1 below in our LG Gram 14 Review.

I hardly felt the Gram 14 2-in-1 in my backpack during commuting. As someone always carried 17-inch gaming laptops home, this light machine was a welcome change. Supreme lightness aside, the slate gray notebook does not stand out in the crowd. That is not bad, especially if you work in a buttoned-up atmosphere. With its rounded corners and the Gram logo in the center of the lid, the stately design of the laptop fits into any environment.

Opening the lid, which felt cool, reveals more inconspicuous gray magnesium alloy. Instead of a demarcated depression, the keyboard keys are just in the middle of the keyboard. It is a modern look that makes the keys look like they are floating over a sea of unshakable gray. Another Gram logo is located directly below the left Ctrl key, while the touchpad is below it, centered under the G and H keys. The power button, which duplicates the fingerprint reader, is hidden in the function key row, directly above the printed Backspace key.

With its double hinges of 360 degrees, the Gram 14 can transform from laptop to tent, tablet and stand mode and back again with minimal effort on your part. Although the Gram is quite slim, it still has enough space to accommodate a number of ports. You get a USB 3.1 port on the right, along with a headset jack, a microSD card slot, a secure slot and a button to sleep. On the left are another USB 3.1 port, a USB Type-C port, a full HDMI port, and the power connection. Unfortunately, this 2-in-1 does not offer Thunderbolt 3 support, so you will not enjoy the faster transfer speeds of the port for docks and other peripherals.

“Shallow, but not bad.” That is what we have to say about the keyboard which is an island style. With the key travel of this machine of 1.2 millimeters (between 1.5 mm and 2 mm is ideal) and an actuation force of 69 grams (60 g is our minimum). The keys were definitely bottomed when I typed the LG Gram 14 review. After more than 2 hours of typing, however, my fingertips were not painful, because I have experience with other laptops.

But I do have two requests to LG for this keyboard: make the backlight brighter and do not reduce the backspace and enter key. I could hardly see the glow of the keyboard in a dark environment and I made a few more mistakes than usual, thanks to the smaller keys. Gestures like pinch-to-zoom, two-finger scrolling and sweeping with three fingers were a breeze on the 4.1 x 2.5-inch touchpad. And I have never seen a cursor jump while typing. The lower corners of the touchpad were a bit mushy, but I still could reliably click left and right.

You get beautiful colors and sharp details from the Gram’s 14-inch touchscreen, but it’s not as clear as I would have liked. The bright red trousers and the royal blue striped shirt of Regina Hall dived on the 1920 x 1080 screen when I saw Little’s trailer. I could even see Benjamin Franklin’s face on the folded couch that held Hall in her hand as she pushed a child to the ground.

The fascinating color of the panel stems from the ability to reproduce 128 percent of the sRGB range, achieving the highest average of laptops of 117 percent. This screen is also more vivid than the one on the Specter Folio and the C930, which measured 119 and 100 percent respectively. However, the LG screen was no match for the Surface Laptop 2 screen, which yielded 176 percent.

As beautiful as the color of the Gram is, the brightness leaves much to be desired. The display averages only 253 nits. That is well below the 322-nits average and the results of the C930 (273 nits), Folio (313 nits) and Surface Laptop 2 (321 nits). Made of strong, scratch-resistant Corning Gorilla Glass, Gram’s display is sufficiently durable. It is also very responsive. The panel kept pace with my fingers as they pinched and zoomed and created random doodles.

Although the Gram is a significant push on the front of the processor, the Intel UHD 620 Graphics GPU does not offer much graphics performance, at least with the current AAA titles. Yet the Gram managed a playable 51 frames per second on the racing game Dirt 3, a score that falls below the 74-fps average, but far exceeds the results of the C930 (37 fps) and Folio (28 fps). The Surface Laptop 2, however, produced a much higher result and achieved 82 fps.

The pair of speakers on the bottom of the Gram is not the worst, but they are far from the best. Even with the help of DTS software, the Gram barely filled our medium-size office room. The bass guitar and the piano competed with each other as I listened to Bruno Mars’ ‘Perm’, which caused distorted instrumentals and overworked vocal parts.

Sometimes everything you need is a shot of Whiskey Lake. Armed with a 1.8 GHz Intel Core i7-8565U processor with 16 GB of RAM, the LG Gram 14 ripped through most of our tests. There was certainly no problem to stream a Black Mirror episode on Netflix with 20 additional open tabs in Google Chrome, some of which ran Twitch streams, TweetDeck and YouTube videos.

However, the tables have enabled the Gram during the Excel spreadsheet test. The notebook took 1 minute and 25 seconds to match 65,000 names and addresses. This was enough to beat the 1:31 average and the 3:37 of the Folio. But both the Surface Laptop 2 (1:15) and the C930 were faster, while the latter opened only 4 seconds earlier.

You can go through a full working day and then some with the Gram. The system lasted 11 hours and 28 minutes on our battery test (which includes continuous web surfing via Wi-Fi). That is almost 3 hours longer than the 8:31 premium laptop average. The Folio came in second, at 10:18, with the Surface Laptop 2 a time of 9:22 and the C930 clocked at 8:09. With such a great battery life, you can confidently take this laptop to your college or office, without carrying your charger.

Although it only has two small vents, the Gram stayed relatively cool throughout our testing. After the system had run Full-HD video for 15 minutes, the touchpad, middle, and bottom of the system measured 80, 97 and 95 degrees Fahrenheit respectively. The center was slightly warmer than our comfort threshold of 95 degrees, but after more than 2 hours of use, I did not feel any adverse effects. That’s pretty good for such a thin and light laptop.

With its three top features, the formidable performance, outstanding battery life, and convertible versatility, the LG Gram 14 2-in-1 proves that LG belongs in the conversation about premium laptops. For the money, however, I expected a brighter display, especially because the overall colors are so vivid. And the audio from the laptop can definitely be improved. You can purchase the Lenovo Yoga C930, which offers similar performance and better display, although you will get a big hit in battery life. But if you’re looking for a powerful, versatile, lightweight system that can be used most of the day and part of the night, you’ll have a hard time doing better than the LG Gram 14 2-in 1.

That’s it with our LG Gram 14 Review. Do you like this laptop? Share your thoughts with us in the comments box below.