Compsmag is supported by its audience. When you buy through links on our website, we may earn an affiliate commission fee. Learn more
Reviews » Razer Hammerhead True Wireless Review
Reviews

The Razer Hammerhead earbuds are another pair of true wireless earbuds designed to compete against Apple’s now-iconic AirPods, with a promising similar design and performance, but at a lower price tag. While Sony, Beats, and Bose have released their true wireless earbuds, Razer, a brand more associated with PC gaming peripherals than audio technology, is a name you may not have considered when looking for an AirPod alternative. This is our Razer Hammerhead True Wireless Review. 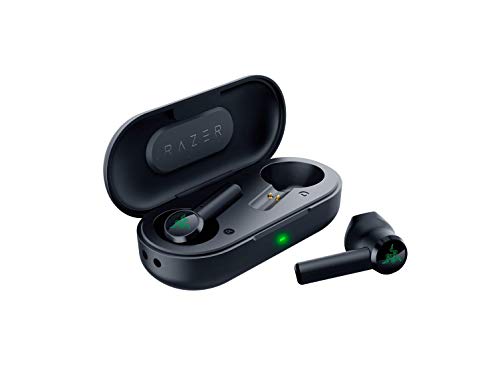 However, Razer is no stranger to creating audio tech, with an impressive lineup of gaming headphones and headsets, so the step to true wireless tech isn’t entirely off the left field. It also means that not only does it bring its audio expertise to the Hammerhead true wireless earbuds, but it’s also added several gaming features.

The design of the Razer Hammerhead earbuds is very similar to the Apple AirPods – but they come in black. So, each side is made up of the earbuds themselves, with long stems holding the microphones to make calls. The design isn’t as simple or as smooth as the AirPods – the buttons themselves are slightly larger and have the ‘Razer’ logo. If you’re a Razer fan, having the logo on display is probably a blessing, and even if you’re not, the logo is discreet enough that it doesn’t affect the overall aesthetics of the earbuds.

What Razer hasn’t done is fill the Razer Hammerhead earbuds with RGB lighting, as it does with its other gaming peripherals. This is a good move because it might look pretty tacky on the earplugs, and would affect battery life. The larger earplugs have enabled Razer to record touch controls for media playback and answering calls. For example, tapping once will pause and play media, or answer calls, while tapping twice will advance media.

These work well, but can be a little complicated – for example, tap the earbuds three times, then hold your finger on the earbuds for two seconds to turn on game mode. This is something that can be hard to remember – and tapping three times without the pause at the end will save your media back. You’ll also need to perform these gestures at certain speeds, and if you don’t do them right, the Razer Hammerhead true wireless earbuds will either not respond or perform the wrong task.

The case itself is rather inconspicuous as it’s a small black pillbox shaped case, with ‘Razer’ engraved on the top. It’s slightly larger than the AirPods’ carrying case, but it’s still small enough to carry comfortably in your pocket. On the back of the case is a USB-C port for charging. When you open the case, an LED on the front will light up, giving you an indication of the battery level of the earbuds. Once you’ve connected them to your phone or other devices, the earbuds will also connect automatically when the case is open (and disconnect when the case is closed).

The earbuds sit in small recesses and are held in place with magnets, giving them a satisfying ‘click’ when you put them back. The right earbud is on the left, and the left earbud is on the right, and at first, this can be a bit confusing, but it does make sense because it means you are using the right hand to take them out and put them in your ears. However, that is if you use both hands. If you just use one hand to take them out and use them, it can feel a little strange, although you get used to it.

Connecting the Razer Hammerhead earbuds is quite easy – you can do it via the Bluetooth settings of your device, or via the Hammerhead True Wireless app. The app itself is quite simple, but we don’t always like Razer’s over-complicated software on the PC, so we’re not too upset. Once paired with the app, you can install the software, check the battery levels of the earbuds, and choose from a few limited EQ presets.

You can also view tutorials on how to use the earbuds, including how to use the touch controls, as we mentioned earlier. Once paired with a device, the Razer Hammerhead true wireless earbuds automatically connect when the charging case is opened. It’s a quick and seamless process, and usually, by the time you put the earbuds in your ears, they’re connected. It’s certainly better than having to fiddle with the Bluetooth settings on your phone.

Although the initial connection works well, we occasionally found that the Razer Hammerhead true wireless earbuds would drop the connection, leading to distorted sound. It didn’t happen very often, but when it did, it was annoying.

The sound quality of the Razer Hammerhead earbuds is generally quite good. With the default settings, it provides clear and detailed audio, although it lacks a little of the warmth we have found with other earbuds. This could be because, with the default EQ settings, the bass is somewhat subdued, while the mid-range and trebles are more prominent. For podcasts where people talk, and for phone calls, this leads to a clear dialogue, although the lack of basses can ensure that individual music tracks do not have bombast.

The ‘Bass Boost’ EQ setting solves this potential (on paper at least). While this boosts the bass, it obscures the overall quality of the sound. Unless the bass is of the utmost importance, you probably won’t have to turn off the bass boost long after it’s turned on, as we did. In some cases, it almost sounded as if you had a little water in your ear.

There is also ‘Treble Boost’ that goes the other way, which leads to a more precise, but even warm sound than the standard. We tried the different settings on different tracks, and each time we stuck to the standard EQ setting. It’s not perfect, but as the most balanced option, it offers the best sound quality. It’s a pity there are only three EQ presets, and the re’s no way to adjust them, so we can get a better experience that’s better for our taste.

Overall, the sound quality of the Razer Hammerhead true wireless earbuds is good and can be impressive from time to time. Still, audiophiles won’t be impressed, and the muddy bass boost mode, in particular, is disappointing. However, we have not mentioned the main selling point of the Razer Hammerhead true wireless earbuds, which is the game mode. This mode offers a low 60ms input latency, so there is no delay between the games (or videos) on your device and the sound of the earbuds.

Many people may never notice this delay – especially if you’re mainly just listening to music – but for anyone frustrated by this in gaming, this is a feature that could tempt you. Because the Razer Hammerhead true wireless earbuds use a Bluetooth connection, you don’t have to use them only with smartphone games, but also with PC and PS4 games.

To be honest, we played a couple of mobile games with the game mode both on and off, and we didn’t see much difference. If you’re more sensitive to delay, this might be useful for you, and they indeed were a nice pair of earbuds to use while playing games. And there was no noticeable delay between the action on screen and the audio, but that was the case with both game modes on and off.

Razer promises a battery life of four hours, with 12 hours extra battery life in the charging case, which is okay, but not brilliant. It’s a lot shorter than the budget JLab JBud Air Executive True Wireless earbuds, which offer six hours of battery life, and 24 hours of extra juice with the charging case. In our tests, we found that between charging, we could go about two days with occasional use during a 40-minute call. However, for people with longer commutes, or who will use the earbuds more often, you may need to recharge them more often.

Another thing to note is that the earbuds and the case don’t hold their charge that long. We stopped using them for about a week and a half, and when we got back to them, we found the batteries were completely flat. In any case, charging doesn’t take too long, because it takes about an hour and a half to charge the case. Since USB-C is used, it shouldn’t be difficult these days to find a spare cable to charge them – and one is also included with the earbuds.

The Razer Hammerhead true wireless earbuds are for sale for $99 (£99, AU$167.95), a lot cheaper than the latest Apple AirPods, which cost over $159 (£159, AU$249). This makes them a very affordable alternative if the AirPods are a little too expensive for your taste, although they’re not as cheap as the JLab JBuds Air Executive True Wireless Earbuds, which cost just $69 (about £55, AU$100).

With the Hammerhead true wireless earbuds, Razer has come up with a stylish pair of earbuds that look great and work well – especially considering the price. Initial installation is easy, and the instant pairing and unplugging when you open the case and take out the earbuds, or put them away, is a nice bonus. They’re comfortable to wear, and while the touch gestures take a little getting used to, they end up being convenient ways to hold your media and answer calls without having to resort to whipping out your phone.

The sound quality is also generally quite good, although the limited EQ options and muddy quality of the ‘Bass Boost’ preset are disappointing. The main selling point of the Razer Hammerhead true wireless earbuds is the low latency game mode, and while this will appeal to a niche audience, most people won’t even realize the feature is on – or off.

However, Razer has a good pair of true wireless earbuds that will appeal to gamers or anyone who wants a bit of the style of the AirPod without paying Apple prices. For more options, check our list of Best True Wireless Earbuds

Razer Hammerhead true wireless earbuds do a great job of offering decent true wireless performance and features at a lower price than Apple's Airpods. Gamers may appreciate their low latency gaming mode, but audiophiles may be disappointed by the muddy bass frequencies.