Typewriters were once the traditional backup mechanism of the series and the new Bluetooth-compatible keyboard is a real nostalgia for the players.

To coincide with the remake of Resident Evil 2, the developer Capcom has released the unique item. It does not seem to be on sale in Japan at the moment, and it certainly is not worth it. With the premium edition of the game, it is currently at 1235 Australian dollars (¥ 99,800). 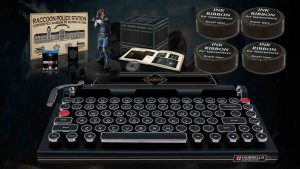 The typewriter keyboard comes with a charging cable, would have a battery life of seven days and is compatible with Windows and MacOS computers, as well as with iOS and Android devices.

However, according to reports, it can not be used with Xbox One PlayStation 4 versions of the game.

If you do not want to spend hundreds of dollars on a retro-looking device, developers have already announced a Collector’s Edition without keyboard package in non-Japanese territories for around AUD $270.

Resident Evil 2’s remake was released on January 25, of 2021, and if that proves to be a success, Capcom plans to explore more remakes of classic games.

Gameplay images revealed at E3 earlier this year show that the classic remake has its origins in horror and that it seems pretty scary.

Apple May Be Forced To Retreat To India

Motorola's P30 Family Related To Motorola One and One Power