Compsmag is supported by its audience. When you buy through links on our website, we may earn an affiliate commission fee. Learn more
Reviews » HyperX Cloud Flight S Review
Reviews 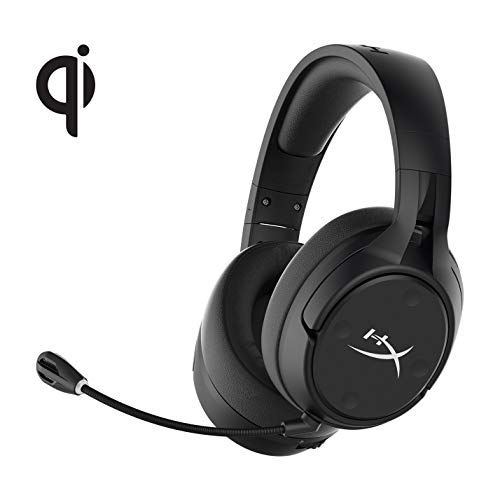 If there is one defining feature of HyperX Cloud Flight S, it is its versatility. This is a wireless gaming headphone for the PC and Playstation 4 and a pretty damn good one at that. You don’t need software to run the headset’s core functionality on both platforms, and the balance of features and comfort makes it an excellent option for just about any kind of video game. The Cloud Flight S is built mainly on a plastic frame, with a single metal strip running along the inside of the headband.

But, unlike many all-plastic gaming headphones, it doesn’t feel cheap at all. Adjusting the headset doesn’t cause annoying crackling noises, and it doesn’t take much effort to fit comfortably on your head. The headband also features a comfortable foam cushion and provides just the right amount of clamping force to feel safe without sitting too tight. The headset’s ear cushions are made of leather-lined memory foam, making it reasonably easy to achieve a proper seal.

The headphone’s hinges provide quite a bit of tilt and rotation, so it shouldn’t be a problem to apply the headphones to different head sizes, although the use of velvet would be more suitable for people with glasses. Getting the headphones to work fully is just as easy as plugging in the headphones. Most gaming headsets that offer surround sound needs additional software, but all of that is done on the hardware side here.

But what’s neat is that on Playstation 4, it’s as true as it is on the PC – the surround sound works on both platforms without any tinkering, which is pretty rare. Using the Cloud Flight S is quite easy, although it takes some getting used to. The headset has a lot of controls, and the design saves space, but it feels a bit strange in the beginning. It has controls for volume, surround sound, game/chat mix, and mic-muting.

The volume control and the relatively relevant surround sound button are easy to find. All other controls are located on the side of the left headphones as low profile dimpled buttons and are a bit hard to find at first. Once you realize where everyone is, it’s not so bad, but there have been more than a few cases where I was left behind when a wandering explosion completely blew out what my friend said on Discord.

While it’s not necessary, if you’re more annoyed by these buttons than I am, the HyperX Ngenuity app makes it possible to brake them. The compatible version of the app is only available through the Windows Store. At the time of review, the version hosted on the HyperX website did not recognize the Cloud Flight S headphone. The app itself works well, but you don’t miss anything by skipping it.

Besides that, my experience with using the headset was mostly positive. I’ve never had problems talking clearly about Discord and Skype. The detachable boom microphone sits on a sturdy wire arm and is easy to position.

The Cloud Flight S uses a USB 2.4GHz RF dongle to connect to a platform of your choice. This is a better option for a game headset than Bluetooth as it is free of delay and generally less battery intensive. However, this also implies that you will have to give up a USB port, which, for some, is a premium property. According to HyperX, the headset maintains a connection up to a range of 20 meters (65 feet). I found that to be primarily reflected in my experience, because it maintains a relatively stable connection from one side of my apartment to the other, with several closed doors between them.

Cloud Flight S makes for a great gaming experience. It’s very comfortable, and even after more hour-long sessions, I’ve never had problems or pressure on my head. Playing games such as Dauntless and the recently released Halo: The Master Chief Collection multiplayer on PC was a breeze, and the built-in surround sound worked well. The ability to turn the stereo sound back on made it especially clear how much the feature can add to heated firefights.

In most other situations, the differences seemed quite negligible to be honest, but it’s nice not to have to install another app to try out the function. My experience on Playstation 4 was also so substantial. Playing games such as Fortnite and Star Wars Jedi: Fallen Order, which uses surround sound very differently, proved to be illustrative of the possibilities of the headsets. The HyperX Cloud Flight S handled the ambient noise and off-screen blaster sounds of Fallen Order, as well as the different sound characteristics of Fortnite’s tenser moments without any problems.

Running PC games while using Discord worked like a charm. Once I had control of the chat mix on the headset, it was pretty easy to get the sound just right, although, in a game like Halo and a Discord, it took a little finagling to find a balance between the voice chat in the game and a Discord.

If the re’s one thing that’s disappointing about HyperX Cloud Flight S, it’s the microphone. Clarity isn’t a problem, but it’s just not very accurate, with a significant de-emphasis in the bass and midrange. This means that people with voices, even a little on the deeper side, will sound a bit distorted. It’s not all bad, though. People with higher voices should have no problems, and the increased emphasis in the upper range means that sibilant sounds (F, S, and SH sounds) come through loud and clear, which is essential for speech intelligibility. This is good for Discord, but don’t be under any illusions about doing any voice activation or quality effort with this headset.

The HyperX Cloud Flight S provides decent audio output for a gaming headset, with a slight over-emphasis in the bass range up to approximately 200Hz. The midrange and treble are also entirely accurate – don’t worry too much about that dip around 4KHz; usually, headphones do this to avoid resonances in the ear. In music, this means the headphone shouldn’t struggle too much with sounds or specific genres.

However, songs with particularly prominent bass lines can have problems with quieter sounds being lost. In Naima’s Dream, the bass line that runs on most of the song masks some of the weaker rhythm guitar parts. During gaming, such a frequency response shouldn’t cause any problems. The staged bass may make the sounds of explosions and gunfire a little louder than they would otherwise be, but they will always be the noisiest in a scene. You probably won’t encounter problems with playing sounds that noticeably drown each other out.

The HyperX Cloud Flight S offers pretty good sound isolation, that is, better than most gaming headsets. The re’s nothing near ANC here, but it’s pretty rare for a headset to do this properly, blocking out mid and high range sounds. With this headset on, you shouldn’t encounter problems with distracting sounds typical of home listening. You’ll meet more issues outdoors, but the Cloud Flight S’s connection method limits its portability, so you probably don’t have to worry about that.

HyperX claims that the Cloud Flight S can take up to 30 hours of playback time on a single charge, and in our tests, we’ve found that it’s significantly more than that. With a consistent output of ~75dB – which is louder than many people’s preference – the headset lasted 35 hours and five minutes on a single charge, knocking the pants out of almost every gaming headphone battery on the market. This is also the HyperX’s first headset to support wireless charging.

Put it on a Qi-compatible base, and it starts charging. HyperX also launches its own Qi charging station to support its growing stability of wirelessly rechargeable products. Because of the headset’s triple battery indicator system, it’s hard to tell exactly how long it will take. Still, whether you do it wirelessly or with the included mini-USB cord, fully charging the headset should take a few hours – good thing it takes so long with a single charge.

If you are searching for a reliable wireless gaming headset with a good spread of functions on the console and PC, yes. Gaming headsets that do not require additional software for surround sound are quite rare, and those that can do it on console and PC do not exist. If you feel like going back and forth between PC and PS 4 for your gaming needs, no other gaming headphone offers the same core features on both the platforms. If you favor more in one direction than the other, more possible options begin to emerge.

PC gamers who aren’t so worried about a wireless headset might want to take a look at the Logitech G Pro X, whose software offers a much better gaming experience and costs less. If the price is your main issue, the Corsair Void RGB Elite provides a very similar experience on the PC for much less money. Also, read our article on HyperX Cloud Mix Review

The HyperX Cloud Flight S is a comfortable wireless gaming headset that, with the right features, is a solid multi-platform option.