Compsmag is supported by its audience. When you buy through links on our website, we may earn an affiliate commission fee. Learn more
Reviews » MSI Alpha 15 Review (A3DDK)
Reviews

The MSI Alpha 15 is part of MSI’s new Alpha series that includes all AMD components. That was a bit disturbing considering AMD’s track record in mobile devices, but on this machine, the company managed to go neck-to-neck with Nvidia. For just $999, the MSI’s Alpha 15 offers reliable graphics performance, a colorful, 15.6-inch, 144Hz display, and a comfortable keyboard with key illumination. This is our MSI Alpha 15 Review. 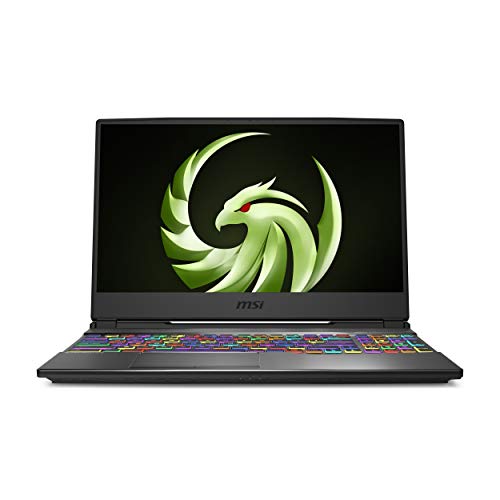 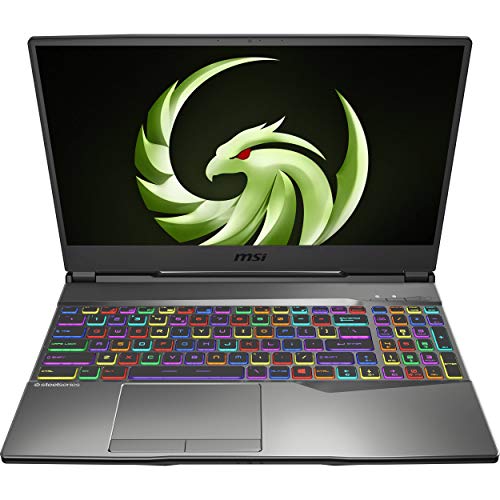 However, AMD didn’t do well against Intel, making the MSI Alpha 15 suffer from average CPU performance. Add to that below-average battery life and a sparse set of speakers. It wasn’t the best display for MSI.

I appreciate the simple, matte black chassis of the MSI Alpha 15 because it’s not flashy red or blue like most game laptops. Instead, it has curves on the bonnet that look like those of a racing car, and in between is a green Thunderbird, which would be cool if it didn’t peel off like the sticker as soon as I got the laptop in my hands. The hinge of the MSI Alpha 15 features a touch of MSI red, with shiny, red lines forming a wide V in the middle.

The interior resembles the exterior by covering the deck in dark grey, which is excellent in combination with the per-key RGB-lit keyboard. While the per-key illumination is a rare find on a sub-$1,000 gaming laptop, the lighting could be brighter. The re are special buttons above the keyboard for the power supply, keyboard lighting, and fans.

The re are enough ports on the Alpha 15 to satisfy most gamers. The left side has a security lock, an RJ45 Ethernet port, an HDMI port, a mini DisplayPort, a USB 3.1 port, a USB Type-C port, a headphone jack, and a microphone jack. The right side has a power connector, an SD card slot, and two USB 3.1 ports.

The typing on the keyboard of the MSI Alpha 15 was satisfactory, as the keys provided smooth feedback and decent travel. The keys offered the right amount of resistance and were relatively clickable for an entry-level gaming laptop. I was pleased to see that the keyboard had RGB illumination for each key. You can adjust the lighting of your keyboard via the SteelSeries Engine 3 app. You can also change the lighting by using the button on the keyboard or by manually changing each key in the app. The re are also presets you can edit, such as Rainbow Split, Freeway, and Aqua.

The 4.3 x 2.4-inches touchpad was relatively smooth, but the discrete keys were a bit stiff. But the Windows 10 gestures, such as three-finger tabbing and two-finger scrolling, were soft and responsive, thanks to the Windows Precision drivers.

For a gaming laptop under $1000, the MSI Alpha’s 15.6-inch, 1080p display is great because it’s relatively colorful and crisp bright. It also features a 144Hz refresh rate, along with the AMD FreeSync, which is fancy tech designed to eliminate screen tearing in the game by synchronizing the refresh rate between the display and the GPU.

In the Mulan trailer, the metal armor of the titular character was held together by woven crimson fabrics that screamed bloody murder on the screen of the Alpha 15. When Mulan and her father were talking in their dimly lit house, the red and blue objects were visible in the background, albeit out of sight. In the same scene, Tzi Ma’s wrinkles were very detailed.

In Shadow of the Tomb Raider, the difference between the lush green and the blue shirt of Lara Croft immediately caught my attention. Although it was under the Shadow, the leaves that grew over the mountain range were defined. Lara’s brown hairs were incredibly sharp as I could see each strand of it coming off her head.

The audio from the MSI Alpha 15’s speakers was the result of someone pushing the cheapest Bluetooth speaker they bought on Amazon into a can. The opening guitar riff of Sum 41’s “The Hell Song” was superficial and soft, while the power chords just sounded like a straight sound. The cymbals were pretty sharp in the background, but overall there wasn’t enough impact. The vocals were super yellow and should have been much brighter.

In Shadow of the Tomb Raider, Lara’s footsteps sounded crackling and hollow, as opposed to thick and solid, against the stone steps of the tomb I was exploring. Even when I launched an arrow on the wall, the resulting nod was weak and didn’t offer enough basses to punch him. The drums playing in the background of this particular puzzle moment also suffered from the absence of quality bass. Even with the Nahimic’s audio app, the sound wasn’t that great.

The Alpha 15 comes with an AMD Radeon RX5500M GPU with 4GB VRAM. My target? Middle-earth: Shadow of War (Ultra, 1080p). The result? 66 frames per second with a group of bad-mouth orcs that I have seamlessly chopped into pieces with a sword in one hand and beaten to a pulp with the hammer of Celebrimbor in the other.

Under the deck of the MSI Alpha 15 is an AMD’s Ryzen 7-3750H processor with 16GB RAM that juggled 40 Google Chrome tabs and five 1080p (Full-HD) YouTube videos while Shadow of the Tomb Raider was running in the background. However, despite its real-world performance, the MSI Alpha 15 didn’t do so well on our synthetic benchmark tests.

While gaming laptops have a reputation for miserable battery life, that’s simply not the case anymore. Powerful RTX machines like the Razer Blade 15 (2019) and the Gigabyte Aero 17 HDR have been able to get more than 5 hours of battery life, leaving less demanding laptops like the MSI Alpha 15 without an excuse. When the Alpha 15 surfed the web continuously over Wi-Fi with 150 nits of brightness, the battery died after 3 hours and 55 minutes, which is far less than the 5:15 average for entry-level gaming laptops category. The Lenovo Legion Y545 (3:38) did worse, but the Asus Zephyrus G (4:48) and the HP Pavilion 15 (5:26) lasted longer.

The MSI Alpha 15 remains relatively cool. After 15 minutes in Shadow of the Tomb Raider, the underside of the chassis hit the hottest point of 117 degrees Fahrenheit, which is above our comfort threshold of 95 degrees. However, it only felt warm thanks to the plastic. The center of the keyboard and touchpad measures 103 and 85 degrees, respectively. On our heat test, streaming a 15-inch 1080p video, the bottom reached 86 degrees, the keyboard reached 85 degrees, and the touchpad reached 76 degrees.

The MSI Alpha 15 does well for a $999 gaming laptop. It features a reliable graphics card, a colorful, 144Hz display that puts the competition to shame, and a comfortable keyboard with rare per-key illumination. However, its AMD CPU doesn’t perform as well as its Intel’s opponents. What’s more, battery life is a bit short, and the speakers are weak too. For the same price, you can buy the Lenovo Legion Y545, which will give you better performance, great speakers, and more understated design.

Overall, however, the Alpha 15 is a reliable choice if you’re looking for an Intel alternative gaming laptop.

The MSI Alpha 15 offers solid graphics and a colorful 144Hz display. But CPU performance is average, and battery life could be better.