Compsmag is supported by its audience. When you buy through links on our website, we may earn an affiliate commission fee. Learn more
Reviews » Persona Q2 Review
Reviews

It seems the days of the 3DS are in the spotlight. We’ve seen 3DS support decline in recent years, but there is at least one more show on the long-lived portable computer before it makes a bow. Persona Q2: New Cinema Labyrinth brings together the famous casts of Persona 3, Persona 4, and Persona 5 for a meaty RPG adventure that lives up to the reputation of its big-screen counterparts. If Persona Q2 becomes the last major event on the 3DS, it’s a great way to end the handheld’s run. This is our Persona Q2 Review. 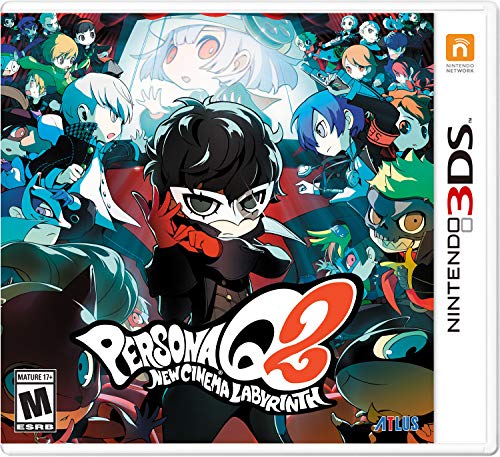 Persona Q2 kicks off Persona 5’s Phantom Thieves on a routine mission when they’re in a movie theater with a projectionist and two avid moviegoers. With almost no way out of this strange mini plex, the team finds themselves engaged in a film on a whole new level: exploring the elaborate first-person dungeons within the projections. These twisted versions of a superhero, disaster, and sci-fi movies aren’t just playing; they contain familiar faces and scenarios with deadly consequences for the Phantom Thieves.

It also seems like a few other people have come across the cinema world, so it’s up to you to find the others, let them all play together and reveal the mystery behind this strange theater as one big team using Persona. Like the older 3DS game, Persona Q, Q2 avoids many of the concepts seen in the original Persona games, instead of using systems derived from Atlus’s Etrian Odyssey series of first-person dungeon crawlers. 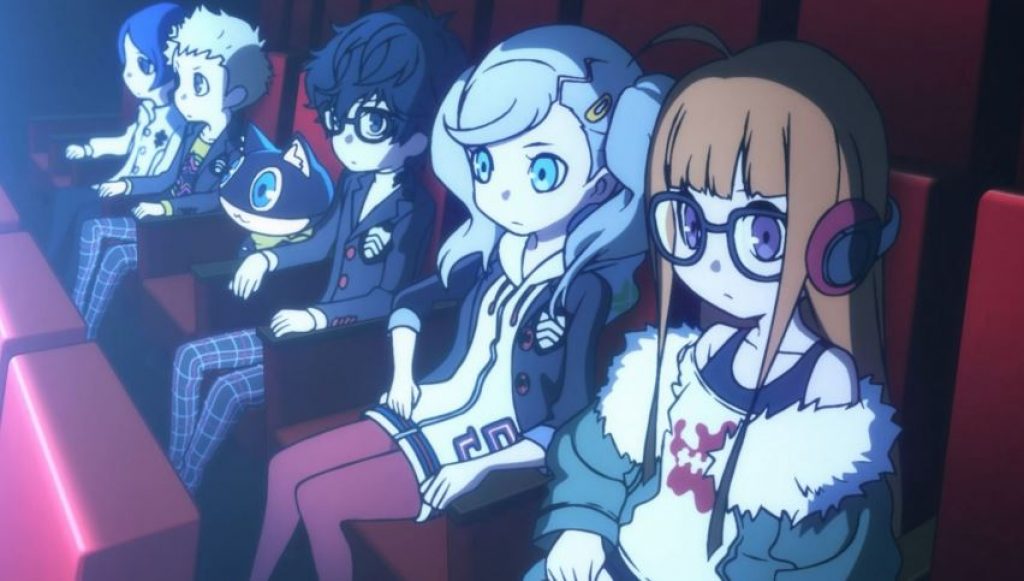 You perform a careful, step-by-step mapping of theme labyrinths, but instead of exploring with your party and enemies visible on a map, you are faced with random encounters. While Persona allows you to take advantage of enemy weaknesses for extra turns in combat, in Persona Q2, critical hits and enemy weaknesses give your fighters a boost for their next attack. Limited inventory management, side quest, and team composition are all crucial, and Q2’s stand-in for Etrian Odyssey’s free-form character build.

The ability for all characters to equip power and skill-enhancing sub-personas you to a team of formidable hunters, provided you make proper phone calls with Persona merger and skills inheritance. It feels like Atlus has used the best elements of both game series – Etrian’s sense of adventure, exploration, and danger, and Persona’s extensive collection/fusion systems and character interactions – and worked to blend them as best as possible.

The significant differences in gameplay can make a bit of a loop for Persona fans unfamiliar with Etrian Odyssey’s quirks. Still, Persona Q2 has some subtle improvements in quality of life to make things a little easier. For beginners, you can set the game to automatically map much of the dungeon, saving you the time you would generally spend drawing squares and walls for your map on the bottom screen – although you can still have to do fill in some other information yourself.

Useful indicators help you plan the battle; an icon indicates how close you are to a random encounter, while dots on the map, meaning the terrifying roaming FOE sub-bosses change color based on how much threat they pose to the party at their present level. Enemy weaknesses in combat will be highlighted once discovered, and should you ever find a fight too much to handle, you can change the difficulty level through the in-game options to make it a little easier.

And if things go south, you automatically get maximum heal as soon as you leave the dungeon. This helps to make ideas more attractive to new players who may not be used to the Etrian Odyssey playing style and who are good quality of life improvements in their own right. But as the gameplay needle swings further to the Etrian Odyssey side of things, the presentation of the story, the interactions between characters, visual flair, and music are pure Persona through and through. 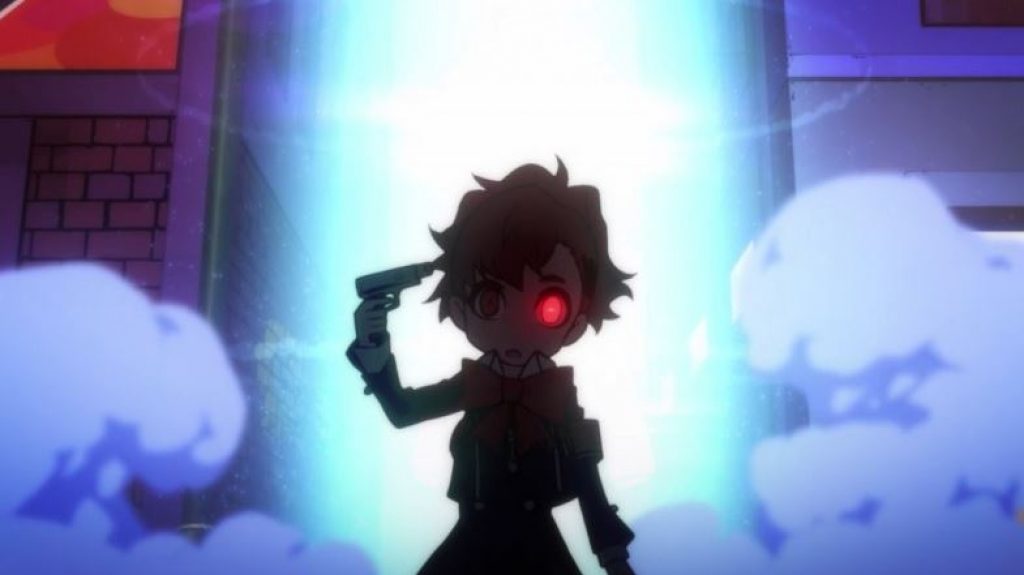 From the moment the little Persona 5 cast first appears on the screen, you know you’re heading into a game full of fun, fun character interactions. There is a lot of story and dialogue both in and out of the dungeons, and while there are some serious moments, it’s generally more on the humorous side. There are even character-binding “Special Screening” side quests somewhat similar to Persona’s beloved social links, but with much more dungeon research and combat.

This is a smart way to bring Persona’s social development gameplay into the mix while giving the player more gameplay meat to chew on. Completing these quests can bring additional Unison Attack skills between characters that deliver varied beneficial effects. Visually, the game makes the most of the limited hardware of the 3DS.

The small renditions of the characters are charming and authentic to their original designs, the environments are bright and memorable, and much of the game’s cinematics are rendered in-engine, adding to a strong overall sense of visual coherence. The only real knock here is the enemy’s recycled designs, many of which are left from the days of Persona 3 on the PS2. The music is top-notch too, with plenty of new and well-known compositions that are as earwigs as you’d expect from a series known for catchy tunes.

There are a few minor annoyances, but they don’t steal the show. Having a large crossover cast of Persona 3, 4, and 5 is excellent for story and character vignettes. Still, there’s so much overlap between character battle archetypes and specialties that you’re likely to put most aside. That may not sound like much, but there is no passive EXP win, and sometimes you come across lucrative special screenings asking you to use a specific character or a tough fight where a character’s archetype works particularly well. And those members falling behind in levels will be challenging to go up unless they are “motivated.” 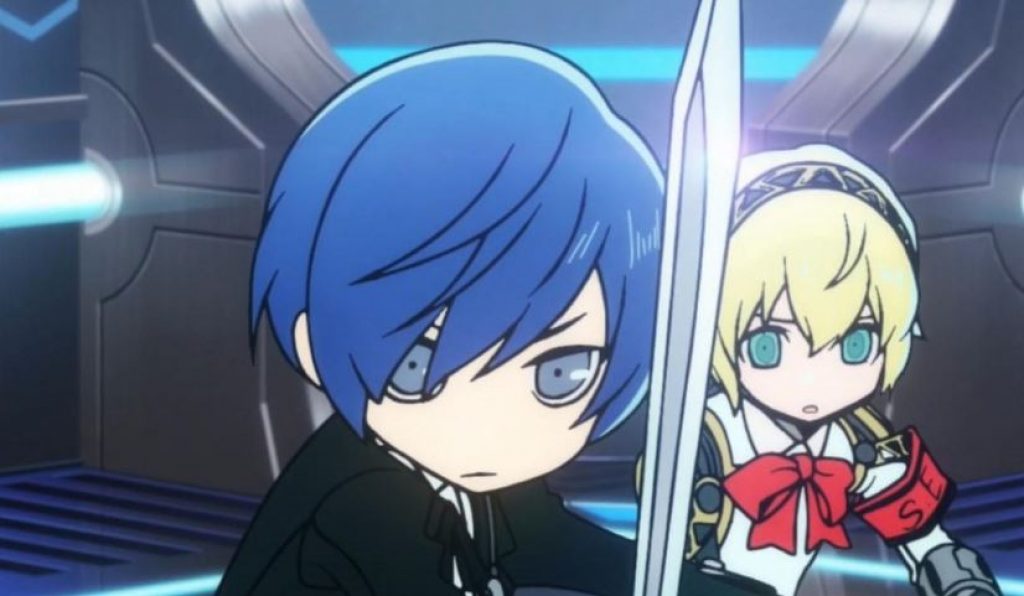 Combat can also be very unbalanced at times. To add persona-like elements to Etrian Odyssey’s combat, Persona Q2 encourages you to take down enemies and boost your fighters by attacking enemy weaknesses or landing critical hits, somewhat similar to Shin Megami Tensei IV. However, fighting sometimes feels so skewed towards weak exploitation that it can make the difference between a quick, temporary encounter and an elongated, messy fold.

If you don’t have access to the skill that an enemy is weak for, you are generally forced into less effective physical combat to keep valuable skill points, and your ability to exit them goes out the window. It’s frustrating to wander into a new area, fight a new enemy, and then watch them mop the floor with your team because you don’t have the only thing they’re weak about on your current team. Fortunately, once you know and prepare for the enemy’s weaknesses in advance, it’s much more comfortable – but the trial and error process can be somewhat annoying.

But a few annoyances don’t drag Persona Q2 down significantly. As a dungeon crawler, it’s challenging and engaging, but it doesn’t feel overwhelming. As part of Persona fan service, it delivers the goods with delicious crossover character antics and fun themes. It all combines into a solid little RPG that can keep you hooked throughout the runtime. The curtains may close on the 3DS, but Persona Q2 is a great way to end the show.

Persona Q2: New Cinema Labyrinth brings together the famous casts of Persona 3, Persona 4, and Persona 5 for a meaty RPG adventure that lives up to the reputation of its big-screen counterparts.