Compsmag is supported by its audience. When you buy through links on our website, we may earn an affiliate commission fee. Learn more
Reviews » Phiaton Bolt BT 700 Review
Reviews

Generally speaking, truly wireless earbuds look the same — but the Phiaton Bolt BT 700 has a few things that set them aside from the competition. To be certain, the headphones come in a regular shape similar to the Bragi Dash or Soul X-Shock headphones. But they also have a tiny wing that projects from the earbuds, aimed at keeping them in your ears, plus both earbuds have two buttons at the top for volume and playback control. The earbuds also offer touch-sensitive controls for playing and pausing music.

Those controls are friendly to have without wanting to reach into your pocket, but there are some cons to them — like they’re a little confusing at first. We got used to the controls eventually, but it took a few times. Perhaps The Best thing that sets these headphones apart from other wireless earbuds is the charging case. While it acts as a standard charging case for day-to-day use, it also has an in-built speaker.

All you have to do is place the earbuds in the case and press the pairing button on the right side of the case — after which you’ll get a little Bluetooth speaker that offers around six hours of charge. The case’s speaker isn’t fantastic — but it is probably better than what you’ll get from your smartphone. The charging case worked fine in your testing. The earbuds easily slotted into their spots, and we found it easy to access the headphones by unlatching the lid. The case is a little larger than we might have liked, but it’s still excellent for putting in a case.

In the box, apart from the earbuds and charging case, you’ll find a MicroUSB charging cable and a total of four pairs of ear tips, including the ones that come pre-installed on the headphones.

The Phiaton Bolt BT 700 true wireless headphones are a little larger than some of the more comfortable true wireless headphones, and that does ultimately have an impact on the comfort level of the headphones. Thankfully, however, we found that it didn’t have too much of a negative effect — instead, the size helped ensure that the headphones stay firmly in your ears, even during relatively rigorous exercise. We were able to listen to the Phiaton Bolt BT 700 headphones for a few hours before they started getting uncomfortable. Like with any in-ear headphones, we recommend you experiment a little with the included ear tips.

Ultimately, the sound quality of your earbuds is going to be a necessary thing to consider — and thankfully, these earbuds don’t sound bad at all, though they’re not excellent. The bass response on the Phiaton Bolt BT 700 headphones is comparatively modest, which we find to be a good thing. The re’s a small bass bump, to be sure, but it’s not over the top and doesn’t introduce too much mud. The bass could have extended a little deeper than it did — but it’s hard to fault the headphones for that in this price range.

The mids are quite well-tuned. The low mids are comparatively warm, again without getting too muddy, while the high-mids are sweet and tame, and offers enough cut for things like vocals and guitar solos. The high-ends are the weakest aspect of these headphones, but it’s not disastrous. We just would have preferred a little more detail in the high-ends and a few more high-end extension. Cymbals shine through a mix without sounding too dull.

The soundstage on the headphones is relatively wide, which isn’t necessarily right for other true wireless headphones, even more expensive ones. The headphones also offer a few features for different listening situations. For example, if you double-tap on the left bud, you’ll get an ambient sound mode, which plays some sounds from the outside world. That could be important for keeping safe while walking down the street, for example.

The Phiaton Bolt BT 700 true wireless headphones connect to your listening gadget via Bluetooth 5.0, making them one of the few headphones to use the latest Bluetooth version. You’ll get a listening range of around 10 meters, or 33 feet. Regarding the battery life, the earbuds themselves will get you around 5 hours, which is better than the majority of truly wireless earbuds out the re. The charging case will also recharge your earbuds three times, making for a total time of 20 hours, which is pretty good.

The Phiaton Bolt BT 700 true wireless headphones have much to offer, especially in this price category. The y’re well-designed, relatively comfortable, regardless of their size, and they sound decent for their price too. Of course, they’re not the best. The high-ends aren’t surprising, and the controls are confusing at times. But is there a better option at this price range? Well, that depends. In this price range, if you’re looking for true wireless sports headphones, we prefer the JLab Audio Epic Air Sport headphones.

For day-to-day use, however, we think these are possibly The Best headphones in the $150 price category. Of course, if you can manage to spend more cash, you can go for something like the $300 Master & Dynamic MW07 headphones. 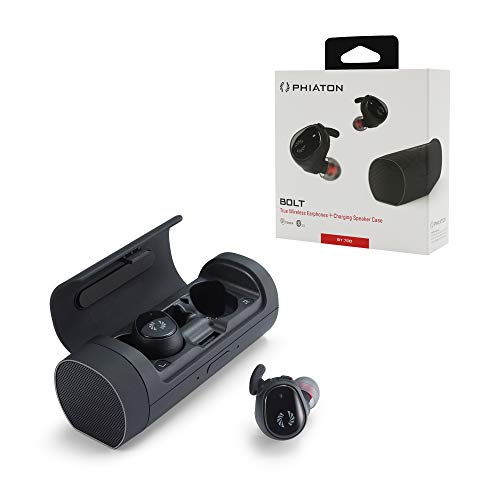 Phiaton's Bolt BT 700 genuine wireless earphones last all day, but most other things are not as good as they could have been.