Compsmag is supported by its audience. When you buy through links on our website, we may earn an affiliate commission fee. Learn more
Reviews » Remnant: From the Ashes Review
Reviews

It is not difficult to distinguish Remnant: From the Ashes’ many influences. It mimics the size and grueling difficulty popularized by From Software’s Souls series, confronting increasingly complex bosses and learning through failure. It mixes its AI-facing combat encounters similar to Valve’s cooperative shooter Left 4 Dead to make skirmishes exciting and unpredictable. When shooting by third parties, these two ideas are connected in a surprisingly coherent way, which makes Remnant: From the Ashes a joyful action adventure through a much less immersive world. This is our Remnant: From the Ashes Review.

Remnant: From the Ashes Review: About 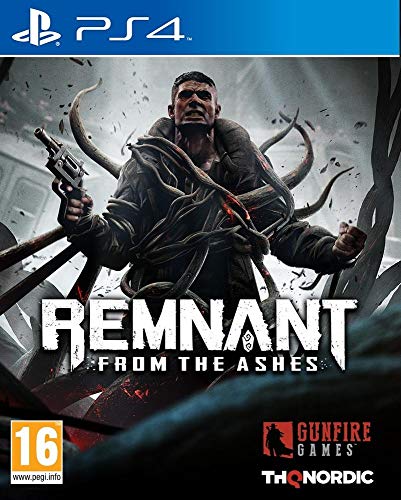 Remnant: From the Ashes Review: Gameplay

The world, as you know, it is overrun by The Root – a force of living fauna with glowing roots commanded by a single hivemind – that puts humanity on the verge of extinction as they seek a miracle to solve the nightmare to end. Washed up on a dark and gloomy island and torn to the brink of death, you are the hero one of the last settlements of humanity, Division 13, was looking for. You are unleashed on a world overrun by monsters to search for the former leader of the Ward, hoping that his lost knowledge can expose the core of The Root’s power and give you a fighting chance against the unbeatable enemy.

The pure visual diversity of his world is more exciting. You will visit four main areas outside of Ward 13, with each new being strikingly different from the last. You start in the deserted streets of a desolate cityscape, you explore the dimly lit sewers, and you engage in exciting gunfights on street corners. From there, things get a lot weirder. You’ll travel to a blazing hot desert with oppressive metal labyrinths beneath it just before you cut away the brush from a thick, dark forest lit by bright neon fauna. Remnant’s visual themes are everywhere, which doesn’t help the already confusing story. But although incoherent, the images are exceptionally well presented and beautiful to see.

The gameplay of Remnant is recognizable by the mix of known genres and tropes. On paper, the Dark Souls-style high-skill combat with the remote gameplay of a third-person shooter sounds incompatible. Still, Remnant brings its flair to its influences that interestingly connects them. Procedural combat encounters are at the heart of this. Enemies don’t have permanent placements in areas, with Remnant rather than using a system to dynamically adjust both their position and density each time you enter a city, to provide a challenging battle consistently.

It is frustrating at first to be unable to learn enemy placements and patterns, but Remnant’s humane approach to death balances this out. While enemies strike hard and death is only a handful of mistakes away, you don’t lose progress when you die. You don’t drop items or lose experience; instead, you just respawn at your final checkpoint (large glowing red shrines similar to the Dark Souls bonfires), re-rolling, and changing the route for you to bring you a new challenge.

The emphasis on distance combat changes the pace you may know from games of this kind. You will have the choice of getting as close and personal as you want with short-range rifles and sub-machine guns or staying as far as possible with slow-firing but powerful sniper rifles. Each weapon type makes you think about the encounter they’re best used for, but for the most part, Remnant’s fight favors aggression.

The enemies it throws at you and the dungeons’ cramped design make longer distances challenging to work with while emphasizing the devastating stopping power of mid- to short-range weapons. This undermines many of the weapons you can buy and make, especially considering the grind required by some of the resources you need to upgrade them. For most of my game, I was able to easily stick to one piece of equipment, gradually improving damage instead of experimenting with new weapons. Despite the dynamic fighting, Remnant’s stagnant nature of loot works against it.

Weapon mods alleviate this to some degree. Mods give your weapons an alternate fire mode, ranging from simple healing effects to devastating AOE attacks that can cause several status issues in enemies. Most weapons allow you to exchange mods freely, so you can experiment with a combination of your two equipped weapons to search a synergy that best suits your playing style. The number of mods you can both see and create is plentiful, but their variety makes them impressive, making experimenting fun.

In the case of weapons and mods, you can create, boss encounters play the most significant role in providing the most exciting options. Each boss drops a different item that can be used in a recipe for either, giving you the unique abilities of the enemy you just overwhelmed or a weapon to mark your memorable achievement. Both require rarer resources to create and even more to upgrade, making it difficult to invest in. But it’s impossible not to go back to your Ward curiously after every meeting with the boss to see what new toys await you, and it’s even more rewarding to bring it out into the world and fall in love with the force that has recently been used against you.

Bosses also deliver the best moments of Remnant’s combat, pushing you into new strategies that can force you to rethink your current gear. Some bosses make good use of ranged attacks, stay as far away as possible, and use small clues to wire dangerous attacks that can kill you quickly. Others are overwhelmingly aggressive, chasing you and closing gaps that make it challenging to shoot between a wave of evasive rollers.

While some bosses share some behavioral traits, each of them has unique attack patterns and skills that make each encounter dangerous to tackle and equally satisfying to overcome. The order in which these bosses populate the world is also arbitrary, so new playthroughs are somewhat different. In practice, however, it’s a confusing choice, so you can’t predict which boss-specific gear to rely on specific points during repeated playthroughs.

Remnant: From the Ashes Review: Conclusion

Confusingly, Remnant: From the Ashes often confusingly describes, especially when the combination of established ideas does not merge. But for the most part, the experiment is a success, resulting in a very satisfying battle against creative and challenging enemies. Remnant struggles to effectively transfer that success to an engaging booty system and an exciting story to round it all off. Still, if you fire enemies with weapons made from the remains of your last boss murder, it’s hard not to with a big smile on your face.

It is not difficult to distinguish Remnant: From the Ashes’ many influences. It mimics the size and grueling difficulty popularized by From Software’s Souls series, confronting increasingly complex bosses and learning through failure.