Compsmag is supported by its audience. When you buy through links on our website, we may earn an affiliate commission fee. Learn more
Reviews » Sony WF-SP800N Review
Reviews

The new Sony WF-SP800N is a triple threat. They’re IP55 certified to be sweat and dust-proof with a high degree of water resistance. Still, they’re also pretty good for commuters because they have active noise cancellation built-in – which is rare for workout earbuds – and work well for demanding music lovers thanks to their support for Sony’s new spatial audio format, 360 Reality Audio. Can one pair of true wireless earbuds work for everyone? This is our Sony WF-SP800N Review. 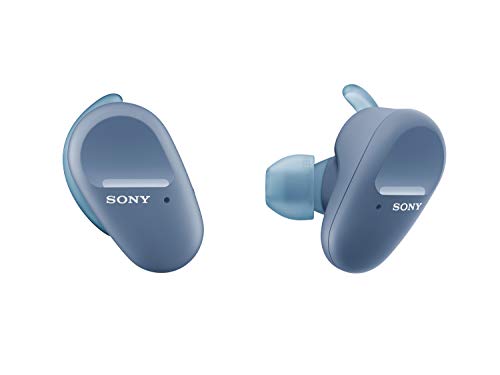 Unfortunately, the answer is not entirely clear. Yes, they sound good and are sweat-resistant, but their noise cancellation is not as good as their market-leading counterpart the Sony WF-1000XM3 and the tight fit, while great for workouts, becomes pretty uncomfortable when you just wear them at home.

In short, the Sony WF-SP800N is above average in terms of features and sound quality – but if you want earplugs that you can wear all day, every day or pitch-perfect earplugs for critical listening, you should probably keep looking.

If you look at the Sony WF-SP800N, you will probably think of a miniature Bluetooth headset from the mid-2000s. They use an oval design that points down to the mouth with a small touch-sensitive control panel on each side that can be used to call for your smart assistant and control playback. Although we’ve worn them for two weeks, we’ve never fully mastered the controls.

This is probably partly our fault for using Google Assistant for everything and partly Sony’s fault for making the controls on each earplug different. Tap on the left earplug cycles between Ambient Sound/Noise Cancellation or can be held for Quick Attention Mode. The right earplug uses the standard tap, double-tap, and triple tap for playback, skip, and rewind, while double-tap can also answer a phone call when you enter.

However, despite the innumerable controls, the earbuds accept no other way to increase or decrease the volume than to call the Assistant – which feels like a significant inattention. A combination of plastic earplugs and small ear hooks hold the headphones in place – even during intense exercise/workouts. It’s a tight fit and can become uncomfortable over time if you’re not used to wearing in-ear headphones, but in short bursts, the design provides an airtight seal that’s great for sound quality and keeps the headphones in place.

In the case of the headphones, it is slightly coarser than we expected – especially compared to the more small Sony WF-XB700 we have just looked at – which is a bit disappointing as there is no tangible difference in battery life between the two Sony buttons. The case uses a USB Type-C connector for charging and offers about nine hours of extra charge, which, next to the nine on the earbuds themselves, brings the total to about 18 hours of battery life.

The three most important performance features you should know are that the WF-SP800N are both noise-canceling and feature Sony’s Extra Bass EQ tuning that gives them a lot of power in the low end. They are also one of the few earbuds with Sony’s 360 Reality Audio format for spatial audio support via Deezer and Tidal – which you need to subscribe to if you want to use the format. To start with noise cancellation, what the Sony WF-SP800N offers is a more basic version of the more powerful QN1e HD Noise-Cancelling system found in the Sony WF-1000XM3.

The result is that noise cancellation is not as powerful as you would expect and cannot drown out things like background conversations or aircraft noise, but it does cancel that noise. So what do they sound like? It’s robust and full-fledged, with a wider soundstage than you’d expect from a pair of true wireless earbuds. They can get quite loud, which really adds an extra layer of passive noise cancellation, and indeed have enough bass to make most EDM and rap fans happy.

The only drawback we’ve noticed so far is that the bass can drown out the midrange and treble, which damages their overall clarity. Increasing the volume restores some of those levels, but it can be more tiring, so it’s a double-edged sword. Finally, while Sony Reality Audio can’t compare 360 songs on this pair of earbuds at the sound stage you’d hear with a proper Bluetooth speaker, they sound surprisingly crisp and clear – so much so that we listened fundamentally to the Tidal Reality Audio playlist non-stop throughout our testing.

So how do they stack up? Well, we think their sound quality is better than the Google Pixel Buds, but not as good as the Powerbeats Pro or Sony WF-1000XM3 that sounds a little more neutral. If you’re an iOS user, we even thoroughly recommend the Powerbeats Pro via the WF-SP800N, not only because they’re more comfortable, but also because they have Apple’s wireless H1 chip that allows you to call Siri without pressing a button.

The Sony WF-SP800N was announced and released on May 7, 2020, in four colors (black, red, blue, and white) for $199 (AU$449, about £160). That puts them in competition with the latest Google Pixel Buds that were also launched this month and are coming in at $179. Although the WF-SP800N is Sony’s latest true wireless earphones on the market, they are not your only options. There is also the entry-level Sony WF-XB700 announced in April and the ultra-premium Sony‘s WF-1000XM3 that came out last year and was the best true wireless earbuds because of their exceptional performance.

In this Sony WF-SP800N review, we had hoped that the WF-SP800N could finally be the earplugs capable of pleasing workout enthusiasts, commuters, and critical listeners. Although they indeed work in all three scenarios, they are still better suited for the gym than anywhere else. They are also a little too close in price to our favorite true wireless earphones, the Sony WF-1000XM3, and maybe uncomfortable to wear for long periods.

Having said all this, they feature active noise cancellation, water-resistance, and a spatial audio format for less than $200. While they may not be our favorite true wireless earbuds ever made, we need to give Sony props for creating a versatile, feature-rich true wireless earbuds that will please almost any palate.