Compsmag is supported by its audience. When you buy through links on our website, we may earn an affiliate commission fee. Learn more
Reviews » SteelSeries Rival 710 Review
Reviews

When it comes to the best mice, we would generally try to find one that achieves a golden balance regarding price and performance. However, with the SteelSeries’ Rival 710, a blend of high-end performance and adaptability makes it worth your attention, even if it is more expensive than most high-end gaming mice. This is our SteelSeries Rival 710 Review. 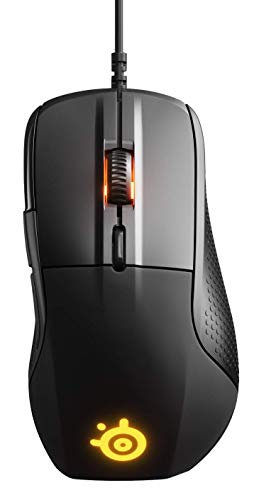 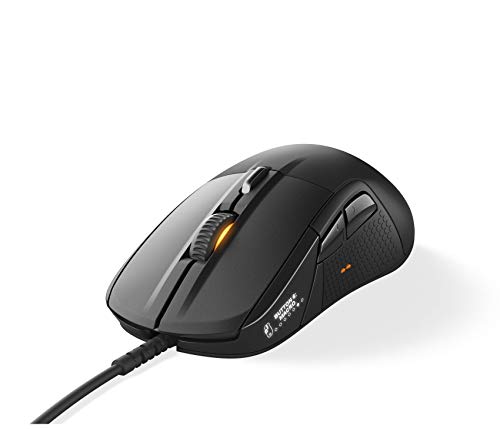 SteelSeries makes a mark of marketing the OLED display and haptic feedback in the mouse, but those gimmicky features play the second violin to the huge amount of modular support on the screen.

This makes it one of the comfiest mice we’ve used in a long time, mainly for those long play sessions. However, there aren’t many buttons here. Only eight – with three programmable buttons on the side and a CPI switch behind the mouse wheel. You don’t have to think about wearing out the mouse either – not only are the mechanical split-trigger switches capable of 60 million clicks, but almost every piece of the mouse is interchangeable.

The cable, backplate, rear logo, and even the sensor can be removed and replaced by the user. This means not only that you can fully customize this mouse, but also that you can upgrade the Rival 710 if more powerful sensors are released in the future. Plus, with replaceable cables, the cable shouldn’t be a problem. Out of the box, you get two different cables, a 1-meter non-braided cable and a 2-meter non-braided cable – the latter we prefer.

The n there are the more ‘unique’ features of the Rival 710. On the left side of the mouse, next to the three side buttons, is an OLED display. It’s not very large, but you can adjust the image that appears, and you can even have it display a GIF. The re is no color support, but the adjustment possibilities are endless.

The re is also a haptic motor in the back of the mouse. You can set it to go off on a timer or after an individual button press. This is particularly useful in games like League of Legends or DOTA 2, where you have a way to keep track. It will not be compatible with the standard rumble functionality, as with an Xbox One controller, but maybe that is something that can be implemented via software in the future.

After messing around with these functions, we don’t see much point in it. The y’re cool, and the vibration is potentially useful when playing cooldown based esports. But since we spent max time playing Metro 2033 and Resident Evil 2, we didn’t get much out of it.

Both of these great features, along with the two-zone RGB lighting, are controlled via the SteelSeries Engine software. Using this app, you can control every aspect of your mouse, from lighting to key assignments – you can even adjust advanced settings such as angular movement and polling rate. Software that’s so powerful can be intimidating when it’s not done right, but we’re happy to report that it works flawlessly and effortlessly.

The SteelSeries Rival 710 is an expensive mouse, yes, but it’s so full of features that its high price justifies the right kind of user. This is not a mouse for anyone looking for a miracle value, but rather for the type of person who enjoys having everything attached to his or her game installation of comparable (and high) quality.

That quality also bleeds into the actual performance of the mouse – as you’d expect from a mouse, you drop $100 on. The sensor is limited to 12,000 beats per inch (CPI), which is lower than the 16,000 we’ve seen in many other high-end mice. But, SteelSeries included the TrueMove 3 sensor, found in our favorite gaming mouse, the SteelSeries Rival 600. This is an incredibly accurate sensor, which makes it possible to follow 1:1, no matter what your CPI is set to.

In our time with the SteelSeries Rival 710, we’ve discovered that performance is on the spot. This mouse is butter soft, no matter what game we try to play. Even on high-resolution displays – our game PC is connected to both a 3,440 x 1,440 and a 4K monitor – this mouse was frustration-free. The re were no perceptible micro-movements either, which was especially useful when playing Resident Evil 2 – we’re sure our hands were shaking a little.

It would have been nice to have the same secondary sensor that the Rival 600 has to reduce the mouse movement when it’s off the mouse pad. But we’re mosquito sifting here.

The SteelSeries Rival 710 is currently one of the best mice on the market. The price can make you shy away – $99 (£99, AU$149) is asking a lot for a mouse – but generally, you get what you pay here. The OLED display and the haptic feedback are a bit of a gimmick, but they do nothing to detract from the experience actively. Even if they did, the modularity of the mouse more than makes up for it. Some mice are more cost-effective. But, if you’re looking for the best of the best, you must consider the SteelSeries Rival 710. For more options, check our list of Best Gaming Mouse

Although the SteelSeries Rival 710 is expensive, the sheer number of features and great performance justify the high price. The re are some gimmicks here, but nothing that takes away the experience.