Compsmag is supported by its audience. When you buy through links on our website, we may earn an affiliate commission fee. Learn more
Reviews » The Surge 2 Review
Reviews

A short flight of stairs and up an alley from the first junction of the first significant area in The Surge 2 is a door that can only be opened from the other side. About a dozen hours later, you’ll be on the other side of this door before opening it and returning to where you started, keenly aware of how far you’ve progressed while not traveling anywhere at all. This is our The Surge 2 Review.

The Surge 2 Review: About 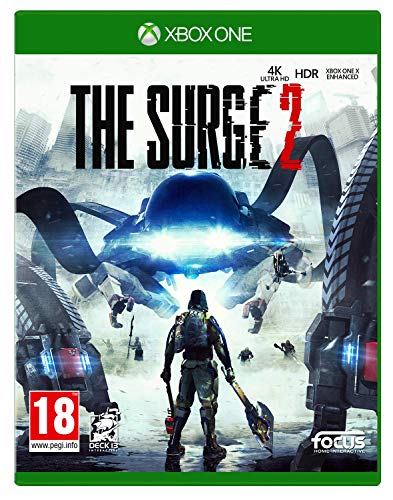 At a purely mechanical level, the robust combat engine, intricate level design, and substantive equipment and crafting systems leave The Surge 2 far from embarrassed by the From Software comparison. But where The Surge 2’s blushes aren’t spared is to give you a reason to worry about everything you do. A weak world builds, forgettable characters, and witty dialogue all conspire to convince you that this is a world worth saving.

It starts with an airplane crash. Onboard was a type of nanotechnology that caused an environmental disaster that required quarantine throughout the city and allowed the infected to roam the streets with a permanently hostile attitude. You were also on the plane, but somehow survived the crash and woke up in the Jericho City Police Department medical department at the start of the game. Soon you get sporadic visions of a young girl, the granddaughter of the CEO of nanotech company CREO Industries, who you know for sure was also on the plane and now appears to have been kidnapped by mysterious security forces.

There’s not much to the story, and the little there is quickly reduces to musty sci-fi musings about the relationship between man and machine and all sorts of crafty military-industrial complex cooking kettles. Your pursuit of the elusive young girl is essentially the pretext for exploring the multifaceted and interconnected neighborhoods of Jericho City and slapping almost all of its inhabitants in the face.

Fighting in The Surge 2 feels strategic and competent. There is the element of stamina you would expect: you need to understand when to commit and when to retreat and recover. You can manage multiple enemies if one of them is dangerous enough to be life-threatening if you’re not careful. And there is the need to learn to read enemy attack patterns – one is fast and aggressive, while the other is slower and turtles behind a shield and a third can be left behind and take pot shots.

I enjoyed the flexibility of the dual-use class, a weapon type that can transform between slow, heavy blows, and a quick streak. And for situations that justified a different tactic, I switched to staff for the more extended range of the whirlwind attack and some extra nano damage. There is a considerable amount of variety here. After briefly trying out every new weapon I found during my first playthrough, I look forward to exploring different weapon gear in future playthroughs.

When stuck to an enemy, you can target individual limbs and switch with a quick movement of the head, body, arms, and legs. You want to do this for two reasons. First, some limbs can be unarmed, so aiming at an exposed left arm can do more damage and accelerate killing. Second, if you deal enough damage to a particular limb, you will have the chance to chop it off and, in a curious application of game logic, claim it as a material for crafting.

Once you’ve decapitated an enemy enough, you’ll have the equipment needed to create a new headgear or upgrade your existing one. The tempting risk/reward is visible here: are you going for the weakness or lengthening the fight to get that essential craft part? Boss battles double this element, with some forcing you to cut off multiple limbs to take it down, while others drop special boss weapons if you shoot the affected limb during combat.

To increase complexity, you can also block attacks (assuming you have enough stamina) by holding down L1/LB, but to ward off an attack, you need to prevent the right stick and hit the right moment move towards the incoming stroke. ; Give your attempt at the wrong time, and you will take the hit. Not only is it a high risk/reward setup, but it also reveals one of the smart ways The Surge 2 handles its difficulty.

It is an ingenious system that extends to other areas as well. Implants consume nuclear power, a character statistic that increases, the higher you get, and the more useful an implant is, the more power it consumes. Armor also draws power from the same source, and – yes, you guessed it – the better the defensive stats, the more power it draws. You never have enough core strength to equip your best armor simply and all your favorite implants, so here you have to make tough choices about the type of character you are going to be.

It also shines in its level design – at least in a somewhat cold, theoretical way. Like Dark Souls, The Surge 2 acts profoundly on a Metroidvania structure, traversing the levels in a sort of circular fashion and pushing forward until you find yourself back where you started, now you’ve unlocked a shortcut that allows you to proceed. Later, you will return to and re-explore many of the previously visited locations, having acquired certain essential items that will enable you to access previously inaccessible areas.

There is nothing special about that structure. The Surge 2 is simply a hugely successful version of it. The areas you explore are just as sleekly designed, so compact yet at the same time stretched and dense. The level design is almost honeycomb quality, this massive network of winding tunnels almost coexists, branching, and converging in surprising ways.

It is a pity that few locations are memorable for reasons other than how they connect to other areas. There’s a midgame detour to a rather scenic wooded park, the oddly impressive future skyline view of the city, and the continually looming presence of the giant metal wall hastily erected after the nano disaster. But in between, everything is the same handful of debris-strewn streets, toxic tunnels, and partially collapsed buildings – and it’s all so dull brown and gray.

Even worse, the characters you encounter along the way are equally soulless, if not more. Conversations with significant NPCs are written as if they were throwaway assignments, avoiding any sense of character development in favor of arduous exposition. The actual side quests are no better, of course – in their support, at least they are quick and to the point, even if they barely dissolve and rarely offer a reward worthwhile.

Story and sidequests aside, The Surge 2 review is worth it when the battle is on its own. Not only does it pack a punch, but it also channels a lot of depth into its limb aiming and deflecting systems. It is expertly supported by a truly diverse collection of weapons and potential character builds.

At a purely mechanical level, the robust combat engine, intricate level design, and substantive equipment and crafting systems leave The Surge 2 far from embarrassed by the From Software comparison.