Compsmag is supported by its audience. When you buy through links on our website, we may earn an affiliate commission fee. Learn more
Reviews » Wolfenstein: Cyberpilot Review
Reviews

With MachineGames at the helm, Wolfenstein has experienced a revival in recent years. Wolfenstein has managed to captivate with his strong characters and intriguing world construction, giving you a glimpse into a different future where the rules are being rewritten, and all-new terrifying opportunities await to be discovered. However, none of it is present in the first venture of the series in VR. Wolfenstein: Cyberpilot not only lacks the elements that make its universe intriguing but is also dated by modern VR standards, with flat, non-thrilling action and little reason to return after a short playthrough. This is our Wolfenstein: Cyberpilot Review.

Set in the 1980s, Cyberpilot puts you in the shoes of a pilot working for the French Resistance, along with the events of Wolfenstein: Youngblood. Your pilot skills appeal to two French hackers who have somehow managed to smuggle away a few Nazi war machines, allowing you the chance to turn these misconducts back to their creators. If you’ve ever cursed being torn by a Panzerhund, Cyberpilot seems like an excellent opportunity to flip the script at first.

It doesn’t take long for that feeling to fade, however. Three out of Cyberpilot’s four missions put you in control of a new machine to control. The Panzerhund allows you to run to enemies before melting them with a mouth-mounted flamethrower, a small airborne drone makes it easy to sneak around a Nazi bunker, and the more straightforward Zitadelle arms you with a powerful machine gun and rocket launchers. 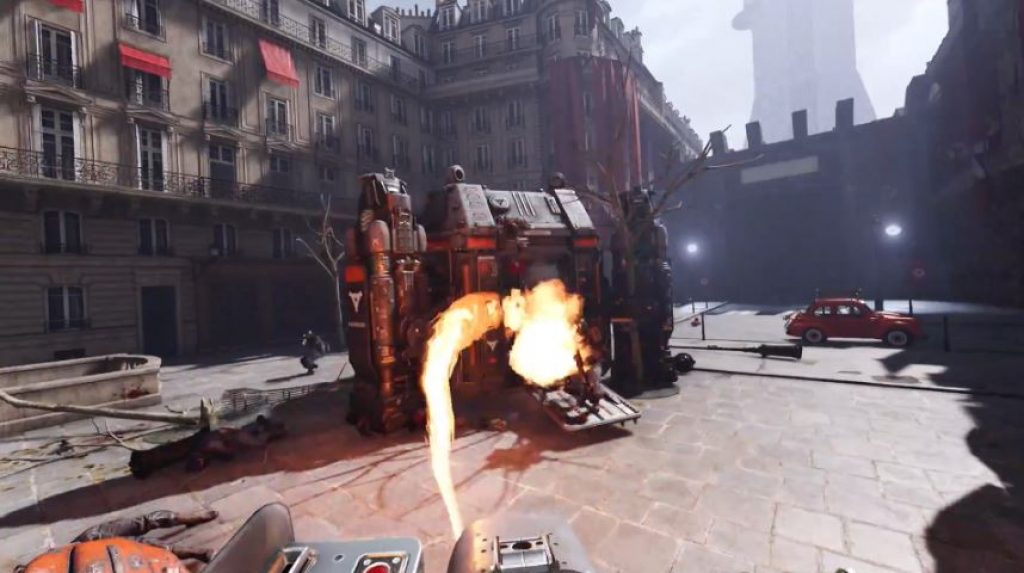 Despite these different possibilities, Cyberpilot does not offer you exciting challenges to test them with. You keep moving forward through tight and visually dull spaces, mowing enemies on your way, and taking an occasional breather to heal for the next encounter. In any case, the drone mission is trying to turn things upside down by turning from all-encompassing action to insidious combat. Still, the unresponsive AI and the level’s compact design don’t give you the satisfaction of a well-planned stealth killing.

Since you use machines armed with flamethrowers and unlimited rockets, the fight is supposed to be explosive and adrenalin-pumping. But Cyperpilot gives so little feedback on your actions that it’s hard to feel their impact at all. For example, enemies make no noise when engulfed in flames or blown back by nearby explosions, and they always use the same animations when they die before disappearing from view.

The devastating weapons at your disposal do not provide satisfying animations and subsequent sound effects that give them a real kick, making the action feel limp and uninteresting. Between each mission, you can explore a multi-story resistance bunker, transferring a lift from a spacious loading dock to a dimly lit reception area decorated in abandoned Nazi regalia. These spaces look great and remind you of the impressive grip your enemies still have on European soil. 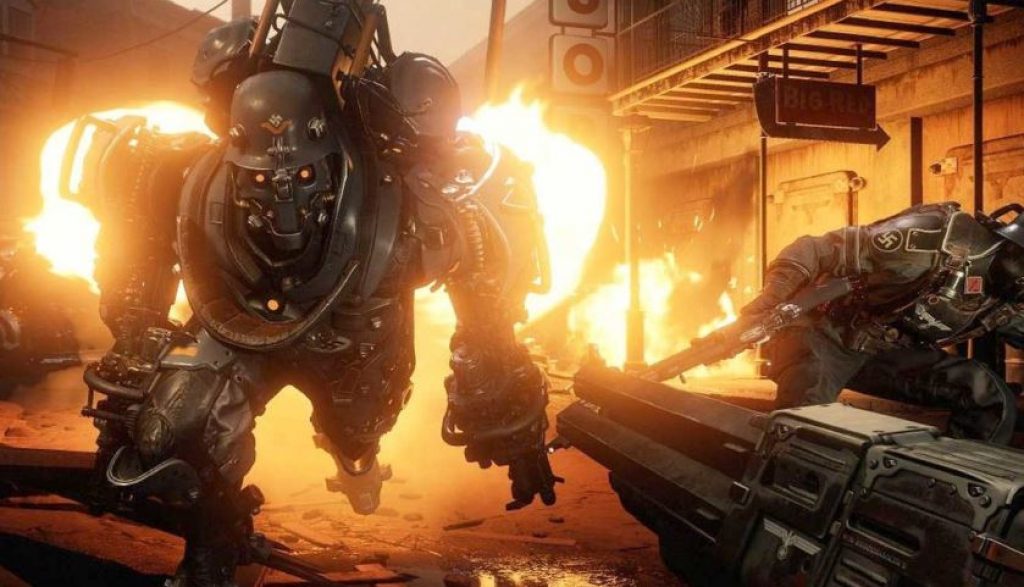 While this ends in the handful of missions you’re being broadcast on, Cyberpilot offers nothing new or exciting to say about this alternative perspective on the resistance. The only other characters are your resistance fighters, who occasionally engage in quirky banter with each other. Still, beyond that, you are nothing but a resource to them, and disappointingly, you don’t get any new insights into Wolfenstein’s world.

These short gaps between missions also introduce you intimately to each new steerable machine. Before you can control them remotely, you have to work your way around their security, which Cyberpilot says is far more complicated than it is. While you get descriptions of intricate wiring and defensive subroutines, use only motion controls to remove a chip from the machine in question, plug it into a nearby monitor, and replace it after a short break.

Taking a closer look at the details of each chillingly monstrous Nazi machine, in VR, without fear of death is surprisingly fascinating; however, there’s not much else to do during these scenes. That makes each of these forced interludes feel redundant and unnecessary. Cyberpilot can be played with the PlayStation Move controllers or a DualShock 4, and neither is great. With a DualShock 4, the fight feels more familiar. You use the thumbsticks to move and rotate freely while using motion control to aim.

In this configuration, your two hands move as one, making activities outside of combat a daunting task. The PlayStation camera can only track the DualShock 4’s forward-facing light, so in some cases, it’s impossible to reach for objects on either side of you. Using the Move controllers instantly changes that and also gives you more freedom in combat. By moving your arms independently, you can bash on your select attack button and heal at the same time, which is impossible if you are stuck together by a seemingly invisible set of handcuffs. 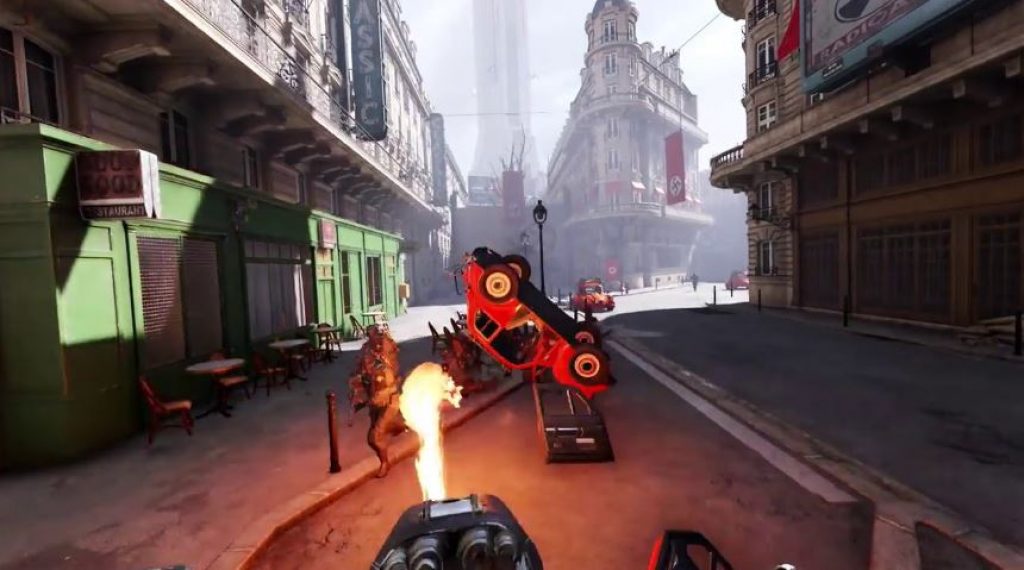 As a trade-off, movement is more difficult with the Move controllers. The rotation is assigned to face buttons while the sideways movement is controlled using the large, mushy PlayStation button on the front of the controller. It’s much less ideal than the DualShock 4, giving you a choice between the lesser of two evils. You also won’t have much time to adjust, as Cyberpilot’s four missions can be efficiently completed in less than 90 minutes.

Apart from reaching the flat end, there is nothing else to do to make the time you have more attractive. There are no collectibles to find, alternate mission routes to explore, or exciting mission sets to replay for its thrills. It gives Cyberpilot a definite technical demo feeling; as VR games have become more adept at using the hardware in unique ways, Cyberpilot feels outdated as a result.

There’s no reason to dive into Cyberpilot if you’re looking for another way to explore more of Wolfenstein’s world. This straightforward shooter lacks the punch to make his action exciting and breaks off the fight with even more repetitive and slower interludes, with motion controls taking the bare minimum to accomplish mundane and straightforward repair tasks. Other than being striking for a VR game in some places, there’s nothing about Cyberpilot that justifies your time.

Wolfenstein has managed to captivate with his strong characters and intriguing world construction, giving you a glimpse into a different future where the rules are being rewritten, and all-new terrifying opportunities await to be discovered.