People were very interested and were encouraged to use DLSS (Tensor) and to be able to play Battlefield V in a hybrid way. NVIDIA has launched major viruses on the Internet for media coverage. But all of this exploded as end-users turned their eyes away when they discovered the very high price level. There is no more critical audience than a PC player, and when they have to pay a lot of money for visual differences that are often difficult to spot and cost a lot of SPF, you can bet that it can to turn around. 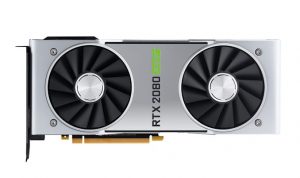 Nevertheless, NVIDIA chose a direction which, in my opinion, was the right way to go and one thing they could not back down. So, what to do in meantime to convince the PC player concerned about his budget? Well, with the help of the RT and the GTX 1650, 1660 and 1660 Ti without tensor, NVIDIA has again turned the nose of many players in the right direction. The NVIDIA GeForce RTX 20 Superseries was the company’s response to AMD’s new video cards. Combining a mid-level kicker and product stack realignment to compete with AMD, Super cards have given NVIDIA’s product line a modest performance boost on almost every level. After launching the first two cards of this sub-series earlier this month with the NVIDIA GeForce RTX 2070 Super and the GeForce RTX 2060 Super, NVIDIA is back to start the latest (?) Super cards: the GeForce RTX 2080 Super announced previously.

For starters, the 2080 Super is the first fully-featured TU104 graphics processor with all 3072 CUDA cores to be launched in the consumer space, an increase of 128 centers compared to the standard RTX 2080, which offers a slight improvement in performance. Calculations, helped by a small rise to boost the clock. Its memory data rate has also been increased from 14 Gbps to 15.5 Gbps, providing a corresponding increase in memory bandwidth from 448 GB/s to 496 GB/s – and in our tests, it’s only the beginning of the increase in memory bandwidth possible with this card. All these changes result in a slightly higher TDP for the 2080 Super, rated at 250 W compared to 215 W of the original 2080. With 64 units ROP and 192 units of texture, the result will not be left behind. It has a clock boost 1815 MHz for the version of the founder.

This card has also been equipped with an even faster GDDR6 memory of 15.5 Gbps, including 8 GB. This card will receive a TDP of 250 watts. This product (founders edition) will be priced at $ 699. The card offers an HDMI port, three DisplayPorts, and a Virtual Link (USB) connector. In addition to the 128 additional shader processors, GDDR6 memory runs at 15.5 Gbps. The penalty for this is that the 250W TDP RTX 2080 Super replaces the 215W TDP RTX 2080. This is the same TDP as the GeForce RTX 2080 Ti, even faster. So it’s easy to see where is this going: NVIDIA is improving its overall performance, at the cost of some energy efficiency.

As we will see in our benchmarks, the situation is a bit more complicated than that, but not immensely. Perhaps the craziest factor here is that, unlike the RTX 2080 Ti, the RTX 2080 has trouble filling its 250 W TDP; NVIDIA strengthened the TDP to ensure that the card had sufficient power reserve for the highest clocks, and they succeeded. As a result, the card runs at full speed far more than the original 2080, or indeed the 2080 Ti or the 2070 Super. The most interesting changes with RTX 2080 Super is not even the GPU, but instead what NVIDIA does to feed the beast on the memory side. Since the launch, a year ago, the first video cards equipped with GDDR6 technology, each card comes with a memory of 14 Gbps (or less). 14 Gbps was the fastest speed level available at launch by major memory providers, but it was not the quickest speed level on the roadmap. The 16 Gbps memory is also under study and, with the launch of the new NVIDIA card, we get our first card with this memory.

For the launch of new graphics cards, NVIDIA has exploited Samsung’s new 16Gbps, 8Gbit chips for these new cards. With 256-bit memory bus for the card itself, the RTX 2080 Super is kept at the same 8GB capacity of VRAM as the original RTX 2080, but the card has more bandwidth. However, in a rare move for NVIDIA, they are a bit conservative on memory clocks – the RTX 2080 Super only works at 15.5 Gbps instead of the 16 Gbps memory capacity. According to NVIDIA, this ultimately comes down to their decision to simplify as much as possible the upgrade of Super Card manufacturing, spacing them so that partners (including themselves) can use the same cards and chillers. of their RTX 2080 vanilla cards. As a result, the GeForce RTX 2080 Super is built on a circuit board designed and qualified for GDDR6 at 14 Gbps. To be sure, I clocked our card at 16 Gbps quickly and without any problem; but our stability standards are not as high as those of NVIDIA (not to mention the issues of mass production). So, for the curious overclockers, there’s a bit more memory to play with, with the usual warnings about overclocking. Because of this and the higher TDP, the RTX 2080 Super tends to be more strongly related to the GPU than most NVIDIA cards. Higher memory speeds more than offset the performance of the fully enabled GPU and its higher clock speeds. While no graphics processor has available memory bandwidth, the RTX 2080 Super is pretty well powered. It also means that overclocking will be a little more one-dimensional, GPU clock speeds being the most critical factor.

As far as AMD cards are concerned, technically AMD’s closest competition is the Radeon VII, which was surprised last January. The card typically offers similar performance to that of RTX 2080 for $699. However, even before the launch of today’s RTX 2080 Super, he may have been stillborn in mainstream games and PC games – he did nothing better than the RTX 2080 – and the RTX 2080 Super puts the last nail in this coffin. The new Radeon RX 5700 XT based on Navi, is much more enjoyable at a fraction of the price. This is not a competitor of the RTX 2080 Super, but a spoiler even more massive than the RTX 2070 Super, offering incredible performance for $300 less.