After launching a single smartphone each year during its early years, OnePlus has evolved to the point where, like other smartphone brands, it now offers several phones each year. This is a big upgrade when compared to the OnePlus 7. It is similar to the OnePlus 7 Pro in a smaller format and without curved screen sides.

Those who want a compact 7 Pro now have an option that lies between the two existing phones, offering more opportunities to users at different prices. Compared to OnePlus 7, the OnePlus 7T comes with two critical improvements: an improved display and better cameras.

It retains the practical form factor of OnePlus 7 and presents a new, immediately recognizable bottom design. A faster upgrade and increased performance with the latest Snapdragon 855 Plus chipset are additional enhancements. 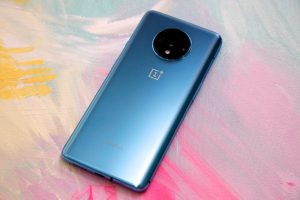 Designwise, OnePlus has retained and modified some features of the OnePlus 7T. Although the handset looks like the OnePlus 7. Although it has the same notch for the water drop and a flat-screen as the OnePlus 7, the matte frosted glass back panel of the Glacier Blue color variant looks like to that of OnePlus 7 Pro. The most significant change, though, is the incorporation of a circular camera at the back.

Last year, OnePlus opted for the vertical camera configuration for dual sensors and chose to stick to the same design for the OnePlus 7 Pro triple camera setup launched earlier this year. Now, the company has opted for a radical design change with a model “T” handset – something that OnePlus does not usually do with its handsets, a practice that it has refrained from the T-series.

The center of the smartphone and, although it is very prominent, does not oscillate the device because of its location or size. The camera module contains three sensors, as well as the LED flash. Apart from that, the OnePlus logo appears in the center and the branding at the bottom.

Moving to the sides, the left edge of the device contains the volume rocker keys. The power button and volume slider are on the right corner. The lower edge has a USB-C port and a dual SIM card tray. Yes, OnePlus’s expandable storage is still not supported, just as it skips the 3.5mm plug. 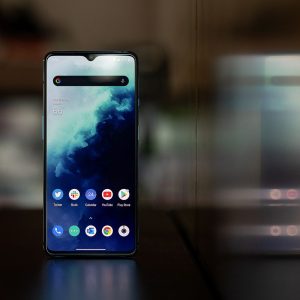 The OnePlus 7T display is a significant upgrade from the OnePlus seven display. On paper, it is comparable to the 7 Pro, although attributes such as size, resolution, and quality of the screen are slightly different. This is a 6.55-inch Full HD + AMOLED display with thinner packages, a 10+ HDR display, and a 90Hz refresh rate. The OnePlus 7 Pro has a larger 6.67-inch QHD + screen, while the OnePlus 7 has a smaller 6.41-inch FHD + display.

The benefits of 90Hz display become apparent as you navigate through the user interface and when you play, while HDR 10+ compatibility dramatically improves video content. The 7T uses a new E3 material that would reduce harmful blue light by 42% without compromising colors. Video display settings adjust brightness and contrast when playing a video. Such jargon aside, we found the screen impressive.

It’s not as rich and immersive as the Q Pro’s 7HD + display, but it’s because you do not have the curved edges that make it a genuinely gapless front, at least on the sides, and at because of the lower resolution here. The 7T screen is excellent for watching movies and TV shows and for playing games. Our favorite function is very smooth scrolling. Also, with a brightness of 1000 nits, the screen is beautiful, bright, and relatively easy to read, even in the sun. 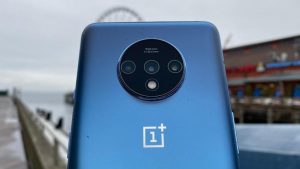 The biggest change has arrived at the back. OnePlus has increased the number of camera sensors from two to three. That means you get a triple-sensor rear camera that combines the same 48-megapixel Sony sensor as the OnePlus 7 with a 12-megapixel telephoto lens and an ultra-fast 16-megapixel camera.

OnePlus has never been The Best in camera technology, but I must applaud the gradual progress it has made to improve the photography of its phones from generation to generation. This remains the case with OnePlus 7T, which is another decisive step in the right direction. The triple sensor does not match the image quality of the more expensive competing phones such as the Huawei P30 Pro but is more than enough for most users.

The most significant improvements are in the performance of the camera in low light conditions and macro shooting. Nightscape mode is installed immediately. It allows the OnePlus 7T to take remarkably better photos in low light than the original 7 when it was launched.

The three-sensor configuration also allows you to take wide-angle shots, which is ideal for nature scenes and holiday shots. Portrait mode is functional and sufficient for social media. Video recording is excellent with the addition of Optical Image Stabilization (OIS) and Electronic Image Stabilization (EIS), although the audio quality is a problem in windy areas. 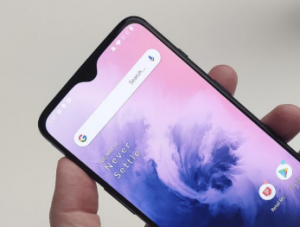 OnePlus also slightly increased the 3700mAh battery from OnePlus 7 to 3800mAh from OnePlus 7 Pro. He also introduced Warp Charge 30T, supposed to recharge the handset from zero to 70% in just 30 mins and during our test, he managed to extract 65% during the same period as we mentioned above, which is quite close to the claim time.

Depending on the usage that differs from moderate to secure, you can use a full day or longer without using the charger every few hours. The good thing about fast charging is that even if you’ve to plug it in, you can be sure that a charging time of 5 to 10 minutes will cover you for at least the next two hours. OnePlus is continuing to provide one for the Best battery experiences on the market. 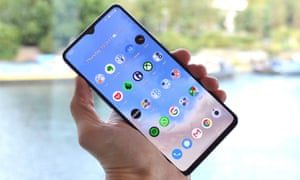 It is a 7-nm octa-core chipset with a clock speed of up to 2.96 GHz and support for Qualcomm AI Engine. For an average smartphone user, the difference is not going to be obvious, but rest assured that you get The Best processor for an Android handset with the OnePlus 7T. You also get it only in an 8GB RAM model, but you have two choices in terms of storage: 128GB and 256GB. Both are UFS 3.0 storage, which further improves speed.

There have been no complaints about the day-to-day operation of the handset. The handset acts quickly on your commands, whether to open applications, switch between them, browse the Internet for hours with various applications running in the background. 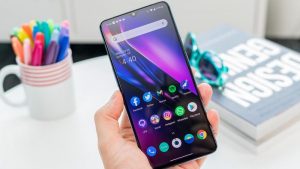 The 7T is the first phone to be equipped with the Android 10. It runs the new version 10.0 of OxygenOS in addition to the latest operating system of Google. This skin, as we know it, is cosmetically different from the Android stock, but follows the same principles. It is light, clean, and pleasing to the eye.

This is our favorite Android skin on all brands. This is due to the fluidity it offers when navigating the interface. With Android 10, it also sweeps the left or right edge of the screen to go back and a lower navigation bar to switch between recent applications. Although we are not used to using these gestures on Android, it seems that navigation has accelerated after a point.

The new customization feature allows you to select the shape of the icons between round, square, drip, and rectangle. Also, there is a setting under Messages that will enable you to enter specific keywords to block spam SMS. What we like about OxygenOS is that it is free of unnecessary clutter, while allowing a sufficient number of customizations to keep the atmosphere of Android.

With the OnePlus 7T, the company has made the OnePlus 7 Pro more accessible to consumers. This is The Best “T” upgrade of all OnePlus phones to date and a desirable proposition for those who find out the OnePlus 7 Pro too large. The display is excellent, and the performance is just as good as the 7 Pro – and the fast loading speed is even faster.

The only disadvantage, compared to the 7 Pro, is that you miss this curved QHD + screen and the contextual selfie camera. At $ 599 ($ 37,999 in India), 7T does not face much competition with the overall package it offers. In the meantime, users in India may consider the ROG Phone II 8GB variant at the same price. If you’re looking for a high-quality widescreen Android phone at this price, the 7T is a great choice. But OnePlus has to decide what the phone is: an affordable premium model or a star killer.