Compsmag is supported by its audience. When you buy through links on our website, we may earn an affiliate commission fee. Learn more
Reviews » Acer Aspire VX 15 Review
Reviews

Acer Aspire VX 15 Review: If you are looking for a laptop for less than $1,000, and on which you can play your favorite games at 1080p resolution. There is one for you. The Acer Aspire VX 15 (examined at its starting price of $799.99) is a budget gaming laptop that comes with a Nvidia’s GeForce GTX 1050 GPU and an Intel’s Core i5-7300HQ CPU. This beautiful, 15-inch gaming notebook by Acer also features a snappy keyboard, correct audio output and excellent performance for the money, but you have to compromise on display quality and internal storage. 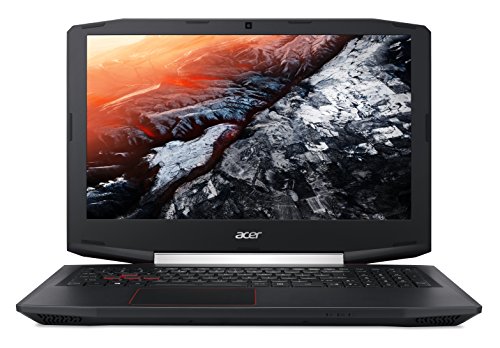 Though I typically find the red-and-black color scheme on gaming notebook to be a bit old fashioned, the Acer Aspire VX 15’s look is subtle enough that I find it beautiful. The lid is made of plastic with a brushed aluminum pattern and features Acer’s emblem in silver and two red stripes. The hinge reads “Aspire VX” and is flanked by two red vents that would look at home on a Transformer.

As I lifted the lid, I discovered the 15.6-inch, 1080p (Full-HD) display; an island-style keyboard with a complete number pad; and the touchpad. There are more red trimmings here, including the A, S, D, and W keys as well as the border of the touchpad.

Coming to the ports, the left side of the laptop houses a lock slot, an SD card reader, a USB 2.0 port, and a combination headphone/microphone jack. On the right side, you will find a USB Type-C 3.1 port, an HDMI output port, a pair of USB 3.0 ports, and an Ethernet jack.

The Aspire VX 15’s keyboard is responsive and quite comfortable. With its 1.6 millimeters of the key journey and 65 grams of actuation force needed to press the keys, I discovered that the red backlit keys (unfortunately no RGB here) struck a firm balance that made sure I don’t bottom out. I reached 100 words per minute with my usual error rate of 2 % on 10fastfingers.com typing test.

The 4.1 x 3-inch touchpad is very smooth and responsive, and it works fine with Windows 10 gestures. Along with the pinching-to-zoom and two-finger scrolling, I effectively switched between apps with three finger swipes and opened the Windows Action Center with the four-finger tap.

The Acer Aspire VX 15’s 15.6-inch, 1080p (Full-HD) screen is sharp, but its colors are dull and lifeless. While I watched the trailer for Wonder Woman, the sky and seas of The myscira did not appear as two distinct, bright shades of blue, but rather one pale shade of cyan. And the green grass that Diana tramples as she trains is sharp didn’t look vibrant and full of life.

When I played the Battlefield 1, the rocks were sharp, and I could see the sparks originating from fires and pistols. However, the scene was somewhat darker than the original. The Aspire’s panel reproduces just 65 % of the sRGB color gamut, falling way behind the 96-% sRGB category average. That’s a worse range than on the Dell Inspiron dull display (67 %), but the Asus ROG Strix was far superior (122 %).

The display’s colors are not accurate, either. The Acer Aspire got a Delta-E rating of 6.8 in our testing (closer to 0 is good). While the Dell Inspiron was worst (12). Also, the Acer Aspire scored much poorer than the category average (2.4) and the Asus ROG Strix (1.6). To top it all off, the Acer Aspire’s screen is relatively dim as it measured just 247 nits on our light meter. That’s lower than the category average (271 nits), the  Dell Inspiron (253 nits) and the ROG Strix (269 nits).

The Aspire rocks a Nvidia’s GTX 1050 GPU with 4GB VRAM, which is enough to play your favorite games at 1080p resolution, though not on the extreme settings (also not in VR mode). As I fired up Battlefield 1 and storm the Gallipoli at max settings between 33fps and 43 fps. When I drove the settings down to med, I reached a more consistent 57 fps to 60 fps.

On our budget gaming test, we played the Rise of the Tomb Raider at maximum settings with SMAA anti-aliasing at 1080p Full-HD resolution, the Acer Aspire reached 43 fps, surpassing the Asus ROG Strix and the mainstream notebook category average (both 38 fps).

However, when we ran our typical Rise of the Tomb Raider test, the Acer Aspire choked at just 16 fps, which is considered as unplayable. The Dell Inspiron (22 fps) and the ROG Strix (18 fps) weren’t much better too. The category average is 32 fps, though that includes laptops with stronger GPUs. (Both the Asus ROG Strix and the Dell Inspiron also have Nvidia GTX 1050 GPUs.)

After listening to the White Rabbits’ “Percussion Gun” on the Aspire VX 15, the drummers nearly reached out and punched me in the face. The speakers on the laptop are surprisingly powerful and sensibly-balanced. The song’s namesake impact is loud and strong, while the vocals, keys and rhythmic hand claps were all equally clear and loud. It easily crammed our small conference hall with its sound.

When I played the Battlefield 1, I could clearly hear the thudding sounds of cannonballs landing on the beach as my fellow soldiers shouted over the chaos. Despite all of that, I could still make out the orchestrated music in the background.

Being Armed with a 2.5-GHz Intel’s Core i5-7300HQ CPU, 8GB RAM, and a 256GB SSD storage drive, the Acer Aspire VX 15 is no slouch when it comes to delivering performance. I had over 40 tabs open in Google Chrome, out of which one was streaming a Full-HD video on YouTube, and I effectively switched between the tabs and didn’t experience any lag at all.

It took the Acer Aspire 3 hours and 39 seconds to pair 20,000 names and addresses in our OpenOffice Spreadsheet Macro test. Both the Dell’s Inspiron (3:37) and the Asus’ ROG Strix (3:31) were a bit faster, but all three were faster than the mainstream notebook category average (4:15).

For a gaming notebook, the Acer Aspire VX 15 has solid battery life. The laptop lasted 7 hours and 8 minutes on our Battery Test, which involves continuous web surfing over Wi-Fi. The mainstream notebook category average is a slightly lower 6:59. The Asus ROG Strix fell far short (3:41), but the Dell Inspiron had far better battery endurance (11:23).

During regular use, the Acer Aspire VX 15 stayed nice and cool throughout our testing. After we had streamed a Full-HD video from YouTube for 15 minutes, the Acer Aspire measured 94 degrees Fahrenheit on the underside, while the area between the G and H keys measured 88 degrees, and finally, the touchpad registered 79 degrees. But when I started playing Battlefield 1, the laptop started heating up quickly. As I battled to take the alleys of Gallipoli, the bottom clinched to a hot 111 degrees, and the middle of the keyboard measured 105.5 degrees. However, the touchpad stayed relatively cool, at 81.5 degrees.

There are two options at $1,050. The first is the same as our $1,000 model, except it swaps out the Nvidia’s GTX 1050 for the more powerful Nvidia’s GTX 1050 Ti. You’ll get better graphics, however, will still have limited storage. The other alternative at this price uses the regular Nvidia’s GTX 1050 and includes a 1TB HDD storage. Though it’s not as fast as an SSD storage, and you’ll be able to install far more games straight out of the box.

The Acer Aspire VX 15 is an actual solid budget gaming notebook despite its relatively low price of $800. However, the corners it cut to get to that price are considerably annoying. The display is dull, and the re’s not enough room to carry a lot of games until you get to a more expensive configuration. However, it lasts long when we consider a gaming notebook, has a comfy keyboard and even looks beautiful.

If you have more money to spend, consider the $1,099 Asus’ ROG Strix GL553VD, which has a better display and better storage options, and comes with a faster processor, although the speakers and battery life aren’t as good.

The Dell’s Inspiron 15 7000 also comes with a starting price of $799, lasts much longer on a single charge and has more configuration options, but its display is even poorer than the Acer Aspire’s. But overall, the Acer Aspire VX 15 is a reliable choice if you need a gaming notebook and can’t manage to spend more than $1,000.

Spades Free – For iPhone and iPad: Review And Features

Aruba To Go for iPhone: Review And Features

Live Wallpapers for Me: Review And Features

What is the difference between Android and Windows OS