Compsmag is supported by its audience. When you buy through links on our website, we may earn an affiliate commission fee. Learn more
Home » Reviews » Acer Spin 7 Review
Reviews

Acer has launched an ultrabook called Acer Spin 7, which is a 2 in the device with a 360-degree convertible hinge and can be utilized as a laptop as well as a tablet. It weighs just 1.2 kgs and is one of the thinnest convertible laptops at simply 10.98mm, simply 0.10mm thicker than the Acer Swift 7. It comes with an aluminum unibody housing and runs Windows 10 Home OS. 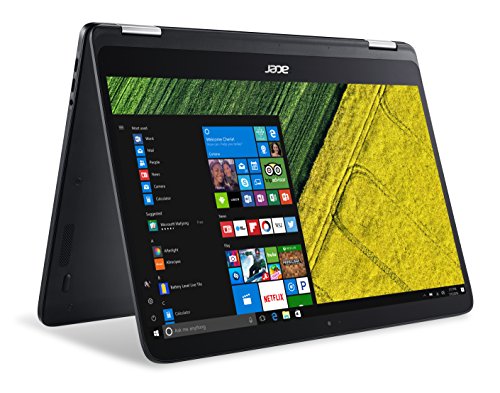 Acer has a 14-inch screen in a 13-inch chassis and an aluminum body. As well as, the display is extra protected against scratches by Corning Gorilla Glass. The Acer Spin 7 is only accessible in black color and has the great advantage that it is extremely thin with practically 1.1 centimeters. The weight of the convertible is 1.2 kg, and the exact dimensions are 324.6 x 229.6 x 10.98 millimeters. Acer Spin 7 is a convertible; it has a hinge which permits the screen to rotate 360 degrees.

The Acer Spin 7’s keyboard is surprisingly useful. It has above-average travel for its class of machine, with a good springy feel that doesn’t bottom out uncomfortably. Key spacing is excellent, and there aren’t any keys that are particularly small or oddly spaced. It’s also comparatively quiet.

The glass trackpad looks comically large at first, but it’s ultimately an excellent navigational tool. It’s easy, comfortable and, accurate. It immediately responded to gestures like swiping with three fingers to hide windows and scrolling with two fingers.

The Acer Spin 7 comes with a 14-inch full-HD display with the resolution of 1920 * 1080 pixels. The screen comes with corning gorilla glass safety. According to the company, the display is powered by Colour Intelligence software which dynamically adjusts saturation in real time. It also comes with BlueLightShield to protect eyes from harmful screen emissions. Because the name implies, it can be rotated as much as 360 degrees in any direction.

The speakers on the Acer Spin 7 are surprisingly clear for a laptop of this size. However, I want the sound had been a little louder. It’s fairly obvious that the Acer Spin 7 doesn’t have a dedicated video card. That comes with an integrated Intel HD Graphics 610 model. I can’t see anybody enjoying gaming on this laptop, as there are different, less expensive oriented notebooks out the re. And also, it will play HD and 4K content only beautiful and can work wonders for light to moderate photo editing jobs, drawings and so on.

The Acer Spin 7 SP714-51-M4YD is powered by a state-of-the-art Intel Core i7-7Y75 processor. This newly launched dual-core CPU has a base clock speed of 1.3 GHz that goes as much as 3.6 GHz when in the turbo, 4 megabytes of cache and a thermal design energy of simply 4.5 Watts. It’s a perfect processing unit for ultrathin, ultraportable devices of today, built with power performance in mind first and foremost. It’s similar to an Intel Core i5 mobile processor while it comes to actual efficiency. It simply uses way less juice than an i5.

Storage space is limited to 256 gigabytes. And when I say limited, I simply physically limited, as the re’s no way of upgrading the onboard Solid-State Drive either. Still, the 256 gigs should prove enough for your travel wants, however, I’d recommend buying an external hard drive or some cloud storage wherever you want to maintain extensive media collections.

The most important feature this laptop has going are the battery life. A full charge of its 4-cell, 2770 mAh Li-Ion battery pack, will last for as much as 8 hours of moderate use. Sufficient for a day’s work, it falls quickly when traveling long distances. That is a somewhat forgivable downside, considering the large touchscreen and skinny body.

If the Acer Spin 7 had been a few hundred less costly than we’d say it’s a nice choice compared to different thin and light-weight 2-in-1 machines. However, at its $1,250 retail price, it’s a hard sell compared to devices like the Lenovo Yoga 910 and HP Spectre x360.

All, I believe the Acer Spin 7 is a fantastic 2-in-1 convertible laptop, if not one for the Best to be launched in current months. It’s a highly useful piece of cellular computing with attractive design, expansive features, and excellent portability stats.  As well as, the Spin 7, for all its thinness, is a pleasure to carry and use. It feels like a quality machine and has an excellent keyboard and touchpad — if you will get used to the touchpad’s sheer size. That is a tool that you can toss into your backpack and hardly feel its weight.

I hope you like The Article “Acer Spin 7 Review” Keep Tuned For More Updates.