Asus is back for Part 3 with the ROG Strix Scar III, and the new version is just as badass as its predecessor. For $1,799, you get a powerful RTX 2060 GPU wrapped in a chassis with a smooth 15.6-inch, 240-Hz panel, a comfortable keyboard, and a cool ROG Keystone. However, that chassis is a little thick, and the re’s no webcam insight. But to top it all off, the Strix Scar III has a good battery life and a pair of reliable speakers, making it one of the best gaming laptops around. This is our Asus ROG Strix Scar 3 Review. 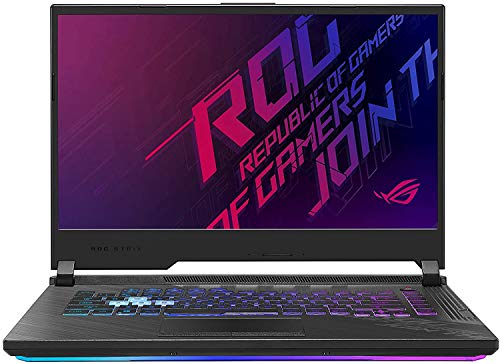 The grey hood of the Strix Scar III has a brushed faux-aluminum design, so that the lines converge close to the center, with half of the hood being brushed diagonally and the other half having a vertical gradient. The lid has a ROG logo with RGB lighting, and underneath there is a recess in the middle that reveals the deck. Outside, the hinge protrudes with a pair of copper openings around the extra gates.

Before I even opened the machine, I was greeted by an RGB lightbar wrapped around the chassis. When you unfold the lid, you see a carbon fiber deck with a similar futuristic style, but in black and grey. The keyboard is a decent size, with special media keys just above the keyboard, while the touchpad also acts as a Numpad. The orange ROG Keystone is also visible on the right side. The display has overhead edges at the top and sides, although no webcam can be found.

Although the Strix Scar III has quite a few ports, it does not have a Mini DisplayPort, which makes setting up VR a bit confusing. The left side of the system has three USB 3.1 Type-A ports and a headphone jack, while the backside provides power, a USB Type-C DisplayPort 1.4 port, an HDMI 2.0B port, and an RJ45 port. To the right is the ROG Keystone, a magnetic, coded key with information such as custom lighting effects for the laptop. It can also unlock a piece of storage space locked on your hard drive. To activate this “Shadow Drive,” you need to create an Asus account.

Each click of the Strix Scar III’s keys felt smooth and bounced enough for a satisfying feeling. It was super comfortable to use while typing or gaming, thanks to the carbon fiber palm rest. The key travel seemed OK, but the amount of weight needed to press the keys was what made typing feel great on them. The keys are individually RGB-lit, and you can adjust the illumination in the Aura Sync tab of the Armoury Crate app.

There are presets such as Rainbow and Breathing, but if you want to turn the lights off completely, you will need to download another app called Aura Creator from Microsoft Store. However, adjusting the lighting using that app proved too complicated, as Aura Creator functioned more like video editing software.

The 4.1 x 2.8-inch touchpad is relatively soft, offers two discreet clickers, and also serves as a digital Numpad, so it’s quite fun. This pad also responds well to Windows 10 gestures such as two-finger scrolling and three-finger tabbing thanks to the Windows precision drivers.

The Strix Scar III’s 15.6-inch, 1920 x 1080 display is pretty bright and colorful, but most importantly, it has a smooth 240-Hz refresh rate with a response time of 3 milliseconds. In the Morbius trailer, the titular character evoked a ball that gave a bright red light on the display of the Strix Scar III. In the cave where Morbius was arguing with a bunch of bats, I could see the contours and most of the details of the dark walls. The panel was sharp enough to reveal the pores on Adria Arjona’s face.

The brown feathers sticking out of Eltariel’s shoulder pads were brave and sharp as I walked along the dirt roads of Middle-earth: Shadow of war. I stepped into a dimly lit cave and found my prey, a rat; I followed him, nailed him with an arrow, and took in the picturesque scene of his corpse on the steps (malicious laughter). Despite the lack of light, I could see the details in the mossy stone steps.

There are speakers on either side of the Strix Scar III. This machine is not top-firing, but fortunately, it’s not bottom-firing either, and the audio was pretty solid. The bass players that open Low Roar’s “I’ll Keep Coming” were a bit low, but still stable. The lead vocals, as well as the backing vocals, sounded full and bright. But part of the percussion in the middle of the song lacked impact. However, I could distinguish between the instruments I heard towards the end of the song when they all came together.

In Shadow of War, I stuck a sword straight into the spine of an orc, and the sharp stabbing sound, followed by the cut of its bones, was pleasantly loud. The speakers provided enough bass to give Celebrimbor’s magical abilities the amount of oomph they deserved when I pressed the orcs with my character’s polearm or hammer. Eltariel’s voice was evident when she growled or screamed as I rolled around a pack of caragors.

Asus offers the Sonic Studio III audio app, which gives you presets for Music, Gaming, Movies, and Communication. Music sounded best for both music and gaming. There are adjustable settings in the presets for Smart Volume, Voice Clarity, Bass Boost, Treble Boost, Reverb, and Upmix/Surround. You can also apply different presets to specific apps, so you don’t have to adjust your audio when switching between music, gaming, and movies.

Under the hood of the Strix Scar III is an Nvidia GeForce RTX 2060 GPU with 6GB of VRAM that hit back and forth with the hammer of Celebrimbor at 77 frames per second through Shadow of War on Ultra, 1080p, until the creature was cold on the ground. On the Shadow of the Tomb Raider benchmark (Highest, 1080p), the Strix Scar III nailed 55 frames per second, beating the 47-fps mainstream gaming laptop average.

In the Grand The ft Auto V test (Very High, 1080p), the Strix Scar III got 64 fps, beating the mainstream gaming laptop average (58 fps), but fell short of the 66 fps mark of the Dell G7 15 and Zephyrus M. The Strix Scar III scored a 10.3 out of 11 in the SteamVR Performance Test, exceeding the 9.1 category average. However, the Asus could not match the perfect 11 of the Dell G7 15.

Stacked with an Intel Core i7-9750H processor and 16GB of RAM, the Asus ROG Strix Scar III juggled 40 Google Chrome tabs, five 1080p YouTube videos, and Spotify without missing a beat, while Shadow of War ran in the background. In the Geekbench 4.3 overall performance test, the Strix Scar III scored 23,196, sliding past the average of 20,284 mainstream gaming laptop tops. Asus’ machine slowed down against the Dell G7 15 (23,863), but it did beat the Zephyrus M (19,428), and they both have the same CPU as the Strix Scar III.

Thanks to the plastic chassis of the Strix Scar III, the heat was easy to control. After I had played 15 minutes in Shadow of War, the underside hit 109 degrees Fahrenheit, which is just over our comfort threshold of 95 degrees. The center of the keyboard and mouse hit 103 and 83 degrees, respectively. The hottest the machine got was 130 degrees Fahrenheit at the bottom by the vents, but even that didn’t feel very hot – just warm.

On our regular heat test, which streamed a 15-minute, 1080p video, the bottom reached 91 degrees, the keyboard touched 86 degrees, and the touchpad reached 78 degrees.

The Asus ROG Strix Scar III is an impressive gaming laptop with strong performance, a 240-Hz panel, a long battery life, a clickable keyboard, and decent speakers. Please note, however, that this machine lacks a webcam, and the chassis is a bit thick. If you’re put off by the missing webcam and chassis, take a look at the Dell G7 15, which has a similar price and offers a thinner chassis, stronger performance, brighter display, and a webcam in the right place.

But overall, the Asus ROG Strix Scar III is one of the best gaming laptops you can buy now.