When you think of gaming laptops, most people view large, bulky machines. Well, that will change with Asus’ ROG Zephyrus M, a gaming laptop weighing just 1.9kg and only 18.9mm thick. The Taiwanese computer manufacturer wants gaming notebooks to be as thin and light as conventional computers, and ROG Zephyrus is the first step in that direction.

Finally, there is a laptop portable enough to easily fit in all the bags and backpacks of my computer, and that does not seem to me to be a burden to wear. Zephyrus M offers a compelling set of materials and a fresh design that allows you to maintain the balance between work and play. 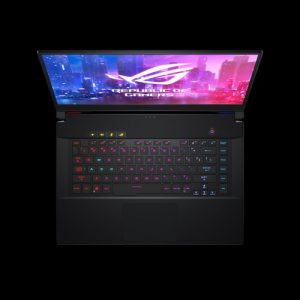 Asus claims that the ROG Zephyrus M GU502 is 45% lighter and 25% thinner than conventional 15-inch laptops and it shows. It measures 18.9 mm at the thickest point and weighs 1.9 kg. The reinforced magnesium alloy frame gives a steady hand and a brushed finish to the lid, while the area around the keyboard and trackpad has a matte finish.

The trackpad features a honeycomb design underneath that helps prevent extra flex and is covered with a layer of soft-touch paint. RGB lighting enhances the game’s aesthetic. Available in black, the notebook featured soft-touch plastic on the keyboard deck and brushed metal design on the lid. Of course, a ROG logo engraved in metallic gray, which shines with RGB color, is visible on the back.

As expected, the laptop is rugged and well built. The good thing about the ROG Zephyrus M is that it has a conventional design and looks attractive whether it’s open or closed. The thin contours surrounding the top and side edges of the screen give the laptop a sense of modernity, even if the bottom bezel is enormous. If you are wondering where the web camera is placed, it does not exist. Seriously, Asus? Of course, you can buy a web camera separately. 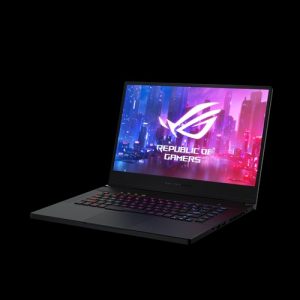 The colors did not look too saturated or faded. Thanks to the high refresh rate, things are going well on the Zephyrus M. Even outside games, general animations, scrolling, everything goes well on this screen, and I like it a lot. The response time of 3 ms may not be as important for regular users, but for gamers, it is decent response time.

Regarding the input/output ports, the Zephyrus M does not leave you wanting. It features USB3.1 Type-C, Gigabit Ethernet RJ45, USB3.1 Type-A, HDMI 2.0b, and Kensington lock, as well as two USB3.1 Type -A and two 3.5mm audio jacks for headphones and microphone. The laptop comes with a 76Wh rechargeable Li-ion battery that, according to Asus, can last up to 6 hours in web browsing. However, we found that the distance traveled on the Web, listening to music, typing, and sometimes playing videos on YouTube was just under 4 hours.

The performance of the battery is one of the significant drawbacks of the Zephyrus M GU502 notebook, and it could have been much better. Manufacturers must find a suitable battery solution to offer much better performance in this department because it hinders portability, which is very original for this range. The laptop has a nifty little feature, USB Type-C Power Delivery that allows the user to charge the laptop via a power bank in case of lower power supply less than 10%. 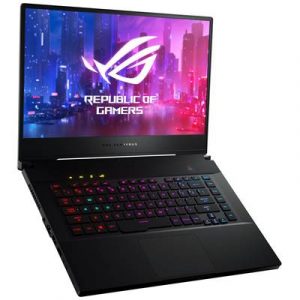 The Zephyrus M GU502GU has impressive features: a first-generation Core i7 processor, 16GB of RAM, a 512GB SSD and an Nvidia GTX1660 Ti graphics processor. All this gives an incredible performance. Regular tasks are nothing for this laptop. You can do multiple tasks as you please, open a tabbed load on Chrome (I was almost 25-30 open all the time), and even run an instance of Photoshop at the same time, and this laptop will not crack.

It’s super. This is what is expected of a laptop that costs as much as this one, but it is a gaming laptop. The most crucial measure for judging its performance is, therefore, its ability to handle games. Well, I played many games on the Zephyrus M GU502GU, including Unreal Tournament, Far Cry 5 and, of course, PUBG, and the laptop handles all these games very well. 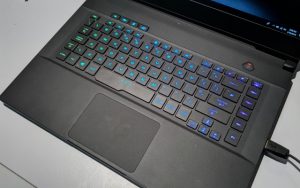 The keyboard is an another aspect shared between the Zephyrus M and S ranges, with a reasonably good layout and quick and user-friendly returns. The main deck is made up of well spaced and sized 15×15 mm keys, slightly smaller function keys at the top, and instead of tiny arrows, but at least they are well spaced from the surrounding keys. There is also an extra column of function keys on the right, again spaced from the main deck, and a few multimedia keys at the top to quickly adjust the volume, control the microphone, and launch Armory Crate, functions that the players like to have at your fingertips.

The keys are slightly coated and pleasant to the touch. Typing on this keyboard was fast and reliable, once I got used to the return, which is similar to most ultraportables, so somewhat familiar to me. It’ll take some extra time to get used to it if you are using an older laptop or a deeper typing keyboard, so your experience may be different from mine. 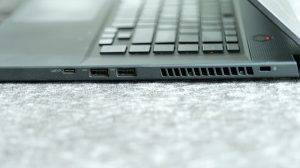 In my use of this laptop, I did not feel short of ports or connectivity options, and I did not think you would either. Also, the USB-C port is great, and with Power Delivery, it can quickly load USB-PD compatible devices, which is also cool.

For people looking for a laptop that doubles as a gaming machine, the Zephyrus M GU502 is everything. For its asking price, this laptop is perfect for designers, publishers, and content creators who are also passionate gamers. Many laptops will perform better, but they do not offer the elegance, durability, and portability that our Zephyrus M provides here.

See a “Flash Out-of-Date” Message on Safari on Mac? Here’s Fix That