Avast SecureLine VPN review: Avast SecureLine VPN has a leading antivirus company’s pedigree behind it, offering necessary VPN protection, good speeds, and a particularly diverse range of server locations. But it lacks additional privacy tools, and the price is steep. The company also collects a surprising amount of information about its customers. Avast has the core of a good VPN service, but one that needs a price correction.

And there is no zero-know DNS system, no stealth protocol to bypass VPN blocking, no sign of anything even remotely advanced. SecureLine is not bad, but it’s not excellent either. It’s more focused on being ‘just good enough.’

Avast’s support for the highly secure OpenVPN protocol using AES-256-GCM ensures a good start in the privacy effort. Since our last review, it has also been given a ‘kill switch,’ protecting users if the VPN fails and blocking DNS and WebRTC leaks.

Avast also deserves some credit for its VPN Privacy Policy, which contains many details about what is and what isn’t in the service logs. The good news is that it doesn’t include your full original IP address (the last value has been deleted, such as ‘212,100,56,000’), your DNS queries, or anything else that could identify the websites you visit, the services and applications you use, or whatever you do online.

The not-so-large news is that there is a certain amount of session logging, including timestamps for the connection, the IP address of the server you are using, and the amount of data sent. But this is not unusual, and Avast deletes it after 30 days, so for example, data logged on January 3rd will be deleted on February 2nd.

Avast’s various apps collect some necessary analytical data themselves: OS version of the device, the actions you take in the app (this feature enabled, that feature disabled, maybe uninstalled and reinstalled). However, this is standard practice, and if you don’t feel comfortable, you can disable this type of data collection in the app’s settings panel.

Avast SecureLine’s Windows client only offers five servers that it says are “optimized for streaming”: one in the UK, one in Germany, and three in the US (New York, Miami and, apparently, Gotham City – which may be the definition of a virtual server). Would that be enough to give us access to obstructed content?

We started with an attempt to access U.S. content that is only on YouTube, and the results were a surprise. We don’t remember the last time we saw YouTube block something, but we couldn’t get in through Miami. Fortunately, New York worked fine, and we were able to watch and stream YouTube clips. 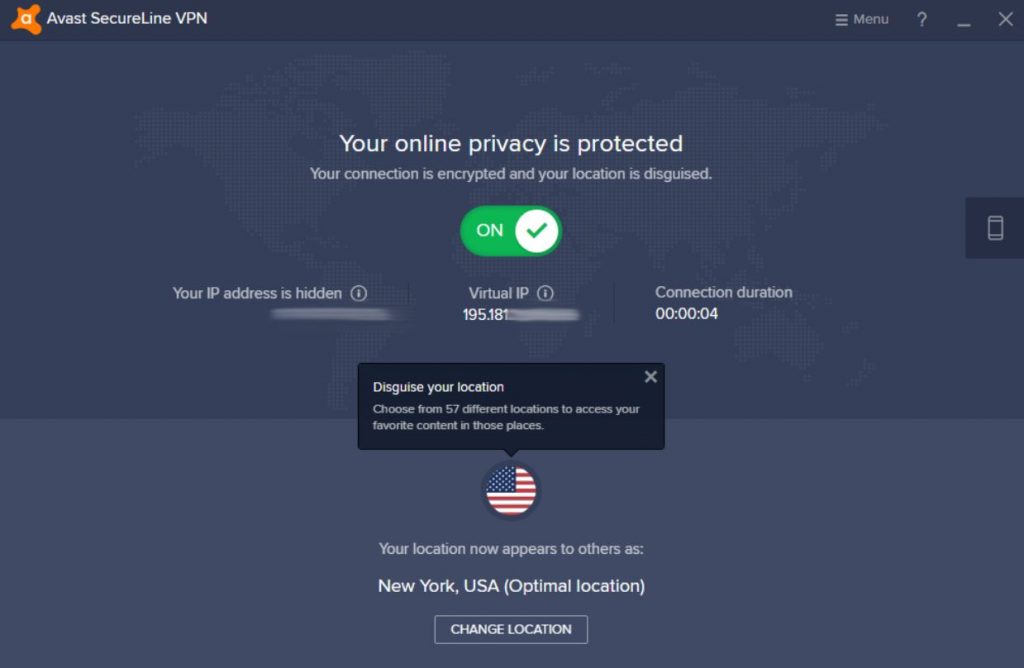 There was more success when we managed to stream American Netflix content, including via the New York server, but SecureLine failed with Amazon Prime Video, BBC iPlayer, and Disney+.

By switching to our performance tests, UK download speeds were reliable at 60-65Mbps. Connecting from the UK to nearby European countries where we would expect high performance – France, Germany, the Netherlands, Sweden – gave us virtually the same results.

We repeated our tests from a 500Mbps European data center, hoping to see precisely what SecureLine can do. The results were a little underperforming at ‘only’ 60-80Mbps, but that’s still enough to cover most situations, and of course, you might get more speed from your local server.

Pricing is much the same: $4.99 per month to protect up to 5 devices on the annual plan, and $3.99 on the 2-year and 3-year plans. We would like to see monthly billing, and it is a little strange that there is no discount for choosing a 3-year plan instead of 2, but otherwise, it looks like fair value. You can also choose to buy a single device license, but you still pay $3.99 per month on the annual plan, $2.99 over 2 and 3 years. That might be worth it if you like Avast and you are already a customer, but otherwise, it seems a little too expensive. For example, Surfshark‘s two-year plan only costs $1.99 per month and has no device limits.

However, Avast SecureLine scores for the trial period and gives you seven days to try out the full service. No payment details are required, and we didn’t even need to provide an email address; we installed the client on our Windows system.

Avast SecureLine VPN review has a strong pedigree of its antivirus roots and notches up several successes on its own, especially in the speed tests. It is also effortless and quite friendly. Unfortunately, it offers little privacy, and although the annual price is favorable compared to the competition, it lacks a monthly price option. The company also needs to repair some fences with customers and start undergoing extensive audits and retooling its VPN product to collect fewer user data.

Avast offers an easy-to-use service that delivers solid performance, but it's short on dust and doesn't really have the power to match the big VPN names.

Check Uptime of iPhone or iPad to See When Last Booted