Wireless gaming keyboards are becoming more and more common, and that can only be good. From the all-round quality of the Logitech G915 to the functional performance of the Razer Turret, cable-free gaming is more achievable than ever, whether you want to lounge on a couch or just tidy up your desk. But gaming keyboards are also very expensive, credit to their mechanical switches. The Corsair’s K57 RGB Wireless tries to split the difference. This is our Corsair K57 RGB Wireless Review. 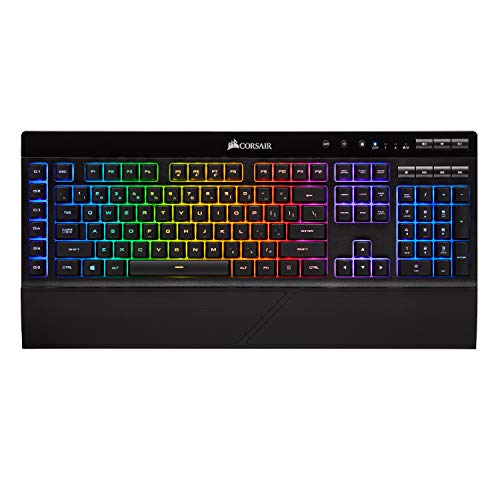 This wireless keyboard provides both USB and Bluetooth connectivity, a column of macro keys, full RGB lighting, and a full media bar, all for less than half of what most gaming keyboards cost. However, the K57 uses membrane keys, which feel mushy and insensitive as all standard office peripherals. Also, typing on it is simply not a snug experience.

First thing you have to do: The K57 is big. It measures 19.0 x 9.0 inches with the removable wrist rest (19.0 x 6.5 inches without) and is almost 2 inches longer than some other large game keyboards. This is mainly to use the extra column of the macro keys, so measure your desk before investing in one of these keyboards.

Otherwise, the K57 looks pretty simple. It has a black plastic chassis with a glossy bar at the top that collects fingerprints, like gamers collecting an unplayable steam background. There are six buttons in the extra row of buttons, and seven discrete media buttons on the top right: mute, volume down, volume up, stop, skip back, play/pause, and skip forward. I prefer volume buttons to separate buttons, but the media bar is right to have, no matter what.

There are also additional buttons at the top for macro recording, brightness adjustment, and lock buttons that can accidentally take you out of a game (such as the Windows button). The keyboard shortcuts allow you to switch between USB dongle and Bluetooth options. All in all, the Corsair K57 is a big, simple keyboard, but it’s got everything it needs.

Where the K57 falls is in its keys. This is a membrane keyboard, like the cheap Dell and Microsoft models preferred by middle managers everywhere. I have long written about why mechanical keyboards are worth your money, and I stick to my words, particularly when it comes to gaming devices. I recognize that membrane keyboards can be useful if you only have $20 or $30 to spend, but it’s hard to justify $100 on one.

In any case, the company tried to make the keys of the Corsair K57 feel better than a standard membrane keyboard, but I don’t think the attempt was 100% successful. The keys feel stiff and resistant like they’re trying to push your fingers off when you are typing. It’s passable for gaming, but it’s not very snug for typing – and when you buy a $100 keyboard, it’s reasonable to want to use it as an everyday productivity tool, too.

The K57 runs on the robust but very limited Corsair’s Utility Engine (iCUE) software. You can re-program macros, create profiles for individual games reassign keys, and programs, and customize the stunning RGB lighting.

Although I’m usually a fan of the iCUE software, the re’s something not playing nice with the K57. Re-programming keys seems a lot more complicated than it should be. And if you want to set a shortcut to one of the macro keys, you’ll have to go through an annoying macro recording menu – even for something as simple as a single keystroke or a mouse button.

But what bothers me about the K57 is that it doesn’t have the deep RGB illumination options that come standard with other Corsair keyboards. Corsair was one of the first makers to implement RGB lighting in a keyboard, and the lighting choices have always been ridiculously deep – sometimes to the detriment of a keyboard when that depth overshadows usability.

But the K57 doesn’t have any access to it. Instead, you get nine color patterns, and that’s it. Admittedly, some are pretty nice, like a rainbow rippling across your keyboard when you tap a key. And, of course, you can set any static color you want. But compared to what Corsair fans have seen before, it’s an excellent anemic selection.

In terms of battery life, Corsair estimates that you can get up to 35 hours with standard lighting and 175 hours with all lights turned off. The iCUE software does not tell you exactly how much battery the device has left. But the keyboard remained at “Battery Level: High” during my three days of testing, so that sounds about right. Both the USB and Bluetooth radio connections seemed stable, and you can even pair it with two Bluetooth devices and switch between them at will.

The K57 worked pretty well in the game, even though I never got used to the stiff feeling of the keycaps. I tested the periphery with Overwatch, Age of Mythology: Extended Edition, and Final Fantasy XIV to see how well it handled different genres, and it performed pretty well across the board.

I was able to accurately fire through my skill rotation in FFXIV, and frolic around the map in Overwatch without any problems. I don’t think the keyboard is suitable for high-level competitive play because you just can’t hit these keys in quick succession. For everyday users, it’s okay, although it will feel quite similar to any membrane model you’ve used before.

The K57 does a lot of good. It’s adorable, it has all the right buttons, and the wireless functions are flawless. But the stiff, tasteless diaphragm buttons bring the whole experience down a notch, both for typing and gaming. It’s hard to justify putting $100 on this keyboard when just $10 more, you’ll get a mechanical Corsair K63 Wireless. Similarly, you could get a wired mechanical Logitech’s G512, which also has RGB lighting, for the same price.

The Corsair K57 RGB Wireless is worth considering if you absolutely must have a wireless gaming keyboard for $100. If not, you can get many better-wired models for the same price.