A few years ago, HyperX was a brand name that only came up when you needed a streamlined gaming headset for a reasonable price. Now HyperX has expanded its range to include keyboards and mice, with virtually the same general principle. So the HyperX Pulsefire Surge Mouse is unusual in that it’s a fully-priced peripheral with as many features as comparable models in the Razer, Logitech, or SteelSeries. This is our HyperX Pulsefire Surge Review. 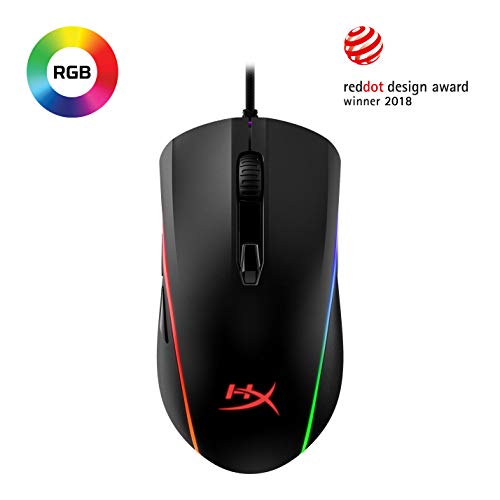 At first, I was a little disappointed that HyperX had come out with something so familiar, while the real strength of the company has always been in cutting the syrup and getting the juicy center of an accessory. However, as I used the Pulsefire Surge more and more, I found that it was no worse than any of its competitors – and, in some ways, it pushes the needle forward, at least a little bit.

Measuring 1.6 x 2.47 x 4.73-inches, the HyperX Pulsefire Surge is medium-sized for a gaming mouse. It’s not far from one of our gaming mouse favorites, the Logitech G Pro, a similar model in the same price range. It cuts some of the 1.65 x 2.79 x 5.02-inch fat HyperX Pulsefire FPS that was coming, but it also feels harder and slimmer, due to the lack of rubber side handles.

In terms of weight, the HyperX Pulsefire Surge weighs 3.5 grams without regard to the weight of the braided cable, 4.6 grams. The Logitech’s G Pro weighs 3 grams and the Pulsefire FPS 3.3 grams. Like I said, par for the gaming mouse course. The crazy visual flair comes from the fully customizable 32 lighting zones, with each zone being a little bit of the lighting that glows around the outline of the mouse. Each zone is a segment about half an inch long from the surrounding strip.

The left and right mouse buttons are fast and snappy, with little recoil to get in the way of aiming your sights and shooting fast at an enemy unit. They are backed by Omron switches that HyperX says are rated for 50 million clicks. They feel suitable for fast action games. Moving up or down a web page will give you satisfying bumps, just like switching weapons. The feedback is not too strong or too light.

Behind the scroll wheel is a resolution switcher button. By default, the sensitivity of the built-in Pixart PMW3389 sensor changes from 800 dots per inch (dpi) to 1,600 dpi and then to 3,200 dpi. In HyperX’s mouse control utility, called NGenuity, you can adjust the three settings that the button passes through, within a range from 100 dpi to 16,000 dpi. A resolution of 16,000dpi, or any five-digit resolution, is an exaggerated overkill unless you’re on a couch with large 4K monitors.

On the left side of the HyperX Pulsefire Surge, you will see two customizable buttons that, out of the box, go back and forth between web pages. You can program these side buttons in HyperX NGenuity to perform more relevant keyboard shortcuts for whatever you do or play. Of course, the shortcuts that are only on the left undermine some of the ambidexterity of this mouse, making the Pulsefire Surge less suitable for left-handed users. At the bottom of the Surge are two glossy panels that help it slide across your desk in a moment of intense action.

That’s where you can select custom lighting color profiles or search for a profile you created. Or you can choose from three preset profiles, including Wave, Cycle, and Solid, that Kingston created for you. Below that, once you have selected one of your custom profiles, you can click Customize to scroll through the Lighting, Performance, and Macros settings and customize them to your liking.

In lighting, you can choose a different color for each of the 32 zones of the HyperX Pulsefire Surge. You can also make them all the same, or you can mix and match. You can also decide whether you want to show the lighting as Solid (static) or in a Wave formation. Alternatively, you can turn the lights off completely, although I’ll say ahead of time: if you don’t like flashing lights, you shouldn’t have bought this mouse in the first place.

In the Performance section of NGenuity, as I mentioned earlier, you can change the three sensitivity levels assigned to the resolution button. It is also possible to color-code those levels in the software. The only thing is that this color coding is never seen beyond the guts of the software. If you click the DPI button on the mouse, an indicator will appear on the screen of the new resolution you have switched to, but it will not match the color codes assigned to those resolutions in the software. Another missed opportunity: nowhere on the mouse itself do these colors appear even when you change the resolution.

Finally, in the Key Mapping subsection of NGenuity’s Macros tab, you can switch between the left and right orientations and configure each button on the mouse for non-standard tasks. These include alternative keyboard functions, mouse functions, or recorded macros. If you want to set up macros through NGenuity, you can record them for yourself in the Macro Library tab, also under Macros. All you have to do is press the record, press the desired keys, click insert and then save the recording.

You would expect all of these settings to be stored only in the HyperX NGenuity software. Plug the mouse into another computer’s USB port, however, and you’ll find that the same lighting, performance, and macros you configured in HyperX NGenuity are still the re. That’s because the HyperX Pulsefire Surge has a small amount of internal memory for storing up to three profiles, although there is no clear way to choose what is stored on the mouse itself versus what is stored on your system.

The HyperX Pulsefire Surge is not packed with buttons, nor does it require an experimental approach to ergonomics. It is a classic, conservatively shaped mouse design whose “gaming” identity stems from the fact that it uses those nearly laughable 32 lighting zones. If you’re a fan of that sort of thing, this mouse delivers. Likewise, this mouse is a good value for left-handed and two-handed players, a subset of buyers often rejected by peripheral manufacturers.

However, even if you’re a right-handed player, you’ll find plenty to love with the HyperX Pulsefire Surge. It’s comfortable, has a high sensitivity range, and it shines pretty much every gaming mouse out the re. My only complaint is that the software could use some extra shine. Hopefully, the program startup issues will be resolved in a future update. For more options, check our list of Best Gaming Mouse

The HyperX Pulsefire Surge is a pleasure to use and beautiful to see, with a high-quality sensor and 32 different illumination zones.