With the ThinkPad P53, Lenovo offers a traditional 15.6-inch mobile workstation. In this case, it is usual that, unlike ThinkPad P1 of 2020, for example, it is not a very thin or very light device. In return, users benefit from faster hardware (especially in terms of GPUs), more ports, and more scalability. The ThinkPad name has long been synonymous with excellence and rightly so. Despite some of the controversial decisions over the years, the ThinkPad brand continues to represent The Best of the market. That’s why I was eager to get my hands on the new ThinkPad P53. This is our Lenovo ThinkPad P53 Review. 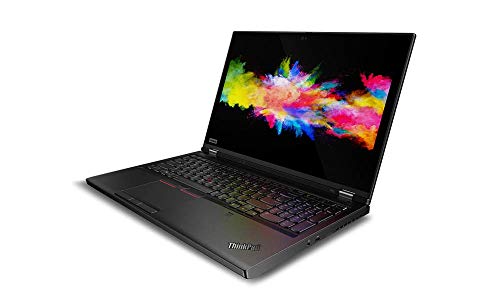 In addition to being equipped with NVIDIA Quadro GPUs to Quadro RTX 5000 and Intel Core processors as well as up to 8-core Xeon processors, the ThinkPad P53 also features NVMe PCIe SSD storage capacity of up to 6TB, DDR4 memory up to 128GB, 15 “OLED touch screen with Dolby Vision HDR and dual Intel Thunderbolt 3.

The design of the P53 has the classic features of the brand: an all-black chassis, silver hinges, and a touch of red on the mouse. This corresponds to the aesthetics of the brand and is recognized as such. About the workstations, the 15-inch form factor has many advantages. This form factor is slim, fits easily in most bags, and is reasonably sized for even the most demanding work.

To get to the heart of the chassis, the majority of the connectors are on the left and back of this computer. On the left side, there are 2x USB 3.1 ports, 1x HDMI, 1x SD card reader. The rear has 2x USB-C Thunderbolt 3, a 1x power connector, and an RJ45 connector. The right side has one headphone jack, a USB-C jack, and a locking slot. Like most ThinkPads, it is black and is made of fiberglass-reinforced polymer.

The standard ThinkPad logo is stamped in the corner of the lid. Although this is probably the most potent ThinkPad available, it does not have the same glossy black logo as the high-end X1 / P1 models.

The ThinkPad P53 model sent by Lenovo includes a 15.6-inch 1080p screen with a brightness of 500 nits, which is bright enough. The use outside is excellent, even if it is the type of machine that you take. I think it’s designed to be portable when you need it, rather than all the time. The screen also supports Dolby Vision HDR400, as well as a 72% color gamut. However, there are other display options. There is a standard 300-screen FHD screen, as in the base model, and an option for a 500-screen 4K panel with Dolby Vision HDR500 support.

But there is another, the OLED. When Lenovo updated its workstations this year, all 15-inch models offered 4K OLED options. And of course, OLED means you get real blacks and brighter colors; it is also the only display option that supports multitouch. It also helps Dolby Vision HDR500. Another thing to take into account is that everything except the OLED display model is an anti-glare screen. In other words, if you want anti-glare for your use case with this workstation, do not use the OLED option. Otherwise, you should get OLED.

The quality of the keyboard is a matter of preference, but the consensus is that ThinkPad keyboards are The Best on the market. I agree with this sentiment, and P53 helps to solidify this conclusion. The keys feel vivid and have excellent comments. Although I can juggle a long time with the keyboard, I will move to the trackpad. It’s decent.

The surface of the glass is pleasant to the touch, and the tracking is accurate, thanks to Windows Precision drivers. The dedicated buttons under the touchpad (left click, scroll, right-click) are usable, but they seem a little loose. I will note that they have never failed to record clicks. Overall, the trackpad and bottom buttons do not seem expensive, considering the rest of the machine, but they do the job.

On the other hand, the TrackPoint is excellent. The TrackPoint buttons (located above the trackpad) are more effective than the trackpad buttons. Everyone is clicky and feels robust and responsive. The orientation of the scroll button in the middle makes it easy to navigate these buttons.

The life of the battery is, however, less impressive. You can have power and battery, but you can not have both. However, you can make some adjustments. At full charge, you will probably have about two hours of battery life. In Windows 10, Microsoft offers a battery slider with four parameters.

Lenovo also provided me another solution. You can boot into the UEFI settings and switch to Hybrid Graphics instead of Discrete Graphics. If you use both options to save the battery, its life will increase considerably, but of course, it will not be as robust. The good thing is that you can use it the way you want when you need it.

The re’re some differences in the port selection and layout compared to the older ThinkPad P52. There is an HDMI 2.0 output on the left (the one on the back), two traditional Type-A USB ports, and two card readers. The nano-SIM card slot is now on the left side to be more accessible than on the inside of the battery compartment, where it used to be.

Also, there is a USB Type-C (Gen 1) port. The two Thunderbolt 3 ports are always on the back of the device. The port layout is generally correct, although the absence of a Type A USB port on the right can negatively impact the user experience in some cases. At least, there is now more space between ports, which is convenient for larger connectors.

We submitted the Lenovo ThinkPad P53 to three resource-intensive tests to see what it could do and test the capabilities of the Nvidia Quadro RTX 5000. This first test is the benchmark SPECviewperf 13, which is the world standard for measuring performance. Graphics. On professional applications.

The ThinkPad P53 is designed for professionals and engineers and is packed with security features. There are a fingerprint scanner and an infrared camera that immediately recognizes my biometric data. This is a eulogy for the fingerprint scanner; my fingers are on the fat side, and most of the scanners I use fail about a third of the time. The P53 scanner worked immediately every time I used it. The infrared camera was also fast.

Lenovo also offers variants with NFC pads and SmartCard readers for added security. The usual range of software and security hardware specific to business notebooks, including Intel’s TPM and vPro.

The Lenovo ThinkPad P53 is a mixed bag. The re’re a lot of things to like about the machine. The quality of artistry and the keyboard emit this excellent quality ThinkPad, and the screen is bright and clear. Performance is excellent for desktop replacement as long as the machine is plugged in. It’s in the little things that the ThinkPad P53 disintegrates.

The sound of the reels is simply unacceptable, especially at this price range. Low battery performance can also be a nuisance, especially for engineers and mobile designers who need to move from one workspace to another to collaborate. These employees will have to make sure there is a point of sale nearby or suffer the pain of a crippled machine.

Finally, thermal management is a bit of a concern. Lenovo may be able to adjust the fan curves with a software update, and they should. In the current state of things, the processor works much too long. When the heat eventually becomes too abundant, the silicon strangles. I would take stronger fans on a choked system. The performance results were promising for the ThinkPad P53.

We compared the P53 to a beefier 17-inch workstation, the ThinkPad P72; However, it has not accumulated, and the difference between generations of material is significant.

The ThinkPad P53 is The Best Lenovo has to offer with a 15.6-inch workstation. The machine is bulky, but it holds a ton of power in a reasonably portable case.