The Logitech Ergo K860 keyboard has recently joined the company’s ergonomic mouse category. I’ve been testing the Ergo K860 for about a week now, and while the keyboard positively encourages better hand movement habits, I found its design a little hard to get used to. Also, it introduced me to new functions that I now want to have in every other new keyboard. Typists looking for an ergonomic split-design keyboard should consider the Logitech Ergo K860. This is our Logitech Ergo K860 Review. 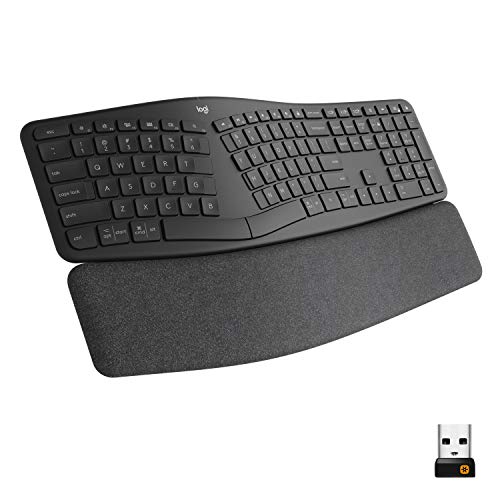 The Ergo K860 offers dual ergonomic design qualities. The split keyboard design – which splits the keys into two halves, in the middle – is designed to keep your hands and fingers in a consistent position, so you don’t have to stretch your nerves repeatedly.

That tension on your nerves, muscles, and other small parts of your hands is what ergonomic technology aims to relieve. If not addressed, poor practice can lead to repetitive strain injuries (RSI), which can lead to physical therapy. The Ergo K860 does not replace this therapy, but Logitech has had the keyboard certified by US Ergonomics, an independent company that recommends technology to avoid the need for medical intervention.

Logitech also implemented an inventive wrist-rest consisting of three layers of padding. The top-most layer is a fabric that Logitech can clean just as quickly. Beneath it, the re’s memory foam to cushion your wrists. At the bottom, the re’s a stiffer, high-density foam to provide decent support.

Under the wrist support, you have a pair of feet with two height settings: minus-four degrees and minus-seven degrees. Different height settings are standard for the back of the keyboard but new for the front. This allows your wrists to be at a proper angle, regardless of your height.

The function and media key row on the top of the Logitech Ergo K860 has some elegant tricks (although none of them are unique). For starters, you can link the keyboard to up to 3 different devices, and switch between them using select device buttons labeled 1, 2, and 3 (which have a laptop, tablet, and phone symbol next to them respectively).

I used this feature to switch between two MacBooks and an iPad Pro, and it worked seamlessly since the Ergo K860 supports both the wireless USB adapter that Logitech includes and Bluetooth for connection to secondary and tertiary devices. Of course, you also have a standard function and media keys.

To the left of the three device keys is a Print Screen button, which works differently on Macs than on PCs. A single click on a Mac creates a screenshot that replaces the Command+Shift+3 keyboard shortcut. Now I want all keyboard companies to follow this example.

To the right, there are select buttons to open the device’s calculator and lock the device screen. Thesecond button is ideal for when I need to get off my laptop at work.

I found mixed results when testing the Ergo K860 at one of the most challenging times of the year: CES. When I supported my colleagues by editing articles in the NY office, I found that I had trouble getting used to the split keyboard layout. But for the most part, my touch-typical tendencies helped me navigate the keyboard so that my wrists could stay in place.

The problem I hit was that I remembered which keys in the middle of the keyboard were on which side. These were primarily the T, G, and B keys on the left half and the Y, H, and N keys on the right half. It wasn’t the most challenging problem to overcome, but it introduced typos that I wouldn’t have made on an ordinary keyboard.

This slowed down my writing speed a bit. However, I can’t say how well other people can adapt to the keyboard layout. Logitech told me that people who used the keyboard took less than 2 days to get used to it, and 75% of users reported that comfort and posture had improved. However, the company doesn’t give any guarantees.

The Ergo K860 uses Logitech’s Perfect Stroke keyboard system, with mechanisms that provide pleasant feedback for every click. The concave letter keys are a fun touch, and I especially noticed them when my fingertips were resting on the keys. Function, modifier keys, and the space bar are convex, which is pleasant to type.

I found the Ergo K860’s multiple typing angles useful because I have a standing desk at work, and my arms fall at different angles on the keyboard. When I’m sitting, the keyboard lies flat, and when I’m standing, it’s in the higher (minus seven degrees) position, so my wrists and forearms are at a right angle.

The Logitech’s Ergo K860 keyboard costs $129, and is now available for pre-order on Amazon, shipping January 30. The keyboard will also be available from Logitech.com this month and will arrive at selected retailers next month. The Ergo K860 supports Windows 7, 8, and 10, macOS 10.13 or later, and many iOS and Android devices via Bluetooth. You can expect the Logitech Ergo K860 to last up to two years on two AAA batteries.

During the time I worked with the Ergo K860, it proved to be comfortable, but my effort to adapt to its shape negated some of the comforts it offers. If you’re searching for an ergonomic keyboard, and you’re already used to the distributed keyboard design, I’m sure the Logitech Ergo K860 will be an excellent addition to your desk. Its multiple height settings also give sitting and standing typists more options for comfort.

That said, future split-board typists may want to find one in the store to see how it feels before they connect to this device. For more options, check our list of Best Gaming Keyboard

The Logitech Ergo K860 is a good keyboard designed to improve your posture and reduce stress and strain.