The Nikon D780 is undoubtedly the best example so far of a DSLR reinventing itself for the mirrorless era. It is a very traditional looking full-frame camera with an optical viewfinder, but underneath that old-fashioned skin lies some of the same technology that you find in its advanced Nikon Z6 cousin. In other words, it is a DSLR-mirrorless hybrid. This is our Nikon D780 Review. 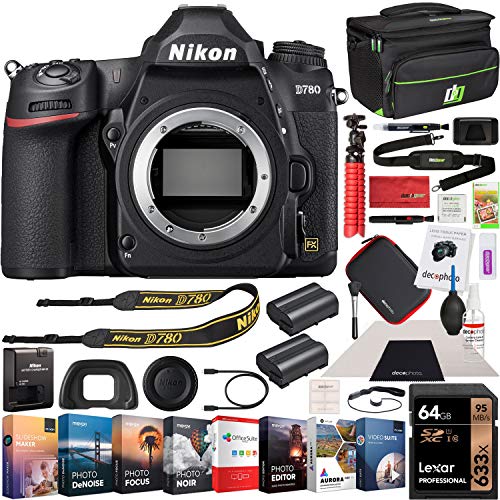 When Nikon and Canon finally took their Z-series and EOS R mirrorless systems into use, fans of optical viewfinders and the generous battery life were, of course, afraid that the time of the new DSLRs was behind them. But the D780 proves that Nikon doesn’t abandon the DSLR – if you have a stock of F-mount lenses or simply prefer the way a DSLR works, it may be one of the best full-frame cameras Nikon has made so far.

Designed to sit alongside the older Nikon D750 rather than replace it entirely, this is Nikon’s ‘entry-level’ full-frame model, which sits under the D850 and offers something for those who don’t need mega-high resolution, but still want a good all-rounder.

If you’ve always preferred the vast dimensions of a DSLR over its sometimes cramped, mirrorless equivalents, you’ll be pleased with the D780’s thick design. You’ll get a sturdy magnesium alloy housing that’s resistant to both dust and water, along with a satisfyingly firm grip. The wide range of dials and knobs also has plenty of room to breathe. The re’s no significant difference between this one and the D750, so if you’re thinking of upgrading the older model, you’re very much at home here.

Most of the shooting buttons are located on the right side of the camera. These include the on/off switch, rotary dials for changing shutter speed and aperture, and the ‘i’ button for opening a quick menu. You will also see an LCD monitor at the top, on which you can see various essential settings at a glance, such as ISO, aperture, shutter speed, and the number of shots left on your memory card. On the left, you will find the mode dial, the dial, and a set of buttons that are usually related to playback.

The use of an optical viewfinder is preferred, but if you prefer electronic versions, you should be satisfied again. It’s not as bright and clear as the D850, but if you don’t compare them side by side, you’ll probably be very impressed. If you use the screen, you have a tiltable touch screen. Using a DSLR’s Live View was a slow and painful thing to avoid unless it was necessary; nowadays, the technology has been improved so much that it is a realistic option – particularly in this case, where it offers an autofocus (AF) advantage.

The only drawback is that you have to keep the camera away from your body, which you won’t want to do with the D780 for a long time. A fully hinged screen would also have been much more convenient for video recordings, but the tilt screen (which you also find on the D750) is still handy for framing photos from high and low angles.

A disadvantage, however, is that it is a bit annoying to move between shooting through the viewfinder and working with Live View. With mirrorless cameras, that transition is immediate as soon as you move your eye towards (or from) the viewfinder.

Here you have to press a button to activate Live View – and press it again to turn it off. That may not sound like a real deal-breaker, but it can sometimes be the difference between shooting or not shooting.

The D780 is designed to be a good all-rounder, appealing to a wide cross-section of photographers. The most significant target group maybe enthusiasts, but professionals who don’t want the D850’s colossal resolution (and cumbersome file size) may find the D780 a seductive and more than a capable option. At the heart of the Nikon D780 is a 24.5MP full-frame, a backlit sensor that is tuned to the latest EXPEED 6 image processor – this is the same combination you will find in its mirrorless family member, the Nikon Z6.

Other impressive specifications include up to 12fps recording (in Live View, another specification adopted from the Z6), in-camera charging via USB, and 4K (Ultra-HD) video recording. Of course, a full-frame DSLR has a much larger housing than a mirrorless equivalent, and one of the advantages of this is the space for two memory cards – here we have two UHS-II compatible SD card slots. Viewfinders are an issue – many like the ‘shoot what you see’ style of an electronic viewfinder, but there are still plenty who prefer optical ‘finders.’

If you fall into the last camp, you’ll be happy with the 0.7x optical viewfinder here, inherited from the D750. In terms of autofocus, there are two systems in the game. The D780 uses the same phase-detection for the 273-point autofocus system as the Nikon’s Z6, but the crucial difference is that it is only turned on when shooting via Live View, instead of the optical viewfinder. Still, the system performs in much the same way as the Z6, including eye-detection AF, with the ability to choose which eye you want to focus on.

You will also notice that autofocus points cover about 90% of the image. However, if you prefer to shoot traditionally, you will get a very decent 51 points, but you will notice that they are all clustered in the center of the frame.

The D780 uses two autofocus systems, depending on whether you are shooting through the viewfinder or through the screen. This is one of the most significant differences between this camera and a mirrorless camera like the Nikon Z6.

This is probably not a camera that will appeal to sports and action photographers. Still, if you shoot something with a relatively predictable movement pattern, then it will get along reasonably well with this camera. Both AF systems are reliably fast and accurate, but when you shoot a moving subject, shooting via the screen is slightly more responsive. Primarily because when using the screen, you can shoot at 12 fps, compared to 7 fps through the viewfinder.

The fact that the D780 has two UHS-II-compatible slots is excellent news for cleaning up the buffer. You can shoot up to 68 raw files or 100 JPEGs before it needs to catch its breath. That’s not great for those in the “spray and pray” camp, but the buffer is cleared pretty quickly so you can start reshooting eruptions swiftly and on time.

Because he is now a few years old, it’s no surprise to see the technology of the more advanced D850 appear on the D780. The same 180k RGB measurement and scene recognition system is used here, which works overall to produce beautifully balanced exposures. You may need to dial in some exposure compensation in some particularly high-contrast situations if you only want to shoot JPEG, but if you are used to shooting in Raw format and then making tweaks, this will be less of a problem.

One area where DSLRs are still a lot of beat mirrorless cameras is battery life. The figures quoted here for the D780 are 2,260 shots, which far exceed those of the Z6/Z7 mirrorless cameras. That figure drops significantly if you consistently use Live View. Still, for those who shoot through the viewfinder, it’s a nice feeling not to have to worry about carrying spare batteries or finding an outlet to give it an extra boost in the middle of a crucial shot.

If you prefer the DSLR photo experience to mirrorless cameras, the Nikon D780 is a fantastic full-frame all-rounder with great appeal. Just like the Nikon D750, which remains for sale, the D780 is likely to be a popular choice for those who want to go full-frame for the first time, especially if you also want to take advantage of some of the latest mirrorless features. In several ways, the D780 is a cross between the Nikon D750 and the Z6. It has the same AF system as the latter, which is useful for shooting action scenes, while the latest EXPEED processor also helps to support fast shooting.

The D780 does not have one specific feature that is mind-blowing, and it is a pity that there is no image stabilization or built-in flash in the body. But it does have many useful, reliable, and versatile features that make it suitable for a wide variety of photographers. That’s it for our Nikon D780 Review.

The Nikon D780 is one of the best full-frame options out the re. It combines great image quality, weatherproof construction, excellent battery life, and modern autofocus skills.

Welcome to compsmag.com an online Tech Publisher based on technology and reviews. The Purpose of this Tech Portal is to provide and sharing of technical information, Product Reviews, insights, events and strives to educate you on how technology can enhance and enrich your life by providing you information, opinion, and advice on what to buy and how to get the most out of it.
@2020 compsmag