Compsmag is supported by its audience. When you buy through links on our website, we may earn an affiliate commission fee. Learn more
Reviews » Lenovo ThinkPad P40 Yoga Review
Reviews

For those who are looking for a laptop that can deal with severe 3D modeling, CAD work or other demanding professional graphics duties, Lenovo ThinkPad P40 Yoga is a mobile workstation with discrete Nvidia Quadro graphics. Selecting a mobile workstation means carrying a relatively cumbersome system and forgetting all about convertible designs. The Lenovo ThinkPad P40 Yoga packs sufficient power for AutoCAD and also bends back 360 degrees to transform into a tablet, complete with an active stylus. This 14.1-inch laptop is a reliable alternative for engineers, animators or researchers who typically need a powerful convertible workstation which is easy enough to travel with. 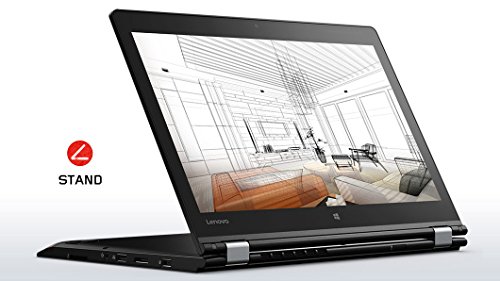 The Lenovo ThinkPad P40 Yoga has the identical raven-black ThinkPad aesthetic as nearly every other ThinkPad, with splashes of color offered only by the red TrackPoint pointing stick on the keyboard and the blinking status light on the logo. The lid is made out of a blend of carbon fiber and plastic, whereas the body is made of plastic.

Just like the Lenovo ThinkPad X1 Yoga and Lenovo ThinkPad Yoga 260, the Lenovo ThinkPad P40 has two tight hinges that help it to bend back a full 360 degrees, thus transforming it into a tent, tablet, or stand modes. Lenovo’s laptop also features a Lift n’ Lock keyboard, which retains the keys from pressing when the system is not in laptop mode.

The ThinkPad Yoga P40 has a big range of ports but disappointingly lacks the Ethernet port. The right side houses an HDMI-out port, two USB 3.0 connections, a mini DisplayPort, a Kensington lock slot and the power button. The left side houses an SD-Card reader, Lenovo’s OneLink+ docking port, an audio jack and a third USB 3.0 port.

The keyboard on Lenovo ThinkPad P40 Yoga offers a comfy typing experience. With 1.8 mm key travel, the keys are deeper than those on the HP ZBook Studio (1.5), the X1 Yoga (1.7), and the Dell Precision 5510 (1.3). The keyboard’s backlight was more than brilliant enough at both high and low settings.

Just like almost every other ThinkPad, the Lenovo ThinkPad P40 Yoga has a TrackPoint pointing stick between its G and H keys. As all the time, I found the stick extremely correct and appreciated having the ability to navigate around the desktop, without lifting my palms off the home row.

In case you don’t like the little red nub, you will admire the P40 Yoga’s 3.5 x 2.1-inch touchpad. Whether drawing figure eights in Windows Paint, clicking on an icon, or highlighting textual content in Google Docs, the buttonless pad offered precise movements, without a hint of jerkiness. Multi-touch gestures such as pinch-to-zoom and three-finger swipe worked flawlessly.

Like other latest ThinkPads, including the Yoga 260, the Lenovo ThinkPad P40 Yoga includes a stylus. Known as the ThinkPad Pen Pro, this 4.5-inch long pen lets you sketch on the screen with 2,048 levels of pressure. At less than an ounce, the stylus felt light in my hand, however pressing the tip against the display for writing or sketching felt a bit slippery. I had a more paper-like experience with the same pen on the Yoga 260 and with the thicker stylus on Microsoft’s Surface tablets.

Lenovo includes its WRITEit app, which lets you handwrite instantly into any textual content area in any application. Not like many different devices that include pens, the P40 Yoga includes a built-in bay for storing and charging the stylus. Lenovo claims that placing the pen into the bay for just 20 seconds supplies 19 hours of juice.

The bottom-facing audio system on the Lenovo ThinkPad P40 Yoga put out loud, rich sound that was loud enough to fill two adjoining rooms in my house and good enough for real music listening. The included Dolby Audio software allows you to manually set the equalizer or select between profiles for Music, Movies, Voice or Gaming. We discovered that songs sounded best in Music mode, although Dynamic mode, which adjusts the output based on content, was also good.

Our review unit of Lenovo ThinkPad P40 Yoga is powered by Intel Core i7-6600U CPU, 16GB RAM, 512GB SSD and Nvidia Quadro M500M graphics. It’s no surprise, then, that Lenovo’s laptop solely dealt with everything we threw at it, together with an intense multitasking session with 14 Google Chrome tabs open and a Full-HD video playing in another tab. However, it’s also not shocking that more powerful workstations that aren’t 2-in-1s scored a lot higher on our tests.

The Lenovo ThinkPad P40 Yoga stayed cool throughout our tests, but it didn’t necessarily stay quiet. After we had streamed a Full-HD video for 15 minutes, the laptop’s touchpad measured just 79 degrees Fahrenheit. The keyboard clocked at a cool 83.5 degrees whereas the underside hit only 95 degrees Fahrenheit. But, while I was using the laptop to surf the web, I often heard a subtle but scratchy fan noise. Most laptops have some fan cooling mechanism, but usually, I don’t notice the sound except I’m performing an intensive task.

With enough juice last for about two-thirds of a typical workday, the Lenovo ThinkPad P40 Yoga trails different 2-in-1s and 14-inch workstations by a wide margin but is just a bit better than other mobile workstations. The P40 Yoga lasted 6 hours and 35 minutes on the battery test, which involves continuous surfing over Wi-Fi. That’s far behind the Lenovo ThinkPad X1 Yoga (7:52 for Core i7 model). However, the HP ZBook Studio G3 (5:08) and the Dell Precision 5510 (5:34) lasted over an hour less.

The Lenovo ThinkPad Yoga P40 delivers on a unique worth proposition as it is a 2-in-1 on which the graphics professionals can compute intensive work. Along with its robust efficiency and even stronger build quality, Lenovo’s laptop benefits from a nice display, a comfy keyboard, and great stylus support.

In case you want the very best performance, think about getting a nonconvertible 15-inch workstation like the Dell Precision 5510 ($1,399 to begin), which comes with a fast Xeon CPU and Quadro M1000M graphics. On the other side of the spectrum, Lenovo ThinkPad X1 Yoga is way lighter and lasts much longer than the Lenovo ThinkPad P40 Yoga, but it doesn’t have Quadro graphics or as fast a Core i7 CPU. However, if you would like a 2-in-1 that’s enough to run the 3D-modeling software and flexible sufficiently to sketch on, the Lenovo ThinkPad P40 Yoga is your most suitable option.