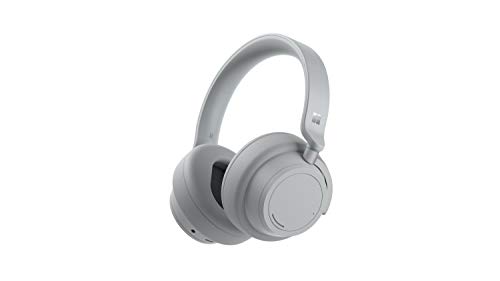 “Functional, not flashy.” That’s the motto when it comes to Microsoft and its sound hardware. The company has made no changes to the original Surface Headphones, except that it has left the consumer with a choice between matte black or light gray color schemes. For the rest, it is business as usual. The headphones consist of a mix of aluminum and plastic. The extensions and yoke are made of metal, while the rest is plastic, and the ear cups are made of black leather and memory foam.

If you look at both sides of the lower part of the headband, you’ll see an embedded shiny Microsoft logo. You’ll find all the buttons along the right auricle, including power and mute. You also get a USB Type-C port and audio input on that side. The other buttons are cleverly embedded in the ear cups (more on that later).

The Surface Headphones 2 was a bit stiff when I turned on the over-ear cans for the first time, causing a bit of pressure around my ears, caused by the oval auricles. But after about 20 minutes, the headphones loosened up a bit, and it was smooth. I was quite surprised that I didn’t feel any pressure while wearing them. They’re not as light as the Bose Noise Cancelling Headphones 700, but I wore the Surface Headphones for four straight hours without any discomfort, except for the first 20 minutes.

The first time you turn the Surface Headphones on, they’re ready to pair up when the beautiful woman’s voice informs you. After you go to the Bluetooth menu and press the pair, that sweet lilting voice turns into a cold robot voice. In my case, I was told that the cans are now connected to my Samsung Galaxy Note 9.

Just like the 1st gen Surface Headphones, the new touch controls have been built into both ear cups; a quick tap in the middle of one of the ear cups plays or pauses whatever you’re watching or listening to. The cans also have an automatic pause function that stops music as soon as you remove the headphones. A double-tap will skip a song forward or answer a phone call, while a triple tap will skip a song back or end a call. To reject a call, press and hold the earcup. This is also used to call your digital assistant.

Speaking of digital assistants, unlike its predecessor, Surface Headphones 2 is not dependent on Cortana. When you call your digital assistant now, it will be your usual program. So on the Apple iPhone XS Max, I used Siri and Note 9 called the Google Assistant.

I haven’t been an MS Office 365 user for a few years, but the Surface Headphones 2 makes me want to reconsider that decision. Just like the Surface Earbuds, the Surface Headphone 2 allows you to do fun things with certain Office 365 programs. For example, the cans can be dictated in Microsoft Word in real-time with reasonably good accuracy. Of course, there were a few issues, but that’s to be expected with most dictation software. The function even worked when I turned up the volume of my LG TV.

And because I couldn’t get enough of the sound of my voice, I tried the Live Captions function in PowerPoint for a spin. As the name suggests, the function uses Earbuds’ dictation function to create captions in real-time, so that the people in the back of the room, who can’t hear you, can read and follow you. Just like the dictation function in Word, my words are transcribed almost as fast as I’ve said them. And when I presented to a crowd that spoke another language, Live Caption can translate in real-time into more than 60 languages, similar to Google Translate.

And finally, for you, Outlook users, Surface Earbuds can read your emails to you if you use the iOS app with the Read My Email feature.

The Microsoft Surface Headphones 2 has a total of 13 levels of active noise cancellation, just like the originals. At the maximum setting, Surface Headphones 2 attenuated my television properly and silenced it entirely with the volume at 15. The Bose did slightly better by muting the TV to 20. I walked past a group of children during my daily walk in the neighborhood. When I turned the Surface Headphone 2 on, the ANC made it so that I could barely hear their impetuous conversation even before I started listening to music.

But now and then you might want to hear what’s going on around you, like when my friend tried to tell me the statistics about the boxer he was watching. For those moments, you turn the ANC all the way down until you hear that cheerful woman’s voice announce that Ambient Noise Control had been kicked in. As the name suggests, Ambient Noise Control allows you to set the amount of ambient noise filtered into the soundscape.

The Bose has the same technology called Transparency Mode. When enabled, I could hear the commentary from the boxing match I was watching while listening to Chizzy Stephens’ “Catching Villians” at 50% volume level.

The Surface Headphones 2 have 40mm Free Edge drivers, which the company claims deliver Omnisonic sound, a feature designed to provide an immersive experience. I haven’t determined whether omnisonic is a buzzword or not, but what I can tell you is that the Surface Headphones deliver rich, balanced audio that doesn’t lean too heavily on the bass or treble.

When I listened to Javier’s “Crazy,” with the equalizer on flat, the sound image was a bit tight. The bass guitar was a bit aggressive, but it wasn’t enough to drown out other parts of the track, like the strings, the synthy keyboard, the cymbals, and the drum. The low end was a much more refined on the Bose, of which I also flattened the equalizer. That reluctance gave the more delicate instruments of the tracking room to breathe, and I had a pleasant time switching between focusing on the individual parts of the track and the beautiful tenor of the singer.

Then I played Jay-Z’s “Guns & Roses,” which is mainly built on Lenny Kravitz’s electric guitar, drums, and what sounds like a guiro. The Microsoft Surface Headphones 2 did a great job reproducing Lenny’s licks and his scratchy delivery to the hook, and it conveyed the bragging flow of the rapper. The Bose was able to deliver more details because I could hear more of the hectic guitar tweets, but it was undoubtedly a more distant performance, even though both headphones were set to 50% volume.

The last song I played was Sade’s “Jezebel,” in which I enjoyed the artist’s lamentation, accompanied by an acoustic guitar, then a sad saxophone and keyboard. The soundstage is so forward-facing that I feel like I’m standing right in front of the artists. Again, the Bose gave a productive, more detailed performance that allowed me to appreciate the finer points of the track; however, it wasn’t as warm as the Microsoft Surface Headphones 2.

Microsoft has ANC enabled Surface Headphones with an estimated lifespan of 20 hours. This corresponds to the Bose. I used the cans for two days to listen to Tidal, watch The Toe Bro videos and take calls. Even after all of that, I still had 10 hours of battery life left. If you need to recharge in no time, 5 minutes provides one hour of battery life with a full charge after 2 hours.

The Surface Headphones can be connected to a wide range of devices thanks to Bluetooth 5.0, which has a claimed range of 800 feet. I left my smartphone in my bedroom with the door closed and could listen to my music wherever I was in the house. I even ended up in my backyard without any problems. However, the connection became a bit fickle when I entered the hallway of my apartment building to take to the street.

Credit to the integrated microphones, taking and receiving calls on Surface Headphones 2 is a pleasure. I called several times on the cans, and no one could see that I was using headphones. Each caller described loud, pure sound without echo or background noise, unless, of course, I was standing on the street and an ambulance or police car passed by. Whether I was at home in front of the TV or walking down the street, I heard my callers.

These are first-class headphones! With the Surface Headphones 2, Microsoft has achieved the high goals we expected from the originals, without making too many changes. With the adjustable ANC and Ambient Noise Control, you can control how little or how much noise you leave inside. The sound is warm and sometimes a little forward, yet still delivers a great listening experience. Touch controls are easy to master, and you get a lot of productivity functionality.

Sure, Microsoft hasn’t made any drastic changes to the design, but as comfortable as the cans are, I don’t have any complaints, especially with the competitive price tag of $249. But if the silence is golden, and you prefer it delivered in a sleek, stylish package, you should go with the Bose Noise Cancelling Headphones 700. For just $50 more, you get the gold standard in Noise Cancelling as well as a pair of headphones that are incredibly comfortable and deliver balanced, detailed audio.

However, for the Microsoft fans, the Surface Headphones 2 is undoubtedly worth buying.

Wallpapers for iPhone +: Review And Features

Wallpapers for iPhone +: Review And Features